When I reread the latest session..

Laura said:
A: There is a match between future and present frequency.
Click to expand...

..I was reminded of that crop circle. Also, everything feels 'in between' lately, like on that depiction.

Its a crop circle mrtn,however, this one was made by terrestrial being. Nothing extra.

FOTCM Member
I was searching information on Sun Spot's and if there was any activity to correspond to the recent black-out in Argentina and came across this article of a Crop Circle that appeared in France, in Saint Hippolyte on June 13, 2019. The article has a "dramatic" headline and there is a rebuttal towards the end of the article.

June 14, 2019 - The French crop circle was presented in two phases, the first with our solar system and the second phase the asteroid itself, and the asteroid path’s striking the Earth itself. 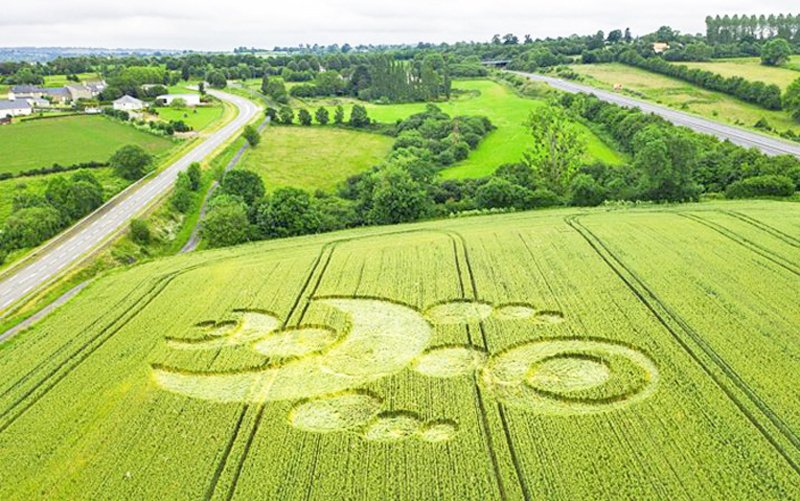 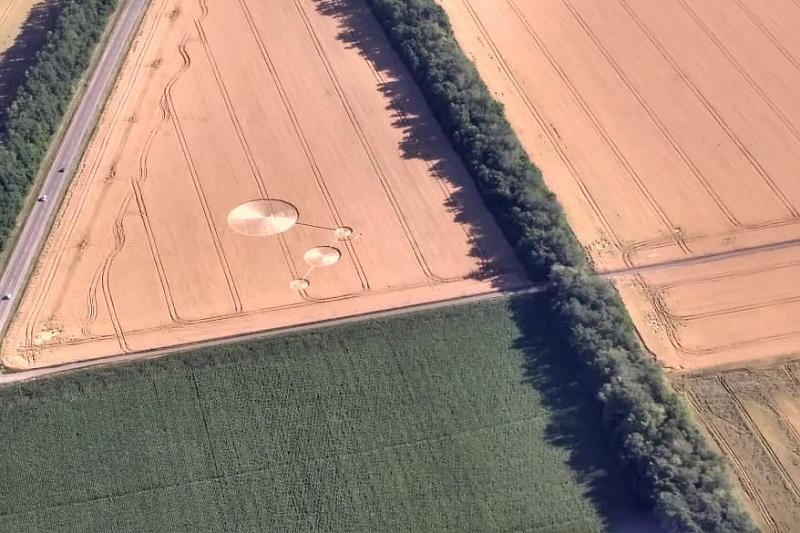 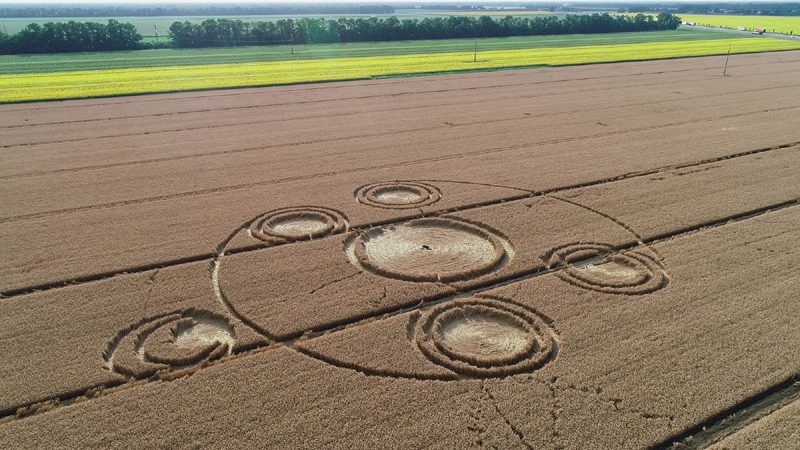 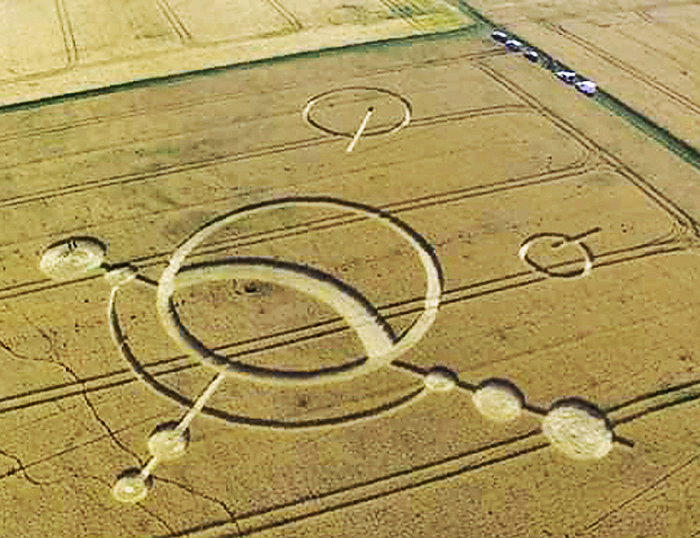 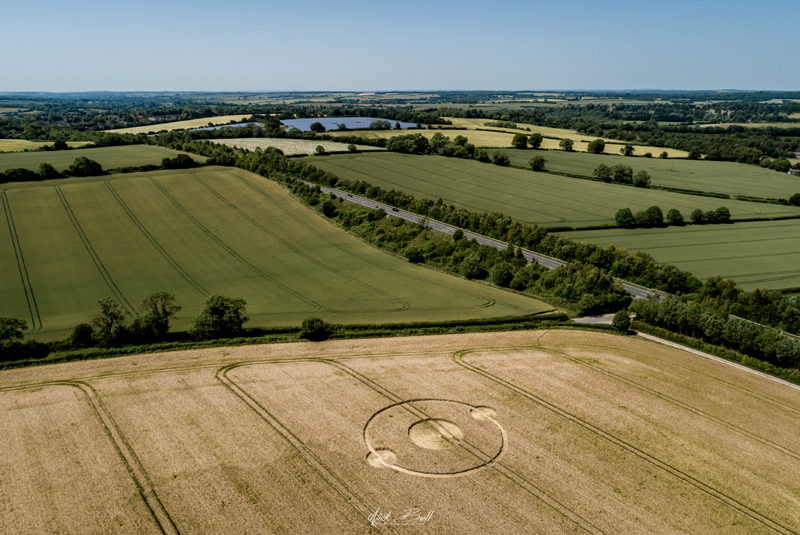 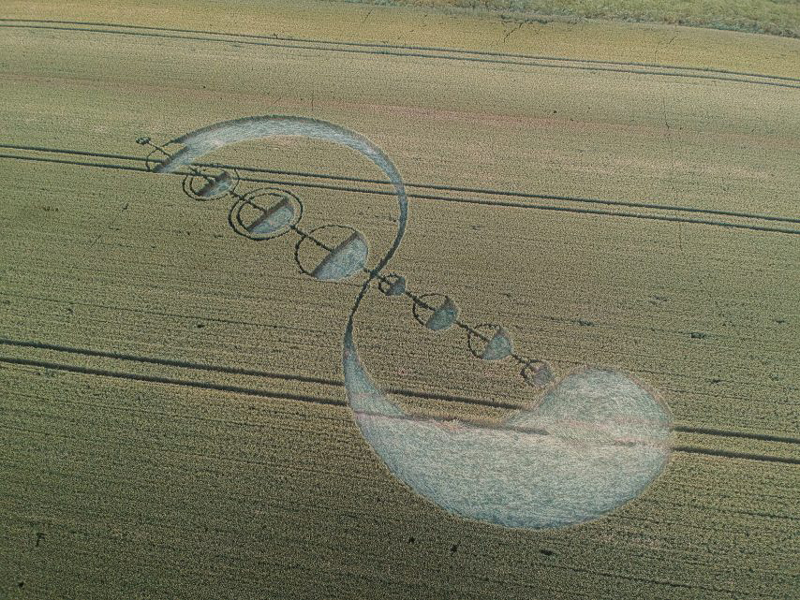 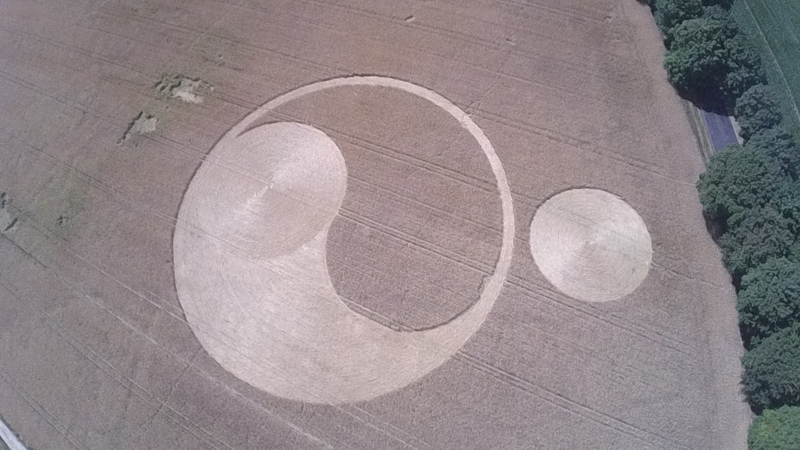 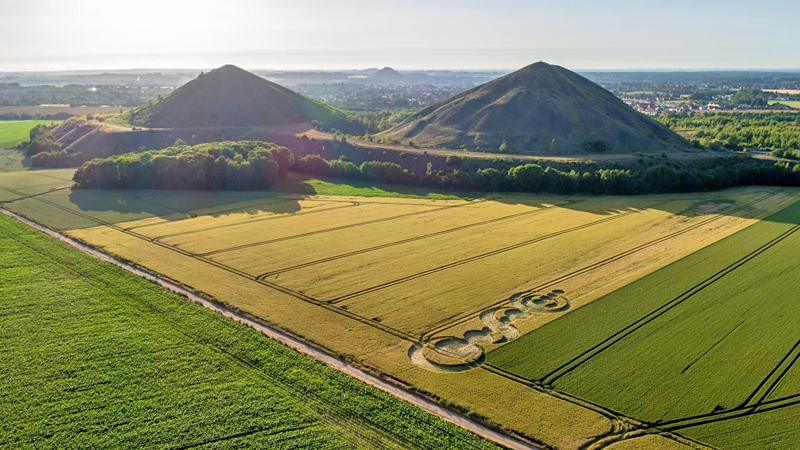 A lot in France. Does France get its grace period now?
There were some others and smaller ones too.
I did not look into July yet.


When I reread the latest session....I was reminded of that crop circle. Also, everything feels 'in between' lately, like on that depiction.
Click to expand...

Good grief, mrtn, you can't be serious! Sorry, but Harmony99 is 100% correct. Just look at the shoddy crop-lay, its all over the shop... Very poor workmanship. Christ, look at the right 'circle' at 2.00 mins in... Its like a squashed satsuma FCOL!
The same goes for most the French ones you've added since.

I don't think y'all giving it the thumbs up have been wearing your BluBlockers?

BlackCartouche said:
Good grief, mrtn, you can't be serious! Sorry, but Harmony99 is 100% correct. Just look at the shoddy crop-lay, its all over the shop... Very poor workmanship. Christ, look at the right 'circle' at 2.00 mins in... Its like a squashed satsuma FCOL!
The same goes for most the French ones you've added since.

I don't think y'all giving it the thumbs up have been wearing your BluBlockers?

I just posted what's going on. I find many of them suspicious too. As for the first one, did you read the 'Field Report'? And what you pointed out about the right circle looks like normal interference with the tractor tracks to me.
Just letting play your gut feeling and your need for perfection and grandiosity and then coming to a conclusing that is '100% correct' is not how I approach this.

mrtn said:
Just letting play your gut feeling and your need for perfection and grandiosity
Click to expand...

Its not me saying that, its the C's: "meticulously meticulous" or "with meticulous meticulousness"... Or something like that.

Also bear in mind, hoaxers know now not to leave board marks. In fact, I may go so far to say some genuine circles in times gone past may have had COINTELPRO agents go in first-doors and deliberately flatten with boards after the fact, to throw off the scent and sow confusion.

Ambassador
FOTCM Member
Linda Moulton Howe just posted an article on her website about what she's calling a 'ghost' crop circle. On further investigation it seems that what was a normal crop circle this year (July 2019) - where the circle is visible from the crops being flattened - they're now visible (video form October 2019) due to the crops being a fresh green surrounded by browning crop. Both videos as a comparison are posted in the article below.

Is it an artifact of the former crop circle? The creation of the first changed the crops/soil in some way? Not sure. I don't think i've come across something like this before.

“This is absolutely breathtaking. May I inquire how the depressed image is green while the rest of the crops are yellow/brown? Its sooo amazing and beautiful!”

October 30, 2019 Rodfield Lane, Hampshire, U. K. – A week ago on October 23, 2019, U. K. videographer Nick Bull from Stonehenge Dronescapes reported on YouTube this drone video of a vivid green “ghost crop circle” that has mysteriously emerged in fresh-looking plants even though it’s the end of October. There are no crops in the fields, trees are turning colors and their leaves falling to the ground before winter snows.

So How? Why? is this beautiful crop pattern emerging on the bare earth field as if it were spring? 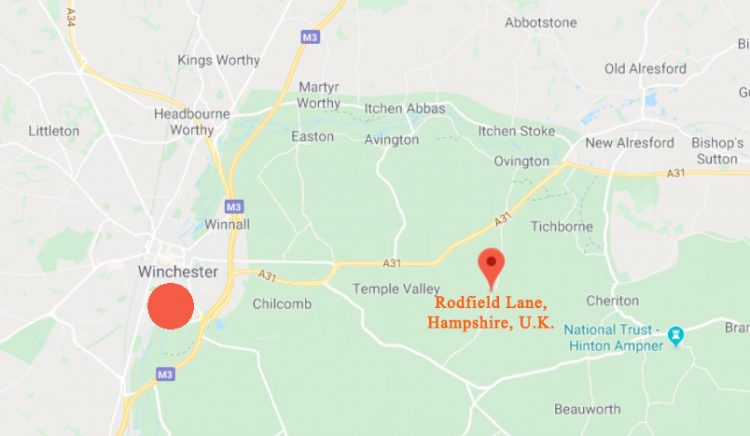 Rodfield Lane, Hampshire, U. K., is only 6 miles straight east of Winchester, where one of the first big cycles of crop formations began in the 1970s. 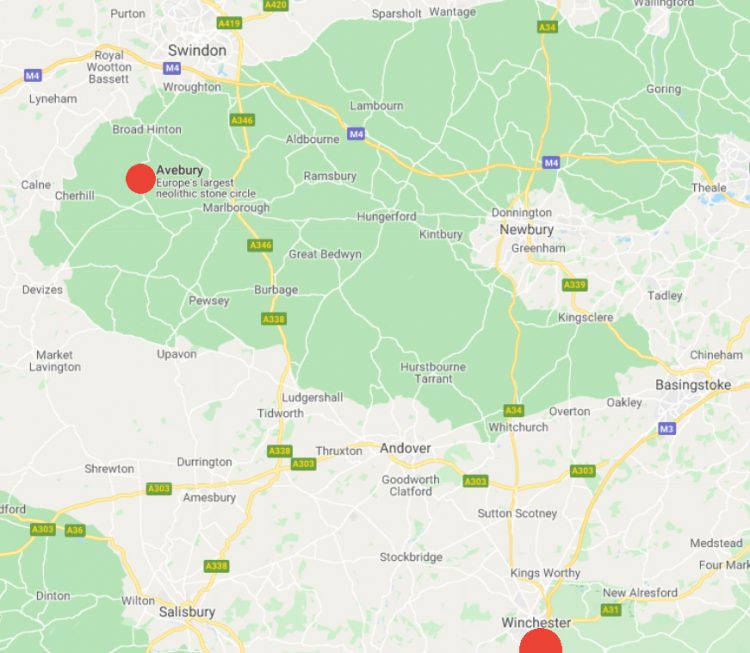 Nearly half of all crop circles found in the U.K. in 2003 were located within a 9 mile (15 km) radius of the Avebury stone circles. Avebury is Europe’s largest and one of the most complex Neolithic stone circles, dating from 2850 B. C., at least 4,800 years old. Avebury is about 50 miles northwest of Winchester.

What Are “Ghost Crop Circles”?

I began investigating crop formations on location in England back in 1992. I loved walking through the gorgeous crop fields, dragging my fingers over the seed heads of wheat or barley or oilseed rape. 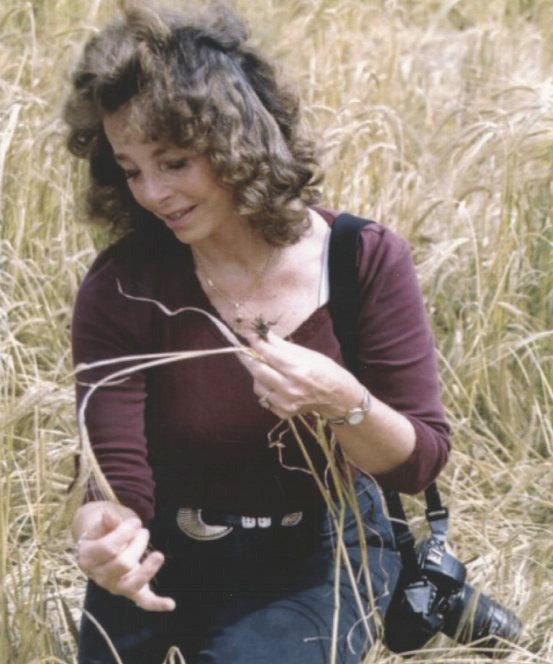 Once in awhile when spring returned, I would be surprised to see that an exact pattern that had been in the field the summer before would leave a pale trace in the same field the following year. That’s why they were called “ghost” patterns. 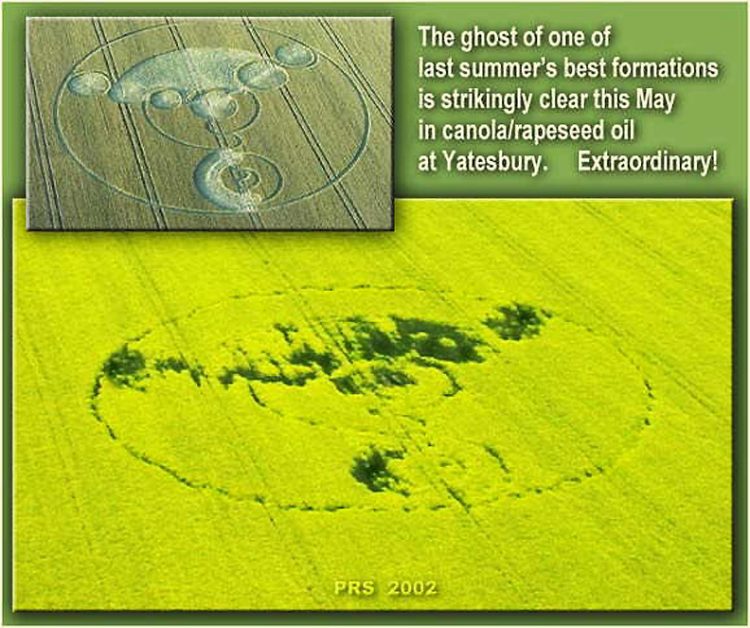 But never have I seen before a beautiful, rich green pattern of new crops rising out of a barren fall/ winter field — until Nick Bull and his drone camera captured this beautiful, mysterious, fresh green pattern on October 23rd. If anyone watching tonight has any information about how this spring pattern of fresh, growing crop could happen in a fall field, please email me at: earthfiles@earthfiles.com.

I also want to thank my longtime dear friend, Gill Nicholas, in Devizes, England, for sending me the beautiful drone video. Gill and I have walked miles in crop formations since 1992 and felt odd presences in some fields and seen mysterious lights in others.

Over the 1989 to 1999 decade, there were more than 2,000 formations reported worldwide. By the summer of 1999, researchers and European residents who have followed the mystery for several years were speculating more about other dimensions, parallel universes and time travelers. But why would crop fields be the medium? And why so widespread in England, France, the Czech Republic, Germany, the Netherlands, Spain, Italy, Japan, Australia, the United States, Canada, Russia, Peru and other countries?

Who? How? Why? are questions that provoke any mind that has seriously studied the formations, their repetivie geometries and fractal themes, the biochemical and biophysical changes not found in known hoaxes that include heating by microwave energies; increased vigor and accelerated growth in some plants, less vigor and retarded growth in others; magnetic anomalies in soils; and disturbances in cameras, tape recorders and batteries that cause equipment to stop operating.

What are the mysterious lights and glowing spheres seen so often around crop formations? Why are their physical and chemical changes in affected plants and soil? Biophysicist W. C. Levengood studied hundreds of plant and soil samples and reported there was evidence that spinning plasma vortices had interacted with the crop.

What unknown trigger released them? Could low-energy plasmas with microwave frequencies produce the physical impacts on soil and plants and leave images of mysterious lights and glowing spheres on videotapes and photographs? Are the mysterious lights an unidentified natural phenomenon? Or supervised by an advanced intelligence, which humans have yet to encounter?

Could the lights be connected to the same ancient intelligence, which inspired other marks around the world in ziggurats, pyramids, mounds and stone circles?

“This is absolutely breathtaking. May I inquire how the depressed image is green while the rest of the crops are yellow/brown? Its sooo amazing and beautiful!” — KarmaReCycled81, October 23, 2019, about remarkable fresh green crop growing in a circular formation on brown, bare, harvested field...