FOTCM Member
Happened to catch this on Through the Decades this evening. Couldn't help but note the differences between this very real incident and the orchestrated fake Pentagon strike. In this case, a single engine Air Force fighter jet with a short wing span, yet notice the damage to the hotel:

INDIANAPOLIS -- Thirty years have passed since tragedy struck near the Indianapolis International Airport.

On October 20th, 1987, an Air Force jet attempting to make an emergency landing, crashed into a bank and then a hotel near the airport, killing ten people. 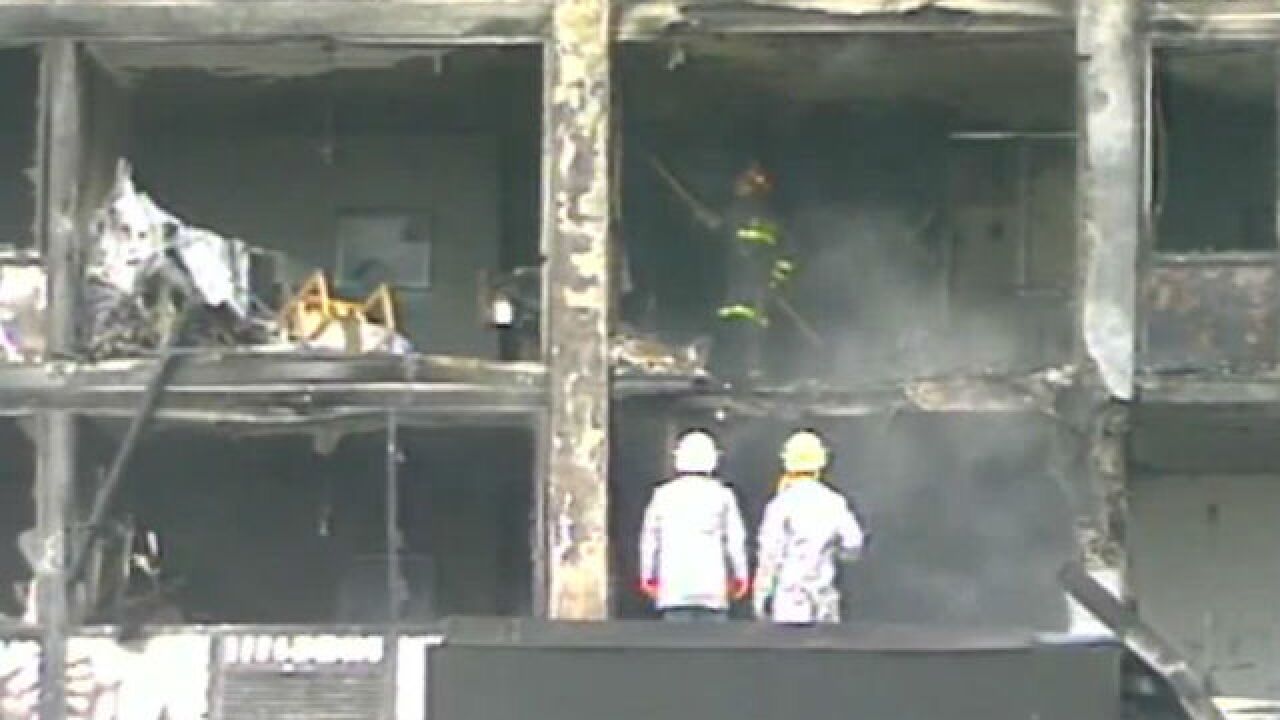 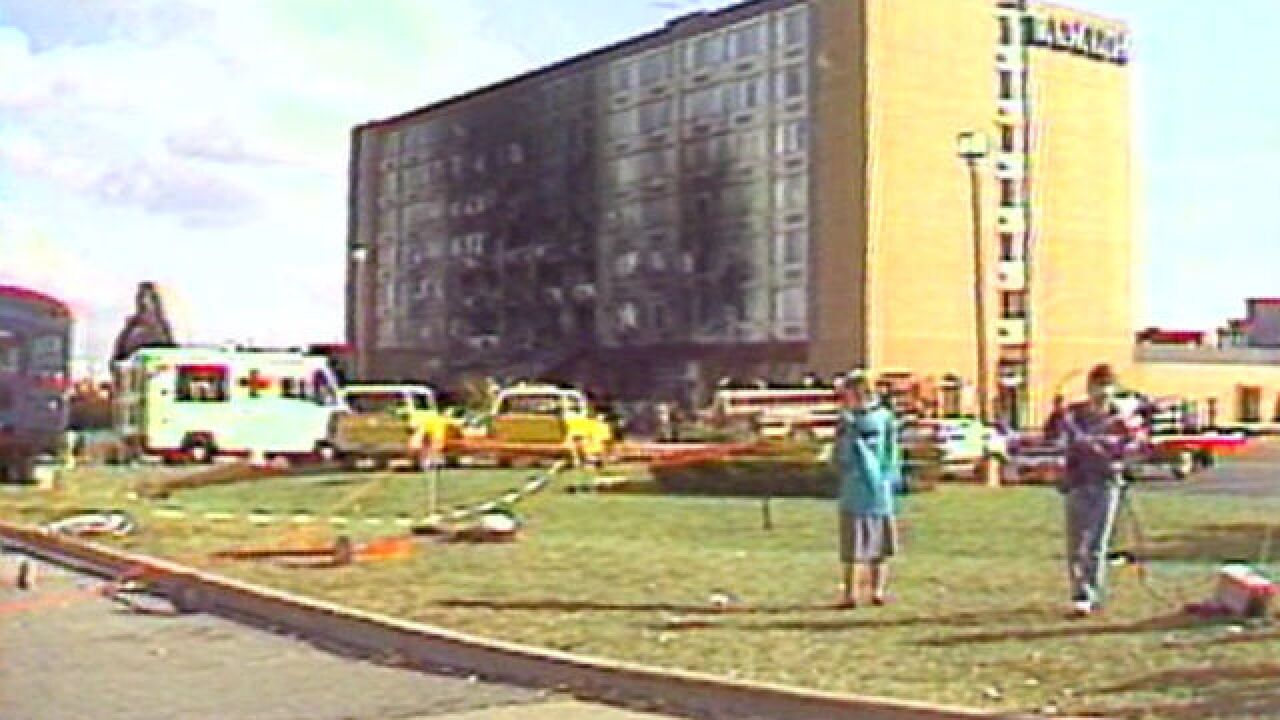 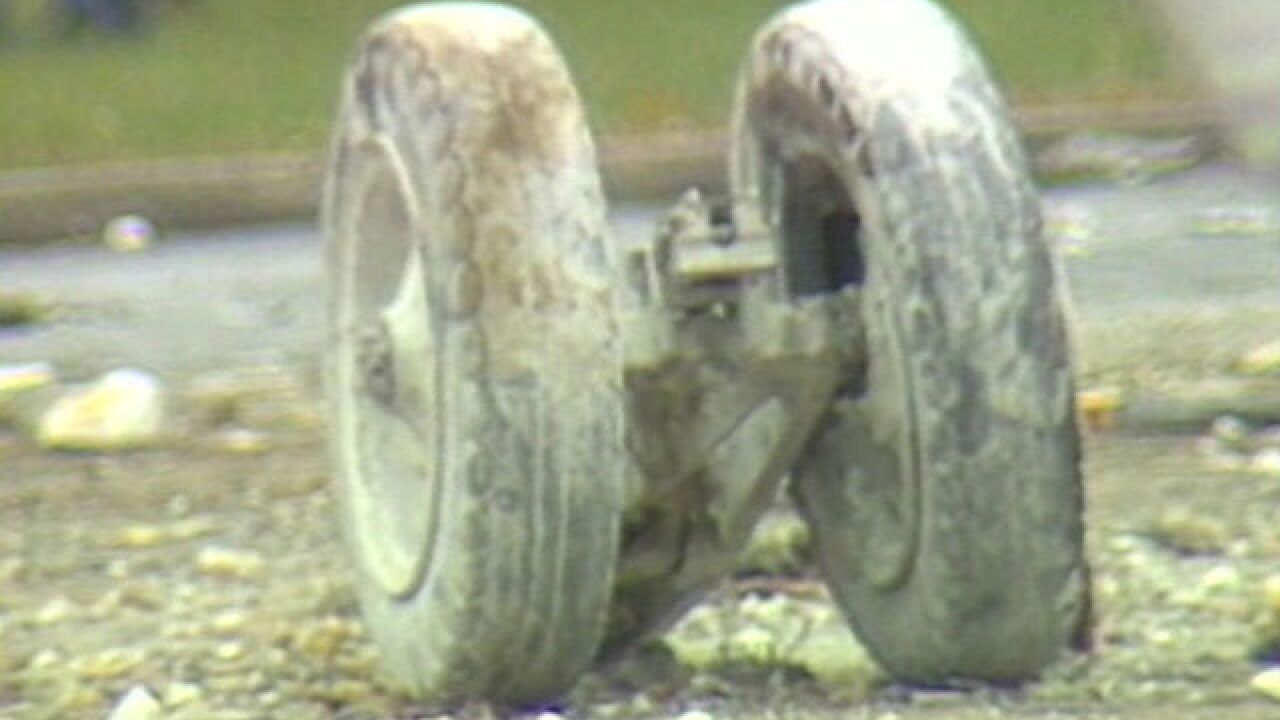 The tragedy began to unfold early that morning during pilot Maj. Bruce Teagarden’s flight from Pittsburgh to Las Vegas. While near the Ohio border, Teagarden reported an engine problem and headed to Indianapolis to make an emergency landing.

Cloud cover hindered Tegarden’s landing and he overshot the runway. The jet clipped a bank and then crashed into the Airport Ramada, engulfing the building in flames.

Witnesses say they saw the plane having trouble before the crash.

"We saw a big ball of fire," one witness said. "Everything was shattering around. We got under the table. I grabbed my briefcase and ran out the back door of the hotel."

Teagarden successfully ejected from the aircraft before the crash.

The charred remnants of the hotel stood for two years before being demolished. A parking lot is all that remains at the crash site.

Click the video player above to watch RTV6's coverage of the event. 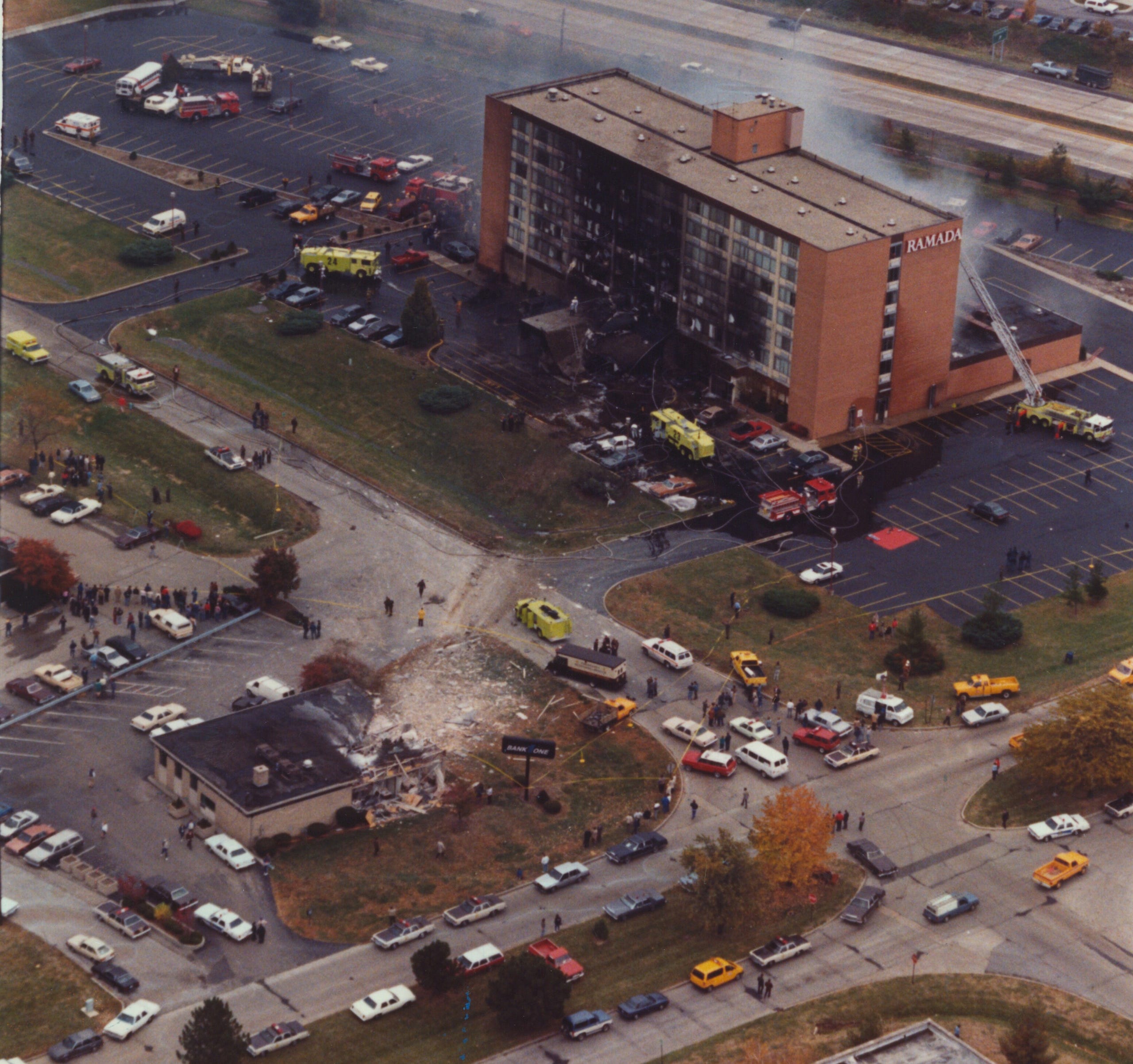 An aerial shot of the destruction caused when a military jet crashed into the Ramada Inn near the Indianapolis International Airport on Oct. 20, 1987. In the foreground is the Bank One branch where the jet bounced off the roof.
The plane's jet fuel ignited in the crash sending a fireball that enveloped the front of the hotel up to its fourth floor.
STAR FILE PHOTO 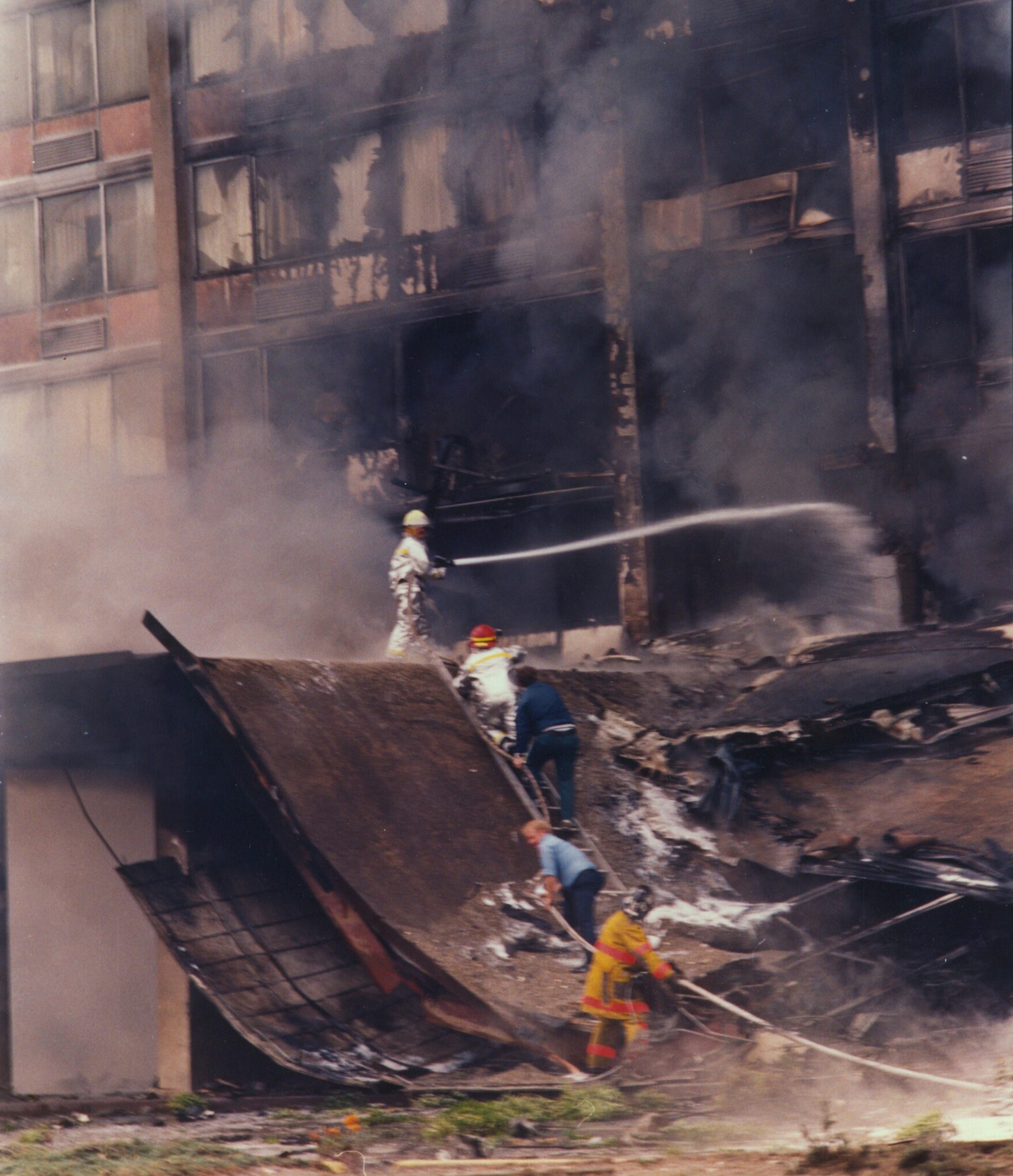 Firefighters battle the fire that erupted on Oct. 20, 1987 after a plane crashed near the lobby entrance of the Ramada Inn.
STAR FILE PHOTO 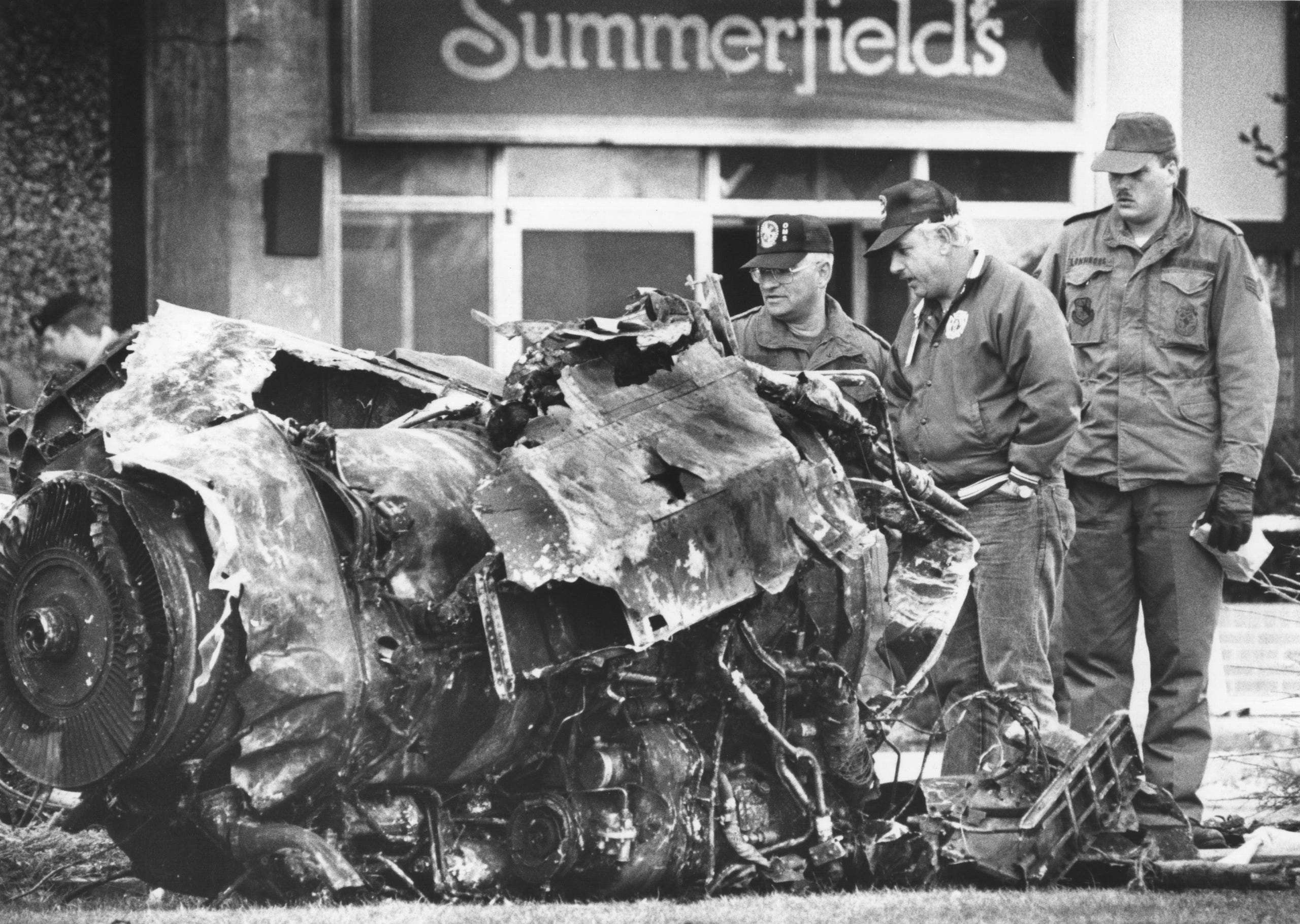 Aviation experts study the remains of a military jet that crashed into the Ramada Inn near the Indianapolis airport on Oct. 20, 1987.
STAR FILE PHOTO 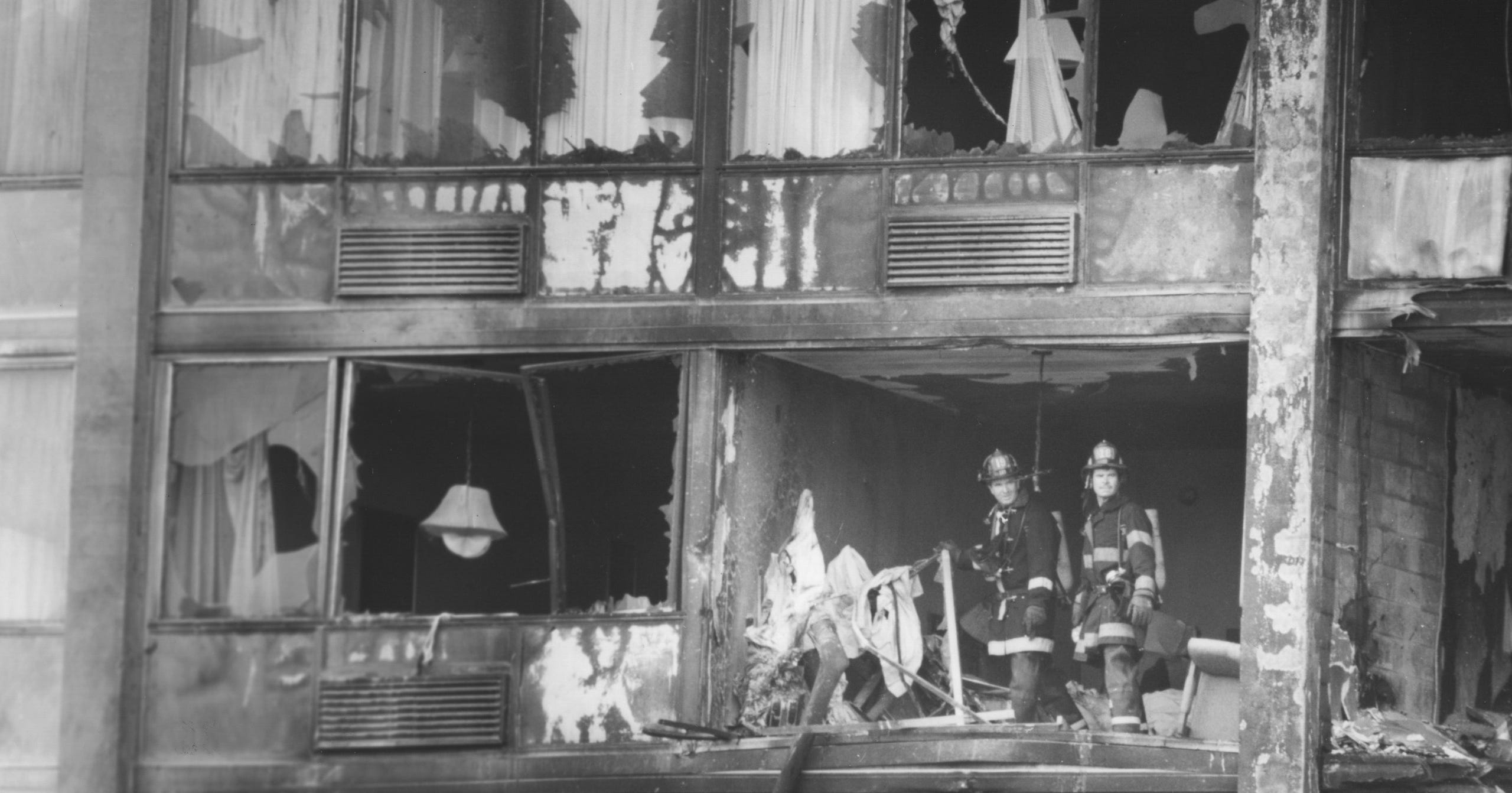 Above pics from:
The Indianapolis Star 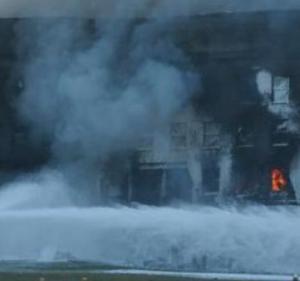 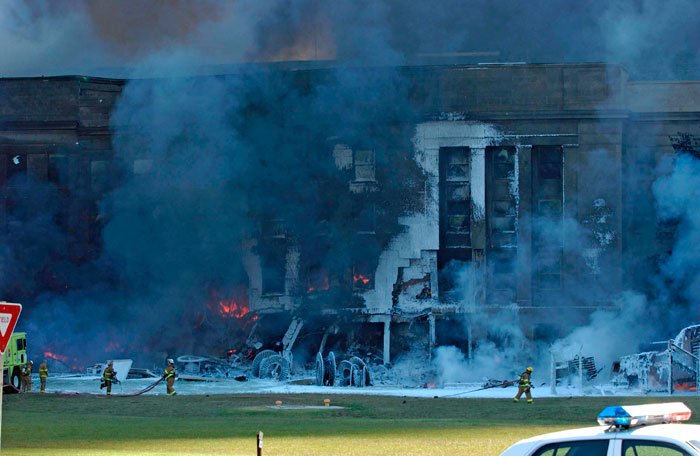 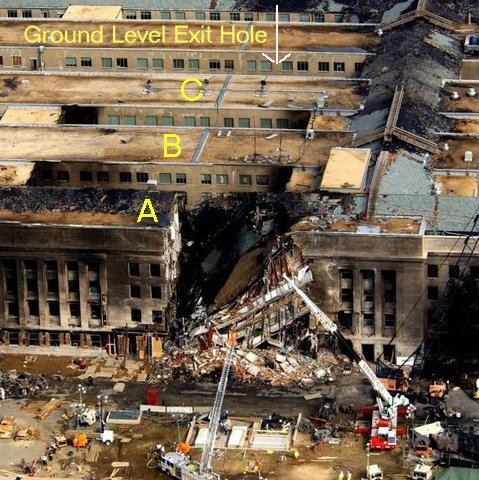 The subsequent 'impact' damage - article contends a missle rather than AA 77 hit the Pentagon.

Most of the above pics from:
Unbelievable New Pentagon Pictures from 9/11

From another article about the Ramada Inn crash:

But those gathered near the lobby were not so fortunate. The plane disintegrated on impact, with parts of it hurtling 75 feet into the hotel, said Larry Curl, Wayne Township deputy fire chief.

''It looked like it was exploding from the inside. There was a sheet of flame, then an explosion,'' said Shirley Heaton, an employee at Indiana National Bank, across the street from the Ramada Inn.

Lori Leisen, secretary for H.L. Yoh, a technical service firm across the street from Bank One, said: ''I saw something real big and dark come in front. I heard the explosion and saw the fireball.'' Windows of cars in the parking lot blew out from the intense heat, she said.

''There wasn`t anything we could have done. The heat was atrocious. It was a holocaust,'' she said.
[...]
McCue said the Vietnam-era fighter had lost its thrust and was gliding when it went down.

There were cars at the Pentagon that incurred the same mysterious burning as those in New York:

A reported 1400 vehicles were damaged on 9/11. [ Reference] These vehicles had peculiar patterns of damage and some were as far away as FDR Drive (about 7 blocks from the WTC, along the East River). Vehicles had missing door handles for example, windows blown out, window frames deformed, melted engine blocks, steel-belted tires with only the steel belts left, and vehicle front ends destroyed with little or no effect on the back end of the vehicles. What could have caused such extraordinary damage? Portions of cars burned while paper nearby did not. 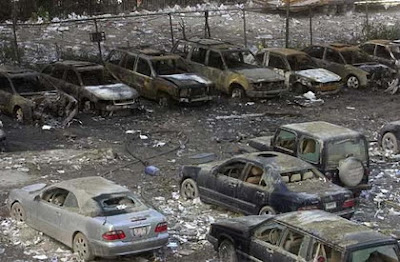 The cars parked in the back suffered extensive damage. The car on the left and on the far right look like they have had their engines eaten. The cars in the foreground experienced less damage, but many windows are missing, however partial and whole windows also remain. 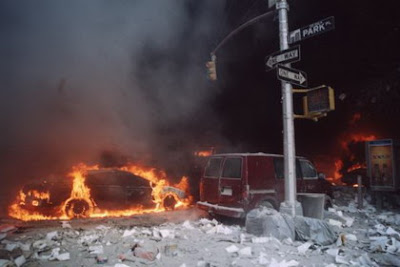 The tires and even the pavement under the car are on fire. The windows appear to be intact with no visible interior fire. There is line of fire along the trunk lid. The right front fender is deformed and has turned white.

"Oddly enough, there were also toasted cars at the Pentagon on 9/11."

So not just blown out windows although some vehicles still had their windows. Great array of vehicle pics in that article. Some cars at the Ramada were heavily damaged, but not 'toasted'.

But, you know, sometimes crashed planes just don't make that big of a mess: 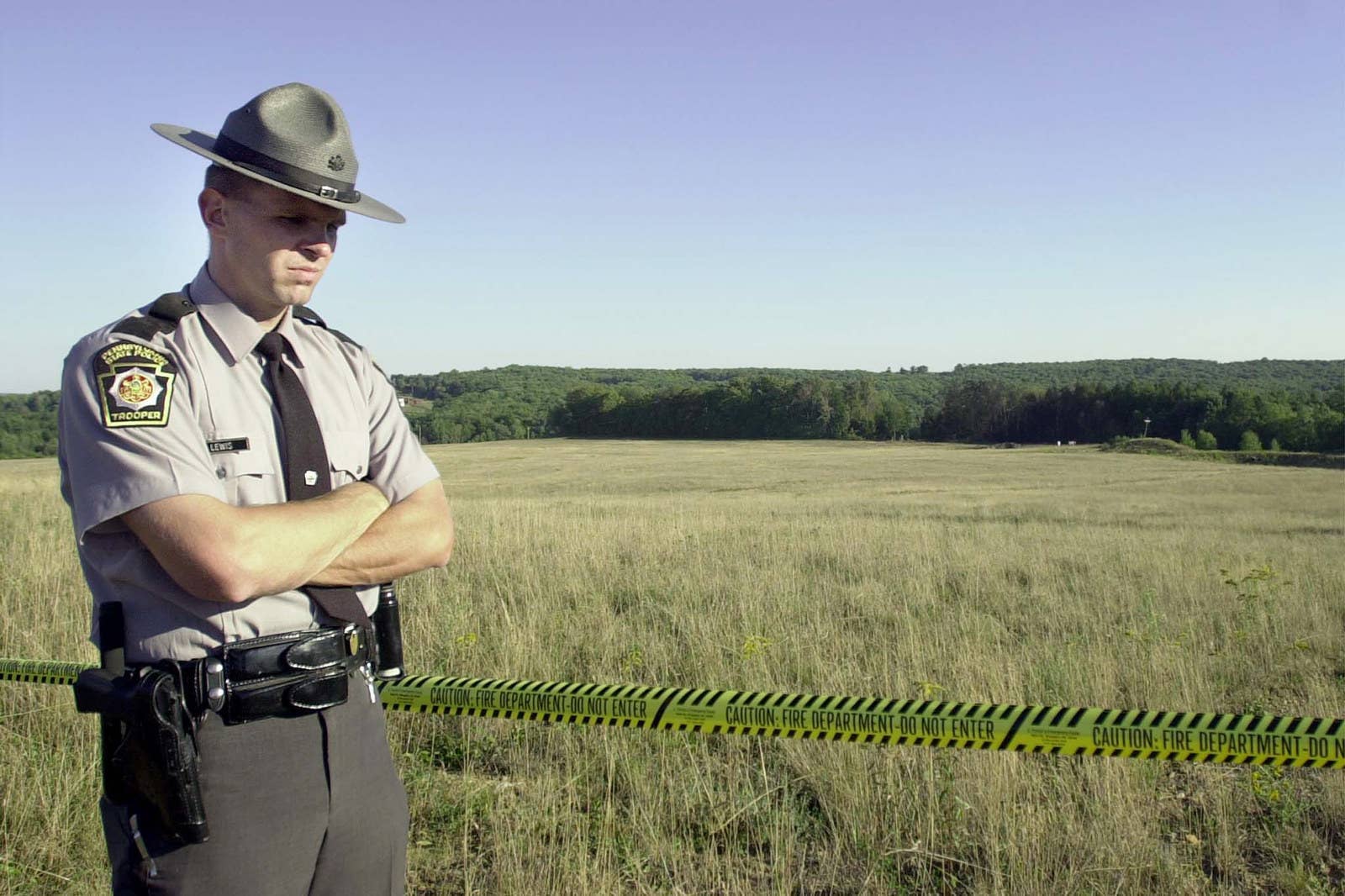 An unidentified Pennsylvania state trooper stands guard at the crash site of United Airlines Flight 93 in Shanksville, Pennsylvania. The mound of dirt in the center of the field is the crater made by the plane's impact.

Wondering if this trooper is contemplating the tragedy of this crash as well as the other 911 attacks or questioning what he was seeing vs what he was being told.