Moderator
FOTCM Member
This caught my eye because it's not the first time ambroxol appears to be quite the ideal medicine to detox cells.

A drug first discovered over 50 years ago and long used as a medicine for coughs and respiratory illnesses appears to show promise in treating a very different kind of sickness: Parkinson's disease.

A drug first discovered over 50 years ago and long used as a medicine for coughs and respiratory illnesses appears to show promise in treating a very different kind of sickness: Parkinson's disease.

Ambroxol, an active ingredient in cough mixtures since the 1970s, has been investigated in recent years for its apparent potential to halt the progression of Parkinson's, and already this year, the drug has passed two important milestones that may bring us closer to a much-hoped-for treatment.

Last month, a multi-institutional team of researchers led by University College London (UCL) reported the results of a small Phase II clinical trial suggesting that ambroxol was safe and well-tolerated in human patients with Parkinson's disease, while hinting at possible neuroprotective effects that need to be examined further in subsequent trials.

Based on these outcomes, last week funding was announced to continue the next steps in evaluating ambroxol in a much larger cohort of people with Parkinson's, while also seeking to learn more about how individual patient genotypes may contribute to the disease.

"The ambroxol study is important because there are no treatments available for Parkinson's that slow, stop, or reverse [it]" says Simon Stott, deputy director of research at The Cure Parkinson's Trust, one of the bodies funding the research program.

"All of the current medications only deal with the symptoms of the condition – they do nothing to delay the progression of Parkinson's."

In the latest open-label trial, 17 patients with the disease were monitored while taking a daily dose of ambroxol over a six-month period.

In addition to checking that the therapy was safe at the dosage administered, the researchers also wanted to see whether ambroxol would cross the blood-brain barrier, and how the therapy might play out differently between patients either with or without particular mutations in a gene called GBA1 (the glucocerebrosidase gene).

Such GBA1 mutations are considered the most important genetic risk factor for Parkinson's, with the gene variant predisposing people to a greater risk of developing the disease at a younger age, and with a more rapid onset of symptoms.

Scientists think this happens because the mutation inhibits the natural release of glucocerebrosidase proteins (called GCase), which perform a clean-up process in the brain, preventing the harmful build-up of another kind of protein called alpha-synuclein, viewed as a key culprit in the cognitive dysfunction we see in Parkinson's case.

"By increasing levels of GCase, ambroxol allows cells to remove waste, which would ideally keep cells healthier for longer and could slow down the progression of Parkinson's," says lead researcher and neurologist Tony Schapira from UCL.
Previous experiments with human cells and animal models suggests ambroxol can help increase GCase proteins while reducing alpha-synuclein levels, which is why the venerable cough syrup drug carries much hope as a potential treatment for Parkinson's disease.

We're not quite there yet, as the results from this new trial will need to be replicated in much larger tests, but the signs, the researchers say, are promising so far.

"This study provides us with the 'proof of concept' that we can raise levels of GCase in humans with ambroxol, and that the drug is safe and well tolerated in people with Parkinson's," says Stott.

"If further study shows ambroxol can improve the health and function of cells, it may result in slower disease progression for people with Parkinson's."

In the study, the experiment showed the drug successfully penetrated the blood-brain barrier, and increased GCase protein levels in participants' cerebrospinal fluid by about 35 percent, while being safe and well-tolerated by the patients taking the therapy, with no adverse effects reported.

The researchers did not find a difference between the responses of patients who do have the GBA1 mutation, and those who do not - another aspect of their results that will require further investigation.

Additionally, assessments of the patients' capacity for physical movement on the Movement Disorder Society Unified Parkinson Disease Rating Scale (MDS-UPDRS) saw the participants' movement scores slightly improve by a number of points on average, suggesting that the drug might have positive effects on motor control in Parkinson's disease patients.

That's a big 'might' though, as the researchers emphasise testing MDS-UPDRS scores was only one of many secondary outcomes in this small trial, which did not involve placebos being given to a control group.

Because of such limitations, the team says further testing is needed before drawing firmer conclusions about the effects of the drug on movement and other Parkinson's symptoms.

"However, the changes support the clinical impression that no substantial deleterious effect of ambroxol was observed among participants taking ambroxol, including any adverse effect on the motor features of their Parkinson's disease," the authors note.

With the newly announced funding to support the next stage of research into ambroxol, it will assist the drug to move forward into phase III trials. The first step, to be led by Schapira, will be to determine the optimal dose of the drug.

The findings are reported in JAMA Neurology, and you can find out more about the ambroxol trials here and here.

Editor's note (19 Feb 2020): A previous version of this article contained some erroneous information about the next stages of research; this has since been amended.

Administrator
Moderator
FOTCM Member
I've been taking ambroxol for awhile now since Gaby told me that it was sold over the counter in Spain. I discovered it when tracking down information about my PMM2 mutation. I can't cite what all I found in sequence, but the basic story is that the PMM2 gene codes for a transport protein that carries cellular waste into the lysosomes to be recycled. If half of your transport proteins are defective, obviously, waste builds up in your cells and that leads to inflammation.

I started to study the lysosomes and learned that a handy medication called ambroxol was very helpful in potentiating their activity and could, theoretically, help with detox of cellular waste. Ambroxol also deals very effectively with mucus and that is one of the side-effects I have had for years: endless mucus production.

So, Gaby brought me some ambroxol and I started taking it and I'm still taking it and it works very, very well. My inflammation markers in blood tests are the lowest they've been in many, many years.

I don't have any risk for Parkinsonism, but it was interesting to learn that ambroxol works for that, too. I also learned that it potentiates antibiotics in the lungs and other mucus producing tissues. So, if you have a lung infection and are taking antibiotics, ambroxol will make your medicine work more efficiently.

FOTCM Member
A medicine against mucus production would be handy - one annoying thing I have. Unfortunately (and very predictably) it is not available in Australia.

nicklebleu said:
A medicine against mucus production would be handy - one annoying thing I have. Unfortunately (and very predictably) it is not available in Australia.
Click to expand...

Yeah, like so many other things including my favourite cigarettes.

I'm aiming to leave and move overseas within the next couple of years. At least in Europe if you can afford it you can buy it. Here, your life can depend on it and you can only get a shitty replacement which is costly and doesn't do the job.
Makes me gag when they call it the lucky country.

Gaby said:
A drug first discovered over 50 years ago and long used as a medicine for coughs and respiratory illnesses appears to show promise in treating a very different kind of sickness: Parkinson's disease.
Click to expand...

Ambroxol for Parkinson's and cell detoxification? Just wow. This has to be incredibly good news for so many, and kind of reminds me of the use of IV Vitamin C for cancer and other such treatments that are far, far better than the usual cocktail of crap that most people get prescribed for serious illness.

FOTCM Member
Thanks for sharing.
Very interesting. It seems this product is available in Mexico but not in the US.

FOTCM Member
Interesting why they don't sell Ambroxol in USA. Because no company can make money over it.

It was patented over 30 years ago and the patent is expired. Given its age, it's unlikely that safety studies done at the time would meet the FDA's current requirements. It may not be enough of a profit center for any single drug company to bother with the clinical trials that would be needed to pass the FDA. -
posted by The Elusive Architeuthis at 1:46 PM on November 14, 2014

Ultimately, the answer is likely "nobody thinks they could make money off it." Which is a pity, because reading up it sounds like the stuff is a million times better than Mucinex (which is just time-release guaifenisen, nothing special) and I want to get my hands on some.

It is really really expensive to get a drug through FDA validation, certification, etc etc.
posted by Lyn Never at 1:53 PM on November 14, 2014
Click to expand...

FOTCM Member
Wow! That's impressive! It's also sold over the counter over here. I might give it a try.
B

An interesting thing i've just found. Below is the translation.


Most of us throw away the thing that is between two walnut pieces. In fact we shouldn't throw it away at all. It resembles much to the lungs by the appearance. Collect and save them without throwing them away. Because, when you boil a pinch of them with a cup of water for 2-3 minutes, you get a natural antitussive and expectorant. You should absolutely try it. You'll see the benefits. Every medicine has detriments for the human body beside the benefits. Nevertheless, this natural medicine has no detriments or side effects. 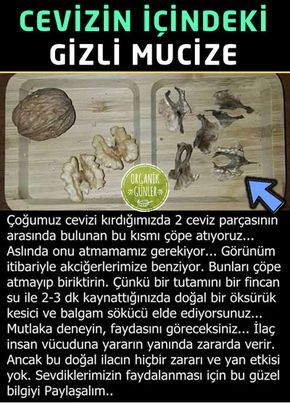 Bosphorus1982 said:
An interesting thing i've just found. Below is the translation.


Most of us throw away the thing that is between two walnut pieces. In fact we shouldn't throw it away at all. It resembles much to the lungs by the appearance. Collect and save them without throwing them away. Because, when you boil a pinch of them with a cup of water for 2-3 minutes, you get a natural antitussive and expectorant. You should absolutely try it. You'll see the benefits. Every medicine has detriments for the human body beside the benefits. Nevertheless, this natural medicine has no detriments or side effects.

Yes, I have read something about that a while back but didn't delve deeply as there were so many alternative medicine topics to look into. Thanks for the reminder.
B

stellar said:
Yes, I have read something about that a while back but didn't delve deeply as there were so many alternative medicine topics to look into. Thanks for the reminder.
Click to expand...

Aprox. US $1.70 per 100 ml here for the generic. Strangely some places require a scrip others don't.

on_strike_usaexpat said:
Aprox. US $1.70 per 100 ml here for the generic. Strangely some places require a scrip others don't.
Click to expand...

I prefer the pill form.

Ambassador
FOTCM Member
Ambroxol is very popular in Russia. If a child is coughing, inhalations with Ambroxol will be among the most popular recommendations by Russian pediatricians, and the same goes for adults too. Ambroxol may come under different commercial names, for example, I have two bottles at home at the moment, Lazolvan and Ambrobene.

Ambassador
FOTCM Member
The following link give around 3 pages of different brand names for Ambroxol if that helps find it:

I've also found it called Broxol on eBay.com.au - but it's an equine product and the listing doesn't give concentrations. 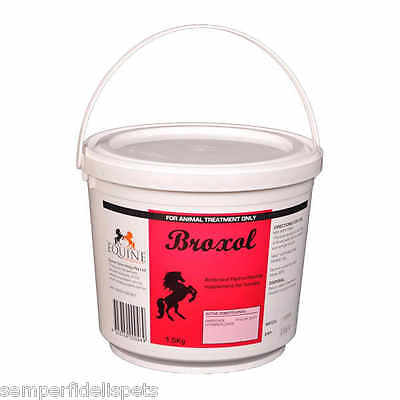