FOTCM Member
Mikhail Klodt - Village in the Province of Orel:

FOTCM Member
Two paintings of Scotland and its wonderful lights:

Zzartemis said:
"The producers and promoters of modern art form a veritable mafia that is made up of an international network of art galleries, museums, universities, critics and auction houses. Governments at the national and provincial levels also support this genre by subsidizing artists and related exhibitions, thus contributing to the distortion and imbalance of the masses. Art should elevate people's feelings, arousing in them appreciation and admiration for the beauty of classical forms and noble deeds. The so-called modern or contemporary art is nothing more than the manifestation of an unbalanced society uprooted from nature by the pretentious and perverse intellectuals of Gramscian formation who control the media and the educational system of our decadent society. So, it is used as a weapon of cultural degradation. The awareness of this is the duty of every good citizen and every lover of beauty and dignity."

I think my just posted comment fits with what is said above.
To use the word unbalanced is an understatement.

Transgender "out of the blue" - a new kind of Gender Dysphoria

Swinging the censer (botafumeiro) at the Catholic cathedral of Santiago de Compostela, Spain. It is supposedly the largest censer used in a church. It crosses the nave and into both transepts of this cathedral. This is usually done in the Mass for the Pilgrims and has been done for centuries.
Click to expand... 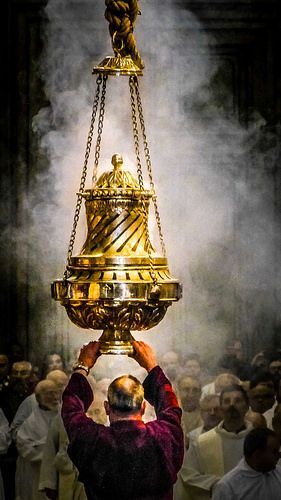 Interesting beyond beautiful art, this map drawn by John Emslie in 1850 depicts comets and aerolites which illustrates some of history’s most famous comets. Source: BigThink 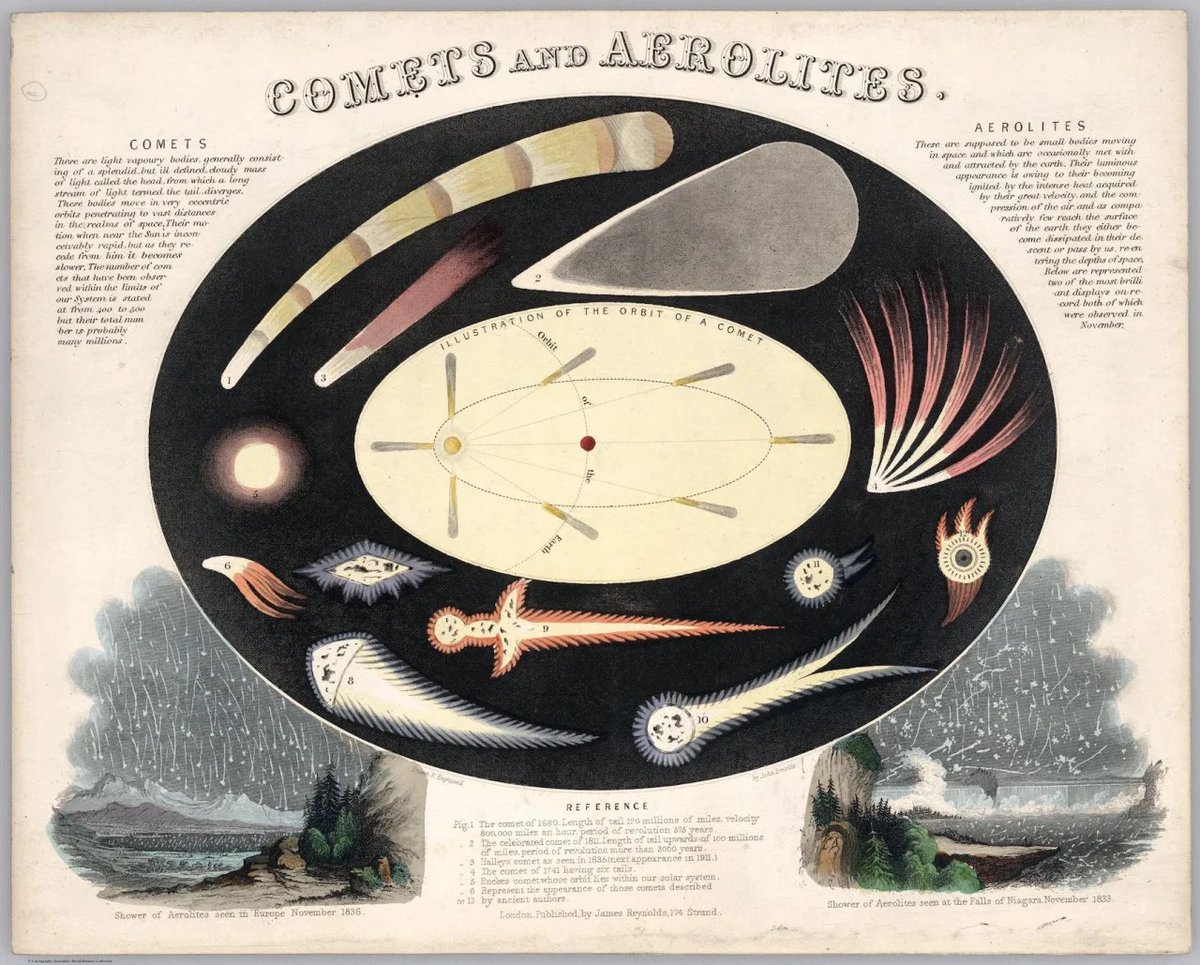 [...] How different is this mid-19th century display of Comets and Aerolites. It presents these heavenly bodies — “aerolite” is a now obsolete term for meteorite — in warm colors and animate shapes. Perhaps because they are drawn by human hand, they somehow appear less uninviting, as if they are the sea creatures you would hope to meet on a scuba dive in tropical waters.

The centerpiece shows the standard orbit of a comet around the sun and correctly shows how the tail always points away from it. The shapes around the centerpiece are not just randomly shaped sky objects; they are a family portrait of historical comets.
Click to expand...

Here is the information on the different comets numbered on the map:

The Great Comet of 1680 is also known as Kirch’s comet (after its discoverer) or to space bureaucrats as C/1680 V1. It’s also called Newton’s comet because the famous astronomer proved that the two comets seen in 1680 and 1681 were in fact one and the same.

This is also the first comet discovered by telescope. And it was one of the brightest ones of the 17th century, visible even in the daytime. Recent research shows it has an orbital period of about 10,000 years. See you again around 11,680 AD, Kirch-Newton!

Number 2 is the Flying V Guitar of the Skies, otherwise known as [t]he celebrated comet of 1811. Length of tail upwards of 100 millions of miles, period of revolution more than 3000 years.

In Russia, it was later called Napoleon’s Comet, as it was thought to have announced the French invasion of 1812. It gets a passing mention in Tolstoy’s War and Peace.

Although it looks rather underwhelming compared to its two predecessors, number 3 is perhaps the most famous of the bunch: Halley’s comet as seen in 1835. (Next appearance in 1911.)

Halley’s comet (officially 1P/Halley) has been observed since at least 240 BC, when it appeared in Chinese records. It was British astronomer Edmund Halley who in 1705 used earlier observations to calculate its orbit, proving that it is a regular visitor who returns every 76 years or so. It is the only comet visible to the naked eye that can appear twice in a lifetime.

Its visit in 1066 was later seen to be an omen for the Norman Conquest of England in that year. (The comet is shown on the Bayeux Tapestry.) American writer Mark Twain, who was born during its drive-by in 1835, famously predicted that he would “go out” with it in 1910. He was right.

The prospect of Earth passing through the comet’s tail in 1910 led to widespread panic, a run on gas masks, and the sale of “anti-comet pills” (and even “anti-comet umbrellas”). In Oklahoma, police prevented a religious group from sacrificing a virgin in an attempt to ward off disaster.

Ahead of Halley’s 1910 passage, reports that astronomers had detected deadly poison in its tail led to widespread panic. There was a run on gas masks, quacks sold “anti-comet pills” (and even “anti-comet umbrellas”). In Oklahoma, police prevented a religious group from sacrificing a virgin in an attempt to ward off disaster.

Halley’s previous appearance was in 1986. No virgin sacrifices were reported that time. The comet’s next visit will be in 2061.

Did we say sea creature? Number 4, a.k.a. [t]he comet of 1741 is a six-tailed beast that looks like a monster of the deep that could have Number 3 for breakfast.

The year mentioned on the map must be a mistake because the history books record a Great Comet of 1744 (official designation: C/1743 X1) as having had a “fan” of six tails. It is also known as the Comet of Klinkenberg-Chéseaux, after some of its first observers in December 1743.

By March 1744, when it was close and bright enough to be observed in daylight, it had developed its famous tails.

The sighting of this comet inspired Charles Messier, then 13 years old, to study astronomy. Messier would become one of history’s most famous astronomers, discovering no less than 13 comets of his own.

This one is nothing more than a glowing snowball. This is Encke’s comet, whose orbit lies within our solar system.

Encke’s comet (officially 2P/Encke) orbits the sun every 3.3 years. It was first recorded by Pierre Méchain in 1786 but named after Johann Encke, who calculated its orbit in 1819. As only the second periodic comet discovered, after Halley, it received the designation 2P. However, close approaches to Earth occur only every 33 years.

Encke is the protagonist of a curious theory on the origin of the swastika. The theory proposes that the symbol appeared in various cultures around the world at the same time. This would be because it resembles the four curved tails of a comet approaching the Earth head-on. Encke, which once had a more visually impressive body, could have been that comet.

The next numbers show comets (as) described by ancient authors: 6 is a three-legged red monster, 7 a pulsating blue lozenge, 8 a heavenly blue jellyfish, 9 a flaming red Sword of Justice, 10 a two-tailed blue globe, 11 the mini-me version of number 10, and 12 a truly terrifying Evil Eye in the sky.

(The map gives no further information about any of these comets. If you can help identify them, please let me know via the email address below.)

At bottom-left and right, the map shows two showers of aerolites, as seen in Europe in November 1836 and at Niagara Falls in November 1833. The map also offers charmingly quaint definitions of both phenomena.

Comets (…) are light vapoury bodies, generally consisting of a splendid, but ill defined, cloudy mass of light called the head, from which a long stream of light termed the tail diverges (…) The number of comets that have been observed within the limits of our System is stated at from 400 to 500 but their total number is probably many millions.

Aerolites (…) are supposed to be small bodies moving in space and which are occasionally (…) attracted by the earth. Their luminous appearance is owing to their becoming ignited by the intense heat acquired by their great velocity, and the compression of the air, and as comparatively few reach the surface of the earth they either become dissipated in their descent or pass by us, re-entering the depths of space.

This map was drawn and engraved by John Emslie and published around 1850 by James Reynolds at 174 Strand in London. Image found here at the David Rumsey Map Collection.
Click to expand... 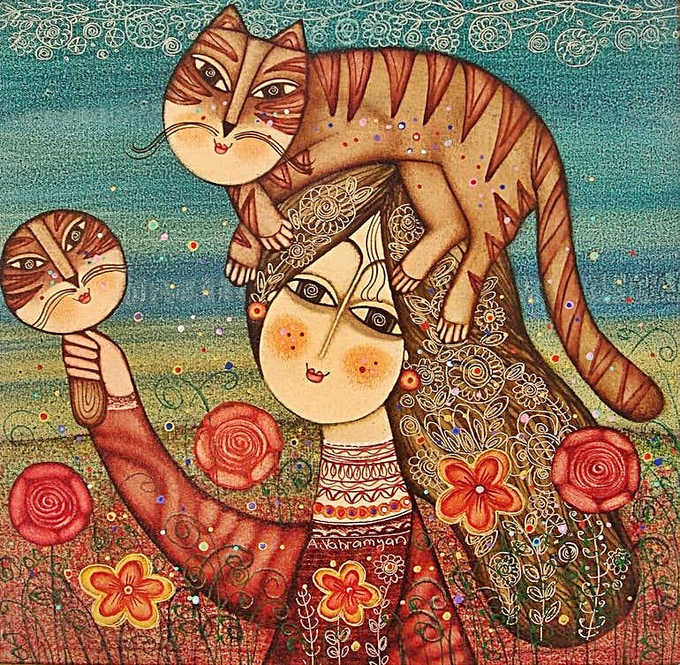 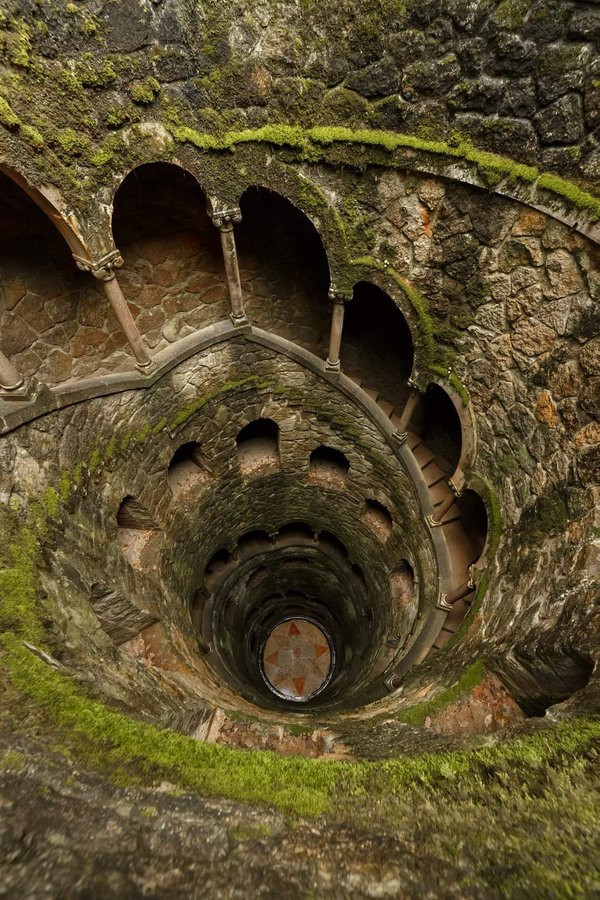 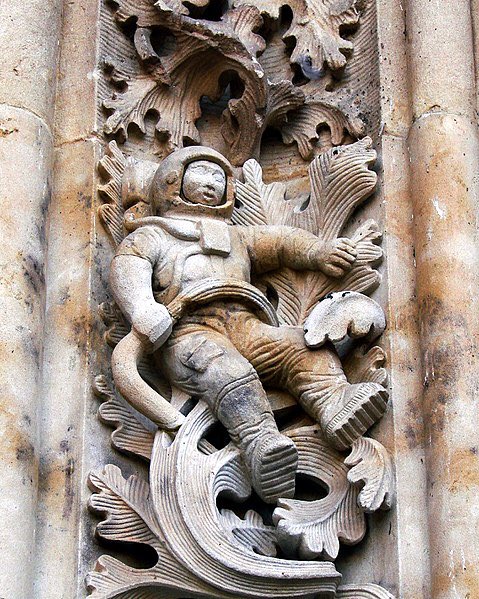 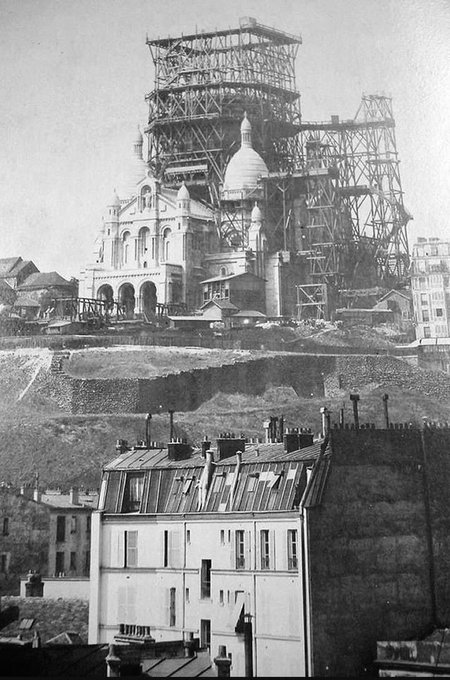 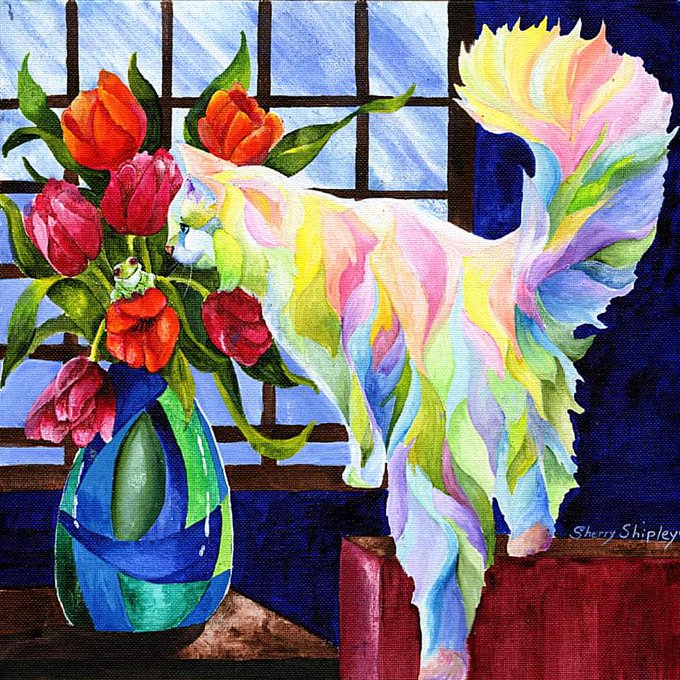 FOTCM Member
The illustrations of fairy tales are sometimes so beautiful that they deserve to be in the walls of a museum. And maybe in this way, museums would attract more children. Children of all ages, because in us there is a little child, don't forget!

Bruno Bettelheim says, in his book about the psychoanalysis of fairy tales, that in India there is a therapy for adults working with fairy tales. In this mechanical and gray world in which our civilization is immersed we can read fairy tales but also we can look at and meditate on illustrations where nature is alive, pulsating like a heart, absolutely delicious and clear like spring water, fresh and good, gentle, and funny also. Here are some more illustrations for you and your little child! Let your heart be joyful and happy, even for a little moment. 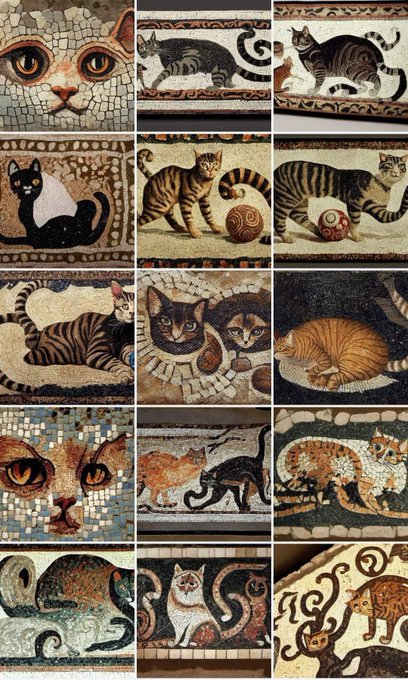 Art by Chie Yoshii Leto, Goddess of Motherhood, one of her symbols is wolf.

A Mudhif is a traditional reed house made, for at least 5000 years, by the Madan people (also known as Marsh Arabs) in the marshes of southern Iraq, ancient Mesopotamian swamps, considered to be the site of the mythical Garden of Eden,
In the traditional Madan way of life, houses are built from reeds harvested from the marshes where they live. A mudhif is a large ceremonial house, paid for and maintained by a local sheikh, used by guests or as a gathering place for weddings, funerals, etc. Each village sheikh had a mudhif, which was used as a place of worship.
Each village sheikh had a mudhif that could accommodate at least ten people. The number of arches used in a mudhif is dictated by the tribe and family group]. Sometimes the mudhif was decorated with additional bundles of reeds, arranged in decorative patterns, placed on the façade, to serve as a tribal identifier. The entrance to the mudhif always faces Mecca.
The most common type of reed used for the construction of the mudhif of marshland is ihdri. Reed has properties that make it an ideal building material - it has a high concentration of silica which makes it water resistant, unattractive to insects and other pests, and an excellent thermal and sound insulating material. It is inexpensive and is both flexible and durable as a building material, which encourages creativity.
In the 1980s, about half a million Arabs lived in the marshes. However, from around 1993, Saddam Hussein began draining the marshes in an attempt to destroy the life and culture of the southern Arabs. After Hussein's defeat in 2003, the Arab communities began to dig up the dykes, re-flood the marshes and resume their traditional way of life.

FOTCM Member
Somme very beautiful illustration as beautiful as paintings from the Louvre, more in fact because these ones makes us smile! (humor said the C's!)

I think this bear is from Russia. He reads a book, that's something!