I searched for Camelopardalids and Comet 209p and did not find anything so here are some links and what is about to take place. Happening right now!

Watch Live: A Never-Before-Seen Meteor Shower Lights Up the Sky

Tonight’s night sky will feature a rare event: The birth of a new meteor shower. Viewers in North America will have the best chance to catch this cosmic show, which could become an annual occurrence. But if skies are cloudy or lights too bright where you are, catch two live webcasts from the Slooh Space Camera and NASA, the first starting at 3 p.m. PT/6 p.m. ET and the second beginning at 8 p.m. PT/ 11 p.m. ET.

The sun’s heat causes a comet’s frozen surface to sublime, kicking off chunks of rock and ice. These form a faint dusty ring that spans the comet’s orbit. Meteor showers occur when the Earth slams into this debris field. The chunks will burn up in our atmosphere, creating shooting streaks in the night sky.

Tonight’s meteor shower is brought to you by comet 209P/LINEAR, a faint object that was only discovered in 2004. Because its orbit is tilted slightly relative to ours, the Earth has never before run through this particular comet’s debris field. But this year, the stars (or icy planetoid objects) literally aligned and our planet is expected to pass right through some of the densest debris that 209P/LINEAR has left behind during its travels around the sun. Note: These bits of space litter are very small and will burn up harmlessly in our atmosphere.

The new meteor shower has been given the tongue-twisting nickname of the Camelopardalids, after the constellation Camelopardalid, from which they will appear to radiate in the sky. The name of this relatively unfamiliar constellation translates as giraffe, because ancient Greeks thought that giraffes looked like a cross between a camel and a leopard (they sort of do). Because this is the first time we’ve seen this meteor shower, astronomers don’t know how many fireballs to expect. But some predictions suggest there could be as many as 200 meteors per hour, a shower that would surpass nearly ever other major one of the year, including the spectacular Geminids.

But the brand new Camelopardalids could always turn out to be somewhat less than impressive. Nobody is quite sure how much debris dropped off comet 209P/LINEAR at this particular point in its orbit. If the show ends up being great, it could become a regular feature of the annual meteor shower calendar. Other reliable meteor showers, like the August Perseids, have been observed annually for over 2,000 years. But according to astronomer Ethan Siegel, “we’ve never witnessed the birth of a meteor shower in all of recorded human history,” potentially making this a real night to remember.

Tonight’s first Slooh show will start while the sun is still up for much of North America, using telescopes in the Canary Islands off the coast of Africa. The second show will broadcast live feeds from Arizona, just before the new meteor shower is expected to peak. Slooh’s experts will be joined by scientists from NASA including astronomer Peter Jenniskens, who discovered 209P/LINEAR. If you want to get out and see the meteors with your own eyes, you’ll need to drive to a place far from city lights. Give your eyes at least half an hour to adjust to the dark and then look up and to the north between midnight and 2 a.m. PT (3 a.m. to 5 a.m. ET) for best results.
Click to expand...

Everything you need to know: Camelopardalids could be the best meteor shower this year

An exciting new meteor shower – the Camelopardalids – might peak this Friday night and Saturday morning (night of May 23-24, 2014), according to clocks in North America. And, although no one can be absolutely sure, mid-latitudes in North America are predicted to have the best view of this shower. It’s coming up soon! This possible shower stems from Comet 209P/LINEAR, discovered in 2004. If the predictions hold true, Earth might be sandblasted with debris from this comet, resulting in a fine display of meteors, or shooting stars on the evening of May 23, and the morning of May 24. Follow the links below to learn more about the possible 2014 meteor shower of Comet 209P/LINEAR.

Because of the time predicted for the meteor display, observers in southern Canada and the continental U.S. are especially well positioned to see the meteors in the early morning hours of May 24 (or late at night on May 23). Will the predictions hold true? They are not always 100% reliable, which is why, no matter where you are on Earth, this shower is worth a try around the night of May 23-24.

The meteors will radiate from the constellation Camelopardalis (camelopard), a very obscure northern constellation. Its name is derived from early Rome, where it was thought of as a composite creature, described as having characteristics of both a camel and a leopard. Nowadays we call such a creature a giraffe! Since meteor in annual showers take their names from the constellation from which they appear to radiate – and since this meteor shower might become an annual event – people are already calling it the May Camelopardalids. What we know about Comet 209P/LINEAR. The photo and video above show small and dim Comet 209P/LINEAR. We won’t see this comet with the eye alone. What’s exciting here is that calculations of the orbit of 209P/LINEAR indicate that – on the night of May 23-24, 2014 – Earth will sweep through debris trails from this comet. Debris left behind by the comet may enter our atmosphere and burn up, creating a new and perhaps very strong meteor shower!

209P/LINEAR is a periodic comet, that is, its orbit around the sun is relatively short so that we see the comet come close to the sun again and again. Comet 209P/LINEAR’s orbit brings it near the sun in just over 5 years. Its last perihelion passage was May 6, 2014. Interestingly, the debris we’ll encounter is not fresh debris left by the comet during its 2014 perihelion passage. Instead, we’ll be passing through a stream of cometary debris left behind by Comet 209P/LINEAR in the 1800s.

This comet was discovered on February 3, 2004 by the automated observing campaign – the Lincoln Near-Earth Asteroid Research project (LINEAR) – whose name it bears.

Will Comet 209P/LINEAR create a meteor storm? In 2012, meteor experts Esko Lyytinen of Finland and Peter Jenniskens at NASA Ames Research Center were the first to announce that Earth was due for a May 2014 encounter with debris from Comet 209P/LINEAR. Other meteor experts quickly confirmed this prediction and some did use the words “meteor storm.” The most recent calculations, however, indicate we might get a strong shower, but perhaps not a storm of meteors.

So far,given the observations, we estimate a ZHR (zenithal hourly rate) of 100/hr to 400/hr, which is an excellent outburst! But this shower can become an exceptional one. Indeed, given the current orbit of the comet, all the trails ejected between 1803 and 1924 do fall in the Earth’s path in May 2014! As a consequence, this shower might as well be a storm.
Click to expand...

The more recent, less optimistic calculations come from Quanzhi Ye and Paul A. Wiegert, both at University of Western Ontario. Their work was published online in November 2013. In a report on their work at skyandtelescope.com, John Bochanski wrote that Ye and Wiegert’s work suggests a rate of 200 meteors per hour under ideal conditions. Bochanski wrote:

But Ye and Wiegert warn that, given the current relatively weak dust production of the comet, rates could be much lower. With the low dust production, as well as the team’s lower estimate of how many debris streams from the comet’s previous passes are hanging around in this region of space, it’s highly unlikely that we’re in for a meteor storm (1,000 per hour) — although the team couldn’t quite rule it out.
Click to expand...

Will Comet 209P/LINEAR produce a meteor storm, or at least a strong meteor shower? As with all meteor showers, the only way to know is to go outside on the night of the predicted peak and see for yourself.

Bottom line: On the night of May 23-24, 2014 – if predictions hold true – Earth might be sandblasted with debris from Comet 209P/LINEAR, resulting in a fine display of meteors, or shooting stars. The debris stream was laid down by the comet in the 1800s. People are already calling this shower the May Camelopardalids, taking its name from the shower’s radiant point in an obscure far-northern constellation. Will it be a meteor storm? Most recent calculations say no, but it might be a strong-enough shower to be thrilling!
Click to expand...

I also find it interesting that it radiates from close to Cassiopeia.

There are more graphics, video and links at the above article links you can checkout.

Moderator
FOTCM Member
The meteor shower has been briefly mentioned here: https://cassiopaea.org/forum/index.php/topic,33946.msg489384.html#msg489384 but it deserves its own thread indeed.

More details here _http://www.nasa.gov/sites/default/files/files/Brand-New-Meteor-Shower.pdf
At this point, better go outside and enjoy the show if possible, whatever may happen :)

FOTCM Member
Never heard about Camelopardalids until today but looks like they increased this year. 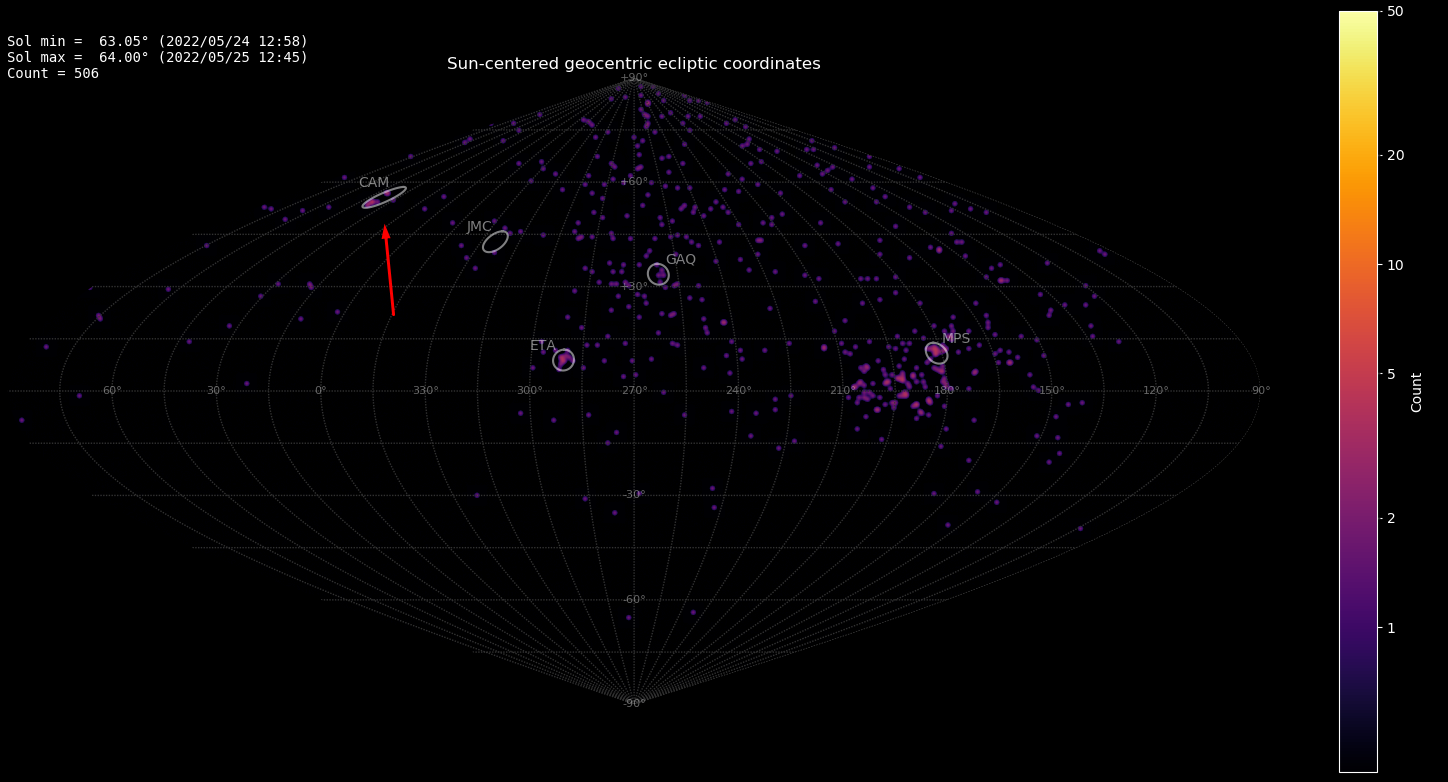 By Damir Šegon, Denis Vida and Paul Roggemans Abstract: Seven very similar Camelopardalid orbits were collected by cameras of the Global Meteor Network in a time span of less than 7 hours around solar longitude 63.56° (2022 May 25, 01h48m UT). More dispersed orbits related to this meteor shower h