I suddenly found this very appropriate. For everyone in this weird world of Coronavirus, that is.

It's very strange that the date this speech commemorates is actually only 2 days separated from the US elections. Wow! What a coincidence.

Ambassador
FOTCM Member
The situation in Ireland goes from the insane to the grotesquely insane.

The current 'new cases' stands at a staggering 190 people. There has been 1 'new death'.

But do our great leaders act accordingly to fact - hell no!

In a state of implicit panic, The Chief Medical Officer, Ronan Glynn, wrote a letter on 7th August filled with paramoralistic doom and gloom to the Minister for Health, Stephen Donnelly TD, outlining in bare facts the dire reality we face:

As advised on the 7th August, there had been a sharp rise in cases that week, more than doubling over the period, and several significant and large clusters had developed in one region of the country, covering the counties of Kildare, Laois and Offaly. This led to the recommendation and subsequently implementation of a range of public health measures for these counties.

Over the last ten days, the number of cases in that region has remained high and the number of cases in other parts of the country has also increased. The NPHET met again today specifically to review and discuss the current profile of the disease and the evolving situation across the country and to consider appropriate measures. As part of these considerations, the NPHET noted:
Ireland’s current epidemiological situation at the time of consideration by the NPHET was as follows:

Demographic and Location Trends
Hospitalisations
Clusters and Modes of Transmission

Mode of Transmission
Consequently, in light of the current epidemiological status of COVID-19 as set out above, and cognizant of ECDC advice, the NPHET considered today that a cautious approach must be pursued and advises that the Government give consideration to the application of a number of enhanced public health measures as set out in the Appendix to this letter to apply across the country1 until midnight on Sunday, 13th September at which point the situation will be reviewed.
Click to expand...

Dutifully the Minister announced to the nation August 18th, the following new measures:

The Government announced these new measures to combat coronavirus on Tuesday evening. They are due to come into effect immediately and remain in place until September 13th.
Meanwhile, for those over-70 or who are extremely medically vulnerable, it is asked that you use your individual judgement to:

Add this to the existing 'mandatory' mask wearing, social distancing etc = fascism and fear 2.0, Irish style (now be nice to each other please... but don't be in any way connected).

All this for 190 'new' cases which we can safely assume are the product of increased testing that upon finding any trace of previous contact with COVID family of virus dating back 20+ years logged them as a new case!

In particular to note, to even achieve all these figure they have clearly been heavily testing and using younger 'health care workers' to try and hide the true demographic that 92% of all cases to date are in the age range 65+. In particular they are trying to get this figure down and to 'prove' its now impacting younger people because hell, this mustn't be known that this is an old age/infirm condition.

So in essence the virus is completely gone from the population in terms of actual threat - the rest is nothing but fraud.

This article from SOTT is worth noting.

We should always keep in mind that 'wars' are a designed distraction from bigger problems faced at home. In this sense COVID is a war on humanity to stop it from knowing something wicked this way comes. In light of this and the above, the following is also of interest if accurate and indicative of what is going on below the surface.

And so we come back to the C's and their suggestion that cosmic 'weather' will intervene soon. Keep that in mind and preparedness for same; despite all this horrible day-by-day distraction, the real challenges and game changer will come from above.

Jones said:
So. according to this article, it turns out that the AstraZeneca vaccine from Oxford University is using a chimpanzee adenovirus (causes common colds in chimps) in the covid vaccine by combining the adenovirus with spike proteins from coronavirus and gene sequencing. If that isn't gain of function, I don't know what is, though in the article they say that the adenovirus won't infect people. This is the vaccine that ScoMo is so generously offering to Australians.

A little bit of extra info regarding AstraZeneca

Violation Tracker, produced by the Corporate Research Project of Good Jobs First, is a wide-ranging database on misconduct by large and small corporations throughout the United States.

FOTCM Member
Agent provocateurs driven back in a police van during an anti lock-down protest in Den Hague, Netherlands

And the other one, 2 midaged women are told to f-o and hit by a robot or drone cop.

Michael B-C said:
The situation in Ireland goes from the insane to the grotesquely insane.
There has been 1 'new death'. Some pandemic!

Good post. Dutch situation is the same as the Irish, maybe a week behind.
Emergency law is rushed through, maybe or not giving the minister of health unlimited powers. A court case against a city ordinance to temporarily (3 weeks) forbid not wearing a mask (the muzzle) in buzzy places, failed, but could not be blocked altogether as planned by the state.

bjorn said:
Agent provocateurs driven back in a police van during an anti lock-down protest in Den Hague, Netherlands

It is mentioned to be an AE, arrest unit or SWAT team. (in peace outfit?)

Michael Thau said:
The Annals of Internal Medicine just published a comprehensive new study on how contagious the COVID-19 virus is. And I’m sorry to report that the case for a number of popular new practices that seem to have filled some spiritual need a lot of Americans have for self-abasement just completely collapsed.

The list of practices no longer having any conceivable rationale includes:
Likewise for any other humiliating rituals state and local officials plan on forcibly enacting to keep you safe from the scourge of COVID-19 that their own sense of self-worth precludes participating in.
Click to expand... 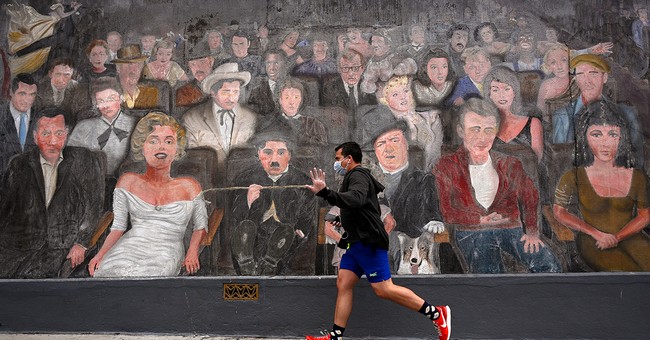 (AP Photo/Mark J. Terrill) The purpose of communist propaganda was not to persuade or convince, not to inform, but to humiliate; and therefore, the less it corresponded to reality the better. When people are forced to remain silent when they are being told the most obvious lies, or even worse...

[/QUOTE]
Note the vaxxin is similarly made and the carrier is also novel for humans, just like Covid.
Not like the soon available Russian one that uses 2 existing innocent virii.
But that one is useless, for somebody else is going to earn the money and it has no chip.
It will be interesting to see the narrative change after Putins twist

Ballasy pointed out some remarks Fauci made on NBC News at the end of April that sounded almost like he could have been reading from a script for a remdesivir commercial.

"The data shows that remdesivir has a clear-cut, significant, positive effect in diminishing the time to recovery."
Click to expand...

Except, of course, a commercial would’ve been required to inform the public of any potential negative side effects. And Fauci skipped over that part.
Click to expand...

The fact that 8 members of the panel have financial ties to Gilead does, by itself, however, cast a suspicious light on the way Fauci starts sounding like Ronald McDonald discussing a Big Mac when remdesivir comes up.

It also raises very serious concerns about his efforts to discourage use of the much cheaper and, the evidence suggests, better alternative, hydroxychloroquine, which seem to include causing a lot of needless death by preventing people whose lives would have been saved from taking it.

If that surprises you, then you haven’t been following Dr. Fauci’s career very closely.
Click to expand... 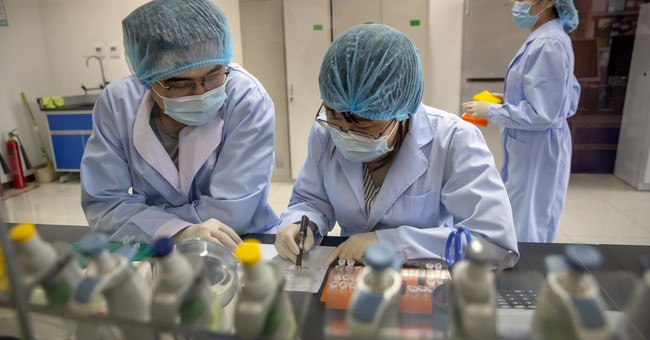 (AP Photo/Mark Schiefelbein) Nicholas Ballasy over at Just The News is reporting that 10 members of the NIH panel responsible for setting the agency’s guidelines for treating COVID-19 are, in one way or another, pocketing a check from companies peddling COVID cures. 8 of the lucky buggers are...

This is just carrying on from what Nazi Germany was doing. Flouride was introduced into drinking water shortly after WW2. Dentists were paid large sums of money to endorse it. Now people think flouride is necessary and good. It was all preparation for what we have today. People are compliant because they just can't see any way around this situation. Made to be compliant. Socially engineered to be compliant.

Drinking water with flouride. After knowing about the damage it has caused since being introduced and drinking unflouridated water for more than 10 years now, whenever water is fluoridated it is noticeably different to my taste buds. It takes time for flouride to work. Results are not immediate. The only good thing about it is that it's not a death sentence. Being that would likely have raised alarms in the public.

If your source of water has flouride, it would be difficult to do anything but be compliant.

WIN 52 said:
The only good thing about it is that it's not a death sentence. Being that would likely have raised alarms in the public.

If your source of water has flouride, it would be difficult to do anything but be compliant.
Click to expand...

It might not be a death sentence but since it leads to the calcification of the pituitary gland it's a kind of a death sentence to spiritual development, osit.
The iodine protocol seems to be more important than ever for many reasons but also for detox from fluoride.

Tauriel said:
It might not be a death sentence but since it leads to the calcification of the pituitary gland it's a kind of a death sentence to spiritual development, osit.
The iodine protocol seems to be more important than ever for many reasons but also for detox from fluoride.
Click to expand...

Fluoride also is an excitotoxin and contributes to synergistic toxicity. Fluoride can be removed from drinking water, but it's not as simple or as inexpensive as filtering out chlorine. 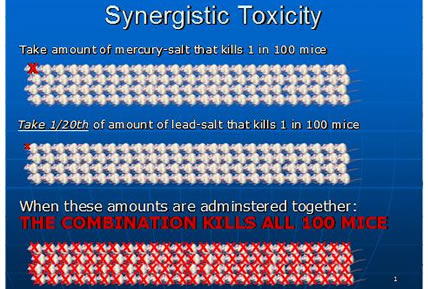 What most people fail to understand is that when chemicals enter the body, they don’t remain isolated. You may get chemicals entering the body from different sources at different times. But …

FOTCM Member
To get rid of the intoxication of all these metals and other products, I take zeolite
Zeolite, détox ou intox ? - Efficium

aragorn said:
Some years ago I listened through all the interviews with Fletcher Prouty, the author of ‘The Secret Team’, and I remember how in one episode he was asked something like “Who is at the very top of the elite rulers?” He answered that based on his knowledge and experience, the utmost top rulers of this world are Chinese (he might have said Asians), but they are hidden and no one knows their name
Click to expand...