Gary said:
As devastating as these extreme flooding events are, I can't help wondering what if all this precipitation fell as snow!

I have been wondering the same thing myself. If this pattern keeps up as fall and winter approach, things might get really ifffy.

Ambassador
FOTCM Member
About the floods in Germany - here is a very interesting eye-witness story (deepl'ed from German) that might give a clue as to what is to come. Notice the extreme incompetence/overwhelmedness of the authorities; the lies of the politicians who just put on a useless and disgusting show. Once communication was gone, there was looting. Notice also the need for cash and water and alternative communication and neighborhood organization. Notice the (justified) anger and frustration of a normal person faced with the truth about this whole charade that is our reality. Keep in mind that this is Germany, supposedly one of the best organized and most advanced countries in the world.

I am affected by the disaster in Euskirchen. My family lost everything in Odendorf, we are without electricity, hot water, internet, telephone or mobile phone, all belongings are gone. I am less affected materially, but my family has been badly hit. I'll start from the beginning: The flooding was a catastrophic flood with a forecast. Weeks before the disaster, the dams were already full to the brim and the soils were soaked that no further water could be absorbed. The information can be checked at the dams stands. The weather situation with continuous rain and heavy rain can also be checked online.

Even before that, the civil protection should have pumped out water to counteract the announced weather situation. On 14.7. the continuous rain turned into heavy rain. Gullies and canals were already flooded at 18:00 and fountains, including pond fish, shot out of the streets. At 19:00 the first pictures of Odendorf reached me, the car of my daughter-in-law and that of her mother were already swimming, the small stream had turned into a raging, torrential water, streets flooded, rails washed out. The basement was flooded and people fled to the upper floor. Meanwhile, Euskirchen was already flooded, power outages and communications were already paralyzed.

The water was everywhere. The pedestrian zone, parking garages, residential buildings, stores - everything was under water. In Odendorf, the water forcefully pushed through the ceiling of the upper floor. Furniture and electrical appliances swam against the walls, hit the ceiling. My family fled the now flooded house via the attic, with a 4-year-old! At that point, it was all up to the volunteer fire department. No disaster control, no federal armed forces. THW and neighboring farmers with slurry pumps were the only support.

My family's neighbor drowned in his own house. The next day, the extent of the disaster in Euskirchen was catastrophic. We were completely cut off from the outside world and neighbors helped each other. The scrap inventory was cleared out of the houses.

Basic supplies were dead. Food was needed, but stores were closed except for a few and you could only pay with cash. After all, it was drilled into us during Corona to avoid this. In the little affected branch of a savings bank cash withdrawal was not possible even 2 days after the flood. So neighbors jumped in again so that at least water could be bought. We managed 500 meters in 45 minutes by car, then turned around. No one could be reached, the cell phone network is dead to this day. Odendorf is not accessible, we were not informed, because neither radio nor television had reception. If one still has a device at all ... in the meantime there is looting in the city center. No electricity, no security - just those who sweep debris, mud and garbage with a blank stare. This was an eyewitness account from my brother-in-law.

The house is in ruins

Everything is in ruins, paving stones torn away, all stores destroyed. 24/7 sirens, rescue workers, helicopters, you feel like you are at war. One does not sleep. At 4:00 a.m. the first reception bar on the cell phone. Desperate attempts to reach the family in Odendorf. No use. No reception. Finally reached the missing persons office. Odendorf was evacuated, but they had no lists of who had been evacuated. This list is taken up because of the calls reporting missing persons. Two days of desperate search for the son, his wife, her mother and my granddaughter. Finally found on 7/16, in a town 15 km away. They lost everything. Meanwhile, their car was found upside down on the railroad tracks in Odendorf. The house is in ruins.

Our "public television" are neighbors and acquaintances who share. But we have heard how sad our chancellor is, how concerned politicians visit our places. Seriously? We were not protected, help comes from residents! We offer sleeping places, organize clothes and food, provided by private companies, neighbors and friends. We do not need pity! We need urgent and unbureaucratic help in the form of money! People have lost everything here: Houses, cars, belongings, photos, toys. Everything! We in the affected areas are registered, have a tax number, through which emergency aid can be distributed! We need a basic supply! How can we boil [the unclean] water without electricity?

Luisa Neubauer is on strike for us and the climate? Please let it be! Loosen money, your family has enough! The last thing we need are jumping, incompetent activists! Would we have gotten away with e-cars? Where would we have charged them? Get out there with shovels, tools and emergency generators and actively help! I blame politics for the misery. We were defenseless and wantonly exposed to the catastrophe. Everyone was forewarned, but they waited and saw how bad it would get. Now, please, put your money where your mouth is and help the people who have lost everything. Money from mask deals, child benefit abroad, money for a useless Europe, money for China, India etc. we need now! You can forget about pity and discussions. Secure our basic supply! Help us! We can use every helping hand.

We are traumatized. Everyone has lost someone they know. And it's not over yet. Thank you for nothing, nothing at all. You can't even remotely imagine our situation! But I am grateful for the tireless efforts of the helpers! I am sad with the people who have lost their relatives and friends. And I am angry, because perhaps it could not have been avoided, but could have been mitigated.
Click to expand...

Laura said:
I have been wondering the same thing myself. If this pattern keeps up as fall and winter approach, things might get really ifffy.
Click to expand...

Me too in crossed my mind and imagine it happening with this: 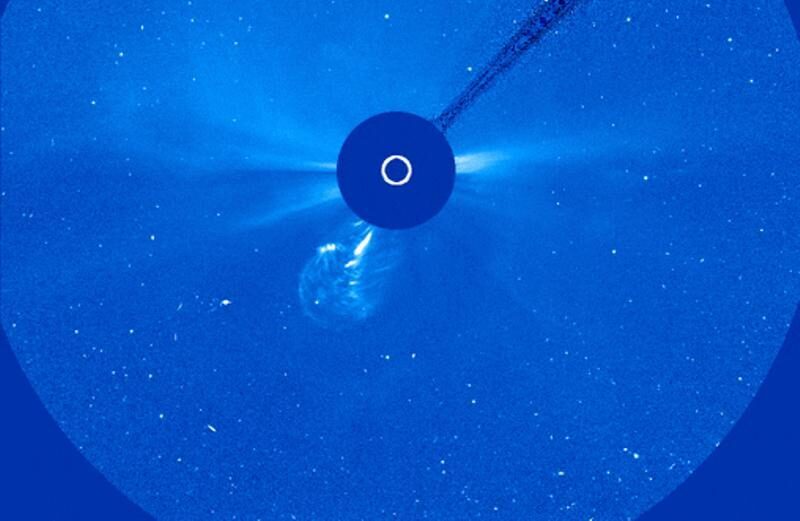 The sun fires off its third 'halo CME' in as many days -- Sott.net

Better to have extra firewood this year.

Recent updates on the situation in the Netherlands:

You can see here, that the Alp region really got a lot more additional rain within only 24 hours, e.g. from 17 July to 18 July 2021, 08.00 summer time. Several stations recorded more than 100mm... and many between 70-100 mm. The corresponding satellite charts looked rather "innocent" I remember (not dramatic in anyway) - but that can be highly deceiving.

The latest from the Netherlands:

Over €5 mil. raised for flooded Limburg; Water levels falling
Many residents evacuated from flooded Limburg able to return home
River levels in Limburg go down after weekend of flooding - DutchNews.nl

FOTCM Member
Latess from China, From bad to worse. Check the video with the link. 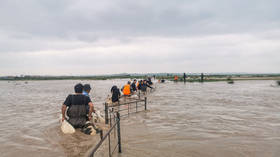 Two dams in Inner Mongolia’s Hulunbuir have collapsed following torrential rain, according to an announcement from China’s water ministry on Monday, citing concerns about the safety risks of aging infrastructure in the region.
The two dams failed on Sunday afternoon after a torrential downpour saw 87 millimeters of rainfall in the area over the weekend and 223 millimeters at a nearby monitoring station. As one of the dams reached maximum capacity, water came over the top before the entire infrastructure was washed away in minutes, resulting in substantial damage.

A video shared by a Chinese individual online shows the moment that water breached the banks of a dam and began flooding out of the reservoir.

Other footage circulating on social media shows water pouring from the dams after their banks were breached, causing destruction and sweeping away infrastructure and flooding fields.

Despite the collapse of the dams and the subsequent flooding, Chinese officials confirmed that locals were evacuated downstream and no casualties have been reported.
The Hulunbuir city government stated on WeChat that around 16,660 people have been affected by the flooding, with at least, 53,807 acres of farmland underwater and infrastructure destroyed in the area.
The flooding left livestock trapped on the border between China and Mongolia. Police were deployed to help more than 1,000 sheep who were surrounded by rising floodwater and took three hours to save the distressed animals.
ALSO ON RT.COMMerkel visits areas ravaged by floods, says Germany needs more climate-focused policy
Earlier this year, China’s deputy water resources minister, Wei Shanzhong, announced at a briefing that nearly a third of the country’s reservoirs have not had a mandatory safety appraisal due to a lack of financial resources.
Throughout China, there are over 98,000 reservoirs used by the country to prevent flooding, generate power and manage shipping but more than 80% of them have been in existence for over 40 years, creating a potential safety risk, according to the government in Beijing.
Think your friends

Final updates from the Netherlands:

FOTCM Member
OK, can you imagine yourself in this situation and stay calm. This is reality, not a hollywood movie. 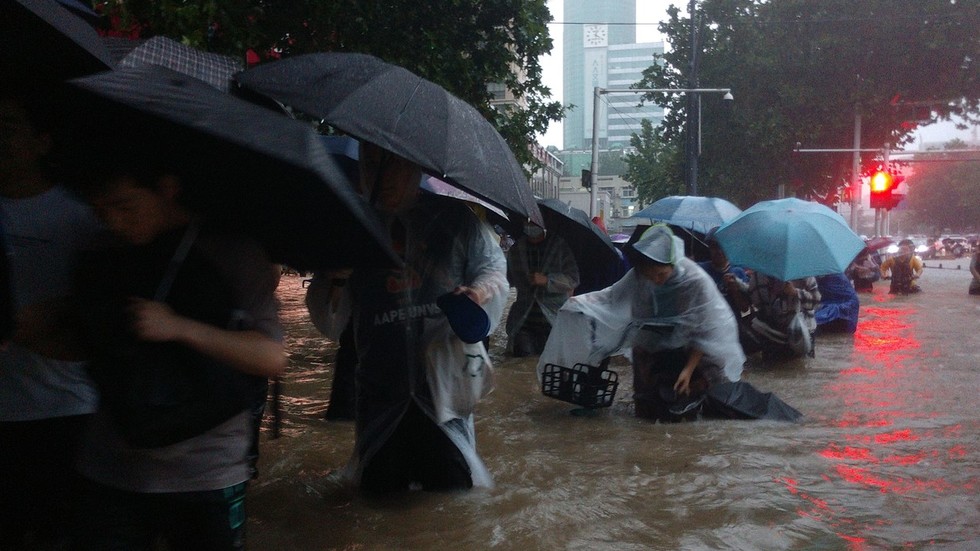 Subway riders in Zhengzhou in China’s Henan province found themselves trapped by rising floodwaters on Tuesday as rivers burst their banks, pouring into streets and disrupting train services after 200mm of rain fell in one hour.

Subway riders in Zhengzhou in China’s Henan province found themselves trapped by rising floodwaters on Tuesday as rivers burst their banks, pouring into streets and disrupting train services after 200mm of rain fell in one hour.

I wish to add some weather satellite charts

to give you an image how those enormous thunderstorm and rain clusters looked like over East China. Well, they looked gigantic... During daytime, large areas of China were littered with all kind of sized thunderstorms. I read somehere that the area of Henan is normally rather dry in summer, and a son's mother said, the corn fields needed rain...

The center of thunderstorm growth happened south of Zhengzou (west of Zhoukou) where it constantly got new large impulses maintaining the huge clusters, you see in the second satellite chart.

Outside these images, i noticed very strong dynamics going off, with "rain heavy looking" cloud masses. The kind of clouds on satellite images you sometimes can see over Italy (or Spain) during later autumn, dumping large amounts of rain.

FOTCM Member
Severe floods hit #Zhengzhou, the capital of Henan province, in central China. Streets flooded, people are trapped in the subway, their homes, and vehicles. The city recorded the highest single-day rainfall on record.