If you're a fan of Frank Herbert's "Dune", the trailer for the upcoming film is here -


Oscar nominee Denis Villeneuve (“Arrival,” “Blade Runner 2049”) directs Warner Bros. Pictures and Legendary Pictures’ “Dune,” the big-screen adaptation of Frank Herbert’s seminal bestseller of the same name. A mythic and emotionally charged hero’s journey, “Dune” tells the story of Paul Atreides, a brilliant and gifted young man born into a great destiny beyond his understanding, who must travel to the most dangerous planet in the universe to ensure the future of his family and his people. As malevolent forces explode into conflict over the planet’s exclusive supply of the most precious resource in existence—a commodity capable of unlocking humanity’s greatest potential—only those who can conquer their fear will survive.
Click to expand...

I was a fan of the first film that came out in 1984 and I started reading the books some time ago but didn't finish. I think I'll pick up reading them again. There is even some Pink Floyd music from "Dark Side of the Moon" towards the end of the trailer!

FOTCM Member
Looking forward to this one.
I've often said that this material would make a great mini series as well.

FOTCM Member
I wonder if the 1984 full director's cut (the original 8-hour footage by David Lynch) will ever become available some day. Let's hope this version will match Lynch's artwork. Same director as for Blade Runner? That should be good!

Ambassador
FOTCM Member
I will definitely be seeing this one. Release is in December, I believe.

FOTCM Member
Wow, that's a great trailer. I've been listening to the series of Dune novels on Audible. I'm on #4; God Emperor of Dune. This one builds on the story, gets farther into theories of governments, religions, militaries, genetics, mind over matter. Excellent.
Frank Herbert wrote 6 of these books and his son Frank has continued the series, including some prequels.

FOTCM Member
The Youtube video has over 217K views. I would like to see someone make a movie about Carlos Castanedas'books.

Mark7 said:
I would like to see someone make a movie about Carlos Castanedas'books.
Click to expand...

genero81 said:
I will definitely be seeing this one. Release is in December, I believe.
Click to expand...

It looks like it. I'm looking forward to this movie, though it will always compete with Lynchs version of Frank Herberts novel I'm afraid.

Rhansen said:
Looking forward to this one.
I've often said that this material would make a great mini series as well.
Click to expand...

I remember about twenty years ago there was a miniseries or two on the Sci-Fi channel about Dune. I haven't seen them but apparently they were well received. According to what I found online, there is to be a new tv series in the future.
From Wikipedia -

In June 2019 it was announced that Legendary Television will be producing a spin-off television series, Dune: The Sisterhood, for WarnerMedia's upcoming streaming service, HBO Max. The series will focus on the Bene Gesserit and serve as a prequel to the 2020 film. Villeneuve will direct the series' pilot with Jon Spaihts writing the screenplay, and both will serve as executive producers alongside Brian Herbert.[104] Though he initially served as showrunner, on November 5, 2019, The Hollywood Reporter reported that Spaihts had stepped down from this position to focus more on the sequel to the 2020 film.
Click to expand...

unkl brws said:
I remember about twenty years ago there was a miniseries or two on the Sci-Fi channel about Dune. I haven't seen them but apparently they were well received.
Click to expand...

It's a 2 part miniseries (Dune in 2000 and Children of Dune in 2003). I've seen it (have the DVD's) and it is excellent, I really love it. It's supposed to be most faithful to the books (which I haven't read, but was planning to at some point… but there are so many things to read I don't know when I'll be able to delve into that one!). The soundtracks (by Graeme Revell and Brian Tyler) are gorgeous, the special effects are good (for the time) and the cast is great (Jame McAvoy, Susan Sarandon, William Hurt, Alec Newman). It has an onirical quality, and it's really fascinating to watch. You're really transported into another world.
I didn't care for Lynch's version. I'm not really impressed with the trailer for the new film, which looks too hollywoodian/in your face/star warsesque for me. I highly recommend the miniseries.


The soundtrack (I don't think anyone can top it):

Didn't really enjoy the screen adaption but have lugged the 1984 printed edition around since I was 12 years of age;

Yupo said:
I'm on #4; God Emperor of Dune. This one builds on the story, gets farther into theories of governments, religions, militaries, genetics, mind over matter. Excellent.
Click to expand...

God Emperor of Dune was epic. I read them all a LONG time ago, but that one is the one that marked the series for me. I think that's the one that explored the gholas concept. (I may be mis-remembering here). Chapterhouse was all about the Bene

The continuation from his son was labelled as pretty weak by fans. Haven't read those yet.

Rhansen said:
Looking forward to this one.
I've often said that this material would make a great mini series as well.
Click to expand...

It would take 20 episodes easy to just get the basics down from the first book alone.

One can only hope.

Mind you, they tried and mostly succeeded for the action parts for LOTR, but NONE of the subtleties and real stuff came out of those, which is where Dune shines, not so much action.

Waiting for this film I want to recommend a documentary that talks about the attempt of the cult director Jodorowsky to make the film 'Dune'.
The documentary is very interesting. 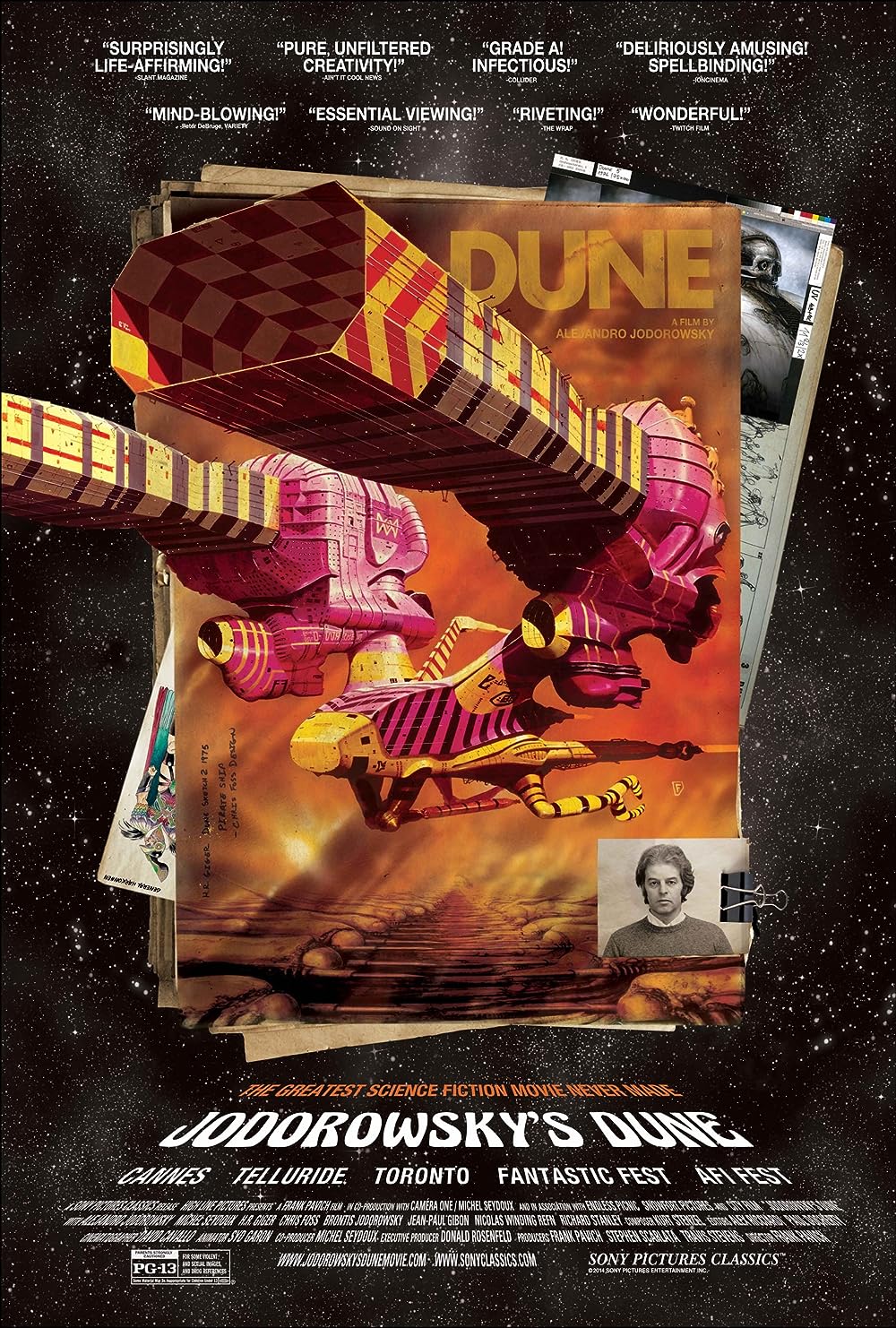