Translation
I propose to open a new branch, which could be called the Events in Russia.
In my opinion, the election branch refers to a discrete event, which is certainly very important for the whole world, not only for Russia, which has already happened. All the things that are now being published in that branch, starting with the formation of the government and ending with the case of the Skripals and the opening of the Kerch bridge have a very indirect connection with the elections of 2018 and, in my opinion, all these things would be more appropriate in this branch.
Last edited by a moderator: Jun 24, 2018
Y

However, at the same time, experts believe, increased demand for goods and services will lead to an increase in prices. In the period from June 14 to July 15, Russia in connection with the world Cup will be visited by about 1.5 million foreign fans.

It is expected that on average, they will "give" the Russian economy $1.5 thousand each, that is, in General, will leave in Russia $2.3 billion (141 billion rubles), which will increase retail trade, as well as increase the demand for the national currency.

If now all foreign tourists in Russia spend about $ 2.3 billion a year, during the 2018 world Cup this figure will increase by about $1 billion.

This will have a positive impact on the sphere of non-cash payments in the regions, the increase in the points of acceptance of Bank cards can reach up to 40%. In turn, the increase in retail trade will lead to GDP growth: it will grow by 1-2 percentage points in the month and by 0.1 — 0.2 percentage points in the year. As for the impact of the Mundial on the ruble, experts believe it is uncertain: most likely the dollar may fall, but not more than 0.5–1 ruble.

It is expected that the rate of the national currency to a greater extent will still depend on the price of oil and possible new economic sanctions. If we talk about inflation, the prices will rise during the games of the championship by an additional 0.2-0.3 percentage points. In annual terms, this figure will be at least 2.5%.

However, the declared figures may not be realized in practice. According to The Association of tour operators, foreigners have issued a total of 360 thousand FAN ID (passports of fans, which give the right to free travel, as well as needed at the entrance to the world Cup stadiums).

Partnership dialogue: what Vladimir Putin and Emmanuel Macron talked about in St. Petersburg
01:35.
Vladimir Smirnov
On Thursday, may 24, at the Konstantinovsky Palace in Strelna, the talks of Russian President Vladimir Putin and his French colleague Emmanuel Macron, who arrived in St. Petersburg on a working visit, were held. This is the third personal meeting of the two leaders — after Putin's visit to Paris in late may 2017 and talks on the sidelines of the G20 summit in Hamburg in July 2017.

During the dialogue at the highest level, the parties discussed bilateral cooperation and cooperation, as well as a wide range of international problems, including the situation around Iran, North Korea, Syria and Ukraine. In addition, the presidents touched upon the issue of cyberspace.

Before the talks, the Russian leader welcomed his French counterpart and thanked him for accepting the invitation of Moscow and arriving at the head of the delegation to participate in the St. Petersburg international economic forum (SPIEF), where Macron will take part as a guest of honor.

In turn, the President of the Fifth Republic thanked his Russian counterpart, addressing him on "you", and expressed the opinion that Moscow and Paris can really work together and consolidate the forces of the two countries "to find joint initiatives".

Following a three-hour meeting, a ceremony was held to exchange documents signed following the talks between Putin and Macron, including agreements in the field of nuclear energy, oil and gas, investments in the medical rehabilitation sector in Russia, as well as agreements on cooperation in the field of culture, science and education.
Партнёрский диалог: о чём говорили Владимир Путин и Эммануэль Макрон в Санкт-Петербурге 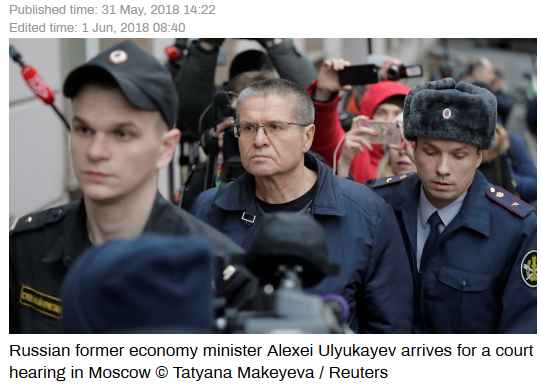 Former Russian Economy Minister Aleksey Ulyukayev, jailed for 8 years after extorting a $2 million bribe, has begun his sentence at a penal colony, the TASS news agency reported on Thursday.

Russian Justice Ministry’s Federal Service for Execution of Punishment, that manages the country’s prison system confirmed the reports but did not disclose the location of his detention.

Ulyukayev was detained in November 2016 on charges of receiving a $2 million bribe from the Igor Sechin, the head of Russian state oil firm Rosneft. Investigators found the minister demanded the payment for his support of a positive assessment that would allow Rosneft to complete a deal to purchase the government's stake in another Russian oil company, Bashneft.

The charges were based on Sechin’s testimony as well as on the evidence of a sting operation, in which Sechin personally handed a bag containing $2 million in cash to Ulyukayev, the then-economy minister.

In mid-December 2017 a court in Moscow sentenced Ulyukayev to an eight-year prison term and a fine of over $2.2 million. The maximum punishment for the crime that Ulyukayev was charged with is 15 years. In his remarks, the presiding judge said “Ulyukayev acted under a preconceived plan, motivated by personal gain and with full understanding that the process of the privatization of Bashneft depended on his decisions.”

The ex-minister pleaded not guilty at the start of the trial and continued to maintain his innocence up until the announcement of the verdict. After hearing the sentence, Ulyukayev said he considered it unjust.

His defense team confirmed that they would appeal the ruling. On April 12 this year the Moscow City Court upheld Ulyukayev’s fine and prison sentence, but excluded the ban on assuming posts in state agencies and state-run corporations.

Ulyukayev is the first government minister in Russia’s modern history to be found guilty of corruption by a court.
Click to expand...

The new Russian presidential state car continues to make waves following its debut last month, this time appearing with an entire convoy of Russian-built accompanying vehicles, including the Arsenal minivan.


The footage confirms the Russian presidential motorcade's long-awaited switch back to domestically-made state vehicles, dropping the tradition of using Mercedes limos started by Boris Yeltsin in 1995.

Work on Kortezh began in 2012, with $197 million invested into the project. Small quantities of the vehicles are expected to go on sale to the public starting in 2019. According to developers, potential clients in Russia and abroad have already expressed interest in their products. Engineers are continuing work on other vehicles for the presidential motorcade, including a motorcycle and SUV, called the Komendant, each of them expected to be introduced in 2019.

Speaking to Sputnik, former Russian test pilot Magomed Tolboyev touted the Sukhoi Su-57 stealth air superiority fighter as "the future of Russian combat aviation" and a plane which was created with the help of the most advanced technologies

He recalled that the Su-57 is capable of flying in a non-afterburning mode at a cruising supersonic speed of 1,600 kilometers (994 miles) per hour.

"An afterburning flight stipulates a huge waste of fuel, and the Su-57 can develop a cruising speed without using an afterburner. No one in the world can achieve this, neither France nor the UK, Rolls-Royce or Pratt & Whitney," Toloboyev pointed out.

He noted that "what is showed to the general public is just a tip of the iceberg and the rest is only available for us — professionals, test pilots and the country's military leadership.

"This know-how is top-secret information, which is why the future of the Su-57 should not be discussed by amateurs from the media," he concluded.

Tolobuyev's remarks came after The National Interest's staff claimed in their article that "the Su-57 does not have a particularly bright future" because the warplane is allegedly based on "the systems developed for" Russia's fourth generation Su-35S fighter.

The first test flight of the Su-57 took place at Zhukovsky airport on December 5, 2017. Flight tests were later resumed in February, 2018 and the plane made its debut at the Victory Day Parade on May 9 on Moscow's Red Square.

The Su-57 is equipped with a state-of-the-art avionics system capable of autonomous battlefield calculations, allowing it to assist the pilot.

Additionally, the plane is fitted with an active airborne phased array radar, which allows the Su-57 to swiftly detect air, ground and naval targets.

FOTCM Member
Sputnik
Eye Candy: Unusual Double Rainbow Hangs Over Moscow (PHOTO, VIDEO)
(updated 02:22 06.06.2018)
A rare and rather spectacular natural phenomenon has captivated Russian Instagram: an unusually bright double rainbow hung over the city for quite a while Tuesday.

Of course, a double rainbow is not a unique phenomenon, but it's actually pretty rare. It's caused by a double-reflection of sunlight inside raindrops.
Video
http://instagr.am/p/Bjpp8OEngiy/
Look how bright it is! In fact, the outer bow is always fainter than the inner one
http://instagr.am/p/BjqNFfGHrWL/ Perhaps the most fascinating thing is that the outer bow always has an inverted color pattern.

A double rainbow is considered a sign of good luck and is recognized as a wish-granter, just like shooting stars; unlike shooting stars, however, this one gives you a plenty of time to come up with a wish!
http://instagr.am/p/Bjp8knuBvRa/

FOTCM Member
Here it be. Sorry about that last post. Happy Russia Day everyone!

Thanks Gandalf I re-posted here on Events in Russia
Sorry again, for my error!

c.a. said:
Thanks Gandalf I re-posted here on Events in Russia
Sorry again, for my error!
Click to expand...

Translation
The world Cup has opened in Moscow. The Russian President spoke at the opening ceremony.

Looks like they deleted it youlik. So here's couple of second best's

FOTCM Member
Here's another video of Putin speech at the World Cup opening:

c.a. said:
Looks like they deleted it youlik. So here's couple of second best's

Translation
This video is not deleted, just need to view on YouTube. I have a link open, however, guys, sorry - it's in Russian. I don't know how to attach subtitles to it.

FOTCM Member
I don’t know if this is the right place to post this so please mods move if necessary.

I want to mention even in the uk Russia has been getting excellent press with regards to the World Cup organisation and atmosphere.

Some of the politicians here and in the USA must be spitting feathers or probably planning to throw a spanner in the works.

I’m a football fan even if the money involved in the game is preposterous. I’m so pleased that the world is seeing first hand the Russians aren’t monster’s as they’ve been portrayed. Our western narrative again is been shown up by the fact our media spews out lie after lie. All the reports from the ground in Russia are positive.

The FA chairman said today he wishes more fans were here to experience the hospitality and atmosphere. He’ll probably lose his job.