Everything Everywhere All at Once

Beware what you take into your soul.

Lots of very deep programming here. Plenty of agendas afoot including gratuitous perversity, unnecessary over-the-top violence and the required gender weird content. If you are psychically sensitive or susceptible to subliminal imagery overload, I advise caution.

Yes there are good and thoughtful messages and ideas here too, but they are laced with strychnine.

Don’t walk into this one without your psychic shields up and your strategic enclosure buckled up tight.

(For the record, in general, I love the Critical Drinker’s content)

I just want to provide some counterpoint here. YMMV, obviously. But, having seen this movie, to say nothing would be to agree I think it’s good.
Last edited: Oct 13, 2022

FOTCM Member
I agree about the gratuitous perversity (well there was one little bit in the movie I didn't like - during the security guard fight. It was obviously meant to just be a silly gross bit, but must've been aimed at people who are much more desensitised to apparently-common-nowadays sexual stuff, than I! I think the desired reaction to that was "cringe, ouch, LOL" but my reaction was "ugh, I wish they'd left that part out", it's the one thing that means I wouldn't show this film to my grandma.. Not sure if it's what you mean or not BHelmet)..

Didn't see any wokeness though.. Actually I thought the alternate reality version of the daughter character, with her increasingly bizarro drag-queen looking costumes, was a purposeful comment on the state of that kind of wokeness today.. she even said "I'm so tired" at one point, which is a thing I've seen people like that say hundreds of times on twitter. I could be wrong but I saw her as a direct reference to the nihilism of those people.

Anyways, that was my own 2 cents.. I found it really down to earth and heartwarming.. still have to watch it again and see if I still agree with myself. Very interesting how differently different people seem to find it! Maybe it's only one for people who were already into silly over-the-top Hong Kong martial arts films..

There was a previous thread about this film here BTW: Everything Everywhere All at Once (thread merge, mods?)

brandon said:
There was a previous thread about this film here BTW: Everything Everywhere All at Once (thread merge, mods?)
Click to expand... 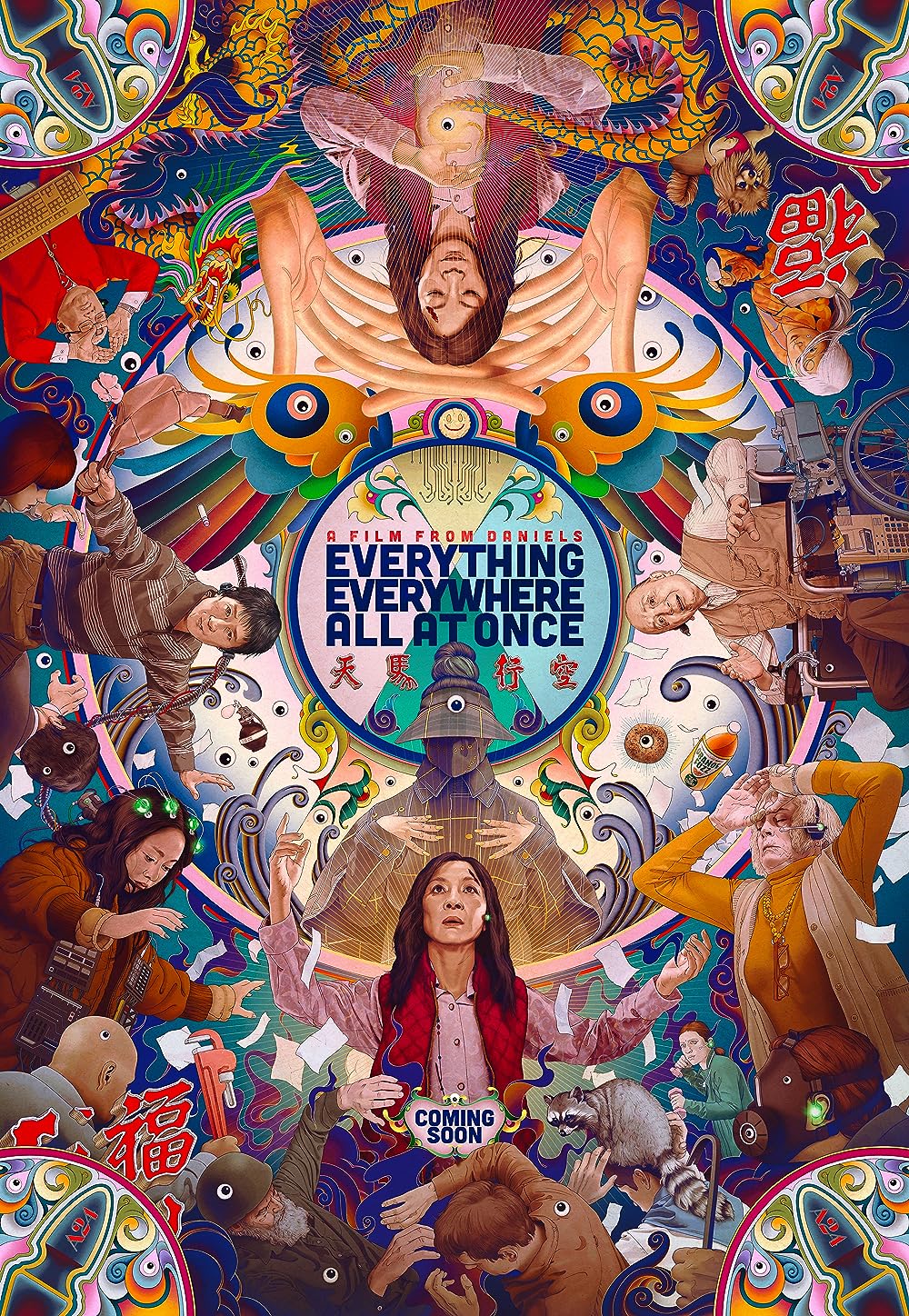 Everything Everywhere All at Once (2022) - IMDb

Everything Everywhere All at Once: Directed by Dan Kwan, Daniel Scheinert. With Michelle Yeoh, Stephanie Hsu, Ke Huy Quan, James Hong. An aging Chinese immigrant is swept up in an insane adventure, in which she alone can save the world by exploring other universes connecting with the lives she...

Yesterday I saw this movie. I highly recommend it. The film may offer some clues for the times we live in.

I watched the movie with my son. I thought out of so many movies this one will give us some ideas to discuss afterwards. I found it weird, sometimes incomfortable, obscenely funny...
But something happened to me when I left the cinema. Something boiled in me and I was ready to give it to anybody. I got upset with the wait at mcdo (my son wanted something quick) and my son tried to appease me but I turned to him with so much hatred and foaming at the mouth... I still feel ashamed.
I talked to him about it the next day trying to understand. He understood being aware of attacks. At the time of the event my strong fear was to be late getting to the airport after the movie to get my husband. A fear which shouldn't have had a hold on me. But the feeling was so strong.. felt like the mcdo and then my son were against me and that I had to strike back. Weird, weird, weird

Since then, talking with my son I realised that strong emotions coming out of nowhere are not mine and I question more my thoughts and emotions.
Lesson learned?!
T

Not the movie i would be concerned about. That said my discernment is not at its peak power. I do feel like far more worrying things happen in holy wood then what these directors engage in.

Turgon said:
One of the most inspiring, funny, dramatic and deeply moving movies I've seen in a very long time.
Click to expand...

Haha, glad someone else liked it as much as I did! I thought it was a credit to everyone who worked on that movie that they managed to include so much emotional depth in a Hollywood-friendly action format that is still accessible to the woke types and nihilistic post-Millenials. And the content is deeply thought-provoking as well.

I agree with brandon that some parts could be difficult to watch for some people; it's like the creators wanted to honestly present certain aspects of human nature as being as funny and ridiculous as other aspects, but the juxtaposition turns out to be quite eye-watering. I think you could show it to your grandma though, as long as she has a good sense of humour!

I watched Marvel's "Dr Strange and the Multiverse of Madness" in the same week, and as much as I like Sam Raimi's quirky directorial style, the difference in quality between the two multiverse-themed films was just so obvious. "Strange.." might have had the exemplary visual experience Marvel movies are known for, but aside from a few good comedic moments, the majority of the film was as formula as they come, with no really interesting exploration of metaverse concepts or implications.

Getting back to EEAAO though, I think it's a "must watch" and definitely a candidate for one of the best movies of 2022. In a time where cynical comedy and franchise flicks seem to be the norm, it's nice to watch a film that's both entertaining and inspiring, and speaks to the heart.

And Michelle Yeoh? Definitely the Queen of Martial Arts! 👑🥇🏆

Yesterday I picked up my daughter for a family evening of movies.
We cried uni sono watching 'Tolkien'.
Then discussion started what to do and whether to watch another movie. Daughter (claiming herself a 'student of cinematography from her sofa') suggested 'EEAAO'.
We played our usual game of mutual suspicion' strengthened by her mentioning that her 'movie-experts' friends think it a must see and best watched with family.
So that was where my lesson began. I even tried to supress the memory that having read this thread when it started I made a mental note to watch it.
In the end I agreed to the movie. Son went back into his room to read. Another strange thing for usually he spends his nights with gaming. I teased him that now he's honour-bound to read and leave the pc alone.
So suspicious mother and mistrusting daughter sat in front of the screen.
Our laughter soon lured son back to us and we had so much shared fun and laughter. We also had trauma and feelings of guilt touched and instantly hidden away again.
It took me a night and a whole day to realize that this movie beside being often vulgar, funny, visually overwhelming, absurd and deviant offers depth that is good to be reminded of.

Michele Yeoh's acting is superb- she represents 'all she can be' like a great pianist finds his keys. It's a joy to watch her.
Jamie Lee Curtis is a stunner - she gives it her whole natural body 'fully exhaling'. This will hardly become a new hollyweird trend but might contribute to energetically shifting away from the 'celebration of artificial beauty'.
I agree with those here that found great entertainment combined with a useful message. I also consider myself aware of what 'BHelmet' called 'laced with strychnine' but we must take our little lessons as they come. Not often have I been this well entertained while being slapped in the face with grace.

I've been disappointed with movies for a while and this might be the rare exception. Human imagination runs wild and anime has lots to offer but it rarely goes into something resembling a TOE. Imagination expanded is good, unless it gets reigned in by the technocracy.

FOTCM Member
I watched it on an international flight a few months ago. I didn’t like it but was compelled to watch it to the end to find out what happened. Agree with the opinions that it contains unnecessary perverse imagery. It just didn’t make me laugh.

FOTCM Member
I saw this tonight and I thought it was one of the best movies to come out in a long time. There is a lot of depth to the characters, and the fantastical elements had a wonderful slow burn to them where the movie continued to outdo itself. I was impressed the ending managed to tie together so much material from the rest of the film, which can be a lot to ask for in a story with multiverses.

I agree with the comments about some gratuitous perversity, but with Hollywood's increasing interest in capturing the market in China, the studios often construct movies such that some of the material deemed offensive to Chinese audiences can easily be edited out. Maybe we can watch those ones instead?

Everything Everywhere All at Once (2022) - IMDb

Everything Everywhere All at Once: Directed by Dan Kwan, Daniel Scheinert. With Michelle Yeoh, Stephanie Hsu, Ke Huy Quan, James Hong. An aging Chinese immigrant is swept up in an insane adventure, in which she alone can save the world by exploring other universes connecting with the lives she...

Yesterday I saw this movie. I highly recommend it. The film may offer some clues for the times we live in.