This could be a good solution to those of us that render our own lard and have no idea how to use these little scrap thingies I don't know their English name (in my country we would say "chicharrones", if someone have the word for them please feel free to help) that float around in the meltes lard. I've been trying to figure out how to use them until I found out that you can grind them and make a paste that's pretty much pork flour with lard.
I don't have exact measures or photos of the process because honestly, I wasn't even sure it would work and most of my former experiments with this ingredient failed miserably, so I'll give an estimate.

All you need for the fatty blinis is:

Use a food processor (I used a stick blender) to grind the lardy scraps together with the eggs and salt. Add one spoon of the warm water at a time, then blend, and keep adding spoonfuls of water until everything looks pretty much like pancake batter.
Pre heat a pan (I use a really old iron pan that is so used and cured that nothing ever sticks on the surface) on medium heat, or whatever you used in the past to make pancakes, add a drop of two of melted lard and one tablespoon of the fatty batter. Even out the surface with the same spoon you used as a measure and let it fry for a couple of minutes until it looks sturdy enough to turn. Then use a spatula to turn it, fry for one or two minutes and voila! Repeat process until there's no more batter.

Today it was my first successful attempt at this and I have to say that they're tasty, soft and handy. We used them as burguer bread and it was awesome. These blinis also look pretty decent (see photo attached) and quite bendy, so next time I'll try to make them larger to see if it works as wrappers to be filled with meat and veggies.

Ambassador
FOTCM Member
Those look delicious, skycsil!!! I'm not sure what the floating fat thingy's are called, maybe cracklings?

Sounds tasty--thanks for sharing the recipe!

It does sound like pork cracklings--I think pork rinds could probably work as well. Here's a thread on recipes involving pork rinds:

Lilou said:
Those look delicious, skycsil!!! I'm not sure what the floating fat thingy's are called, maybe cracklings?
Click to expand...

I think they're cracklings too :)

FOTCM Member
Thanks for sharing, they look good! That's something I might actually try, as I have some unrendered lard. I usually just eat the cracklings/chicharrones plain. They're really filling and tasty! I usually consider them 60% protein and 30% fat just like pork rinds, so 40g of cracklings plus 40g of additional fat is a meal.

Lilou said:
Those look delicious, skycsil!!! I'm not sure what the floating fat thingy's are called, maybe cracklings?
Click to expand...

I think they're cracklings too :)

No, those are pork rinds, made of the skin if I'm not mistaken. The mistery ingredient I used is actually the pieces of tissue that hold the pork fat together, after the lard is rendered. Not even sure there's a specific name for that

FOTCM Member
In Germany this is called Grieben or Grammeln - the left over bits when you make lard yourself. My online dictionary give as Spanish translation chicharro, chicharrón and as English translation I found crackling, tallow refuse and greaves. 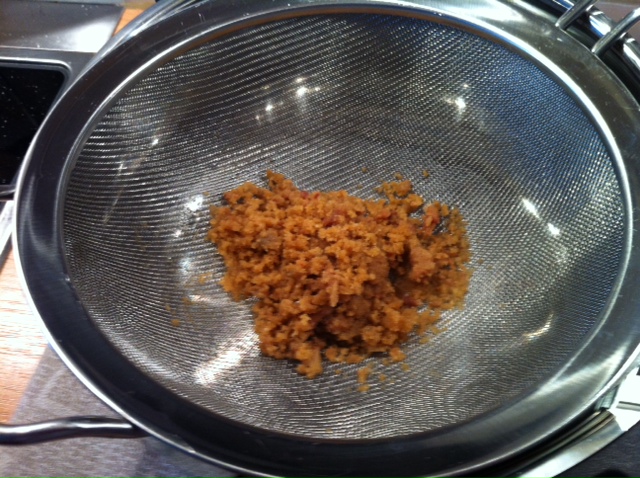 Dirgni said:
In Germany this is called Grieben or Grammeln - the left over bits when you make lard yourself. My online dictionary give as Spanish translation chicharro, chicharrón and as English translation I found crackling, tallow refuse and greaves.

Wonderful! That's exactly what I mean! Thanks Dirgni!