motherofrsd said:
As I understand from the second quote where there is saturated fat, the rate of triglycerides is low. This situation seemed to me the opposite of the first quote. And so I don't know if triglycerides are useful or not for health. Is the triglyceride form mentioned in both quotes different? I could not find what I missed. I'm confused about this. I would be appreciated if anyone interested in the subject helps me.
Click to expand...

Ok so here is a simplified way of looking at it:

Dietary fat is broken down in the gut to yield triglycerides (three fatty acids bound with a glycerol backbone).

Dietary triglycerides are absorbed through the lymphatic system, are transported through various organs and used directly as a fuel source, can be packaged up by the liver, or alternatively taken up by adipose (fat) tissues for storage. MCT oil is included in this camp.

Basically, high triglycerides in the BLOOD is demonstrative of metabolic syndrome (energy OVERLOAD), often fatty liver and visceral adiposity (fat around the organs).

In a healthy person, triglycerides are released all of the time from fat stores during any minor fasting periods. Also, triglycerides will spike after a meal, and then quickly go down shortly after. This happens because their other tissues take up the triglycerides from the blood very quickly to burn for energy.

In an unhealthy person (metabolically speaking) - when someones cells are already overloaded with energy, the cells not want any more. In fact, it is dangerous for cells to take up too much energy (glucose or fat), simply because they are not equipped to handle it and end up producing excess free radicals. Diabetes and metabolic syndrome are, at the most fundamental level, energy-overload conditions. Hence, cells will reject glucose, and cells will also reject triglycerides.

This leads to high blood glucose levels in conjunction with high triglyceride levels, and is generally very dangerous for numerous reasons.

It is actually for this reason that ketogenic diets and/or fasting works so well. Fasting causes the cells to use up the energy they have stored up, reversing the "energy overload" and rapidly causing them to take up glucose and triglycerides. This causes a drop in blood levels, and also promotes the breakdown of fat stores to release more triglycerides to meet the increased demand of energy.

It is also the primary reason that intense exercise also works so well for these energy-overload conditions. It is using up the energy stores inside the cell, removing the "block" on metabolism, and allowing cells to take up more energy (glucose and fat).

The primary determinant of whether a cell takes up energy (is insulin resistant or not), is intracellular demand for energy. When there is little demand, then cells will reject it. Therefore, any strategies that can be used to increase energy demand will, by definition, also be effective at reversing metabolic conditions
Last edited: Nov 21, 2020

@Gaby @Lukasz @Keyhole thanks for sharings. You are all very kind.

Let me check
In a very very simple way, whether triglycerides are good or bad markers depends on their free flow in the blood or being used in organs and cells. So I will go on eating butter and coconut oil but stop or minimize having sugar and carbs. Then, my cells use fats for energy.

Gaby said:
"Diet research of the sott.net forum - A summary of the science background" is ready: 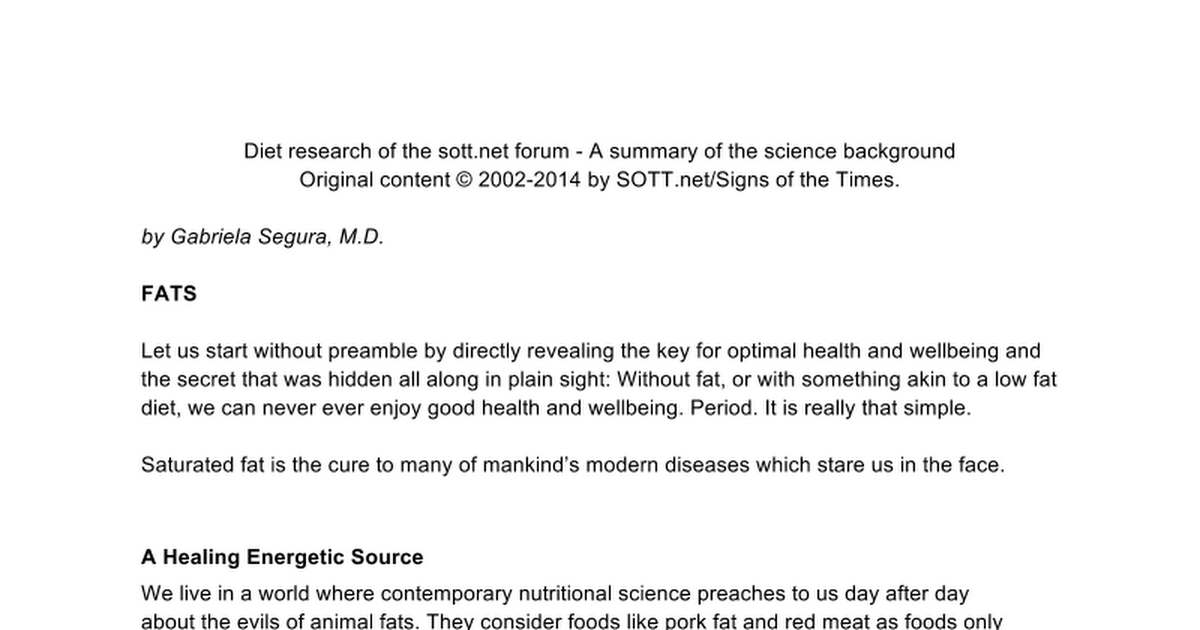 Diet research of the sott.net forum - A summary of the science backgroundOriginal content © 2002-2014 by SOTT.net/Signs of the Times. by Gabriela Segura, M.D. FATS Let us start without preamble by directly revealing the key for optimal health and wellbeing and the secret that was hidden al...

Dear Gaby,
Im starting to inform on keto diet, and as i'm french natural speaker it's easier for me to read such detailed information in french.
I allowed myself to (quickly) traduct your document to french : from the original document, i saved it to docx then traduced it by google translate (I wanted to use deepl, but it fails :( ). Then pasted the results in a new docx document + save + also created a PDF version of it.

It's auto traduction so it's not perfect, but i wanted to know and ensure that you are ok if I post them back here ? (or i can post them in the Resources section of the forum if i'm allowed to ?) Please advise.

dredger said:
It's auto traduction so it's not perfect, but i wanted to know and ensure that you are ok if I post them back here ? (or i can post them in the Resources section of the forum if i'm allowed to ?) Please advise.
Click to expand...

No need to re-post an automated French version here. If you have questions regarding the ketogenic diet, you can use the main ketogenic diet thread, as there are more updates and experiences available over that thread.

Gaby said:
No need to re-post an automated French version here. If you have questions regarding the ketogenic diet, you can use the main ketogenic diet thread, as there are more updates and experiences available over that thread.
Click to expand...

I did it because I plan to first read the document, then go on with the thread (which will take a long time to parse all), and even if i understand well english, this will remain far from a good understanding than if i read it in french. And this is partially because i suppose that other (french) here have the same "problem" that I proposed to share it, and the other reason is for some of my relatives who can't read english. As it's your work for the community, i ask you if, even if not perfect traduction, i can share it to some relatives ? (note to be honest, i already shared it to my cousin as we daily work together

I think that if i ask question in the future, it's not in the short term, the thread is not a small one, and the "life without bread" thread should also be read if i well understood.

Moderator
FOTCM Member
You can share with your relatives, but more so, I don't recommend this document to my patients or loved ones because it's a synthesis for a work that is too specific and difficult to make, and that they might not be ready to do (or even might be detrimental to do without guidance).

I think your loved ones will benefit more if you recommend them books on the subject that are more approachable by the general public and that are available in French already. For instance:

Voici une liste d'ouvrages en français, traduction ou équivalent des livres anglais recommandés. Here is a list of books in French, which are translations or equivalent of the recommended books in English (Link for the Guide to the Recommended Books and related material and resources )...