Moderator
FOTCM Member
Huge fireball reported over southern China early Wednesday morning. Locals reported hearing a huge bang. It apparently lasted for around 3 minutes and was detected by the regional earthquake centre, and they believe it may have reached the ground.

I haven't had much time to look into it but there's apparently official confirmation from Chinese agencies, there's videos taken from Chinese social media and shared by the American Meteor Society, and an article with a number of images and a video (which i am unable to embed) from the Daily Mail: 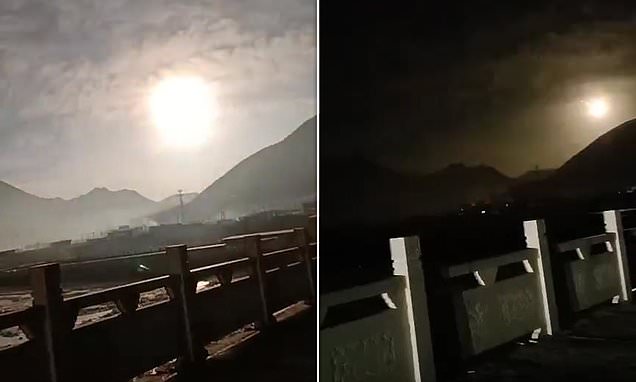 Footage taken by stunned locals shows an unidentified object exploding into a blazing sphere as it plunges at a fast speed towards the county of Nangqian in north-western China today.

Huge ball of fire 'falls from the sky and crashes into a Chinese county', leaving locals stunned​

By Billie Thomson For Mailonline


A giant fireball has been spotted flashing across the sky and crashing into a county in southern China.

Footage taken by stunned locals shows an unidentified object exploding into a blazing sphere as it plunges at a fast speed towards the earth.

It is not immediately clear what the ball of fire is, but local media are suggesting the possibility of a very bright meteor. No casualties have been reported. 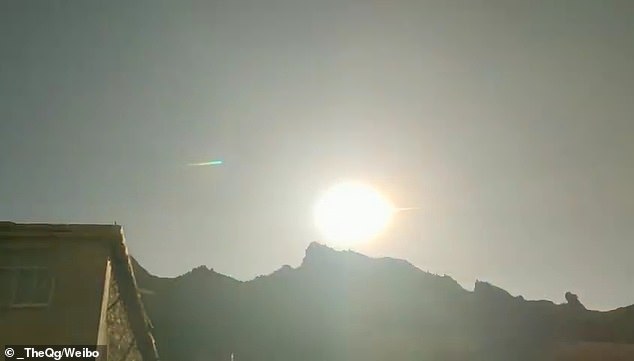 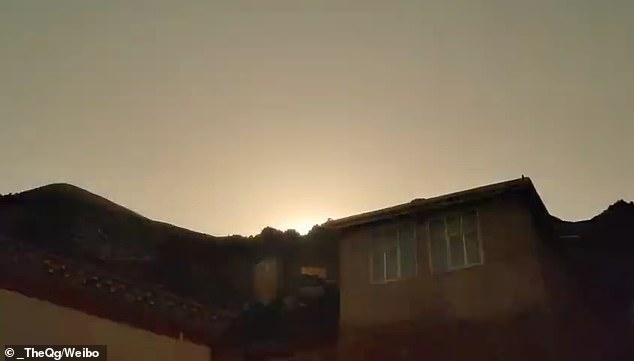 Various clips on the Chinese social media show the suspected meteor lighting up the sky as it plummets into the county of Nangqian in north-western China's Qinghai Province.

The incident is said to have occurred at around 7am on Wednesday. Local residents reported they had heard loud bangs.

One of the videos, shared by a science blogger on Twitter-like Weibo, captures the moment the fireball soars through the darkness as it is seen by a passenger on a flight from Xi'an to Lhasa. 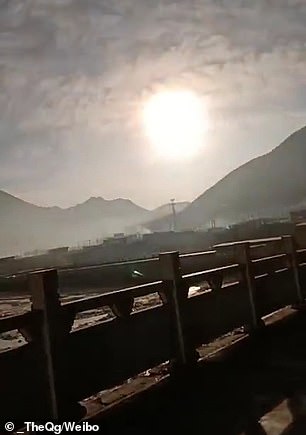 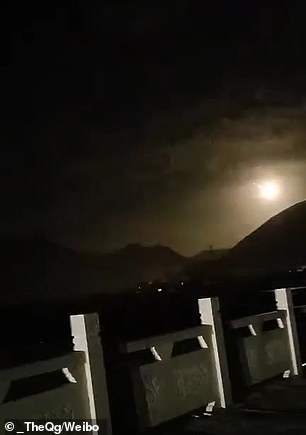 The incident is said to have occurred at around 7am on Wednesday in north-western China
In another piece of footage, the burning object is seen descending quickly towards hills and fields.

In a third clip, the fireball becomes brighter and bigger as it approaches the ground.

Dan Ba, a local, said he witnessed the fireball while taking his child to school. 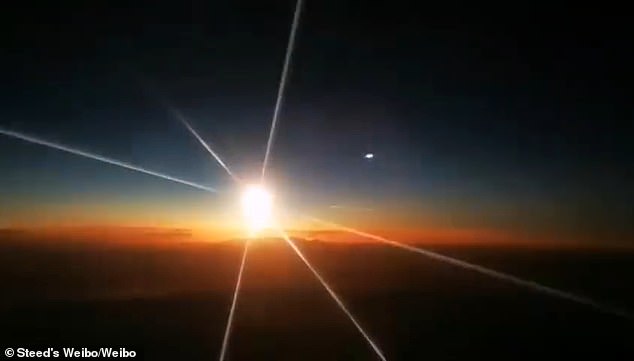 One of the videos, shared by a science blogger on Twitter-like Weibo, captures the moment the fireball soars through the darkness as it is seen by a passenger on a domestic flight


Yu Jun, chief writer of Chinese science website Guokr, told Beijing News that the fireball looked like a bolide, which is a very bright meteor.

China Earthquake Networks Center said it had recorded the incident. The authority said through its social media account that a suspected bolide landed near the border between Nangqian County and Yusu County at 7.25am.

The Nanxiang County Government told Red Star News that it had heard of the matter but was unclear of the details.

Explained: The difference between an asteroid, meteorite and other space rocks​

An asteroid is a large chunk of rock left over from collisions or the early solar system. Most are located between Mars and Jupiter in the Main Belt.
A comet is a rock covered in ice, methane and other compounds. Their orbits take them much further out of the solar system.
A meteor is what astronomers call a flash of light in the atmosphere when debris burns up.
This debris itself is known as a meteoroid. Most are so small they are vapourised in the atmosphere.
If any of this meteoroid makes it to Earth, it is called a meteorite.
Meteors, meteoroids and meteorites normally originate from asteroids and comets.
For example, if Earth passes through the tail of a comet, much of the debris burns up in the atmosphere, forming a meteor shower.
Click to expand...

Moderator
FOTCM Member
A few more videos including the vapor trail, and some data points (which are too technical for me!) on the fireball mentioned above. It's also up on SOTT: 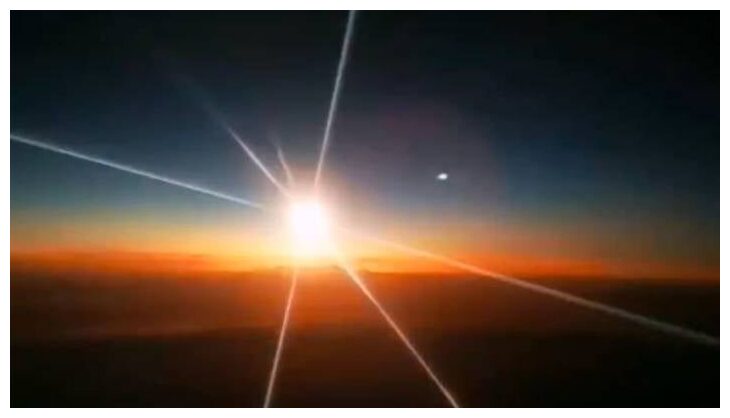 A suspected low-flying meteor has lit up the sky in northwestern China's Yushu City on December 23. Video from the event in the city in China's Qinghai Province showed a bright fireball streaking across and lighting the dark sky. According to...

Taken from NASA's Center for Near Earth Object Studies - Fireballs
Click to expand...

FOTCM Member
https://twitter.com/i/web/status/1342098196315557888
It's Christmas Eve tonight. This is a view of the large fireball that flowed at 1:59 on December 25, 2014, with a camera pointing from Fuji to the southeastern sky. A shock wave sound was observed in Shizuoka prefecture, and a meteorite fell into the sea near Izu Oshima. It may have been a Christmas present given by Santa.

I'll bet five buck's its related to (2020 YM1) or couple of other NEO's in the neighborhood.

itellsya said:
Huge fireball reported over southern China early Wednesday morning. Locals reported hearing a huge bang. It apparently lasted for around 3 minutes and was detected by the regional earthquake centre, and they believe it may have reached the ground.
Click to expand...

For interest, The Economist has put out a video 'The World in 2021: five stories to watch out for' on YouTube

The relevant section is from 14:40 and describes a planned NASA experiment to change the momentum of a small asteroid orbiting a larger asteroid. It's possibly a programmed bias, but I've always been suspicious of people who are describing a very serious thing, but look like they're smiling at the same time.

FOTCM Member
A newly-discovered asteroid made a close approach to Earth on December 28, 2020.

FOTCM Member
Regarding fire ball around West Virginia on 12/27 - this was posted in another thread but posting here since relevant:

Although, AMS is stating it’s a contrail lit up by the sun

Could be some classic damage control - “Nothing to see here, folks...”

Was there a fireball in West Virginia? AMS proves video false!

A video showing an object flying through the sky in West Virginia has been shared on Twitter and has already gathered thousands of likes.

FOTCM Member
And just for comparison, here’s a YT vid of a plane and it’s sun lit contrails:


It’s plausible the W. Virginia event could have been a contrail, but when zoomed in, based on the angle and trajectory I would expect to see a plane in front on the contrails. So, where’s the plane?

In 2008, something unique fell out of the sky over Sudan, exploding into fragments across the vast, arid expanses of the Nubian Desert.
This hurtling object from above became known as Almahata Sitta: a collection of roughly 600 meteorite fragments, painstakingly recovered by researchers, and taking its name – 'Station Six' – from a nearby train station.

What was unique about Almahata Sitta is that it represented something unprecedented in astronomy: the first time an asteroid impact was successfully predicted in advance by scientists.

Ever since, the splinters of that asteroid – called 2008 TC3 – have been analysed by researchers, looking for chemical clues to the origins of this mysterious, far-flung visitor.

Now, a new study fleshes out that intriguing back-story. 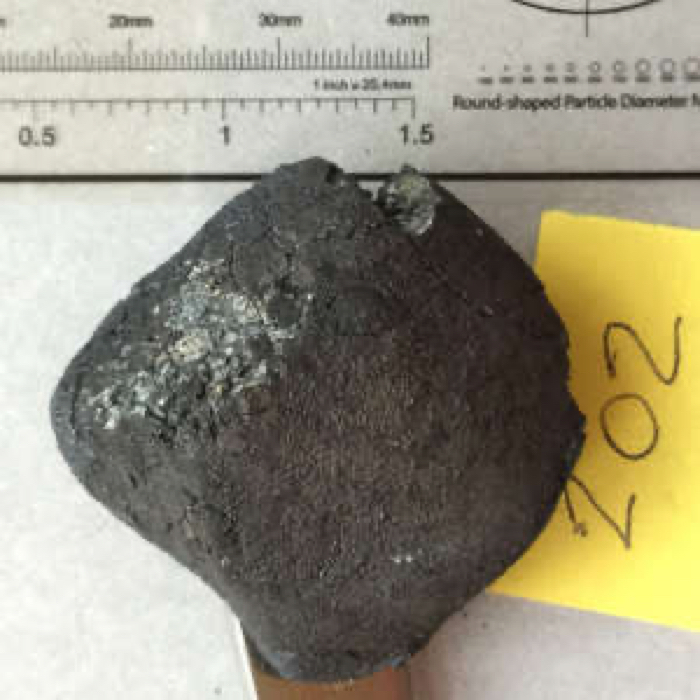 In the new work, Hamilton and fellow researchers didn't have much to work with, analysing just the tiniest of slivers of this remarkable space rock.

"We were allocated a 50-milligram sample of Almahata Sitta to study," Hamilton explains. "We mounted and polished the tiny shard and used an infrared microscope to examine its composition."

The spectral analysis revealed something the scientists didn't expect to find. Inside the shard – a fragment called AhS 202 – an extremely rare form of hydrated crystals was found, known as amphibole.

This mineral type requires prolonged bouts of extreme heat and pressure to form, of a kind not usually thought to be possible in carbonaceous chondrite (CC) meteorites. 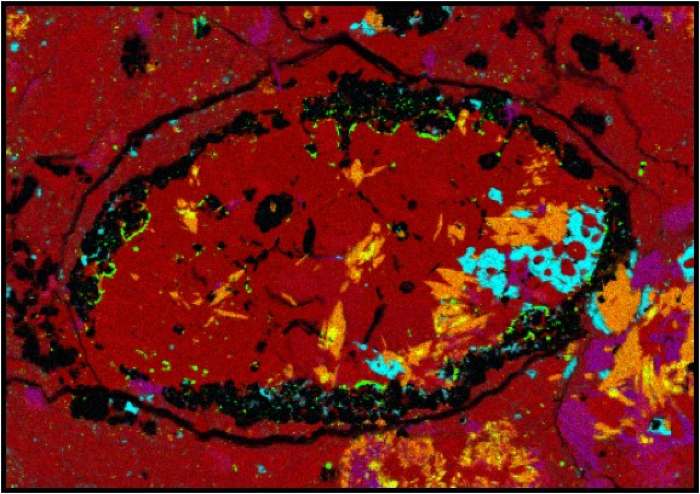 
The implications suggest that 2008 TC3 most likely once belonged to a much, much larger body – something so large in fact, that it would virtually be in the same class as Ceres: the dwarf planet, which represents the largest known object in the Solar System's main asteroid belt, in between the orbits of Mars and Jupiter.

"Most CC parent bodies are thought to be less than 100 km in diameter, and thus would not be sufficiently large to produce the range of pressure and temperature conditions represented by the mineral assemblage in AhS 202," the authors explain in their paper.

"As such, it is our interpretation that the original parent body of AhS 202 was probably an unknown object, potentially Ceres-sized (~640–1,800 km in diameter under the most likely conditions)."

While this mysterious, giant asteroid is thought to no longer exist, the fact that it once inhabited our Solar System suggests that more of its kind could potentially have done the same, even though we haven't found evidence of these large, water-rich bodies in recovered meteorite fragments prior to 2008 TC3.

In the same way that asteroids Ryugu and Bennu are revealing some surprises in composition that differ from most known meteorites, 2008 TC3's manifold splinters are proving that there's more to space rocks than current hypotheses can fully explain.

"We are not proposing that AhS 202 is a spectral analogue for Bennu or Ryugu; rather, AhS 202 is a serendipitous source of information about early Solar System materials that are not represented by whole meteorites in our collections," the researchers conclude.

"The difference between its mineralogy and that of known CC meteorites suggests that unique samples like AhS 202 (and xenoliths in other, non-CC meteorites) could be crucial missing links in our understanding of the diversity of parent asteroids."
The findings are reported in Nature Astronomy.
Click to expand...

Reference:
2008 TC3 few hours before the impact
•Oct 8, 2008 / 0:31
A tiny asteroid 2008 TC3 was discovered by astronomers a day before it entered the atmosphere in Northern Sudan and exploded. The video shows animated motion between the stars few hours before the impact. Images taken from the Črni Vrh Observatory in Slovenia with a 60 cm telescope and a CCD camera. http://www.observatorij.org

Near Earth Asteroids
Potentially Hazardous Asteroids (PHAs) are space rocks larger than approximately 100m that can come closer to Earth than 0.05 AU. None of the known PHAs is on a collision course with our planet, although astronomers are finding new ones all the time.
On December 30, 2020 there were 2037 potentially hazardous asteroids.

FOTCM Member
NASA has issued a warning that a huge asteroid will move past Earth on January 3, 2021 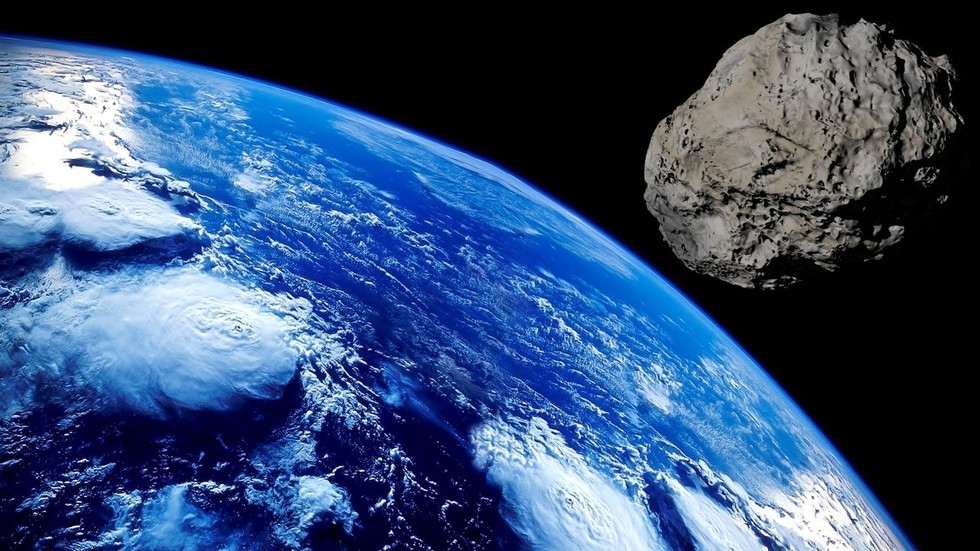 As nations across the globe say ‘good riddance’ to 2020, NASA has warned that a monstrous 220-meter asteroid is headed Earth’s way early in the new year.

FOTCM Member
A newly-discovered asteroid made a close approach to Earth on January 1, 2021.

FOTCM Member
And another one! 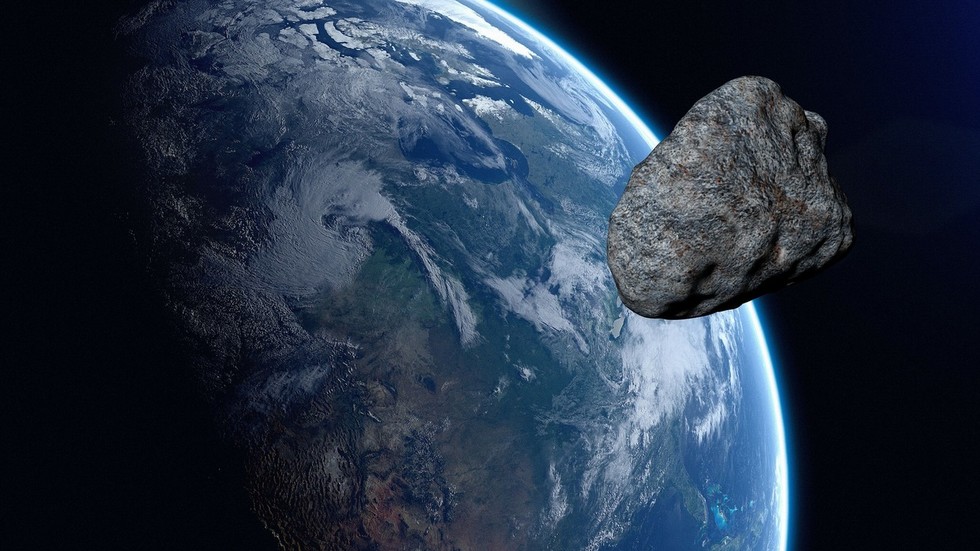 The new year is off to a rocky start as, days after a 220-meter asteroid flew past Earth, an even bigger space object is en route. To make matters worse, infamous seer Nostradamus predicted an asteroid strike some time in 2021.

FOTCM Member
A newly-discovered asteroid made a close approach to Earth on January 3, 2021.

FOTCM Member
藤井大地 @dfuji1
It looks like a long-path meteor that flowed at 23:02 on January 9, 2021 was seen with a wide-angle camera facing the high sky north of Fuji. It wasn't bright enough to be called a fireball, but it was a long-path meteor that kept shining for more than 5 seconds. It was a remnant of the Quadrantids meteor shower, which peaked before dawn on January 4.

Robert Evans, visual supernova hunter. He discovered 42 supernovae between 1981 and 2008, the most of any visual astronomer in history. Note the how he put the designations of his prey on the telescope. Image by Roger Ressmeyer/Corbis
Click to expand... 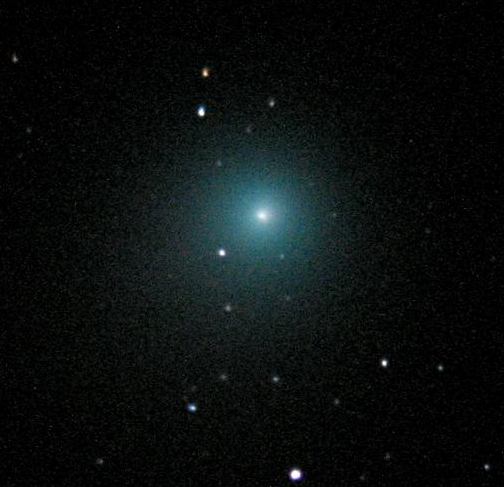 2015 NU13 is a very small asteroid whose orbit crosses the orbit of Earth. NASA JPL has classified 2015 NU13 as a "Potentially Hazardous Asteroid" due to its predicted close pass(es) with Earth.

Another asteroid will fly by Earth today.