Administrator
Moderator
FOTCM Member
Programming complete? Or do they want 100%? 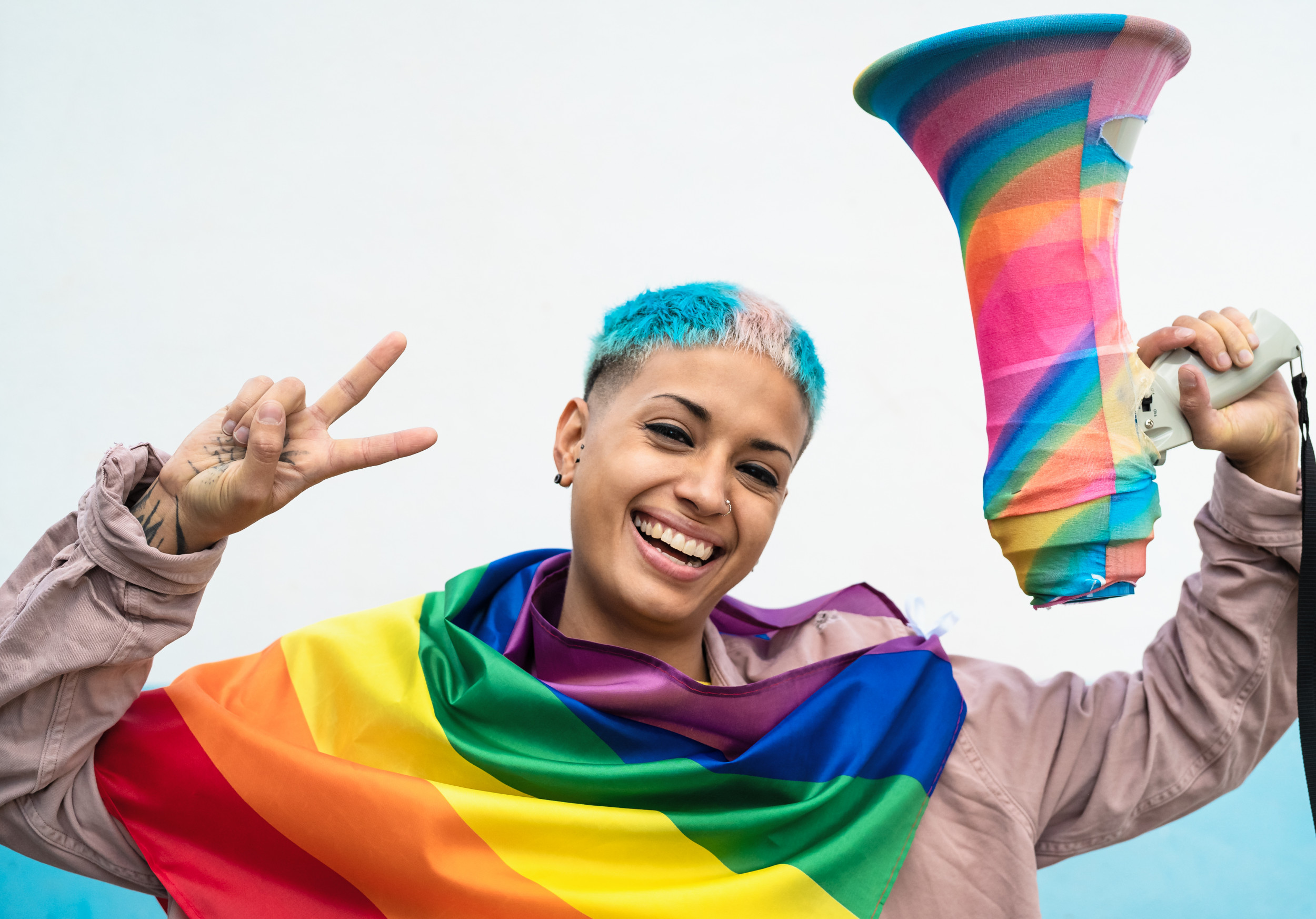 The results differed significantly from a February Gallup poll that showed just 5.6 percent of U.S. adults of all ages are not "heterosexual or straight."

Ambassador
FOTCM Member
As for what it says, if Christians are only slightly lower statistically, Huston we have a problem across the board.

"It fits into the larger narrative. Millennials are a group that has trouble creating lasting, meaningful relationships," says Barna. "If their sense is that some of the people they want to be friends with — and a group they want to be accepted by — is LGBTQ, then they'll identify with them. It's about image, belonging and acceptance."
Click to expand...

However, was looking for that specific study from the Culture Research Centre, and did not find it, although it might be contained within something not seen. One study did show the relationship of their trust levels (influencers), and it is not high in perhaps a few of the right places (celebrities and journalists were in the gutter), categories that currently do not merit full trust in society. So, maybe there is some hope that they can find better future honesty to help raise their trust levels, which might help to lower the above articles percentage for Gen Zs (and that is rater a significant gulf between age groups):

FOTCM Member
I think many might feel pressured because you are either part of the alphabet people or you are a nazi.

48 Percent of U.S. Gen Zs preferred socialism was also in the poll said:
"Prefer socialism to capitalism" was next at 48 percent and "LGBTQ" was last at 30 percent. The order is similar among the 18-24 demographic that has LGBTQ nine percentage points higher.
Click to expand...

The destruction of the minds of the youth is painful to see. My grandchildren are totally brainwashed and they believe they are the vanguards of a better future. So sad.

I think it's a little more nuanced than the survey would have you believe. "Identifying" as gay or lesbian or straight per your sexual preferences, doesn't mean by default you agree with or are a part of the culture. As with any "minority" it's the loudest of the group that paints the biggest picture, but don't get lost among the trees and instead look at the forest.

You can look at the disintegrating left to see the similarities cause they are almost one in the same, namely, more and more gay and lesbian people are speaking out saying "not my culture." That is, if 50% of people identify as gay, perhaps 20-30% don't agree or partake in the lifestyle, namely: isn't into clubs, drugs, tranny drag queens, or cult mentalities.. And if you got an honest answer, many gay people actually are in opposition to the trans movement, as well as identify as conservative in their values, and are routinely ostracized from the cult.

Of course, speaking strictly of millennials, perhaps the percentages are skewed, as my experience and perception includes a wider age range.

Most people, gay or straight, just want the same things: a stable environment, a purpose to the (wider, human) community, and a solid place to call home.

Yes there are the extreme idols to the cult, but that isn't representative of the whole. And as the article says, a lot of people say they are bisexual simply to prove their "acceptance" but these people will never actually be in a same sex relationship.

And on the topic of sex and gender, while the gay/lesbian culture is undoubtedly a brainchild of the Marxist left, it will be the same left that will end up tearing it all down unwittingly. I mean specifically the trans movement. I think a lot of gay people are angry that all this time, the fight has been to have acceptance of same sex partnerships, but all of a sudden, now my men are women and women are men. To be fair though, this is also destroying some hetero relationships as well, really they just want to tear it all down.

And you know, same. The difference is over my dead body will the globalists build a new society in their image. If this is the result of 309k years of STS rule, then game over, dead end.

So thanks, STS. Thanks for tricking me along with all of humanity oh so long ago. You've given me everything I could ever need to know without a shadow of doubt that I will never again make the same choice twice. It was never a mistake, oh how they want you to believe it was. No, I'm all the wiser now for the experience, and full of a rage so divine. Not for myself, but for those we can't save, and for those we still can.

Once lost, now found. And what I've found was worth being lost.

Moderator
FOTCM Member
60% must be persecuted for LGBQTUVWXYZ hesitancy with an indoctrination pass.

Joe said:
Programming complete? Or do they want 100%?

The results differed significantly from a February Gallup poll that showed just 5.6 percent of U.S. adults of all ages are not "heterosexual or straight."

Clearly, identify LBGTQ is on the rise, but I wouldn't say I observe that 40% of the 10-25 year olds I've seen would identify as LBGTQ and I live in an area that is somewhat of a hotbed of that culture. If I had to take a guess, it's likely lower than 10%. Could be quite wrong though! It isn't exactly appropriate to be asking 10-25 year olds about their sexuality!

FOTCM Member
The criteria one uses to establish an identity and how far one delves into the nuances can also skew things a lot. I could give myself such a survey and come up with some interesting results. For example:

Sometimes I think guys are hot; I must be gay.

But sometimes I think girls are hot; therefore I can't be gay, but maybe I'm bi.

But the brass tacks of a relationship with a guy seem like a stretch, although not impossible; I might be straight after all.

But, I avoid sexuality like the plague, relationships are simply not worth the trouble and potential for disappointment; I must be asexual.

However, my celibacy is very much forced, it is not organic, so while asexuality is sort of a lifestyle, it doesn't reflect any internal reality regarding the forces of sexual attraction and how the external stimuli of such affect me.

I cannot be lesbian unless I identify as a woman, which...is just not gonna happen.

I'm not trans, and since I believe that sex=gender (there are many who don't) there is no way I can be anything other than male unless I get a sex change, which I have no interest in.

Therefore, by process of elimination, I conclude this little exercise with the declaration that I must be questioning. Well, I'm certainly questioning a lot of things, so if the shoe fits...

Additionally, if I were in a relationship with someone, for the sake of practicality and simplicity my identity would likely align with whatever lifestyle we ended up in to make the relationship work. As the article infers, identification is influenced by a lack of meaningful sexual relationships, and if one's life is devoid of them, it is easier for one's perception of their sexuality to remain in a superposition of potential states.

If I were to take a probabilistic measurement of my internal sexual proclivities, I could arrive at 80% straight and 20% gay, which makes me straight for all intents and purposes, however...things could happen, and since I'm living the "asexual lifestyle" it's meaningless anyway. All of this brings us back to my opening statement concerning the minimum threshold one needs to cross in order to apply a label.

FOTCM Member
I wouldn't take it too seriously - "bisexual", "non-binary", and "queer" are effectively meaningless for a lot of the crowd claiming these things without actually engaging in homosexual activity or going about a sex change. Entirely possible that enough wokes out there would claim to be LGBTQ to be virtue signalling edgy without being serious about these things to get up to 40%.

FOTCM Member
Here is the link to the study by the Arizona Christian U. Even if the actual numbers were cut by half (down to 15 from 30% identifying as LGBT overall, and down to 19.5 from 39% for the 18-24 cohort) they are still VERY telling.

Ambassador
FOTCM Member
Who knows, I think it is telling, the fact that it has become so prevalent in the mainstream media and about every form of entertainment, has had an impact, I also think it's a sing of the times.

But I also think that a lot of these kids have no clue what it really implies to identify as something or other, and they may be riding the wave of it being cool for the time being.

Interesting, as is the boomers' significant end-of-program obsession with cat memes. Does anyone have the text of the poll?

fifty_five said:
Does anyone have the text of the poll?
Click to expand...

The data is not there, just the results. The Endnote discusses where a person might get further information.

Navigator said:
Here is the link to the study by the Arizona Christian U.
Click to expand...

Thanks Navigator for the link.

Voyageur said:
The data is not there, just the results. The Endnote discusses where a person might get further information.

thank you, sorry for the unseen. something like at page 86 of the study. for the millennials here, first and just for fun: ask, who investigates who and how the pool participants are determined and who pays for it. second and in any case, don't answer unless you want to become a ponerised newsweek source