I don't know the tech details, but I was able to watch the show without logging in (which I rarely do). It is possible though that FB has its way to track us even with relatively secure browsers etc. and allowed me to watch it because I do have an account even though it's dormant.

Administrator
Moderator
FOTCM Member
It looks like we're back on YT because I successfully uploaded the latest video there. 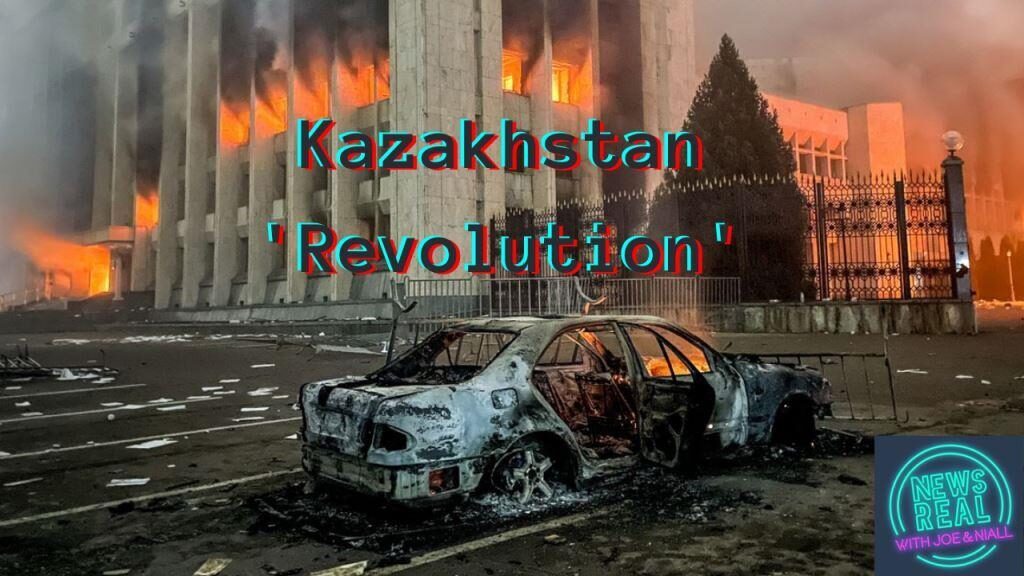 NewsReal: Kazakhstan on Fire: Why US vs Russia 'Great Game' Could Spark Global Economic Collapse -- Sott.net

As tensions flare between the US and Russia over Ukraine, an apparent 'revolution' has gripped another country neighboring Russia: Kazakhstan. Large protests broke out there last week over a gas price rise, and these were abruptly superseded by...

Niall said:
We're back with our first show of the new year... in one minute!
Click to expand...

That it was taken down is incredible, if that had happened a few years ago like that, it would have been more of an issue, today it is simply another one in the list among many. Might it be that it happened during the show, when the comment function collapsed? And what would be needed to edit out in order for the edited show to stay up?

In general, there are often great segments that could be selected and made into smaller clips, and shared on various platforms. I guess they should have a NewsReal "cover".

In from NewsReal: New Year, Same 'New Normal': Mass Formation Psychosis & Crowd Psychology -- Sott.net I took the show comments, organized them according to time, and added a few comments:
00:00 Introduction - Happy New Year
02:12 Canada (Quebec-Ontario)
07:10 Retired Sky News boss Mark Sharman on MSM control of vaccine information
11:12 Life inside the fear factory: how the Government keeps us on high alert
(Relates to Life Inside The Fear Factory: How The Government Keeps us on High Alert -- Sott.net).
The above two could be one clip or two. If you make clips, I guess it would be helpful to either begin or end with a short NewsReal
17:12 Dr Malone warns of dangers to children from Covid 'vaccines'
24:33 The section about Dr. Malone on Government and Mass Psychosis begins
26:02 Prof Mattias Desmet explains Mass Formation Psychosis
36:48 Dr Malone breaks it to Rogan that government might be doing all this for political purposes
47:56 Dr Malone explains Mass Formation Psychosis to Joe Rogan
1:08:33 Fauci backpedals, distinguishes 'from' and 'with' Covid 'cases'
1:11:03 Ontario mayor calls for overhaul of 'misleading' COVID-19 hospitalization data
1:13:11 Tony Blair and psychopathy in government
1:21:44 VAERS - serious side effects
1:24:45 VAERS - 12-18 year olds, serious side effects
1:26:00 VAERS - serious side effects continued
1:28:05 Covid outbreak in 'fully vaxxed' Antarctica
1:32:02 Ukraine crisis

To complement the discussion of mass psychosis, there is an Objective:Health show 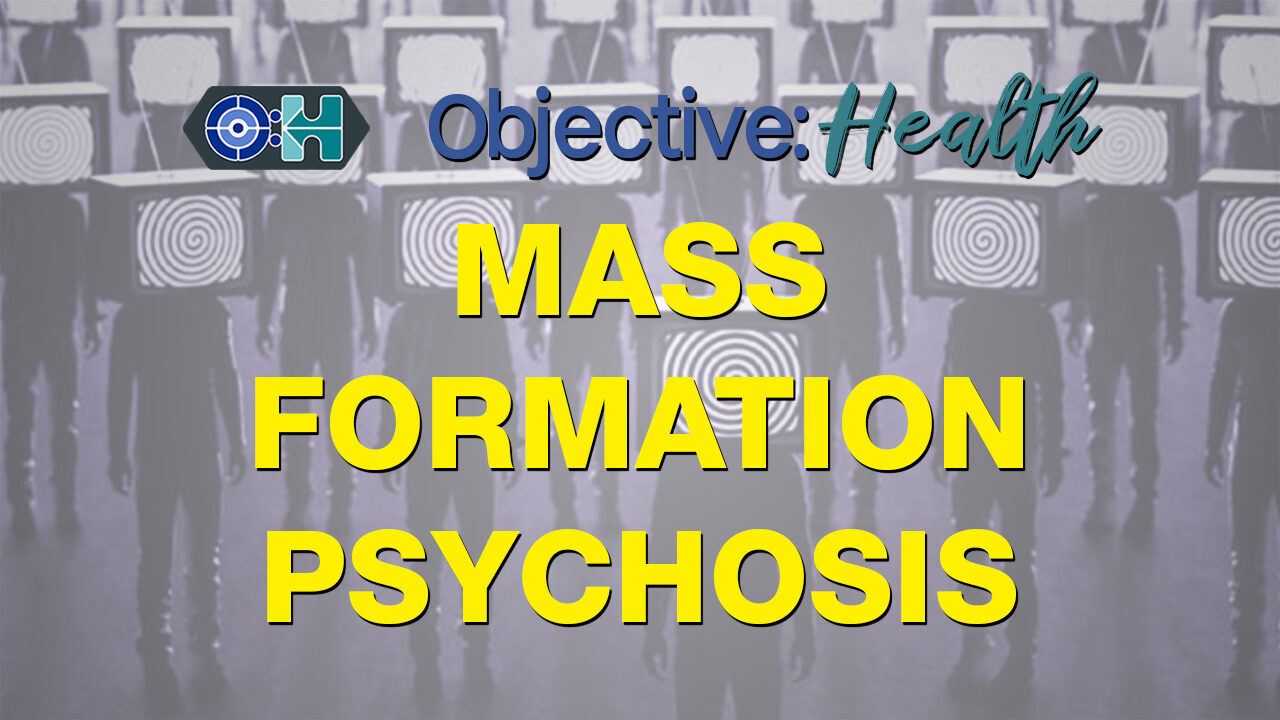 Mass Formation Psychosis has been allover social media of late, after it was explained by Dr. Robert Malone on his widely censored interview with Joe Rogan. It's made such a splash that the control system has gone into high gear trying to...

www.sott.net
And these Sott articles:
Mass Formation Psychosis - Dr. Robert Malone / Dr. Mattias Desmet
One article features this video: MASS PSYCHOSIS - How an Entire Population Becomes MENTALLY ILL
But it has a follow-up on YouTube: The Manufacturing of a Mass Psychosis - Can Sanity Return to an Insane World?

This video Vaccine Hesitancy EXPLAINED gives some examples, (UK focus) of how many people are run around in circles to believe what the government wants. (I agree with most of what he says, but the lab assisted virus story stops in China, where I think a mention of a US lab (Fort Detrick) would have been very justified.)

One can hope that some, who have woken up so to say, have learned the lessons from this Covid experience. There is still the trouble with Transfer of learning. Transfer of learning has been a persistent problem for educators, since knowledge learned in one context does not necessarily transfer to become available for the learner when he is faced with a problem that requires him to apply the same knowledge in a new setting. This phenomenon explains that many people, even in the alternative media, took some time to get used to the idea that the Covid scare was more of the same which they have been noticing for years, only moved to a new arena, that of health.

Administrator
Moderator
FOTCM Member
So the question is: does saying "if you don't take a vaccine you will die" 5 times in the first 10 mins of a YT show, constitute the kind of 'medical misinformation' YT is looking for to justify deleting your video? We shall see!

Ambassador
FOTCM Member
Today Joe & Naill also talked about the volcano that erupted in Tonga yesterday (it seems to be a biggie?) and they also mentioned the Mount Tambora (in the Dutch East Indies) eruption of 1815 which was so powerful that it ended the Napoleonic wars and caused the Year without Summer.

The bright sun was extinguish'd, and the stars
Did wander darkling in the eternal space,
Rayless, and pathless, and the icy earth
Swung blind and blackening in the moonless air;
Morn came and went—and came, and brought no day,
And men forgot their passions in the dread
Of this their desolation . . .

The poem goes on to great detail describing global devastation, including forest fires, famine, and widespread death resulting from this darkness, ending with these lines:

The winds were wither'd in the stagnant air,
And the clouds perish'd; Darkness had no need
Of aid from them—She was the Universe.
Click to expand...

I found this pic "Two Men by the Sea," by Caspar David Friedrich of the European sky in 1817. 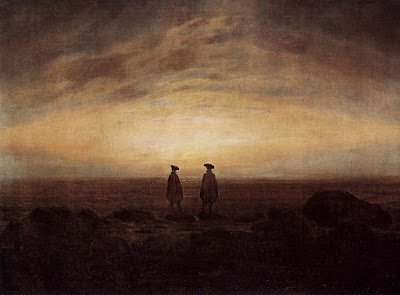 Joe said:
So the question is: does saying "if you don't take a vaccine you will die" 5 times in the first 10 mins of a YT show, constitute the kind of 'medical misinformation' YT is looking for and get your video deleted by YT. We shall see!

It doesn't seem to be misinformation because they write it on official leaflets. Here is an example from Nuremberg. This is an official flyer that can be downloaded from the city portal. Vaccination apparently protects against death. Maybe we should take it after all and then become immortal....

Geez! I don’t know should I laugh or scream in terror; every single line above is lie and / or misleading.

'Back to Geopolitics as Normal? Russia-US Clash Over Ukraine is Test of European Loyalties'

Moderator
FOTCM Member
There are technical difficulties for live streaming, but the show is recording as normal and will be viewable later.

Administrator
Moderator
FOTCM Member
Sorry for the interrupted show today. We had technical issues following a strange power surge here in the early morning, which blew fuses in many appliances, including one discovered only after the show began - in one of the studio's internet switches. So... stand by while I recover as much as I can of the recording, then upload it for viewing/listening.

That's interesting about the power surge and blown fuses. All day yesterday I felt as if I was about to blow a fuse with this entire Russia vs. USA thing going on. I feel so much anger at the forces behind all of this. Had a night full of bizarre dreams and woke up feeling sick. I'm looking forward to watching this show and hopefully calming down a bit. Just feels like another level of oppressive energy is being layered on top of everything else. Trying to enjoy the show but the popcorn is starting to get stuck in my throat.

Administrator
Moderator
FOTCM Member
Here's the main topic from yesterday's show (the build-up to war in Ukraine). Another, shorter video on The Covid will follow shortly. 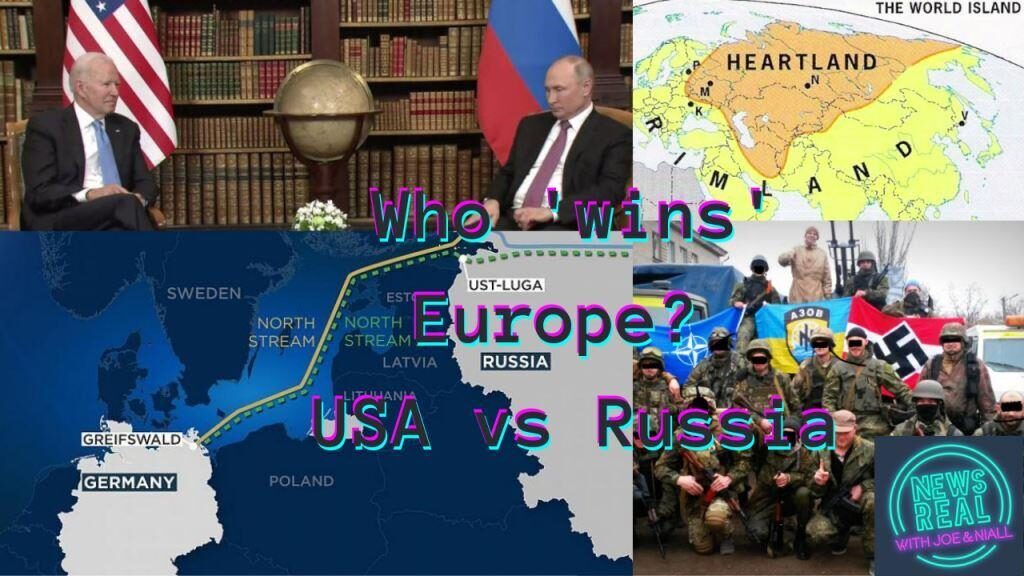 ** This video is a reupload following technical difficulties during the livestream! ** In this week's NewsReal, Joe and Niall discuss the almighty tensions building between the US and Russia over Ukraine, explaining that the key to understanding...