Dozens of online videos document an unusual behavior among tufted titmice and their closest bird kin. A bird will land on an unsuspecting mammal and, cautiously and stealthily, pluck out some of its hair.

A new paper in the journal Ecology documents this phenomenon, which the authors call "kleptotrichy," from the Greek roots for "theft" and "hair." The authors found only a few descriptions of the behavior in the scientific literature but came up with dozens more examples in online videos posted by birders and other bird enthusiasts. In almost all the videorecorded cases, the thief is a titmouse plucking hair from a cat, dog, human, raccoon or, in one case, porcupine.

Many species of titmice, chickadees and tits—all members of the family Paridae – are known to use hair or fur to line their nests, said Mark Hauber, a professor of evolution, ecology and behavior at the University of Illinois Urbana-Champaign who led the write-up with postdoctoral researcher Henry Pollock. The hair's role in the nest is still debated, although it is more commonly used by birds nesting in temperate climates, so maintaining warmth in the nest is thought to be one advantage.
Click to expand...

It may be that the birds simply need the hair to insulate their nests, but the presence of mammal hair—and the associated odor of the mammal—could also deter nest predators like snakes or other birds, the researchers said.
Click to expand... 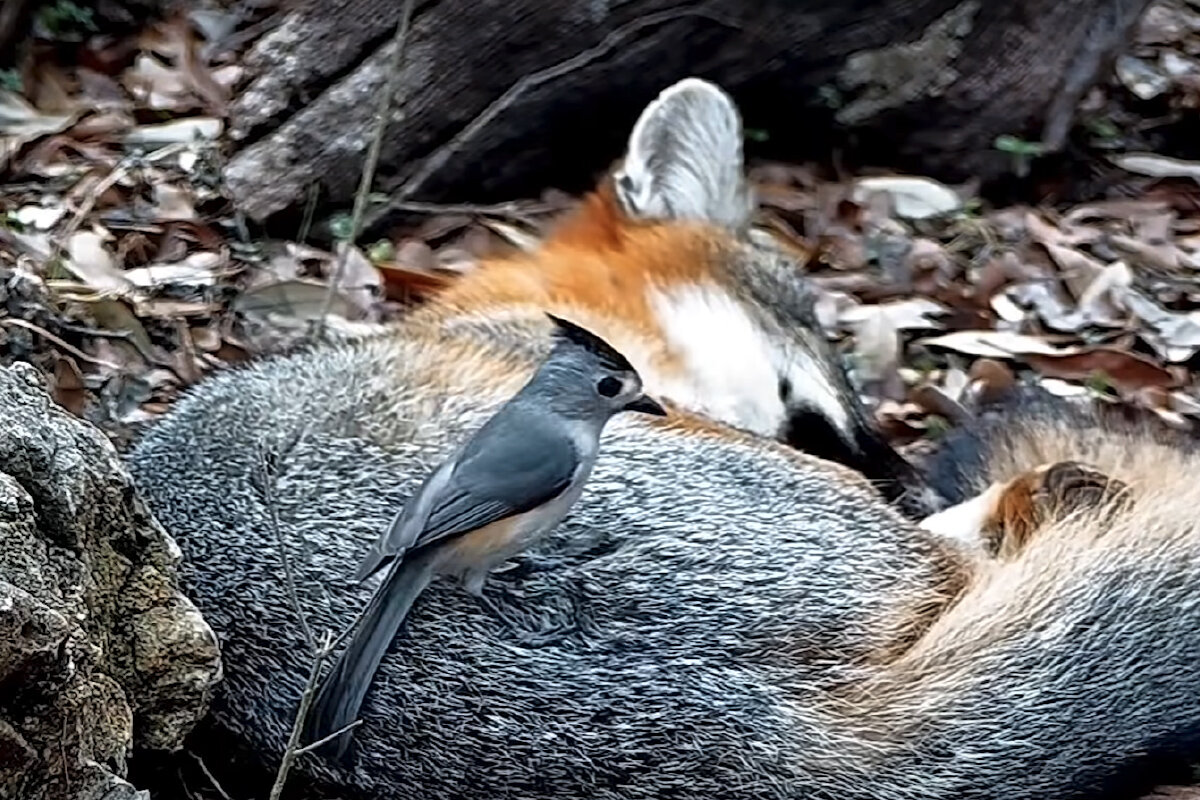 Dozens of online videos document an unusual behavior among tufted titmice and their closest bird kin. A bird will land on an unsuspecting mammal and, cautiously and stealthily, pluck out some of its hair.

Two videos videos in the article

IS THERE HEALING POWER IN A CAT’S PURR?​

Cat expert Professor Leslie A. Lyons, Ph.D., explains “that most cat species produce a ‘purr-like’ vocalization which people generally view as a form of communication or as an expression of pleasure
...
She explained, “For the purr to exist in different cat species over time, geographical isolation etc. there would likely have to be something very important (survival mechanism) about the purr. There also would have to be a very good reason for energy expenditure (in this case creation of the purr), when one is physically stressed or ill. The vibration of the cat’s diaphragm, which with the larynx, creates the purr, requires energy. If an animal is injured they would not use this energy unless it was beneficial to their survival. If purring is a healing mechanism, it may just help them to recover faster, and perhaps could even save their life.”
...
Recent “research on frequencies that promote bone growth, fracture healing, pain relief ad relief of breathlessness and inflammation, show that frequencies between 20 Hertz and 150 Hertz are healing frequencies. All cat species have purr frequencies between 20 Hertz and 150 Hertz with the exception of the cheetah.” The cheetah purrs at 25, 50, 100, 125 and 150 Hertz. “This corresponds exactly with the best healing frequencies.”

Lyons notes that the purring of a cat lowers stress — petting a purring cat has a calming effect. It decreases the symptoms of dyspnoea (difficulty in breathing) in cats and humans. It also lowers blood pressure and reduces the risk of heart disease. Cat owners have 40% less risk of having a heart attack.

Is There Healing Power in a Cat's Purr? | Orthopedics This Week

Is There Healing Power in a Cat's Purr?

sorry, I'm not able to drop pictures into the post -

That´s how I might react too the day I realize how the plandemic was just a bad dream playing out in the best interest of our souls.

FOTCM Member
I think I will try to do that with my Arthuro. He is not a German Shepherd but simply a little Jack Russell but who knows? with paciente and a lot of little dog candies...