FOTCM Member
A news story I read about tomorrow's planned power blackouts in California said that it might be several days before power is restored in many areas, because affected power transmission lines will have to be inspected before they're re-energized again. There will be hell to pay if PG&E et al stick to that protocol. 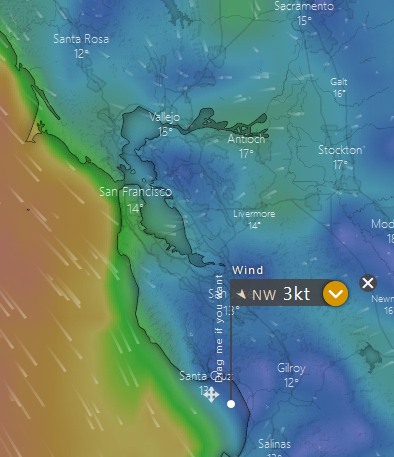 FOTCM Member
The latest as the apocalyptic wind predictions fail to materialize. Chaos, confusion, anger, and frustration rain in the golden state.

"It's a little ridiculous. It's beautiful out... short sleeves... I don't know what prompted the power outages," said Josh Crozat, the general manager of G&C Auto Body He says his office is closed but his garage workers pulled out their hand tools to try and work today. They don't like it but say it's better than not working at all.

"It's exhausting. Normally you hit a button and it goes. Now you're wrenching with your shoulder, your arm. I wouldn't want to do it, I use a pen," Crozat said.

Classes at Sonoma schools were cancelled because of the power outage. Gas stations were closed. People still pulled in to some stations in search of fuel....hoping for an escape.

"I thought I might want to drive to a hotel in a beautiful area that has power, but I don't think so unless I can find some gas," said Glen Delman.

Sonoma Market is open but with limited service. The grocery store has a generator to power its cash registers and lights but its ovens don't work and the coffee is cold. The store is putting its meat and frozen goods in refrigerated trucks behind the store to try and save them. The manager says if the power outage lasts for days, though, they will lose a lot of it to expiration dates.

It's all about timing for the people in Napa, fending for themselves with a PG&E power outage that started for them at midnight, some feeling very lucky that they arrived to the local Nob Hill Market just as a new load of ice was being unloaded.

"I think they jumped the gun in my opinion," said Napa resident Chris Vannoy as he loaded four big bags of ice into his SUV. "There's no breeze. There's still dew on my car. Turning it off is good, but wait till it's dangerous."
Click to expand... 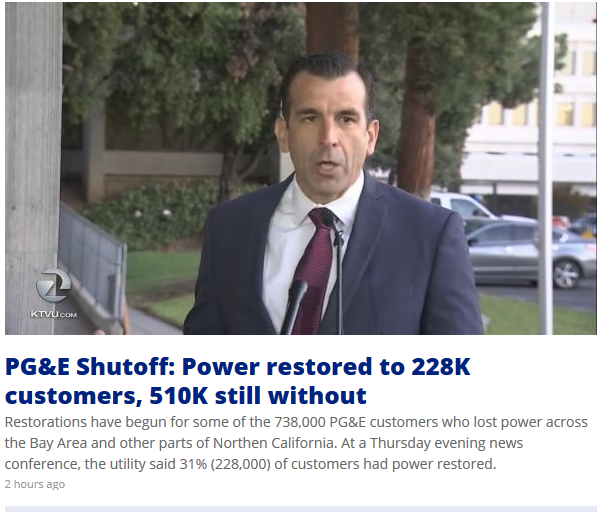 Theses so called events are all smoking mirrors IMHO! With posible intentional fire starts pushing the false narrative with fear.

FOTCM Member
https://twitter.com/i/web/status/1184983688431489024
Hurricane-force winds slammed parts of New England and New York on Thursday, as the bomb cyclone, we first reported on Tuesday, knocks out power to hundreds of thousands of people, destroys critical infrastructure, and delays air travel in parts of the Northeast.

More than half a million customers in Rhode Island, New Hampshire, Connecticut, New York, Maine, and Massachusetts are currently without power in the 11 am est. hour. The majority of the outages are in Massachusetts (224,000) and Maine (219,000), according to poweroutage.us.

Throughout Thursday, winds up to 50 mph are expected for New England, while Boston and New York could see winds up to 40 mph. 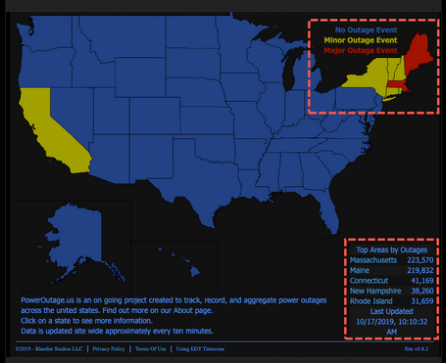 Torrential rains slammed upstate New York, and some areas saw at least 5 inches of rain in hours. For many parts of the Mid-Atlantic and Northeast states, 1 to 3 inches were common.

Data from Flight Aware between 8 am and 12 pm est. Thursday shows 243 delays and seven cancellations, with the bulk of the delays at LaGuardia and Boston Logan International Airports.

Social media users shared their experiences this morning of the bomb cyclone detonating in the Northeast:

Will There Be A Power Outage Exodus?
Oct 26, 2019
As parts of our area brace for possible Public Safety Power Shutoffs because of the fire risk, those outages have an enormous impact on businesses big and small

Yep, that's the way they've doing it for a few years now. Especially in the boonies with lots of trees you have to make sure you don't power a line, cause a short and start a fire.
A lot of the terrain doesn't lend itself very well to easy firefighting: few roads, steep, lots of vegetation.
If there is a wind component, fires travel very fast. In the last couple of years some of the fires in the norther part of the state were so large and ferocious that they were creating their own weather.

Last time we were out for 21 hours, it seems this time it'll probably be at least 32 hours before power comes back on per the current plan for my area.

Update, 6:30 p.m. Tuesday, Oct. 29: PG&E carried out its third preemptive power shutdown in a week Tuesday as the latest in a series of critical fire weather events descended on Northern California.

In a 5:30 p.m. evening briefing, the utility said the blackouts, designed to prevent electrical equipment from sparking wildfires, would eventually affect somewhere between 400,000 and 500,000 households and businesses across 29 counties.

The utility said it managed to narrow the scope of the outages, which began before dawn in far Northern California, from its original estimate of 600,000.

The situation in Marin County was not so straightforward. PG&E initially said late Monday that it would cut power to virtually all customers in the county around 11 p.m. Tuesday. But by Tuesday morning, that estimate had changed — first to 7 a.m., then to 8 a.m.

At 11:30 a.m., however, Laine Hendricks, the county's public information officer, said the new round of blackouts appeared not to have begun and that PG&E was continuing the process of restoring power to customers who had been shut off during the weekend's vast outage.

That weekend outage covered about 120,000 Marin customers — also nearly every home, business and public facility in the county. Hendricks said the utility had reconnected about 53,000 customers by midafternoon Tuesday.
Click to expand...

A man has died, more than 300,000 homes are without electricity, and roads and train lines remain obstructed after heavy snowfall in southeast France.

A major, 20,000 volt cable fell in Tournon-sur-Rhône (Ardèche); while another came down in the commune of Saint-Julien-en-Saint-Alban, over 25 houses; requiring the occupants to be evacuated by firefighters.

Enedis said: “Our teams have been deployed, but the situation is still developing.”

Train company SNCF has also confirmed that trains will be disrupted on several lines to and from Grenoble today, due to heavy snowfall, fallen trees, or trees that appear to be at risk of falling near or on to the tracks.

Airports in the area, including Lyon Saint-Exupéry, also experienced disruption including delays and cancellations.

Airport authority Aéroports de Lyon said it had delayed some flights due to the need to “de-snow” planes and runways, and that the snowfall had been “very heavy and sticky”, but said that the situation was becoming “resolved” by the evening. Passengers were advised to check their flights before travelling.

Orange weather warnings for more snow and ice had been in place the the area throughout the day yesterday, also including the Loire, Rhône, Saône-et-Loire - but all alerts across the country have now been lifted.

A power outage at Oakland International Airport is creating delays Tuesday night during one of the busiest travel days of the year. 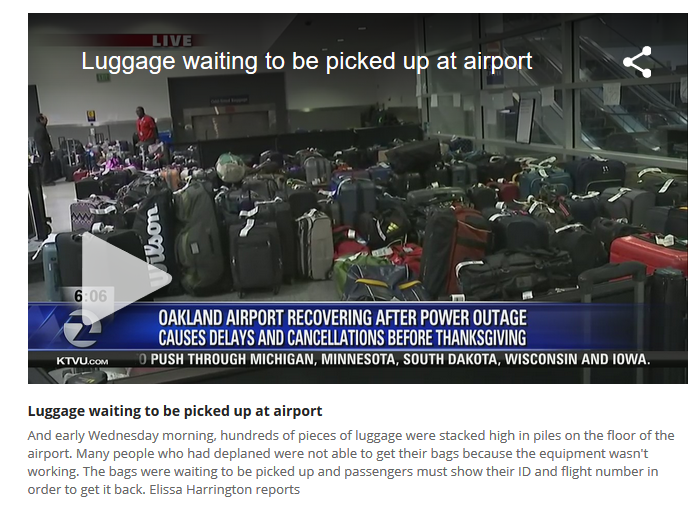 OAKLAND, Calif. - A power outage at Oakland International Airport on Tuesday - two days before Thanksgiving and one of the busiest times of the year - created delays and caused a backup at the security checkpoint before generators kicked in.

And early Wednesday morning, hundreds of pieces of luggage were stacked high in piles on the floor of the airport. Many people who had deplaned were not able to get their bags because the equipment wasn't working. The bags were waiting to be picked up and passengers must show their ID and flight number in order to get it back.

The airport lost power at 6:45 p.m., prompting airport officials to forbid anyone from boarding because the airport was dark, according to airport spokesperson Keonnis Taylor, who added that flight arrivals were not interrupted, only departures. Elevators and escalators stopped moving. TSA agents couldn't screen passengers.
Click to expand... 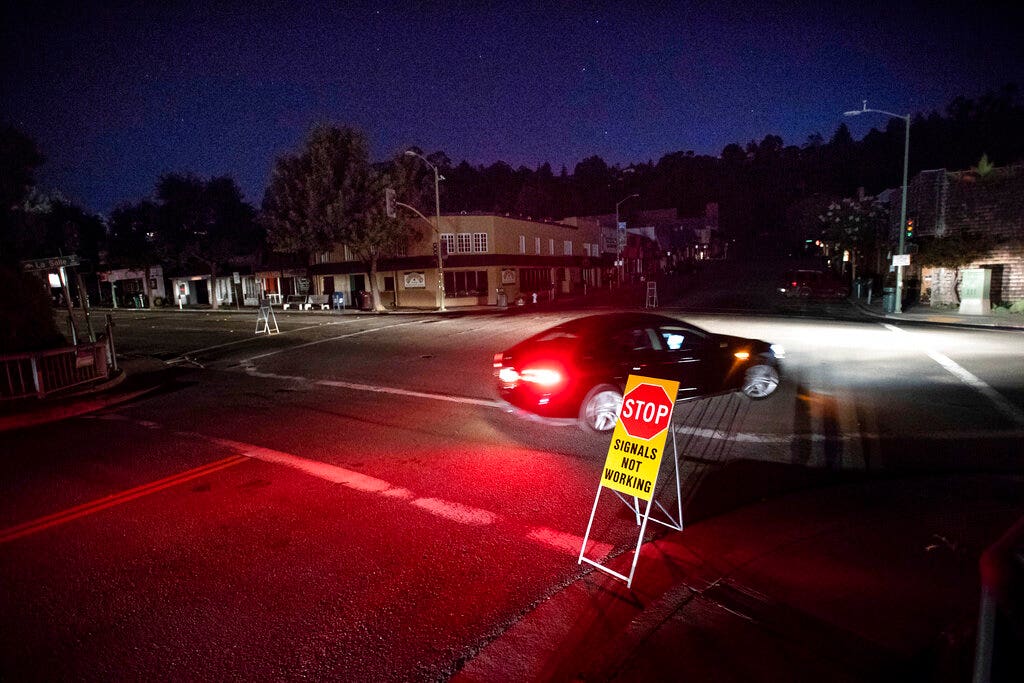 The California Independent System Operator, which manages the power grid, declared an emergency shortly after 6:30 p.m. and directed utilities around the state to slash their power loads by 1,000 megawatts. The resulting outages affected an estimated 750,000 homes.

Pacific Gas & Electric, the state's largest utility, tweeted that it would turn off power to about 220,000 customers in rotating outages for about an hour at a time. Other utilities were told to do the same.

“Unfortunately, because of the emergency nature of this, we weren’t able to notify customers in advance,” Jeff Smith, a company spokesman, said in a telephone interview with Bloomberg.

The outages occurred for 60 to 90 minutes on a rotating basis through the utility’s northern and central California service territory, he said.


A power outage in The Hague impacted tens of thousands of customers on Monday. The outage was first reported at about 11 a.m., and primarily affected the west side of the city, including Duindorp and Scheveningen, but also parts of the city center, energy provider Stedin confirmed.

The outage was also causing problems with the city's tram network. The municipality of The Hague said that the power outage was also affecting city operations. The phone line 14070, to quickly reach city departments, was down, and transactions at City Hall desks were not possible.

It was not immediately clear when the malfunction would be resolved. “The failure was caused by a problem in the main distribution station near the power plant,” the energy provider said.

The problem led to electricity being cut off to parts of The Hague. Technicians were on site working on a solution, the company said shortly after the lights went out.

The company was also facing a high volume of phone calls, making it difficult to discuss the issue with customers, according to a post from Stedin on social media.

Yay poweroutage just when I was typing in the most wonderful code I‘ve ever produced. 2nd time in a few weeks The Hague has a power failure. #stroomstoring #Scheveningen
— Frans Bouma (@FransBouma) August 17, 2020
Click to expand...

This is a significant power outage. Like the total output of 2 average nuke plants: https://en.wikipedia.org/wiki/List_of_nuclear_power_stations

Moderator
FOTCM Member
Yesterday there was a bit more information on Twitter about the blackout in Mexico: apparently it isn't affecting everywhere but it is widespread (there's a map claiming to show regions below), one person is claiming it's the 2nd blackout in 3 days, and another person says it was '“Dia de los Inocentes” in Mexico which is like “April Fools”'':

#CENACEInforma Today, December 28 at 2:28 p.m. (Central Time) there was an imbalance in the National Interconnected System between load and power generation, causing a loss of approximately 7,500 MW