(AP) A maritime expert says a 12-foot Giant Oarfish - the world's largest bony fish - has been found in Swedish waters for the first time in 130 years.

Also known as the "King of Herrings," the dead fish was picked up by a west coast resident who found it floating near the shore over the weekend. It was handed over to The House of the Sea aquarium in the town of Lysekil, where expert Roger Jansson says it's being kept pending a decision on what to do with it.

Maybe the death was related in some way to underground, undersea earth changes - possibly volcanoes?

Moderator
FOTCM Member
There are a couple of other instances of this happening. One in May of this year. And the other in February 2009 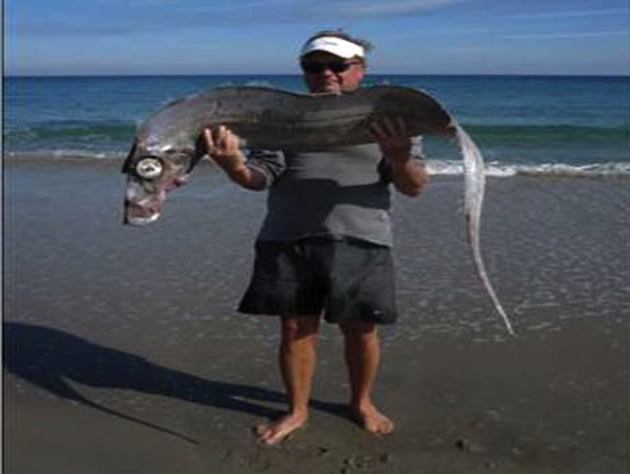 The strange fish discovered by Harry Furrevig and his wife

A Florida couple was out strolling alongside the ocean when they discovered a strange and unidentified sea creature that had washed ashore on Delray Beach.

"It just rolled up on the beach in front of us," Carolyn Hoffman told the Palm Beach Post. "I've never seen anything shaped like that."

The fish in question, long and ribbon shaped, is most likely an oarfish, according to Palm Beach Atlantic University biology professor Ray Waldner. The oarfish is the longest of the bony fishes, commonly reaching 26 feet in length. Others have reported recovering oarfish that are as much as 56 feet in length.

Oarfish live in oceans around the world but are rarely seen in the wild, except when they are dying and swimming near the ocean's surface--or, as with the Hoffmans, when they wash ashore.

They typically live in deeper ocean waters, feeding off of plankton, jelly fish and squid. In July 2008, scientists captured video of a live oarfish. That footage recorded what experts believe had been the first confirmed sighting of a living, healthy oarfish swimming in the ocean.

Historically, the oarfish have been labeled as "sea serpents." S some historians speculate that they may be behind some of the early myths about monsters roaming the seas.

The much smaller fish found by Carolyn Hoffman and her husband Harry Furrevig is not a perfect match. But Waldner said its body most likely was beaten down by the surf.

Furrevig, a fisherman, took a photo with the fish and reportedly told his wife, "Let's fillet this and eat it." "I said no thanks," Hoffman said.
Click to expand...

Video of live oarfish at -
http://news.yahoo.com/blogs/sideshow/strange-fish-found-florida-beach-likely-oarfish-190342643.html

In Florida, scientists have their hands on a large and mysterious eyeball, which washed ashore Wednesday, and are trying to determine what kind of sea creature it belonged to. That could take a few days.

But in Cabo San Lucas, Mexico, another bizarre find was made Friday: that of an oarfish, which washed ashore on bustling Medano Beach, which features a view of the end of the Baja California peninsula.

Oarfish are deep-water denizens that are rarely seen. But because of their long, slender appearance, and their bright-orange dorsal fins and manes, they helped spawn myths of sea serpents and sea monsters among ancient mariners.

They've been known to reach lengths of 30-plus feet.

Pisces Sportfishing reports that an employee from Pisces Real Estate helped discover an estimated 15-foot specimen that washed up in the gentle breakers.

Gonzalez "was working very hard, sitting under an umbrella on the main beach of Cabo-El Medano at an open house we are hosting today at Hacienda," states the Pisces blog. "He was right in front of Villa 2 when he saw a commotion on the beach and a small crowd gathered at the water's edge. His first thought was, 'There's been an accident.'

Unsuccessful attempts were made to revive the oarfish and return it to the Sea of Cortez, and ultimately it was collected for scientific study.

Oarfish inhabit the world's oceans but are found in the dark depths between about 600 and 3,000 feet. On the rare occasions one is seen on or near a beach--this happens very rarely and sporadically--it's either sick or injured, dying or already dead.

Their silver bodies have no scales and the fish swim with undulating motions, serpent-like.

Tracy Ehrenberg, who runs Pisces Sportfishing, said this is the first known oarfish to have washed up on Cabo's main beach. She discussed the discovery Friday morning on the "Baja Now" Internet radio show with Phil Friedman.
Click to expand...

Maybe yet another indication of something unusual happening deep down under the ocean?

FOTCM Member
Another deep sea living Oarfish found dead on a beach this time in Western Australia. Considering how rarely these things are seen and the recent spate of records of dead individuals, it all seems to again indicate some serious underwater volcanic activity/venting.

It looks like some kind of monster from the deep - and it's washed up on a beach right here in WA.
A giant oarfish is an incredibly rare sight, and this morning, it had both locals and tourists fascinated.
Click to expand...

FOTCM Member
Interesting? that is the second oarfish seen in Baja Califonia Sur, Mexico within the month, and in both cases, more inland -so to speak-