A: Cassiopaea. [Advice to Terry and Jan about upcoming Christmas trip]

Q: (L) Ok, and I have been doing a tape a day, I have been an extremely good girl. I just wanted to point that out to you guys. (T) Send Santa! (L) Yes! Send Santa! (J) Well, Santa already came! (L) Oh, I know, but we want millions of dollars here!

A: But, patience pays, yes?

Q: (L) Along the lines of some of the things that I have been working on recently, I'd like to ask if there's any more information you can give to us about the hypnotic-opener- strobe effect, and what it is preventing us from seeing. Is this one of the things that keeps us from expanding into the next density, in terms of awareness?

A: Not related to that. You see, the souls that are affected by all these "cloaking" techniques are vibrating on a low level anyway. The point is to block those who are blockable.

A: You are not blockable.

Q: (T) We are not being blocked. We're beyond the blocking.

A: If you were, would you be doing this?

A: Not necessarily true.

Q: (L) OK, what is not necessarily true? Why don't we see them any more?

A: Don't does not equal won't. If a Buick does not go by, you don't see that, either! And if you are inside, doing the laundry when Mr. Jones decides to take the old "Electra" for a spin, you do not see him, or his precious car, do you?

A: It is not up to you whether you want to see them or not. If they want you to see them, you will!

Q: (T) They will and we will... yes, but, there's a blocking technique being used on people to lower the vibrational frequency to prevent them from seeing them, right?

A: The blocking technique is for many things.

Q: (T) So that people do not understand what's going on around them.

Q: (L) Yes, and you know it's there. OK, let me jump over to this other subject of the number 33 and the number 11. Is there anything beyond what was given on 11-11-95, that you could add at this time, about any of the mathematics or the use of these numbers?

A: Prime numbers are the dwellings of the mystics.

Q: (L) What do you mean, "prime numbers are the dwellings of the mystics?"

A: Self-explanatory, if you use the tools given you.

A: Figure of speech. [Planchette spirals several times, vigorously] And how interesting that we have a new "cell" phone company called: "Primeco."

Q: (L) And how does a cell phone company called "Primeco" relate to prime numbers being dwellings of mystics?

A: Not for us to answer. [Word association by group: encryption, cells of monks, prisons, prime number divisible by one or self]

Q: (T) They are all prime numbers, too; seven and eleven. (L) What kinds of documents or writings... or what would be applicable...

A: No, Laura you are trying to focus, or limit the concept, my dear. Think of it, what is the Judaic Christian legend for the creation of a woman?

Q: [Groans] (T) I hate being in kindergarten and not knowing what the subject is. Ok, prime rib. We have a prime rib, so...

A: What happens in a "Primary."

Q: (L) An election. You narrow down the candidates. What happens in a primary?

Q: (L) I know that's not the point! Is what we're saying here, is that we can use these prime numbers to derive something out of something else?

A: We told you about the mystics.

A: Name the primary mystical organizations for key to clue system.

[We named: Catholicism, Christianity, Judaism, Cabalism, Sufism, The Koran, Mysteries. Laura realized that she had just set aside the book "Understanding Mysticism," it was next to a book on Caballa on the bookcase in the room. Jesuits, Masons, Knights Templar, Rosicrucians]

Q: (L) All right. With our little list that we're making, are we on to something, or are we completely off track?

A: Yes, now check out those crop circles photos... any prime number combos there?

A: Composition and dimensions... anything you can find. [Discussion: Sacred geometries, all sects listed use prime numbers. John 3:16-19, Corinthians 13. Genesis, Ch.2, verse 22 "rib taken from the man and made woman" - 2 is the only even prime number. Ch 3, v5..."your eyes shall be opened and ye shall be as the gods." (Eating from the Tree of Knowledge)]

A: All are lines you ought to follow. Now, look at the photos on the wall! [Referring to large photocopy of a number of crop circles we had pinned to the wall.]

A: Count the large spheres in photo three.

Q: (L) And what does that photo represent?

Q: (T) OK, there are seven large circles; a large central one, and then six outer ones that are smaller. Each of the six smaller circles is connected to the larger circle by a shaft, or a line, or a conduit of some kind.

A: Add large and small spheres.

Q: (T) So, that's another prime: nineteen is a prime number. (L) OK, they're prime numbers. And... (T) Are they... just as an offshoot here, do the six circles, the first set surrounding the large circle, are those the sixth density attached to the seventh density?

Q: (T) OK now, and then, outside of that are smaller spheres, each one connected one to the next, in a line. We're looking at prime numbers here. What are we looking at? We've got a central one, six outer: large, six outside of that: smaller, six outside of that: tiny... Could, and I'm just thinking off the top of my head here, nothing cast in concrete, is this a representation of... a sphere, getting smaller and smaller... going that way. Or, coming in, this way. Or that way and this way. Like the infinity mirrors...

Q: (T) Ahhhh, I now see this as a three-dimensional object as opposed to a flat circle.

A: Do that to the others too.

A: You do not have to figure this all out tonight, just some food for thought.

A: Ark may be able to three-dimensionalize by computer program already.

Q: (L) Yes, well, let us get back to this. The crop circles, as I understand, are related to the code or the mystical prime numbers, the mystical dwellings, and that somehow, putting all of these things together, these different pieces of this puzzle, from so many different directions, will enable us to perceive, or learn, or conceive something that will enable us to do something. Is that correct?

Q: (L) Is there anything more that we could look at on this subject tonight, because right now, I just need to think about it. You get so much, and you have to digest it. (J) Food for thought!

A: Well, you have enough to play with for now, so goodbye.

Did anyone followup on this crop circle matter, and '3-dimensionalize' some of the crop circles?

Seems like something that would be much easier to do today with software, than it would be then.

A: Ark may be able to three-dimensionalize by computer program already.
Click to expand...

Did this ever happen?

Tycho said:
Did this ever happen?
Click to expand... 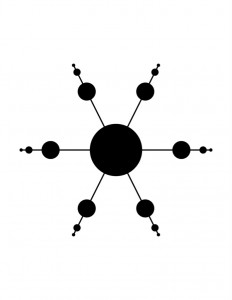 The Wave Chapter 69: The Whirlpool of Charybdis, the Sirens and the Navigator

I know that the very idea of being in an actual Matrix as depicted in the movie is a difficult pill to swallow. We have been taught so many things from so many sources throughout history that tend …
cassiopaea.org

Laura said:
A: Don't does not equal won't. If a Buick does not go by, you don't see that, either! And if you are inside, doing the laundry when Mr. Jones decides to take the old "Electra" for a spin, you do not see him, or his precious car, do you?
Click to expand...

Interesting that they referred to UFOs using an "Electra" as the model in the car analogy. Seems like a connection to electricity, and electrons are particles which have 'spin'.

I happened to re-read this session on the 11/7 (or 7/11 in the US notation). Prime example of synchronicity!