The Symbolism in this happening is giving me a brain cramp!
Nature reflects messages ALL the time, in so many ways.
I've highlighted a few bits of Symbolism I am seeing in this article, for what it's worth.

This picture of the obviously Asian Clinic Assistant holding the adolescent "Bald Eagle" is rather interesting, considering world events at this time! She is NOT featured in the News video in the link...

VICTORIA -- Eight bald eagles are fighting for their lives on Vancouver Island after feasting on an animal carcass that was loaded with sedative drugs.

The first poisoned bird was brought to the Island Animal Hospital by members of the Raptor Rescue Society in Duncan, B.C. on Sunday.

"They actually thought it had died because it was so non-responsive," says Ken Langelier, a veterinarian at the Nanaimo hospital who is renowned for his work with eagles.

"Someone said, 'Don't bother with this one, it's already dead.' But I checked it closely and there still was a heartbeat. Immediately I could tell that it was heavily sedated by the way its third eyelid would move and its slow breathing and heart rate, and low body temperature."

Langelier noticed the bird had a very full stomach and a full crop – a muscular pouch in the throat that's used to store food.

"We managed to empty the crop contents out, start intravenous fluids and give activated charcoal [to empty the stomach] and warm the bird up," he says. "It started to respond and do quite a bit better when I got a call that there were another seven eagles coming in."

The eight ill eagles showed clear signs of having gorged themselves on a dead pig, Langelier says.

"What we're suspecting is somebody had the animal euthanized and rather than bury it deeply or contact the landfill ahead of time, they just disposed of it and of course the eagles are looking for any opportunity to feed on any meat, and started ingesting it and falling from the sky."

The longtime vet and his team spent all day Sunday treating the poisoned birds, while members of the Raptor Rescue Society scoured the area for more birds that may have eaten the poisoned meat and flown away.

"The only ones they found, fortunately, were at the landfill so I think they just ate so much they just dropped on the spot."

Langelier says the remains of the pig carcass have not been found. Volunteers with the rescue society were headed back to the landfill Monday to search for more avian victims and Langelier was headed back to the animal hospital to check on the eagles' progress.

"It's exhausting treating them," he says. "They're just doing what they want to do, which is scavenge."

The veterinarian says barbiturate poisoning is not uncommon among Vancouver Island's eagle population.

He estimates he's treated 50 such birds over the span of his career, including a dozen eagles that fell ill after eating a euthanized farm animal last January, and nearly 30 eagles that gorged themselves on a dead cow in 1988.

"It's important that people realize when a veterinarian euthanizes an animal, it has to be considered as toxic waste," Langelier says.


"The landfill will still take them, but they're buried very deeply so that a bird can't get at them and they do it right away. Unfortunately, they weren’t aware of anything here and so it's not the landfill's fault at all – it's whoever did the dumping."

Charges were eventually laid in the case of the 12 eagles poisoned last year. Seven of those birds died. 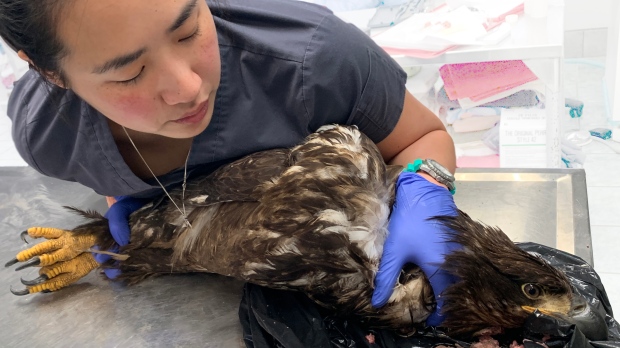 Eight bald eagles are fighting for their lives on Vancouver Island after feasting on an animal carcass that was loaded with sedative drugs.
vancouverisland.ctvnews.ca