The National Museum of Antiquities in Leiden has expanded its collection with a Viking ring. This is a braided silver ring from the tenth century, which was probably worn on a pendant around the neck.

The ring consists of a silver rod with a twisted groove. It is probably a smaller version of the neck rings known from Scandinavia.

The ring was found at the end of last year by someone with a metal detector in a cornfield near Hoogwoud, in the northern part of North Holland. The museum bought the ring from the discoverer.

In the tenth century, North Holland served as a base for Vikings from Scandinavia to plunder cities further inland.

Finds from the tenth and eleventh century are quite rare in the Netherlands. The National Museum of Antiquities is preparing an exhibition about this period. In a few years' time, the ring will be on display there.

Video in Dutch is available (Dutch subtitles only):
Video 3:34 min.

FOTCM Member
I didn't want to open another thread for this bit so I leave it here for the record.
It was nice to see someone posting the following article with a gently sarcastic comment in relation to global warming hoax:
"Do I understand correctly that the climate during Viking era was warmer than today?" 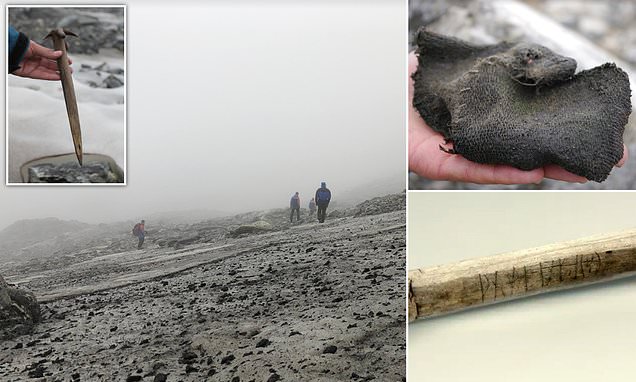 Melting glaciers in Norway have revealed more than 100 artefacts dating as far back as AD 300 one the side of a mountain pass formerly used by travellers and traders.

Melting glaciers in Norway reveal a lost Viking-era mountain pass scattered with perfectly preserved artefacts up to 1,700 years old including knitted mittens, a wooden whisk and a broken walking stick with a runic inscription
April 16, 2020

Melting glaciers in Norway have revealed ancient artefacts dropped by the side of a road more than 1,000 years ago.

Clothes, tools, equipment and animal bone have been found by a team at a lost mountain pass at Lendbreen in Norway’s mountainous region. A haul of more than 100 artefacts at the site includes horseshoes, a wooden whisk, a walking stick, a wooden needle, a mitten and a small iron knife.

The team also found the frozen skull of an unlucky horse used to carry loads that did not make it over the ice.

The objects that were contained in ice reveal that the pass was used in the Iron Age, from around AD 300 until the 14th century.

Activity on the pass peaked around AD 1000 and declined after the black death in the 1300s, due as well to economic and climate factors.

The researchers say the melting of mountain glaciers due to climate change has revealed the historical objects, with many more to come.
This climate-induced retreat of mountain glaciers has caused a new field of science called glacial archaeology.
The resulting findings are a snapshot of high-altitude travel in the Roman Iron Age and the Viking Age.

‘A lost mountain pass melting out of the ice is a dream discovery for us glacial archaeologists,’ said Lars Pilø, first author and co-director for the Glacier Archaeology Program.

‘In such passes, past travellers left behind lots of artefacts, frozen in time by the ice.
‘These incredibly well-preserved artefacts of organic material have great historical value.

‘The decline of the Lendbreen pass was probably caused by a combination of economic changes, climate change and late medieval pandemics, including the Black Death.

‘When the local area recovered, things had changed and the Lendbreen pass was lost to memory.’

Some of the objects are from the means of transportation through the mountain, such as horseshoes, bones from packhorses, remains of sleds and a walking stick with a runic inscription.

....
The article is much longer with many images of interesting artefacts
Click to expand...

Thanks anka for finding and sharing this article here.

It's an appropriate addition to the original post, I think.

In particular, the images on the daily mail site are fascinating. Likewise, the article about the dig itself including the historical climatic details about the surroundings in the Antiquity Journal. Worth the extra time IMO. It's also available for download as a PDF file (left column under Actions).
T

anka said:
"Do I understand correctly that the climate during Viking era was warmer than today?"
Click to expand...

Thank you anka for a very interesting read. It's amazing all the things that are being unearthed on a daily basis it seems.
T

Palinurus said:
Likewise, the article about the dig itself including the historical climatic details about the surroundings in the Antiquity Journal
Click to expand...

Thank you for the link to the above journal. It's very exciting to see so many finds and how they have dated the periods of use on that pass. The finds, in particular the more personal ones, such as the shoe, mitten and tunic really bring the human interactions to life. Makes the imagination soar thinking on these people and their lives.
You must log in or register to reply here.
Share:
Facebook Twitter Reddit Pinterest Tumblr WhatsApp Email Link
Top Bottom