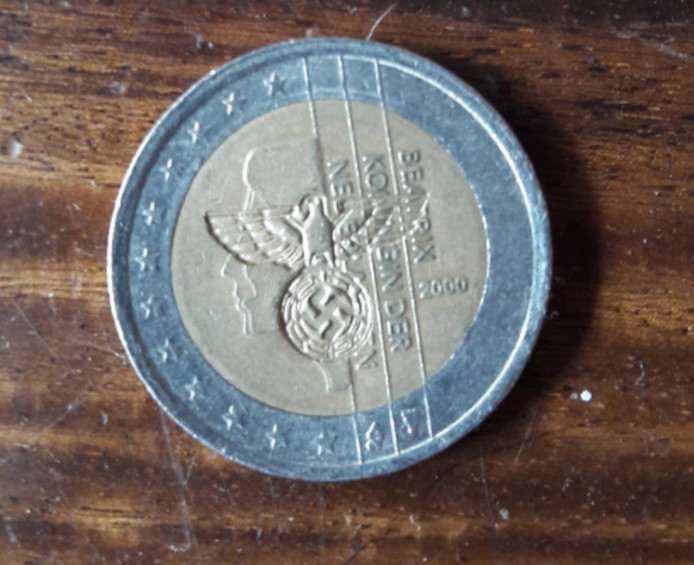 The coin with image of eagle and cross © Photo via whatsapp.


A woman from Asten [Noord Brabant] found a very peculiar coin when she emptied out her purse after her vacation on Wednesday. A 2-euro coin, with the image of [former Queen, now Princess] Beatrix on it, that had also been minted with an image of an eagle with a swastika under it, AD newspaper reports [in Dutch] .

"I collect 2-euro coins. When I saw this coin, I thought what a weird one", the woman said to the newspaper. She doesn't yet know what she will do with it. "I now have around 50 to 75 coins in my collection, for example with castles on it. But with a coin like this you make people angry. It is a nasty thing. I've never seen anything like it."

The woman also cannot say exactly where she got the coin. "I could have gotten it at a supermarket, but we also have several campsites around here. Maybe the coin came from there. I really have no idea."

Whether this is the only such coin in existence, or whether more were minted, is not clear. The Royal Dutch Mint doesn't know about it. "Of course we don't make this coin. There are certain machines that people can use to mint coins themselves, but we are not aware of any previous cases of such minted coins", a spokesperson said to AD.

DeepL Translator said:
Euro coin with eagle and swastika turns up in Noord-Brabant: 'A nasty thing' Privacy settings
This Nazi logo has been stamped into it with a serious device. It will not surprise me if there are more
of this kind of coins show up.
- Apollo (@Apollo93742063) August 14, 2019
Click to expand...