The Next US Election - Let 'The Games Begin'

FOTCM Member
Thank you for that Ruth! I agree with that guy. I like Tulsi Gabbard. Yes, I watched the analysis of her interview on Fox. She obviously didn't want to go negative on Hunter Biden but can we really deduce anything about that for sure? For one thing she's a Democrat. If you worked for a company and you knew the higher ups were up to no good and you were being questioned about it in a public venue, you probably wouldn't be to candid in answering either. Now I realize it's not an exact analogy but the point is we don't know exactly why she didn't want to 'go there.' As far as the charge of her being fake, she's utilizing a strategy, I'm mean, duh. Every person uses strategy to get from where they are to the 'desired future,' to use Peterson's terms.

Now I could be wrong about her, but so far I like what I see. She's poised, articulate, and clearly has 'picked her battle' which is regime change wars. Which is very smart. You can't realistically go after that and the CIA and Israel/ Mossad, and 911 truth and (fill in the blank)
Regime change wars is the best choice because it's so damn obvious, or at least it should be. If it wasn't for mainstream news and the military infected entertainment industry brainwashing the American people into believing that "freedom isn't free" so we need this ridiculously oversized military doing crazy sh*t all across the globe, then it would be obvious to a lot more people.

Being suspicious of people and coming up with stuff to back up those suspicions is fairly easy, but so far I haven't seen anything to change my mind about her.

FOTCM Member
As you might have noticed, Tulsi was among those democrats who voted for the impeachment resolution today. That the whole impeachment circus is a total scam is a no-brainer for anyone with two firing neurons. As I don’t think Tulsi is brain-dead, this can only mean that she’s compromised, bought off or deceptive, or all of the above. And she’s supposed to be someone who advertises being a ‘freedom fighter’ and ‘anti-elite’. The old motto stands: by their fruits shall you know them.

I often wonder, how is it possible that all the democrats you see, and the talking heads on the msm (which is their extension) are such obvious liars. The dishonesty is just oozing out of them as you watch them talk. They are like robots or clones, and I wonder what is the connection they share - have they all been abducted and reprogrammed, or what?

Ambassador
FOTCM Member
One thing I remember is that Tulsi said that ""there's no disputing the fact" that Bashar Al-Assad is a "brutal dictator" who "has used chemical weapons" against his people, but adds that amid the US's "regime-change war," the "lives of the Syrian people have not been improved"." (Feb 20, 2019)

But then she also said: “Asked whether Assad is an enemy of the United States, Gabbard responded, ‘No.’” Gabbard added she did not believe chemical weapons were used in Syria." (Politico, February 6, 2019)

So some things are a bit contradictory... Which I suppose is not unusual with politicians. Some independent journalists, such as Eva Bartlett, are not convinced that she's the 'real deal'. I'm not entirely sure either, though I do appreciate what she said about Killary, that was on point!

Of course, you can't expect anyone to act right on all topics, or to be knowledgeable about them, but I wonder how different her approach would be compared to Trump's if she was the President. I wonder if she'd be able to truly face the war industry people/CIA/Swamp.

aragorn said:
Yes, it now looks as predicted, that Tulsi will run as a third party candidate.
Click to expand...

That's just speculation from outsiders. She's given no indications and has strongly denied interested in running as a 3rd party, probably because she knows she can't win that way and she wants to win. Not running for reelection is probably more about focusing on the campaign for president than anything.

aragorn said:
As you might have noticed, Tulsi was among those democrats who voted for the impeachment resolution today.
Click to expand...

She's been pretty strongly anti-Trump for a while. It shouldn't be surprising, although like you it's disheartening that she would vote that way. She has to defeat Trump to get what she wants, so she really has no choice but to attack his actions/behaviors.

FOTCM Member
So Israel has stepped into the picture formulating a plane to avoid Russian interference which is not surprising.
Oh Wait, there was no Russian Collision. Welcome to ‘Adversaria’: How a fake town and real hackers battle test officials for Election Day 2020

In the fictional American town of “Adversaria," federal and local law enforcement officials battled against hackers who used a deep bag of tricks to disrupt election day. 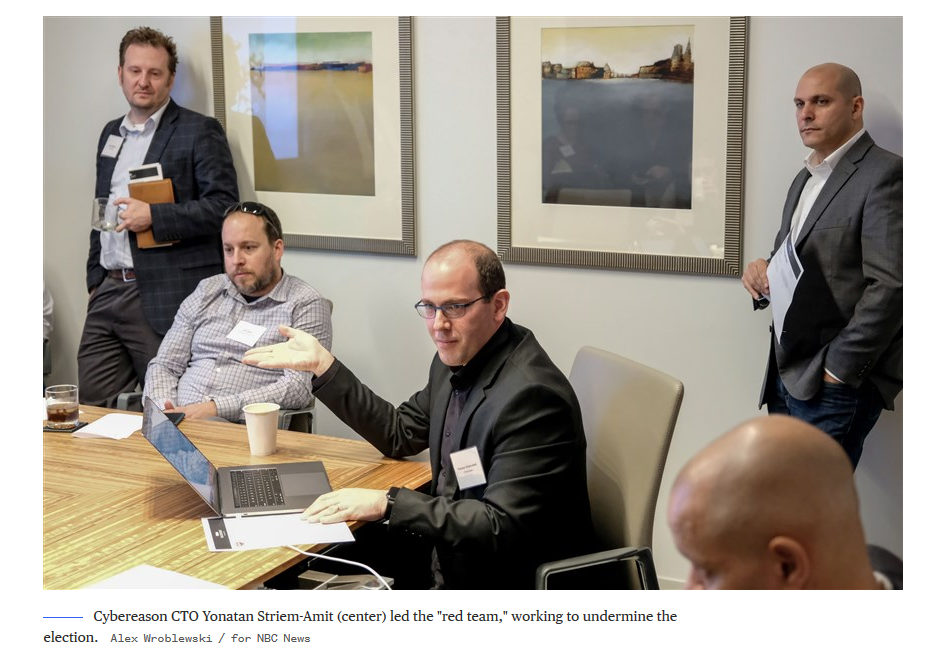 Mid Snip: 5-6 minute Read:
The scenario was fake but the vulnerabilities were real, a scrimmage designed to test the abilities of federal and local law enforcement to work together and respond to a nation-state attack.

After Russians attempted to interfere with the last presidential election, the U.S. government and private sector have worked to shore up communications and cooperation and get ready for 2020.

“Contingency planning and tabletop exercises that help state and local election officials to be more prepared for the unexpected are a good example of how they are ‘upping their game,’" Perez said in an email. “They’re an essential part of protecting public trust in the 2020 elections.” During the gameplay, the “white team” debated the impact of the fictitious attacks and defenses and delivered the results to the teams in their rooms.Alex Wroblewski / for NBC News

And as far Tulsi Gabbard she's a pipe-dream and part of the deep state infrastructure disguised, like Obama in 2009.
Is she a witting agent, or a unwitting CIA plant?

In the context of bad media reporting, Elizabeth Warren plus a New Mexico Congresswoman has been excused from the Covington kids defamation suit, because they work for the Government. Its something called 'sovereign immunity'. Apparently it's possible to defame people when you hold certain positions. He speculates what that could mean for Trump and the media personalities remaining in the suit.

FOTCM Member
Having followed the Tweets about the present impeachment inquiry, I can only say it is mind blowing, absolutely. It is almost so crazy one wonders, if it is a set up, if a number of people were picked to make fools of themselves, because they sure are, so far. Couldn't the Democrats be accused of election meddling in the US 2020 campaign, just look at the odds of Trump winning the election: US Presidential Election 2020 Winner Betting Odds | Politics

FOTCM Member
Yeah, it’s totally crazy how many people see and interpret the behavior off e.g. Schiff and other lying Dems in a completely opposite way of what we, dare I say normal people, see. Just taking a cursory read on Twitter is surreal; “Schiff did a magnificent job”, “Jim Jordan is a disgrace and a liar”, “Nunes should be removed” etc. Some of these are of course paid propagators and “bots”, but I suspect that many are just not able to see - they live in another reality. And thus they are easily manipulated. And, Twitter is of course doing their share in promoting the content that suits the ‘deep state’ narrative.

“I, as I say, never, never, never say never, and I will certainly tell you I’m under enormous pressure from many, many, many people to think about it,” Clinton told BBC Radio 5 Live when asked whether she had ruled out running again. “But as of this moment, sitting here in this studio talking to you, that is absolutely not in my plans.”
Click to expand...

If she does, I think she'll lose harder than before. Meanwhile, this video that's been retweeted many, many, many (

) times has reached 10 million views, and I think that number will continue to rise. On top of that, the hashtag HillaryKillList or something along those lines was in the top 10 LA hashtags on Twitter a couple of months ago. I think more people are realizing what kind of 'person' she is.

I suppose this isn't a surprise for many people. Kamala Harris has dropped out of the 2020 presidential race. There is a delay in this YouTube. Talking starts at the 1.40 mark. It reminds me of that childrens' nursery rhyme "ten green bottles", only perhaps they should be blue, not green?

Knocked down by Tulsi and she never recovered.

FOTCM Member
MSNBC has been blatantly omitting Yang and Gabbard from their graphics that show different polling results like they don't even exist. Yang's finally had enough and is calling them out on it on CNN. The lady who's interviewing him is basically insinuating that he's making a mistake by doing so.

I'm starting to speculate if Joe Biden's popularity as a candidate is because people need more humor in their lives, in these trying times.


Do the Democrats and their supporters understand humor? Perhaps they do, except when it comes to anything Donald Trump does or says in order to troll them. He's been doing a lot of that lately.

FOTCM Member
My source for this is Dan Bongino who covers current events in US politics in his own, detailed fashion. He's passionate about exposing the corruption thats taking place then lays it out for his listeners. He was formerly in the secret service so at times he has an insiders perspective which is interesting. He's good for keeping up to date on whats happening daily with the Washington Circus.

As the Democratic candidates vehemently cry to increase taxes on the wealthist 1% they are busy passing a bill that would give a substantial tax deduction to these same people. Trumps overhaul of the tax code included capping the deduction for State and Local Taxes (SALT) that was applied to Federal taxes to $10,000. This was a serious tax increase for the wealthiest 1 and 2% who could claim $100,000 or more for this tax deduction previously. According to Bongino, the millionaires in New York state and California are pressing the Dems to cut this tax rule. Below is the quote he mentions from a left wing think tank.

More modest proposals to modify the SALT cap offer a superior approach; such proposals can be designed to exempt the vast share of taxpayers from the cap and at far less cost.