Ambassador
FOTCM Member
while on youtube I came across this video yesterday:
_http://www.youtube.com/watch?v=o_-zLdoCaQU&feature=related

it poked my interest because of the very good "Bigfoot Footages".
first I thought that this must be a hoax becouse it is simply to good for a big foot footage.

part of this incredible footage is said to have been recordet while Todd went missing in the Woods while looking for evidence of Bigfoots existence for three days .
a "CALL OUT Search and Rescue " episode was filmed about this accident:
_http://www.youtube.com/watch?v=6RetQRg7J5Y&annotation_id=annotation_150539&src_vid=o_-zLdoCaQU&feature=iv

this is the beginning of the documentary from Todd (and his team?):
_http://www.youtube.com/watch?v=xuwlARjX7_c

he says he started as a sceptic about Big Foot and wanted to disproof it.

We are a growing group of independent researchers working towards definitive proof and protection of the species commonly referred to as Bigfoot.

In 2005 our initial group consisted of a cooperation of 4 people: a biologist from Great Falls, Montana; a Cree Nations elder representing the First Nations People; the skeptic Todd Standing; and a paramedic fire fighter from Calgary, Alberta.

After Todd went public with our work, enthusiasts, scientists, and wilderness experts from around the globe began to collaborate with the Sylvanic team. Now we collaborate with scientists from as far away as China and half a dozen forestry and wildlife officers in Canada and the United States.

Our tremendous success has come about from our enormous collaboration of minds, experiences, knowledge, and wisdom from all walks of life. Primatology meets first nations experiences; anthropology combines with the greatest hunting techniques on the planet. The experiences have been passed down through tens of thousands of years of first nations oral history and tradition with decades of scientific studies.

Our ultimate goal is to ethically introduce civilization to the most man-like primate on the planet.
Click to expand...

I think you have to buy the DVD to see the full footage.
I found that a bit odd but apparently they are trying to protect the species (Big Foot) through a petition before they go puplic with all their data.

Sylvanic Bigfoot Video 5 Expedition. 2 MILLION to the person who finds Sasquatch before we do!
Click to expand...

so they are offering 2 million for the person who finds Sasquatch before them ?!
the question that comes to my mind is ; where does this big chunk of money come from ?

as of now I would say that my impression is that it is the real deal..
what do you think ?

That is some luck he had, or some story, chased by big foot then encountering a grizzly bear, WOW.

"I" remember a History's Mysteries episode from a while back about Bigfoot/Sasquatch & Yeti/Abominable snowman. They were drawing parallels between the legends and various supposed sightings from North America and Tibet. What's interesting is the so called "Pangboche Hand:

The Pangboche Hand is an artifact stolen from a Buddhist monastery in Pangboche, Nepal. Supporters contend that the hand is from a Yeti, a scientifically unrecognized animal purported to live in the Himalayan mountains. Critics argue the artifact is a fraud.

Oil businessman and adventurer Tom Slick first heard accounts of the possible existence of a "Yeti hand" held as a ritual artifact in the monastery at Pangboche during one of his first "Abominable Snowman" treks in 1957. The Slick expeditions were the first to bring photographs of the hand back to the West.

During later Tom Slick-sponsored expeditions in and around the Himalayas, his associates gathered more information on the "Pangboche hand," and an effort to further examine it was planned. In 1959 Peter Byrne, a member of Slick's expedition that year, reportedly stole pieces of the artifact after the monks who owned it refused to allow its removal for study.[1] Byrne claimed to have replaced the stolen bone fragments with human bones, rewrapping the hand to disguise his theft.[1]

Byrne smuggled the bones from Nepal into India, after which actor James Stewart allegedly smuggled the hand out of the country in his luggage.[1] Cryptozoologist Loren Coleman rediscovered this story while writing Tom Slick's biography in the 1980s. Coleman confirmed details of the incidents with written materials in the Slick archives, interviews with Byrne, and correspondence with Stewart. Byrne later confirmed the Pangboche hand story via a letter from Stewart that Byrne published in a general book on Nepalese wildlife.[2]

During the highly-publicized 1960 World Book expedition, which had many goals including gathering intelligence on Chinese rocket launchings, Sir Edmund Hillary and Marlin Perkins took a sidetrip in Nepal to investigate the hand. Hillary was unaware of the possibility that he was looking at a combination of the original material and the human bones placed there by Byrne. Hillary determined the artifact was a hoax.

London University primatologist William Charles Osman Hill conducted a physical examination of the pieces that Byrne supplied. His first findings were that it was hominid, and later in 1960 he decided that the Pangboche fragments were a closer match with a Neanderthal.

In 1991, in conjunction with Coleman's research, it was discovered that the Slick expedition consultant, an American anthropologist by the name of George Agogino, had retained samples of the alleged Yeti hand. The NBC program Unsolved Mysteries obtained samples and determined they were similar to human tissue, but were not human, and could only verify they were "near human." After the broadcast of the program, the entire hand was stolen from the Pangboche monastery, and reportedly disappeared into a private collection via the illegal underground in the sale of antiquities. George Agogino, before his death on September 11, 2000, transferred his important files on the Pangboche Yeti hand to Loren Coleman.[3]
Click to expand...

As for Todd Standing & Sylvanic, 2 million is a whole lot of cash to be throwing around in this economic climate, guess it's a wait and see kinda thing.

Moderator
FOTCM Member
A more recent article about this Pangboche Hand on SOTT; :)

This seminar adds even more food for thought whether such creatures actually exist.

It also compliments the theory of us humans being genetically engineered from an alien source, but I think it fits this category and thread much more.

Up to what extent anything mentioned is true, it's an interesting view nevertheless. I guess a few of the members here might have read of his books as well.

I can not view SOTT can someone copy/paste that article Vulcan posted in here for me?

chaps23 said:
I can not view SOTT can someone copy/paste that article Vulcan posted in here for me?
Click to expand...

The link works for me.

Try this link, which is the source for the article on SOTT. :)

Pashalis, though you posted this a while back, thanks for sharing.

It's very interesting and it does seem legitimate, especially with the search and rescue party video.
The fact that he wants the protection of these animals put into law also points to his legitimacy.

Not sure about the 2 million reward though...maybe they've been collecting donations since - I believe he said they started in - 2006 and that's all the money they collected?
And the reason they offer it is because with all the equipment they still couldn't get enough proof of its existence?
Or is it just a publicity stunt?

I'm just speculating but it's very interesting nevertheless.
A

I agree - Todd Standing's photographs and videos are remarkable documents that are worth a good look. I have spent a few weeks cleaning up one of the stills from his Video4 in photoshop. I removed all the branches and restored all the facial features of the elusive tree-peakers. Many hours, but well worth the effort, don't you think? 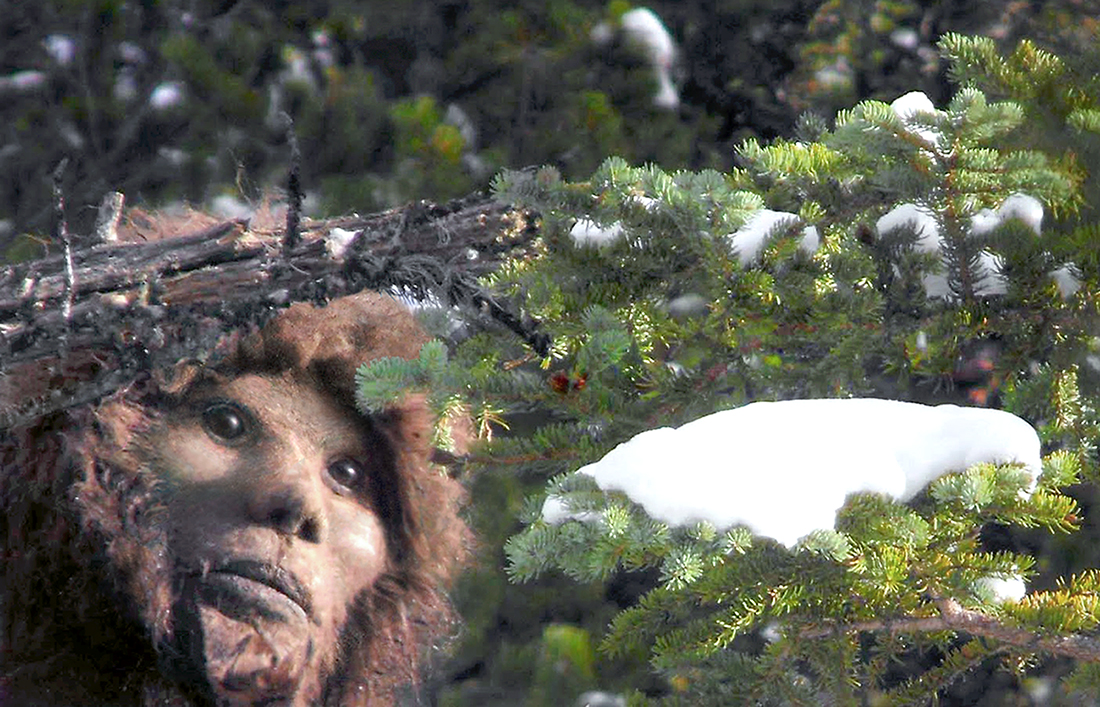 It can be downloaded here:
_http://www.human-resonance.org/sasquatch19.jpg

Here's Standing's original photo that I started with: 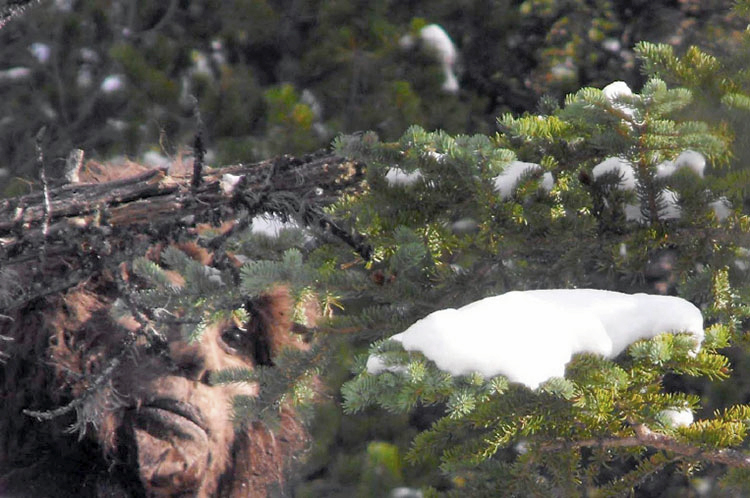 I wrote a long article to go with the image, detailing Native American experiences with the beings and their occupation of ancient Atlantean tunnel systems and cave networks, which can be found here:
_http://www.human-resonance.org/sasquatch.html

Yep, I got the same impression.

Yep, I got the same impression.
Click to expand...

My first impression was "Wookie" WRRRARRRR! ;)
A

Hi Dant, Psha and Anart, your comments emulate the same typical ridicule that is the last gasp response from the control machine before the truth is widely recognized. Thanks for making your robotic responses, as you all have on the vast majority of my previous posts (interested readers should see my previous posts under the username 'eightfold', where I engaged the control system directly, and these same agents were forced to respond to my insights with rudeness).

Your 'puppet' comments repeated ad nauseam remind me of previous COINTELPRO strategies to ridicule reports of extraterrestrial spacecraft in our skies by referring to them as 'flying saucers'.

And now SOTT seems to mostly run stories in their 'High Strangeness' category from obvious COINTELPRO sites like 'WhoForted.com', so named to ridicule all investigation of the paranormal by insulting the reader's intelligence.

Ohhhh, and the Woookie comment is the other tired out machine response - obvious for those of us who know that the Chewbacca character in Star Wars was planted on purpose by the info controllers to ridicule the reality of Sasquatch interacting with extraterrestrial spacecraft, as witnessed by many indigenous trackers and Elders and reported in detail in my article on this subject:

And that's exactly why BIG Media is now floating this stupid TV show called Finding Bigfoot, which finds nothing and mocks anyone who actually has found Sasquatch (ie. the Todd Standing episode). That's also why the trucker hat wearing doofis on that show is called Bobo Fet, as they immediately want you to think of their implanted association with Star Wars and Wookies.

Thanks for your comments, they prove my point very well every time! I look forward to sharing more.

Moderator
FOTCM Member
robotic? agents? If you don't like to be questioned, you can go somewhere else where you can be believed without any question. And for the Cointelpro thing, a false physical evidence is worse than no evidence at all. That's why it is wise to be careful with possibly fake picture/videos. So if you want to stay, watch your language, otherwise, bye bye.
You must log in or register to reply here.
Share:
Facebook Twitter Reddit Pinterest Tumblr WhatsApp Email Link
Top Bottom