Tunguska - an overhead explosion: a new paper by Russian scientists

Ambassador
FOTCM Member
I stumbled upon the following paper that was posted in the Monthly Notices of the Royal Astronomical Society on 4th of February.

Russian scientists postulate that there are no traces of the explosion on the ground, because it was an overhead explosion - a shockwave.

They don't mention it being a comet fragment, and they claim that the body didn't fully disintegrate, but since it was (according to them) "passing-by", part of it managed to return to the near-solar orbit. But they do take into account the bright light phenomena and dust in the upper levels of the atmosphere.

Anyways, here's the quote of the article about it. It also has some diagrams and explanations, unless someone can get an access to the full version of the paper.

For decades experts have been baffled by the shattering detonation which wiped out more than 80 million trees over a remote area of the then tsarist empire.

Explanations have focused on a meteor exploding in the atmosphere, a meteorite striking the surface, or a comet composed mainly of ice, yet apart from the wholesale destruction at ground level in an unpopulated area, there is only minuscule evidence of a space object.

In a major new contribution to the scientific debate, Dr. Sergei Karpov, leading researcher at Kirensky Physics Institute in Krasnoyarsk and his peers, argue ‘that the Tunguska event was caused by an iron asteroid body, which passed through the Earth’s atmosphere and continued to the near-solar orbit’.

The study by the Russian academics published in the Monthly Notices of the Royal Astronomical Society postulates that the destruction on the ground was ‘the result of a passing space body and its shock wave, rather than a direct impact’.

It travelled at a phenomenal 20 kilometres per second speed (12.4 miles per second) before exiting into the outer space shredding about half of its over 3 million tonnes weight on the way.

Calculations showed that the shock wave could be created by a rapid increase of the space body's evaporation as it was approaching the Earth's surface - for a 200-metre (656-feet) meteor that would have been 500,000 tonnes per second.

High-temperature plasma could create effects typical for explosion such as a shock wave.

An issue that has puzzled researchers is the cause of fires in the epicentre.

The new study showed that it could be caused by the high-intensity light of the space body's head as it reached over 10,000 degrees Celsius at its lowest altitude in the Earth's atmosphere.

Calculations showed that the meteor flew over the epicentre for about one second - heating the forest to the extent it lit up.

Scientists used modelling to check their theory and to study how space bodies 'behave' when entering the atmosphere.

'At present, there are over 100 hypotheses about the nature of the Tunguska phenomenon', says Sergei Karpov. 'They include the fall of a small asteroid measuring several dozen metres consisting of typical asteroid materials, either metal or stone, as well as ice.'

However, the researchers argue that the Tunguska space body 'could hardly consist of ice, since the length of the trajectory of such a body in the atmosphere before the complete loss of its mass would be less than the length of its trajectory estimated on the basis of observational data'.

Dr Karpov stated: ’We calculated trajectory characteristics of space from 50 to 200 metres in diameter, and our modelling shows that it could not consist of rock or ice because, on the contrast with iron, such bodies fall apart quick because of colossal aerodynamic pressure in the atmosphere.’

If the Tunguska space object consisted of iron, it could explain why there are no iron droplets at the epicentre: they simply couldn't reach the planet's surface because of the speed of the space body in the atmosphere and its surface temperature exceeding 'several thousands of degrees Celsius.

'This version is supported by the fact that there are no remnants of this body and craters on the surface of the Earth.’

The Event caused shockwaves as far away as Britain and dust from the explosion lit up the night sky in its wake in Europe and even America.

Soviet expeditions to the remote site near the Podkamennaya Tunguska River highlighted a lack of debris or craters on the surface.

Italian scientist Luca Gasperini, from the University of Bologna, claimed shaped Lake Cheko five miles from the epicentre, has filled the crater but his research is strongly disputed by Russian academics.

Dr Karpov said the new theory ‘can explain optical effects associated with a strong dustiness of high layers of the atmosphere over Europe, which caused a bright glow of the night sky’.

The Tunguska Event led to a host of theories on the cause apart from a meteorite, from a massive volcanic eruption, to comet mainly composed of ice not solid space rock, and more.

Local Evanki people believed it was a visitation by an angry god called Ogdy.

'There was a bang in the sky and a mighty crash. The crash was followed by a noise like stones falling from the sky, or of guns firing. The earth trembled,' said a native Siberian some 60 km from the epicentre.

'I became so hot I couldn't bear it, as if my shirt was on fire, said another account from the past.

2. Moscow Institute of Physics and Technology, Institusky Per. 9, Dolgoprudny 141700, Russia

Ambassador
FOTCM Member
Wow so if I understood it correctly, they're saying that whatever struck Tunguska sort of bounced off the planet?

Alejo said:
Wow so if I understood it correctly, they're saying that whatever struck Tunguska sort of bounced off the planet?
Click to expand...

Yes. I have the paper but haven't gone through the details. The siberian times article above does a very good job summarizing the main points.
From this plot (same as in the paper btw): 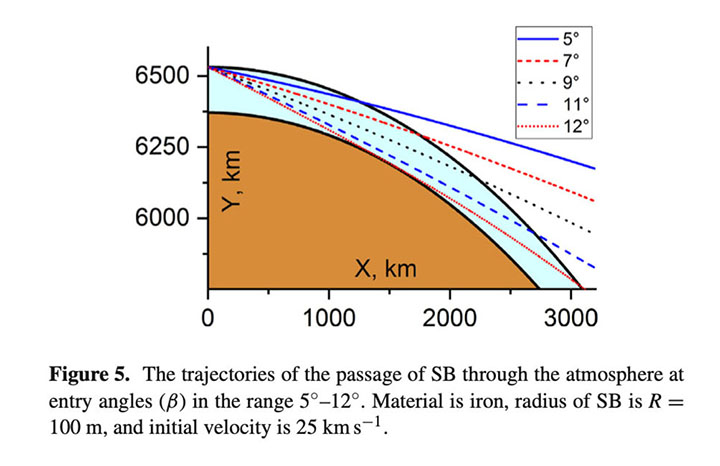 it's more like the object going through the atmosphere and exiting after depositing a part of its mass and energy.
Last edited: May 1, 2020


17.3 Questioner: In meditation a few nights ago I had the impression of a question about a crater in Russia. I believe it was in Tunguska. Can you tell me what caused the crater?


Ra: I am Ra. The destruction of a fission reactor caused this crater.


Ra: I am Ra. This was what you may call a “drone” sent by Confederation which malfunctioned. It was moved to an area where its destruction would not cause infringement upon the will of mind/body/spirit complexes. It was then detonated.


17.5 Questioner: What was its purpose in coming here?


Ra: It was a drone designed to listen to the various signals of your peoples. You were, at that time, beginning work in a more technical sphere. We were interested in determining the extent and the rapidity of your advances. This drone was powered by a simple fission motor or engine as you would call it. It was not that type which you now know, but was very small. However, it has the same destructive effect upon third-density molecular structures. Thus as it malfunctioned we felt it was best to pick a place for its destruction rather than attempt to retrieve it, for the possibility/probability modes of this maneuver looked very, very minute.


17.6 Questioner: Was its danger both blast and radiation?


Ra: I am Ra. There is very little radiation, as you know of it, in this particular type of device. There is radiation which is localized, but the localization is such that it does not drift with the winds as does the emission of your somewhat primitive weapons.


Ra: I am Ra. This is correct. The amount of radiation is very localized. However, the energy which is released is powerful enough to cause difficulties.

Saw this on Reddit today. Sorry for the bad quality screenshot, it ain't mine. The story is interesting, and seems to be coherent to the Ra explanation.

Here's the plain text. Typed out by a Redditor

Some people think that UFOs have appeared in the earth's atmosphere only during the past two decades. This is not the case. The UFO phenomenon has been observed throughout the history of mankind. There are medieval and ancient reports strikingly similar to ours. Among the earlier UFO reports, as an example, may be the well-documented observations of ta "large saucer" in 1882(62?) and a "procession of bolides (exploding meteors)" in 1913. These reports still await investigation.
Click to expand...

The most remarkable "UFO phenomenon" is the famous "Tungusky meteorite." In recent years Soviet scientists have established that the Tungusky explosion had every parameter of an atmospheric nuclear blast.* The USSR Academy of Sciences Reports* (Volume 172, (?). 4 and 5. 1967) include studies by Alexei Leletev which attempts to prove the Tungusky body could not be a meteorite or a comet. In the summer of 1967 the Joint Institute of Nuclear Research at Dubna published a study by Vladimir Kekhedov, who concludes that the Tungusky blast left considerable residual radioactivity.
Click to expand...

Finally, as recently as 1966, after analyzing the sum total observation on the Tungusky body's flight, this writer showed that before the blast the Tungusky body described in the atmosphere a tremendous arc of about 375 miles in extent (in as much), that is, carried out by maneuver. All these new results warrant the conclusion that the Tungusky body sees to have been an artificial flying craft from another planet [REDACTED] Should this be finally confirmed by investigations now in progress, the significant of the Tungusky diameter would be inestimable. But this, incidentally, will pose new problems, If we are indeed being studied by creatures form other planets, what is their purpose? Why are they as studiously avoiding any direct contact? Is the unsociability the result of so high a level of development that they study us from the :height: just as we look upon and study ants? Or is there still the possibly of common understanding are born in the same Universe and obey the same laws of nature? The study of UFOs may lead to quite different conclusions and present mankind with quite different problems. The important thing is for us to discard any preconceived notions about UFOs and to organize in a global scale a calm, (?)-free, and strictly scientific study of this strange phenomenon. The subject and ales of the investigation are so serious that they justify any efforts. It goes without sating that international cooperation is vital. [REDACTED]
Click to expand...

It's not a matter of 'if' it's a matter of 'when' a large asteroid hits earth. NASA is funding the hunt for all the large near-earth asteroids but there are still an unknown number left to find, plus hundreds of sub 1km asteroids. Amazingly there are no funded asteroid surveys in Britain. One man has started his own Astrid hunt and might just have an 'edge' on the NASA-funded programs. Jay Tate of Space Guard in rural Powys is searching for asteroids others might miss. This film tells the story of why NASA funded the Atlas project and how it works. Also, the story of UK o Space Guard run by Jay Tate. Thanks for watching. Please like, share, and leave a comment. If you can support Jay Tate with help or funding get in touch. Simon Holland - Science Filmmaker. Stay tuned for more interesting films.
Click to expand...


Thanks. So, indeed, the number of Asteroids in our solar system might be at least 10 more:

10 Times More Asteroids Than We Thought? Scientists Say So!

We may be closer to Armageddon than you think, folks! A new study claims that there are 10 times more asteroids in the solar system than previously es