MOUNT SODOM, ISRAEL - Israeli researchers say they have discovered the world's longest salt cave near the desert site where, according to the Bible, Lot's wife was turned into a pillar of salt. 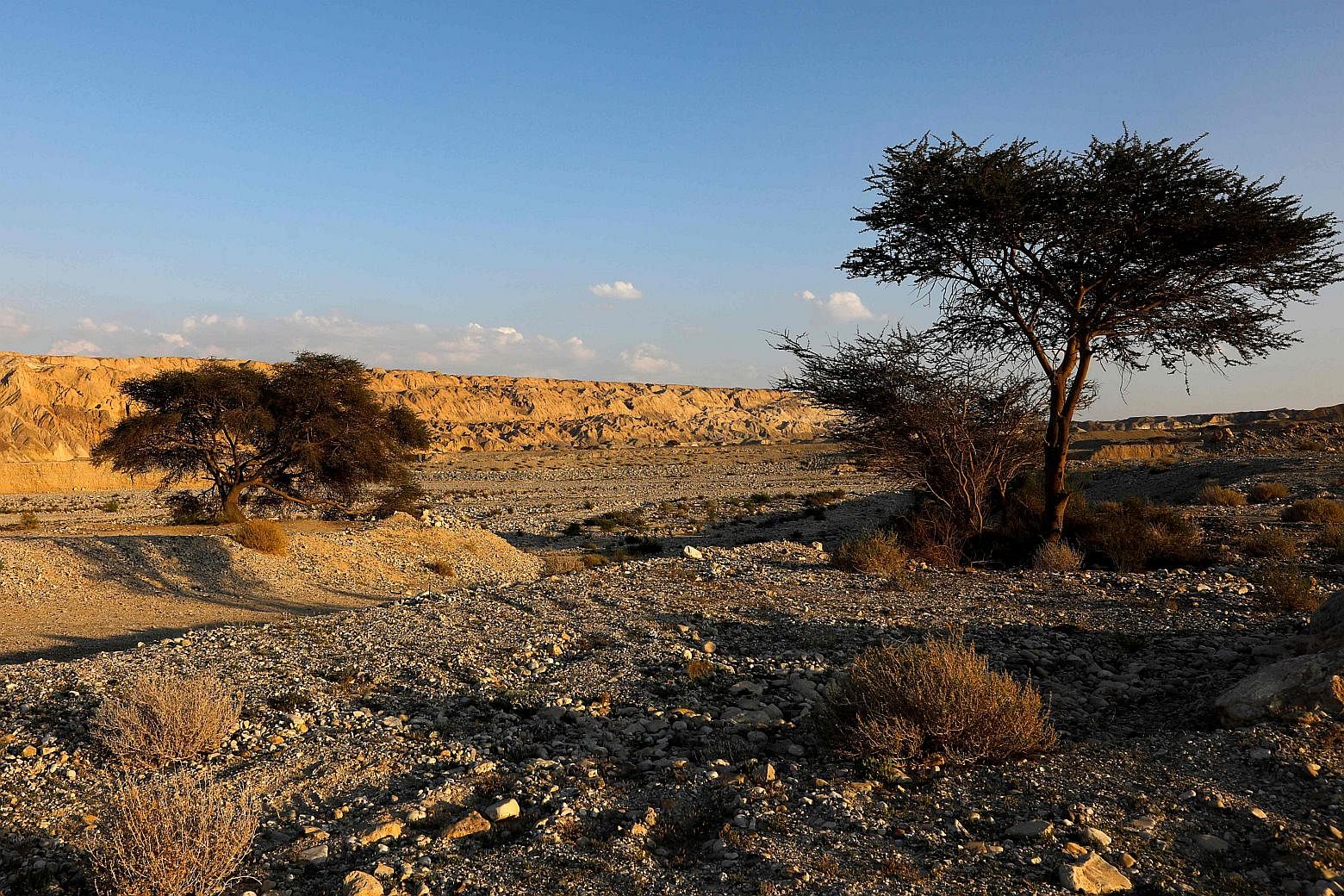 The view outside Malham Cave at Mount Sodom, located at the southern part of the Dead Sea in Israel. PHOTO: AFP

The 10km-long warren of underground passages and chambers in Mount Sodom, overlooking the Dead Sea, was mapped out over two years by cavers from nine countries led by the Hebrew University of Jerusalem.

During one dinner break in the Malham Cave, said the university's Boaz Langford, the explorers felt their pasta lacked seasoning: "So we just broke some salt off one of the rocks and used that."

Malham has taken a 13-year record held by the Cave of the Three Nudes, a 6,850m-long salt cave in Iran, the researchers said.

Sluiced by rain run-off that dissolves its surfaces, Malham will lengthen further over time, they added.

Pale salt stalactites hang from the ceilings, and some of the walls sparkle with salt crystals. Drops of salty water are visible at the tips of some of the stalactites.

Malham became known to researchers through the work of Professor Amos Frumkin, founder and director of Hebrew University's Cave Research Centre, who mapped around 5km of it in the 1980s.

But in 2006, researchers mapped over 6km of the N3 cave in southern Iran's Qeshm island, granting it the widely recognised status of the world's longest salt cave.

Two years ago, Israeli spelunker Yoav Negev decided to complete Prof Frumkin's work, reaching out to Bulgarian cave explorers for reinforcements with the promise of a warm winter adventure.

Mr Negev, founder of the Israel Cave Explorers Club, joined forces with Mr Landford, a researcher at Hebrew University's research centre, to organise a delegation of eight European spelunkers and another 20 locals.

They spent some 10 days mapping the cave in 2018. A second 10-day expedition this year with 80 local and international spelunkers completed the measuring and mapping of the cave with lasers, determining its length at over 10km.

'The most beautiful' - Mount Sodom is essentially a huge salt block covered by a thin but resilient layer of cap rock.

The rare desert rains find their way through cracks in the cap rock and dissolve the salt to form small caves that flow down towards the Dead Sea.

Even in the short period of time since Prof Frumkin's mapping, the cave's structure had changed, and would continue to do so.

Much of the cave's interior is covered by a fine dust that blows in from the desert. Massive slabs of salt, some amber-coloured from dust and minerals, jut out to form dramatic installations.

A thin slab appearing to have been sliced out is nicknamed "The Guillotine", while twin slabs in a different hall earned the title of "The 10 Commandments".

Reporters touring the site clambered and crawled through the narrow passages before reaching the "wedding hall", where hundreds of white stalactites of various shapes and lengths created a festive backdrop.

To Mr Negev, Malham was in "a category of its own". "There's nothing like it in Israel," he said, claiming that no other cave came even close to the 10km mark.

He pointed to its vast network of "caverns, passage-ways, piers, plateaus, one over another", and called it "the most impressive and complex in Israel... and one of the most beautiful and fascinating ones I've been in".

He downplayed the significance of retaking the title from Iran - Israel's main enemy - saying he had "excellent ties" with Iranian spelunkers through social media and professional conferences.

"The political rivalry creates a desire to connect and mutual curiosity," he said. "They're really excellent spelunkers." "I wish I could visit there," he said of Iran and its caves.
Click to expand...