Clowns in the woods

Ambassador
FOTCM Member
At least here in Germany it is also a developing trend since the last weeks and it is even getting more. Some clowns attacked people, some others "just" scared people even with a chain saw. I think the same as mkrnhr that it is not even funny from the beginning. One psychologist wrote, that people may do it to feel superior and I think in our forum context theoretically feed 4d STS.

Another one arrested in the Netherlands last Tuesday: http://www.nltimes.nl/2016/10/20/young-killer-clown-arrested-in-eindhoven-for-sedition

A 15-year-old boy from Eindhoven was arrested on suspicion of sedition through social media. Using the name "Coco the Clown" he called people on Instagram to gather at a shopping center in Woensel, NU.nl reports (in Dutch). This led to fights and small riots involving dozens of young people every night since Friday. The police had to intervene several times after young people started throwing eggs and fireworks. The teen was arrested on Tuesday and was still in custody on Wednesday afternoon. There were no problems in the neighborhood on Tuesday. Five people were arrested in addition to "Coco the Clown". They caused disturbances and refused to identify themselves, according to the police. More arrests may follow. The Coco the Clown Instagram account shows a photo of a so-called killer clown. This is an American phenomenon that recently started popping up in the Netherlands. People dressed as scary clowns walk the streets and scare passersby.
Click to expand...

bjorn said:
[quote author= Persej]I guess people started to cool down on the zombie hysteria and now they switched to clowns?
Click to expand...

To me it seems that people always like to get addicted to some hysterical big thing everyone is talking about. Makes them feel that they are part of something big. Being hysterical is being trendy in a way.
[/quote]

Yeah, like that Pokemon frenzy recently. My cousin was also involved in one zombie performance and she doesn't even watch a zombie movies. Things like that really become viral in some sense.

Some 4th density entities do feed off of fear. This clown trend would be a cheap and easy way for them to get a meal. Also, it would discount genuine window faller phenomena because people would dismiss the sightings as being just some guy in a suit.

A juvenile from Butler County told state police he was attacked in the woods by a person wearing a clown mask Saturday evening.

According to state police, a boy said he was near a wooded hillside beside Hooker Road and Kittaning Pike when he heard a woman scream.

The boy told police someone wearing a clown mask then emerged from the woods with a metal baseball bat, struck the boy in his right knee cap, then ran back into the woods.

The victim was transported to a local hospital to be checked out.

State police ask anyone with information on this incident to contact them.

Last summer, state police issued a “community awareness bulletin” about the possibility of a resurgence of creepy clown sightings because of the release of the movie “It.”

In 2016, there were reports in at least 16 states of people dressed as clowns trying to lure children into the woods.
Click to expand...

FOTCM Member
Bad day to be a creepy clown.....

Police: Little Caesars employee shoots, kills attacker in scary clown mask
http://www.azfamily.com/story/38295937/police-little-caesars-employee-shoots-kills-attacker-in-scary-clown-mask
Posted: May 29, 2018 2:13 PM RDT Video
(Meredith) – A Little Caesars employee in Florida shot and killed a man who attacked him with a wooden post and attempted to stab him with a pair of scissors, police said.

Heriberto Feliciano, 28, had just walked out of the restaurant in Holly Hills at the end of his shift Saturday night when a suspect wearing a scary clown mask approached him, WKMG reported.

Surveillance video shows the suspect walking around the back of the restaurant with a piece of wood.

Soon after, police said the suspect launched his attack and hit Feliciano until the wood post broke.

"As he stepped out of the door, he was immediately attacked by the suspect," Holly Hill Police Chief Stephen Aldrich told WKMG.

Feliciano said he reached for his firearm during the attack and shot the suspect four to five times at close range, according to a police incident report obtained by the Daytona Beach News-Journal. 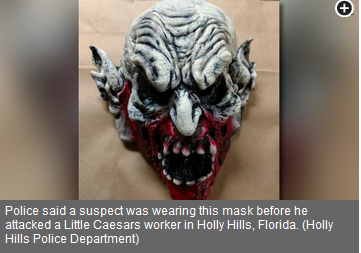 The report states officers found the suspect lying in the restaurant parking lot with a clown mask and scissors on the ground near him.

Feliciano suffered injuries to his face and shoulders and was treated at the hospital.

Aldrich told WKMG at this time, it appears Feliciano’s actions were justified.

“It was an ambush type of an attack and it does appear that he was defending himself,” said Aldrich.

Feliciano has a concealed permit for the gun used in the shooting, the Daytona Beach News-Journal reported.
Police are waiting on the Medical Examiner’s Office to confirm the identification of the suspect.
--
Information from WKMG, The Daytona Beach News-Journal contributed to this story.
Copyright 2018 Meredith Corporation. All rights reserved.
Last edited: May 29, 2018

The Arnhem police spent Sunday afternoon searching the forest at a playground on Engelenburgstraat for a so-called killer clown. The man dressed as a scary clown harassed eight children at the playground earlier in the day. He had knives with him, according to one child. The clown wasn't found, AD reports (in Dutch).

The man hung around the park, near the children for over three hours. "It was a killer clown", 11-year-old Naomi said, according to the newspaper. "In the beginning he just waited, but he kept coming closer and had knives with him. At one point it became scary because there were also many small children. He tried to touch us. When we ran away, he quickly went into the forest." Naomi told her friend's mom, who called the police. According to the girl, this is not the first time she's seen the man at the playground. "He comes back every few months. We now stay away from the forest."

The police told AD that there was a "threatening situation", but there is no question of a sex offense. The police also deny that the killer clown harassed kids at the playground in the past. A police report was filed before, but it does not show any resemblance to the incident on Sunday, a spokesperson said to the newspaper.

The police and fire department searched the forest around Engelenburgstraat and Staverdenstraat for the clown on Sunday, but he wasn't found.
Click to expand...

A 16-year-old girl was hospitalized with a broken arm, broken cheekbones and a concussion on Tuesday evening. She crashed her scooter at Nedereindseplas in Nieuwegein after she was scared by a so-called killer clown. A 24-year-old man was tracked down by the police, but is not being prosecuted. "He says that it was a joke among friends. He wanted to scare them and says that he did not even see the girl", police spokesperson Martin de Wit said to the Telegraaf.

The girl and a friend were heading home from horse riding on a scooter around 9:00 p.m. on Tuesday when a killer clown - a guy in a scary clown mask - suddenly appeared. According to the girl's mother, the clown chased after the girls. They fled and the scooter fell over. The girl hit the ground hard and lost consciousness.

"She fell in fear with her scooter and lay unconscious and badly wounded on the ground", her mother said to the newspaper. Her friend called the emergency services. "My daughter had to go to the hospital. Although she wore a helmet, her arm was broken, her cheekbones broken, she had a concussion and a lot of abrasions. She can hardly remember anything. It is really terrible, also for her friend."

The killer clown was on the road with at least two other young men. They were filmed by a surveillance camera on Muntplein in Nieuwegein. The footage clearly shows one of the young men wearing a scary clown mask.

"This is a very dumb thing to do. According to the boy, it really was a joke among friends and we can't prosecute him for that", police spokesperson De Wit said to the newspaper.

The victim's family will press charges and hire a personal injury lawyer. "I don't think those guys know how much suffering they have caused", the girl's aunt said to the Telegraaf.
Click to expand...

This is not a clown but has a similar effect on the poor witnesses, no doubt:

Now, this might just be prejudice on my part but whenever I see a story like this I cannot help but think that it is an example of postmodernism at play i.e. there is no right or wrong so why not do this?

It’s funny to note that the clown timeline emerged as this creepy thing that twits do with their spare time to people, to a new “clown world” meme. Where people are now making parallel the rainbow aesthetics of clowns to the Pride movement and manic SJWism. *honk honk*
You must log in or register to reply here.
Share:
Facebook Twitter Reddit Pinterest Tumblr WhatsApp Email Link
Top Bottom