Dutch Uyghurs have lodged a formal protest against the Chinese government

Source: Uyghurs in the Netherlands call on Dutch gov to defend their rights - DutchNews.nl 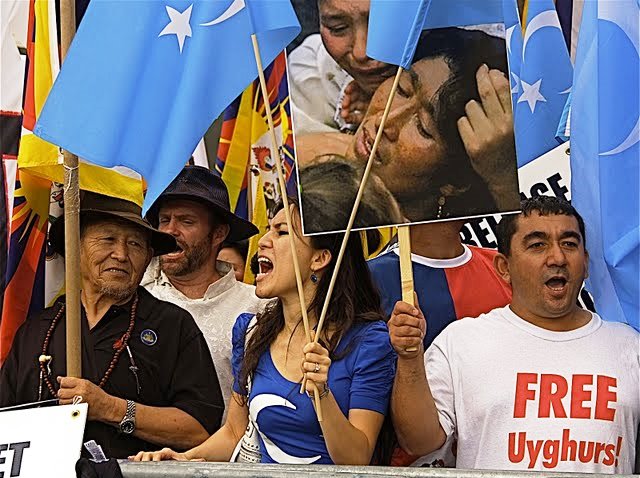 
A group of Dutch Uyghurs have lodged a formal protest against the Chinese government to highlight the plight of their people and Chinese intimidation in the Netherlands, broadcaster NOS reports [in Dutch].

The Uyghurs, some 1,500 of whom are currently living in the Netherlands, are an ethnic minority people concentrated in the Chinese autonomous region of Xinjiang.

Human rights organizations say around one million Uyghurs are currently being detained in camps where they are being tortured and brainwashed [BBC Newsnight YT video, 11:39 min]. The Chinese government describes them as ‘rehabilitation camps’ aimed at rooting out terrorism.

The Netherlands, along with 22 other countries, last month asked the Chinese government stop detaining Uyghurs but more needs to be done, the Uyghurs in the Netherlands said.

The Uyghurs rarely speak out because they fear their relatives in China will suffer the consequences, NOS said. But after a number of Uyghurs in the Netherlands received intimidating phone calls from Chinese officials, they have demanded the [Dutch] government take action.

Esa Sawut, who supports the protest, and who is involved in the ‘Europa East Turkestan educational center’ said he was told by a Chinese official to stop his activities immediately or five of his family members would be arrested.

‘I hope the Netherlands, via diplomatic channels, will talk about the situation to the Chinese government, or at least find out about what has happened to our relatives,’ Sawut told current affairs program Nieuwsuur.
Click to expand...

Human rights organizations say around one million Uyghurs are currently being detained in camps where they are being tortured and brainwashed [BBC Newsnight YT video, 11:39 min].
Click to expand...

Very likely Fake News. As the Chinese government says, they're "‘rehabilitation camps’ aimed at rooting out terrorism". That would make sense, see for example the following interesting information from an article by Joe:

With their fanatical 'pan-Turkic' ideology, the Grey Wolves have, more recently, been put to good CIA use in the farthest reaches of their 'Turkish empire'. In recent years, the Eastern Turkestan Grey Wolf Party has sprung up in China's western province of Xinjiang, supposedly in support of the Turkic-speaking Uyghur ethnic minority, some of whom have apparently been encouraged to embrace 'jihad'. On March 1st, 2014, eight of these Uyghurs hacked 33 people to death at a train station in the southern Chinese city of Kunming. The perpetrators were found with a hand-painted East Turkestan flag and said that they had wanted to go abroad to engage in 'jihad', but with no papers to leave China they decided to go on a domestic killing spree instead.

n July this year the Thai government stopped over 100 Uyghurs on their way to wage glorious 'CIA-had' in Syria (via Turkey), and sent them back to China. The US State Department was very annoyed - so annoyed, in fact, that in August a bomb exploded at a shrine in Bangkok, killing 20 people, mostly ethnic Chinese holiday-makers. The key suspect fled to Turkey. An accomplice to the bomber was arrested and found to be carrying 11 Turkish passports. The bombing is now suspected to have been carried out by the Grey Wolves in retaliation for Thailand's previous deportation of Uyghur terrorist suspects back to China instead of allowing them to travel to Turkey, and then Syria.

On the feel-good, peace-loving humanitarian front, the US government has gone 'all in' to create and financially support (via the NED) the World Uyghur Congress (in 2004), a political (rather than military) tool designed specifically to put pressure on the Chinese government.

But the Kunming and Bangkok attacks are likely to be just a small taste of what is to come. This is why Russia is attempting to strangle the creature in its cradle in Syria. And this is why Russia conducted the largest military exercises seen since the Cold War - 100,000 soldiers across 6,000km of southern Russia - held in September just days before Putin started bombing the hell out of terrorists in Syria, and simulating "an international threat coming from central Asia."

There is substantial evidence of a major US/NATO operation to traffic Chinese Uyghur fighters from Xinjiang to Turkey, and then Syria, and back again to bring 'jihad' to western China. According to Al Mayadeen, a Beirut-based satellite news service, abandoned villages in northern Syria have recently been filling up with the families of Muslim Chinese Uyghurs. These Uyghurs, claims the report, are entering the country, along with their wives and children, to fight alongside Al Nusra Front (formerly known as Al Qaeda) and ISIS/Daesh against the Syrian government. In addition to providing a cadre of battle-trained fighters to ship back to China, the influx of 'Turkic' Uyghurs into northern Syria is very likely an attempt by the Turkish government to populate the area with 'Turks' in advance of potential 'peace talks' on the likely future break-up of Syria.
Click to expand...

Ambassador
FOTCM Member
The same Uyghurs who vandalised the Chinese embassy in The Hague in 2009? And who are well-funded?

In the Netherlands there is a real foundation for Uighurs. In 2014 a handful of demonstrators organized a protest in The Hague and the event was filmed by a rather professional looking UYGHURIA TV. Interesting detail: A number of Uyghur groups are directly funded by the US Department of State through the National Endowment for Democracy (an offshoot of the CIA, so to speak).

In 2009, Uighur and flipping demonstrators pelted the Chinese embassy with stones and eggs and smashed windows in. Apparently the press was already present, but the police were waiting for them.

Last bit of text should be: police took their time responding to the situation.

I stand corrected. I have to confess to not being completely aware of all the ins and outs on this particular subject and fell for the ostensible humanitarian facade. Thank you both for providing the necessary background info.