By 1989, it had become apparent to all — everyone except the CIA, of course — that the Soviet economy, and thus the Soviet state was in very deep trouble.

In November 1989, the Berlin Wall came down in the face of Soviet impotence.

And, with the Cold-War corpse not even cold yet, president George Bush used the newly apparent Soviet weakness as an opportunity to expand US foreign interventionism beyond the limits that had been imposed on it by a competing Soviet Union.

Over the next decade, Bush and his successor Bill Clinton — who very much carried on Bush’s ideals of global interventionism — would place Iraq, Somalia, and Yugoslavia in the crosshairs.

But first on Bush’s list was Panama in December 1989. At the time, the Panamanian state was an authoritarian regime that stayed in power largely due to US support, and functioned as an American puppet state in Central America where Communists were often successful in overthrowing right-wing dictatorships.


The US regime’s man in Panama was Manuel Noriega. But, after he stopped taking orders from Washington, Noriega became the first in a long line of foreign politicians who were held up as the next “Hitler” by the American propaganda machine.

This was done in order to justify what would become an endless policy of invading tiny foreign countries that are no threat to the US — mostly done in the name of “humanitarian” intervention.

Writing in April 1990, Murray Rothbard summed up the situation in Panama:


The U.S. invasion of Panama was the first act of military intervention in the new post-Cold War world — the first act of war since 1945 where the United States has not used Communism or “Marxism-Leninism” as the effective all-purpose alibi. Coming so soon after the end of the Cold War, the invasion was confused and chaotic — a hallmark of Bushian policy in general. Bush’s list of alleged reasons for the invasion were a grab-bag of haphazard and inconsistent arguments — none of which made much sense.​
The positive vaunting was, of course, prominent: what was called, idiotically, the “restoration of democracy” in Panama. When in blazes did Panama ever have a democracy? Certainly not under Noriega’s beloved predecessor and mentor, the U.S.’s Panama Treaty partner, General Omar Torrijos. The alleged victory of the unappetizing Guillermo Endara in the abortive Panamanian election was totally unproven. The “democracy” the U.S. imposed was peculiar, to say the least: swearing in Endara and his “cabinet” in secrecy on a US army base.

It was difficult for our rulers to lay on the Noriega “threat” very heavily: Since Noriega, whatever his other sins, is obviously no Marxist-Leninist, and since the Cold War is over anyway it would have been tricky; even embarrassing, to try to paint Noriega and his tiny country as a grave threat to big, powerful United States. And so the Bush administration laid on the “drug” menace with a trowel, braving the common knowledge that Noriega himself was a longtime CIA creature and employee whose drug trafficking was at the very least condoned by the U.S. for many years.

The administration therefore kept stressing that Noriega was simply a “common criminal” who had been indicted in the US (for actions outside the US — so why not indict every other head of state as well — all of whom have undoubtedly committed crimes galore?) so that the invasion was simply a police action to apprehend an alleged fugitive. But what real police action — that is, police action over a territory over which the government has a virtual monopoly of force —involves total destruction of an entire working-class neighborhood, the murder of hundreds of Panamanian civilians as well as American soldiers, and the destruction of a half-billion dollars of civilian property?

It’s almost darkly comedic how easy it has been to convince the American people to go along with nearly any justification for invading a foreign country, no matter how flimsy. It may be hard for my younger readers to comprehend, but in the late 80s, the American public was so hysterical with fear over street drugs, that it struck many Americans as perfectly reasonable to invade a foreign country, burn down a neighborhood, and send the US Army to lay siege to Panama’s presidential headquarters to catch a single drug kingpin.

After Panama, President Bush moved on to Iraq.

In 1991, Saddam Hussein became the next Hitler, with the media hinting that if left unchecked, Hussein would invade the entire Middle East. “He gassed his own people!” was the endless refrain. The other justification was that Saddam’s government had invaded another country. Rothbard, of course, noted the irony of this “justification”:


But, “he invaded a small country.” Yes, indeed he did. But, are we ungracious for bringing up the undoubted fact that none other than George Bush, not long ago, invaded a very small country: Panama? And to the unanimous huzzahs of the same U.S. media and politicians now denouncing Saddam?​
The Iraq War was an even greater political success than the Panama war. But more importantly, George Bush provided an immeasurably wonderful service to the national security state by making war popular again, after more than a decade of the so-called “Vietnam Syndrome.” As Bush so enthusiastically declared after the end of the Gulf War, “The ghosts of Vietnam have been laid to rest beneath the sands of the Arabian desert.”

Americans, however, would have done well to keep up with a healthy dose of post-Vietnam cynicism. After all, the 1991 Gulf War — a war said to be humanitarian in nature — accomplished little more than to empower Saudi Arabia, a brutal Islamist dictatorship ruled by friends of the Bush family, and which currently wages a blood-soaked war in Yemen against women and children.

But, thanks to Bush’s efforts, war in America was made popular again, and the stage was set for years of follow-up wars waged by Bush successors.

The Clinton Years
By the mid-1990s, Slobodan Milošević was the new Hitler, stepping in to replace Noriega and Hussein as the world’s greatest threats to peace.

The downside of these new Hitlers, of course, was that any reasonable person could see that none of them were any threat whatsoever to the United States.

Even the call for “humanitarian” action rung a little untrue for more astute observers. After all, it struck many people as curious as to why Serbia required bombing for its human rights violations while the genocide in Rwanda — which was occurring right around the same time — was steadfastly ignored by Washington. If human rights were such a major concern for the US state in the 90s, why was there no invasion of North Korea in response to the horrors of the death camps there?

New life was breathed into the military-interventionist camp after 2001 by Osama bin Laden. But “humanitarian” missions and the search for the next Hitler continue to this day.

In 2011, the usual tactics were employed to justify the invasion of Libya — which only made the country a breeding ground for ISIS and Al-Qaeda.

And today, of course, we hear the same things about Bashar Assad in Syria. Like Noriega, Hussein, Milošević, and Qaddafi before him, Assad is obviously no threat to the US or its residents. Indeed, Assad is fighting people who potentially are a threat to US residents. But, since the US military establishment wants Assad gone, some excuse must be manufactured for an invasion.

Ultimately, Rothbard concluded that these methods can be employed against any regime on earth, and wrote sarcastically in 1994: “‘we cannot stand idly by’ while anyone anywhere starves, hits someone over the head, is undemocratic, or commits a Hate Crime”:


We must face the fact that there is not a single country in the world that measures up to the lofty moral and social standards that are the hallmark of the U.S.A.: even Canada is delinquent and deserves a whiff of grape. There is not a single country in the world which, like the U.S., reeks of democracy and “human rights,” and is free of crime and murder and hate thoughts and undemocratic deeds. Very few other countries are as Politically Correct as the U.S., or have the wit to impose a massively statist program in the name of “freedom,” “free trade,” “multiculturalism,” and “expanding democracy.”
And so, since no other countries shape up to U.S. standards in a world of Sole Superpower they must be severely chastised by the U.S. I make a Modest Proposal for the only possible consistent and coherent foreign policy: the U.S. must, very soon, Invade the Entire World! Sanctions are peanuts; we must invade every country in the world, perhaps softening them up beforehand with a wonderful high-tech missile bombing show courtesy of CNN.​
George Bush’s wars would prove to be only an introduction to what was to come during the next 25 years of American foreign policy: target a foreign regime that poses no threat to the US, and manufacture a nice-sounding reason for doing so. Today, the methods are the same, and only the names have changed.
A

Hillary cut short her grieving performance at the Bush Funeral ... so she could "hit the Friendly Skies" and touch down in India - just in time "for Happy Hour and a posh Wedding"! 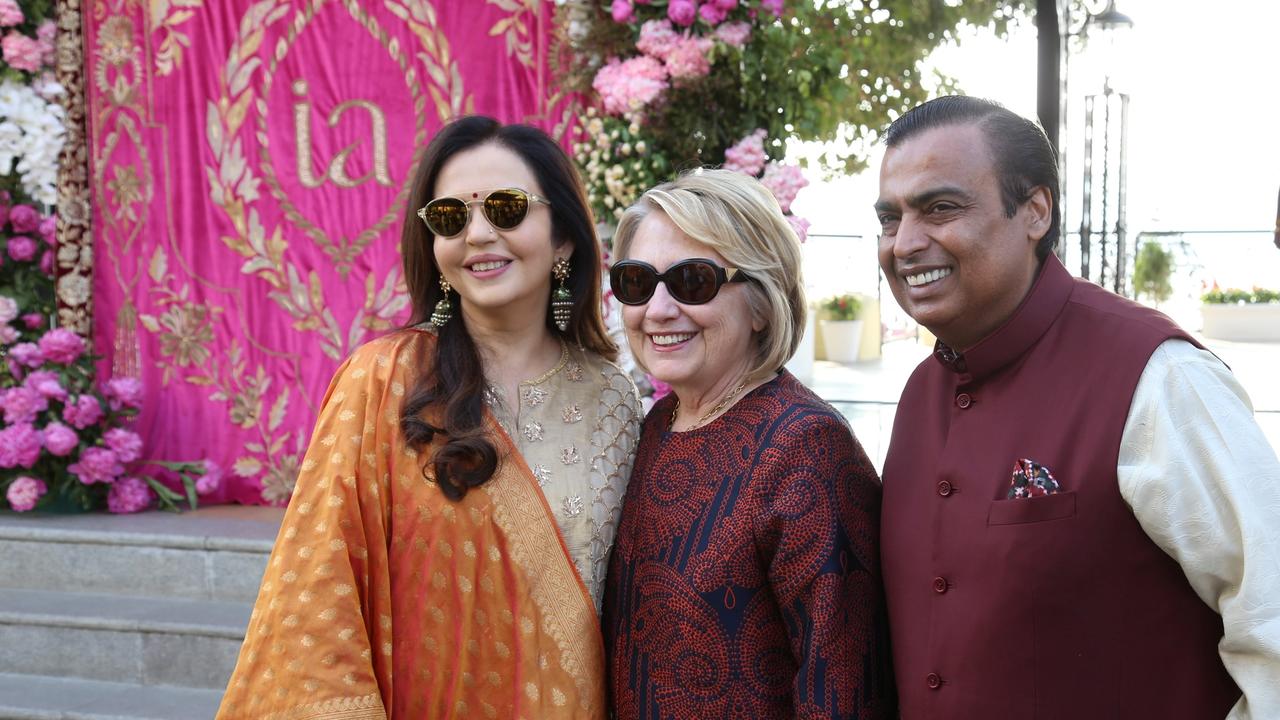 Former U.S. Secretary of State Hillary Clinton poses with Mukesh Ambani, Chairman of Reliance Industries, and his wife Nita Ambani after her arrival in Udaipur to attend pre-wedding celebrations of their daughter Isha Ambani in the desert state of Rajasthan, India, December 8, 2018. Reliance Industries/Handout via REUTERS

Isha Ambani, 27, daughter of Reliance Industries chairman Mukesh Ambani, will marry Anand Piramal, 33, in the financial capital of Mumbai next Wednesday, but the celebrations began this weekend in the desert city of Udaipur, with feasts, singing and dancing, and other pre-wedding rituals.

Security was beefed up as the high-profile guests started arriving at Udaipur’s airport, said a source at the scene, who asked not to be identified. Outside, they were awaited by luxury sedans driven by chauffers wearing white uniforms and colorful Rajasthani turbans.

The Clintons and the Ambanis have an association that goes back more than 18 years and have met several times both in India and abroad, according to Indian media reports.

Then President Bill Clinton held meetings in India with the Ambanis, including deceased founder and Mukesh’s father Dhirubhai Ambani, just before and after he left the presidency in 2000-2001.

In March this year, when Hillary Clinton visited India to deliver a keynote speech at a conference in Mumbai, she dined with the Ambanis at their 27-floor Antilia residence - one of the world’s most expensive homes, according to local media.

Many other top industrialists, politicians, sports and Bollywood stars descended in Udaipur on Saturday to join what has been dubbed locally “the big, fat Indian wedding.”

Guests for the celebrations, which will bring together two of India’s most influential families, have access to an app mapping out the activities, which include a private concert by Beyonce.

Many in India, where millions live in dire poverty, have closely followed the preparations, including the Ivy League-graduate couple’s engagement at the luxury Villa D’Este hotel on Italy’s Lake Como, attended by more than 600 guests, and featuring a private performance by singer John Legend.

She's obviously stressed, and I think she takes a second look at an envelope or picture that some people got at the funeral. The are quite a few videos about the funeral these envelopes and peoples gestures notably Jeb Bush's reaction. Here is one:

FOTCM Member
(Quote:) c.a. said:
https://twitter.com/i/web/status/1069002599121256448
Video
Now the Criminal Investigation Service of the US Navy and the Ministry of the Interior of Bahrain are conducting relevant activities.

US Navy Vice Admiral Scott Stirney is found dead at his residence in Bahrain. He was the commander of the Fifth Fleet - the American grouping of ships operating in the Persian Gulf.

Vice Admiral Scott Stearney was top Navy Brass. This is a long article but presents some very interesting information that might apply to his death?