COINTELPRO is Alive and well. This video talks about the Struggles of the Haitian People. Deep State Black Operation Caught in Act! w/ Ezili Danto (1of2)

Okay. Thank You.
A

FOTCM Member
Protests are being reported in Haiti: 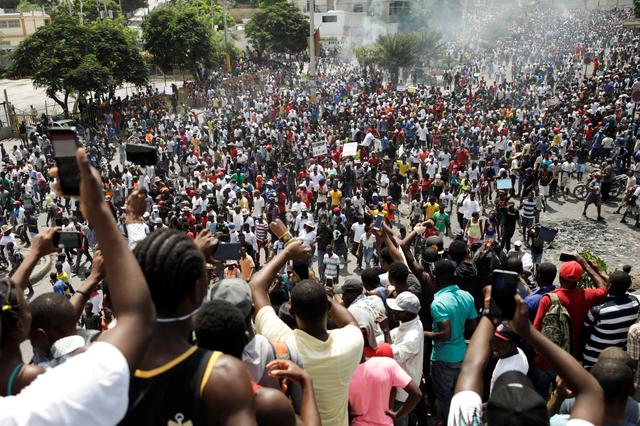 People take pictures with their cell phones as protesters march during a demonstration to demand the resignation of Haitian president Jovenel Moise, in the streets of Port-au-Prince, Haiti October 4, 2019. REUTERS/Andres Martinez Casares

Haitians armed with rocks, bottles and Molotov cocktails clashed with police on Friday as they called on President Jovenel Moise, blamed for a deep economic and political crisis in the troubled Caribbean country, to step down.

The clashes broke out as helmeted police with shields used trucks, water cannon and tear gas to prevent protesters from marching on the headquarters of the U.N. peacekeeping and justice force in Haiti near the Port-au-Prince airport.

Video images showed large crowds and black smoke billowing from burning tires in the streets. Protests were also due to take place in several smaller towns outside the Haitian capital.

Andre Michel, a political opposition leader, told Reuters this week the demonstration had been called to send out a “very strong message” that Moise needs to step down.

Many opposition leaders and disgruntled Haitians have called for Moise’s ouster, blaming him for a failure to address problems including widespread food and fuel shortages, a weakening currency, double-digit inflation and graft accusations made against public officials.

Protests in the most impoverished country in the Americas last week were among the largest and most violent in months. Specialized units of the U.N.-backed Haitian National Police were ransacked and looted, and two police vehicles set on fire, during some of the unrest.

Anti-government demonstrations turned especially violent in February, when the United Nations said 41 people were killed and another 100 injured. Police say at least five people have been killed in clashes in the past few weeks, but Moise has given no indication he intends to resign.

Canadian Foreign Minister Chrystia Freeland this week condemned all forms of violence in Haiti, and the U.N. reiterated earlier calls for calm.

“We continue to encourage all actors to refrain from violence, respect human rights, and allow the normal functioning of hospitals and emergency services, as well as the work of the humanitarians who are assisting the most vulnerable populations,” U.N. spokesman Stéphane Dujarric, said on Thursday.

U.S. Congresswoman Frederica Wilson also weighed in on the crisis, saying Haitians were fed up and Moise should leave office if the protests continue.

“We have a president of a country who the people feel is corrupt,” Wilson said at a meeting with Haitian American activists that was also attended by U.S. House Speaker Nancy Pelosi. “We’ve got to find a solution to stop the protests, or we’ve got to find a way to remove the president.”
Click to expand...

Haitian journalist shot in wrist in latest round of protests 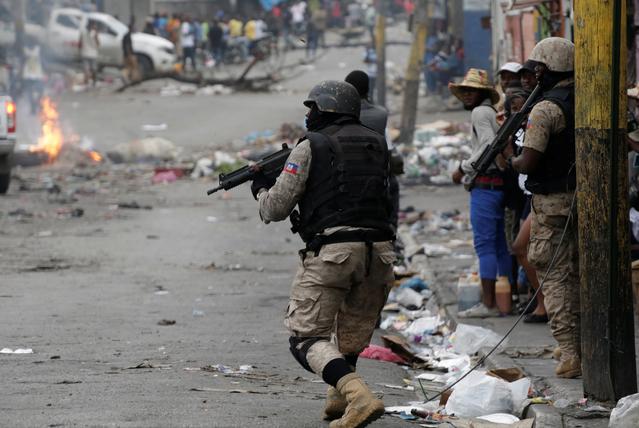 A Haitian National Police (PNH) officer walks across a street in Petion Ville to disperse demonstrators during a protest to demand the resignation of Haitian President Jovenel Moise in Port-au-Prince, Haiti, September 30, 2019. REUTERS/Andres Martinez Casares

A journalist was wounded by gunfire in Haiti on Monday as police fired live ammunition to disperse protesters, his employer, Haitian broadcaster Radio Sans Fin (RSF) said, amid mounting anger over an escalating economic and political crisis.

Protesters also burnt at least a couple of cars, including a police car, in the latest round of civil unrest.

Many Haitians have called for Moise to stand down after what they describe as a failure to address Haiti’s myriad problems.

Four people have been killed in clashes over the past several days.

Protests last week were among the largest and most violent in months as witnesses reported that a special unit of the Haitian National Police was looted and another police vehicle set ablaze.
T

FOTCM Member
Protests continues in Haiti: This Tweet said it has been going on for five weeks:

Greetings PopHistorian....I didn't know how to change the topic to the thread you suggested. That being said, this is another interesting perspective on Haiti.