FOTCM Member
Yes i see now that the event 2 years ago of seeing 3 balls of light had nothing to do with UFO's. But were in fact 99.9 % ball lighting moving through the area. At a time of massive amounts of thunder, lighting activity, within the vicinity.

It was spectacular to wittiness such an event, having never done so before.

They were for all intent glowing white hot, and moving side ways very fast in unison. And very large.

Administrator
Moderator
FOTCM Member
As for what space rocks can and can't do, remember this from the UK in 2014?

This is a video of a lightning strike taken with a super fast camera so that every detail of the movements of the charge can be seen. Now, this is pure charge manifesting plasma. Imagine an object such as a space rock that is supercharged with this same type of energy passing through different charged layers of the atmosphere... it will behave very similarly to these "bits" of electricity.
Click to expand...

There have been lots of these in recent years. Here's one from Brazil in 2014:
Click to expand...

As for what space rocks can and can't do, remember this from the UK in 2014?
Click to expand...

Thanks for the videos, they are a timely reminder of phenomena that we will probably be seeing a lot more of.

As Pierre explained in ECHCC book, "plasma exhibits different modes of discharge depending on the current density (amperes per square meter) that crosses it."

Well, with the observable increase in meteor fireball activity (cometary dust), volcanic eruptions, huge wildfires etc we are currently witnessing, and probable outgassing too; the atmosphere and it's "current density" must be changing significantly, with all this dust and particulate loading - thus affecting the 'charge' of incoming objects.

So the incoming space rocks will manifest differently depending on their size, composition and whatever pocket of charged atmosphere they happen to pass through - be that just streaking through the sky, exploding brightly (arc discharge mode) or traveling slowly, changing direction and doing all sorts of weird 'plasma dancing'. :)

Other indicators of an increased charge on the planet and the atmosphere:

1. The apparent upsurge in lightning strikes and fatalities.

2. The massive tornadoes seen in the US recently, and increase of 'rare' tornadoes elsewhere, like Europe.

3. Explosions are occurring all over the place......car fires, house and factory explosions etc.

Joe said:
As for what space rocks can and can't do, remember this from the UK in 2014?

WOW ,that was really amazing, thanks Joe, i skipped that one.

Was this ball lightning over Fort Lauderdale or something else? May 2016
Published on May 24, 2016

Yes they are electrical phenomena - normally shown on SOTT under the 'Fire in the Sky' section.

Very interesting videos, thanks for sharing.

Laura said:
This is a video of a lightning strike taken with a super fast camera so that every detail of the movements of the charge can be seen. Now, this is pure charge manifesting plasma. Imagine an object such as a space rock that is supercharged with this same type of energy passing through different charged layers of the atmosphere... it will behave very similarly to these "bits" of electricity.
Click to expand...

Interesting, I had been searching/viewing plasma videos, recently saw this one ... the way I see it, if conditions are given, there are a lot of possibilities...

Ambassador
FOTCM Member
From another thread:


Joe said:
Was it similar to the common (these days) pretty large fireballs that last for several seconds?
Click to expand...

I'm currently reading the breathtaking book "Cataclysm" and came across an interesting passage that I think directly relates to the very slow moving fireballs that have been observed and filmed recently (see the videos in this thread):

“Trains of meteors have been observed, however, which possibly support this theory – an especially memorable one occurring on February 9th, 1913, travelling NW-SE at a speed of 6 mps (9.6 kps), some 30 miles (48km) above the ground over a large area of North America165.”
Click to expand...

The slowness of the meteors they sited above took me by surprise. So I checked.

The source they site for this is the following:

So I did a little search for the Great Fireball Procession of 1913 (see Wiki) and came across this video:


According to Wiki the whole event lasted for about 5 Minutes in which individual fireballs were visible for at least 30 to 40 seconds.

And this paper, in which the following is stated:

Though Chant had difficulties in computing the heights of the meteors from the available observations, he decided that they were probably lowest, perhaps 26 miles (42 km) high, in the Toronto-Hamilton area, where the thunderous sounds followed the passage. Timings of the passage of the procession were not so accurate as to allow Chant to easily determine the speed of the bodies, though he noted that an object traveling as a satellite not far above the surface of the earth would have a speed of about 5 miles/second (8 km/sec). Chant thought that the procession bodies had a speed between 5 and 10 miles per second.
Click to expand...

Take a special note how the Procession of the fireballs looked like. Very similar to some of the videos taken in recent years!

Here is a painting of the event: 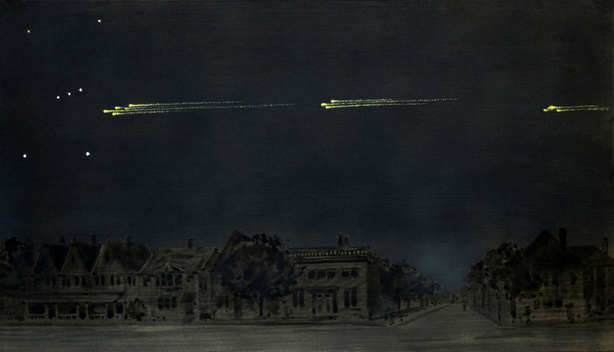 FOTCM Member
In this article they claim there is a class of temporarily captured orbiters, but so far they only found one

Every once in a while, our planet captures a “mini-moon,” a tiny asteroid that hangs out in our orbit for a bit before venturing back into the depths of space. New research suggests these small, temporary natural satellites carry tremendous scientific and commercial opportunities—but the trick...
gizmodo.com
On 1913 Great Meteor Procession - Wikipedia it is mentioned that one astronomer held the view that the 1913 Great Meteor Procession was caused by one such object breaking up and entering the atmosphere, the reference is:
O'Keefe, John A. (1959). "A Probable Natural Satellite: The Meteor Procession of February 9 1913". Journal of the Royal Astronomical Society of Canada. 53: 59. Bibcode:1959JRASC..53...59O.

A similar explanation involving a temporary captured orbiter is mentioned in the following paper from 2018.

Abstract: From an observational standpoint the Chant Meteor Procession of 9 February, 1913 is particularly remarkable, being especially noted for its long ground track of at least 15,000 km, and for the slow motion and near parallel to the horizon paths adopted by the meteors. The circumstances surrounding the Procession are re-considered here in terms of the successive entry of multiple meteoroid clusters. These clusters are in turn considered to be derived from a temporarily captured Earth orbiting object that has undergone disaggregation. It is suggested that the general observational accounts of the Procession can be explained through the sequential entry of multiple meteoroid clusters that moved through the Earth’s atmosphere on grazing-incident trajectories. It is further suggested that the parent object to the Procession, prior to its breakup, may have been no more than 3 to 4-m across.
Click to expand...

And there was another slow one in 2016 which was ascribed to Chinese rocket burning up in the atmosphere, but then one could say such an object would be a temporary orbiter: Mysterious light streaks across SoCal sky, sending social media into frenzy