Of those of us who do take mediumship and channelling seriously, and believe wholeheartedly in the existence of discarnate entities, very few of us are willing to concede that such beings may be liars and manipulators – and not just that, but purposely malevolent. There is, acknowledges the novelist Michael Prescott, “a dark side to the paranormal. It is not all benevolent angels and comforting words from deceased relatives. There can be obsession, deterioration of rational thought, shared fantasy, even a descent into madness. There can be hungry ghosts.” 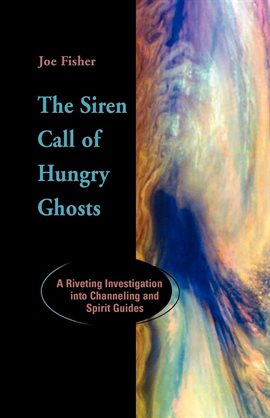 When it comes to encounters with ‘hungry ghosts’, no story is more disturbing and tragic than that of Canadian journalist and best-selling author Joe Fisher. Fisher committed suicide at age 53 on May 9, 2001, throwing himself off a limestone cliff at Elora Gorge, Canada. One newspaper suggested he may have been murdered. Shortly before his death, Fisher’s final book, The Siren Call of Hungry Ghosts, an investigation into channelling and spirit guides – described by its publisher as “his gripping journey into a realm of darkness and deception” – was republished by Paraview Press. What gives this story a strange twist is that, in one of his last communications with his editor-in-chief Patrick Huyghe, Fisher stated that the spirits he had allegedly angered as a result of writing the book were still causing him trouble.
Click to expand...

Available online to be bought or a free copy can be found - I'm sure Joe would just want as many people as possible to read his story, which was absolutely riveting.
R

Recommend Max Gorman’s “Stairway to the Stars: Sufism, Gurdjieff, and the Inner Tradition of Mankind.” Focuses on the before esoteric subjects.
P

The wholesale export of Loosh or something else entirely?
What is loosh?

I first came across the term Loosh a decade ago, after reading one of Robert Monroe’s books Far Journeys. Robert’s explanation for the term goes something like this; I quote loosely from his book.

“Someone, Somewhere (or both, in millions, or uncountable) requires, likes, needs, values, collects, drinks, eats, or uses as a drug a substance a thing we shall call Loosh. This is a rare substance in Somewhere, and those who possess, need Loosh, find it vital for whatever it is used for. Faced with this question of Supply and Demand (a universal law of Somewhere), Someone decided to produce it artificially, so to speak, rather than search for it in its “natural” form. He, she, it, decided to build a Garden and grow Loosh. (Far Journeys, p.162)

From experience, the Collectors have evolved an entire technology with complementary tools for the harvesting of Loosh from the Type 4M [i.e. human] units. The most common have been named love, friendship, family, greed, hate, pain, guilt, disease, pride, ambition, ownership, possession, sacrifice – and on a larger scale, nations, provincialism, wars, famine, religion, machines, freedom, industry, trade, to list just a few. Loosh production is higher than ever before...(Far Journeys, p. 170)

Monroe goes on to tell us that other 'entities' or 'Inspecs (intelligent species)' that he encountered confirmed this loosh-information, but they also added that this 'Someone' was not the beginning of all, he, himself, was created as well. He was only part of a fraction of creation. There would be vaster worlds encompassing the 'world' created by 'Someone'. End quotes. (more detail can be found in the end notes)...

..."Open your eyes and see the obvious."

FOTCM Member
The 4 books of Charles Fort are available as 1 audiobook.

A lot of it is funny listening to it. I'm not sure I'd find it as funny reading it.

If the mean of these extremes is about the distance of present dogmas, we'd like to know by what miracle a true distance so averages two products of wild methods. Our expression is that these developments had their origin in conspiracy and prostitution, if one has a fancy for such accusations
Click to expand...