This is an absurd comedy from my childhood that still amuses me, not so much with its humour overtly, but with the extremity of the artwork. The animation harks back to the golden era of animation, but has an acerbic edge to it that is rooted in the early 90's culture.

FOTCM Member
I watched it too as a kid and a lot of it probably went over my head. I think it was just an edgy cartoon for me at the time, but more tame than some other things. It's weird to watch that clip now, where I understand more of what's going on. The over the top aspect is actually pretty funny.

FOTCM Member
And, then there is this.... The Disturbing Secret Behind An Iconic Cartoon

The Disturbing Secret Behind An Iconic Cartoon: Underage Sexual Abuse
Robyn Byrd and Katie Rice were teenage Ren & Stimpy fans who wanted to make cartoons. They say they were preyed upon by the creator of the show, John Kricfalusi, who admitted to having had a 16-year-old girlfriend when approached by BuzzFeed News.


Robyn Byrd thought her plan was working when the letter from her hero arrived in the mail. It was 1994, and the 13-year-old had sent the creator of The Ren & Stimpy Show a video of herself talking about her drawings and the animation career she envisioned; she thought if she got the attention of the studio behind the hit Nickelodeon show, she might get a job there someday. John Kricfalusi’s effusive letter, Byrd said, seemed like the first step toward her dream.
She could hardly believe he’d responded. “I had built up these characters and this mythos of Ren & Stimpy in my head,” Byrd, now 37, told BuzzFeed News. “It was exciting.”
Soon, she said, she began receiving boxes of toys and art supplies from 39-year-old Kricfalusi, better known as John K. He helped her get her first AOL account, through which he convinced her he could help her become a great artist. He visited her at the trailer park where she lived in Tucson, Arizona. “I thought I was still his little cute friend,” she said. And then, when she was still in 11th grade, he flew her to Los Angeles to show her his studio and talk about her future. She said that on the same trip, in a room with a sliding glass door that led to his pool, he touched her genitals through her pajamas as she lay frozen on a blanket he’d placed on the floor. She was 16.
In the summer of 1997, before her senior year of high school, he flew her to Los Angeles again, where Byrd had an internship at Spumco, Kricfalusi’s studio, and lived with him as his 16-year-old girlfriend and intern. After finishing her senior year in Tucson, the tiny, dark-haired girl moved in with Kricfalusi permanently at age 17. She told herself that Kricfalusi was helping to launch her career; in the end, she fled animation to get away from him.
Since October, a national reckoning with sexual assault and harassment has not only felled dozens of prominent men, but also caused allegations made in the past to resurface. In some ways, the old transgressions are the most uncomfortable: They implicate not just the alleged abusers, but everyone who knew about the stories and chose to overlook them. 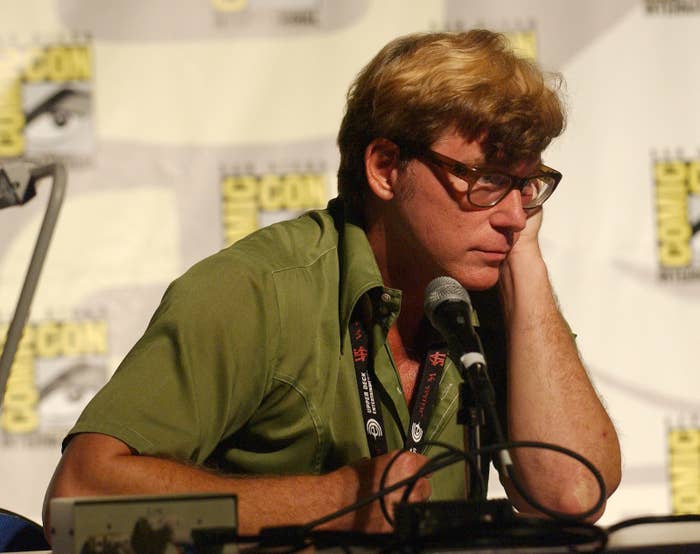 Although sexual abuse allegations against Kricfalusi have never been made public before, his relationship with Byrd has been an open secret within animation — so open that “a girl he had been dating since she was fifteen years old” was referenced briefly in a book about the history of Ren & Stimpy. Tony Mora, an art director at Warner Bros., and Gabe Swarr, a producer at Warner Bros., worked alongside Byrd at Spumco. The male artists said stories of how Kricfalusi sexually harassed female artists, including teenage girls, were known through the industry. “It’s always been there,” Mora said. Moreover, Kricfalusi made his fixation on teenage girls plainly obvious in his art, even as he worked on animated projects for the likes of Cartoon Network, Fox Kids, and Adult Swim. In an interview with Howard Stern in the mid-’90s, the radio host asked him about a character in the comic book anthology the cartoonist was then promoting. Stern called Sody Pop “a hot chick with big cans and nice legs.” Kricfalusi responded with a smile: “She’s underage, too.”
And yet Kricfalusi, 62, continues to be widely celebrated as a pioneer in the male-dominated field of animation. Creators of shows including SpongeBob SquarePants, Adventure Time, and Rick and Morty have cited Ren & Stimpy as an influence. After Nickelodeon fired the perpetually behind-schedule artist from Ren & Stimpy in 1992, he became an early proponent of art and shows made just for the internet. His output has slowed down, but he enjoys a living-legend stature that prompted 3,562 people to fund a Kickstarter campaign for his short Cans Without Labels, which he screened at a prestigious animation film festival in 2016. He made art for Miley Cyrus’s 2014 Bangerztour; he animated two credit sequences on The Simpsons, the most recent in 2015. Until the publication of this story, his portrait hung on the wall at Nickelodeon.
On Kricfalusi’s behalf, an attorney responded to a detailed list of allegations in this story with the following statement:
“The 1990s were a time of mental and emotional fragility for Mr. Kricfalusi, especially after losing Ren and Stimpy, his most prized creation. For a brief time, 25 years ago, he had a 16-year-old girlfriend. Over the years John struggled with what were eventually diagnosed mental illnesses in 2008. To that point, for nearly three decades he had relied primarily on alcohol to self-medicate. Since that time he has worked feverishly on his mental health issues, and has been successful in stabilizing his life over the last decade. This achievement has allowed John the opportunity to grow and mature in ways he’d never had a chance at before.” 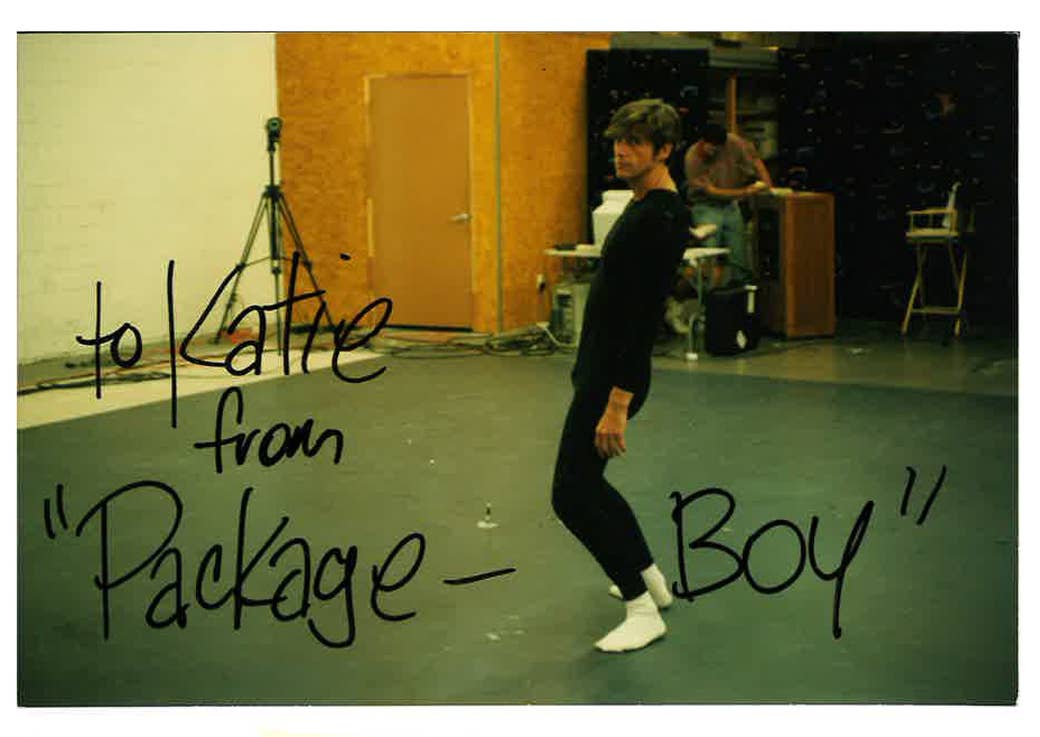 A photo sent to Rice by Kricfalusi

While Byrd felt deeply alone when she left animation, she later realized she hadn’t been the only underage girl Kricfalusi groomed for a relationship. In 2008, long after she last saw Kricfalusi, Byrd reconnected with an old internet friend: the artist Katie Rice. Kricfalusi introduced them through AOL in the mid-’90s, when they were still children, telling them he’d hire them both at Spumco someday. Although Kricfalusi never had a physical sexual relationship with Rice, he began hitting on her when she was a minor, she said, behavior that ranged from writing her flirty letters (“I bet you’ll be up to no good. Just like me,” he wrote in 1996) to masturbating while she was on the phone. In 2000, when Rice was 18 and trying to break into animation, Kricfalusi offered her a job. Once she started working for him, Rice said, he persistently sexually harassed her.

“I know a lot of people struggle with the ‘art vs. artist’ thing.”


Old letters, emails, and transcripts of AOL conversations between the women and Kricfalusi back up many of their claims. They each have witnesses to parts of their stories. Yet both women worried that they sounded “crazy.” For years, they chose to keep their experiences private, because coming forward didn’t seem like it was worth the risk. Rice feared retribution from his many supporters. Neither woman thought they’d be taken seriously.
Now they believe the world has changed. Byrd feels the time has come for Kricfalusi to be held accountable, particularly, she said, after the police told her in December that Kricfalusi’s alleged crimes against her were too old to investigate. “He shouldn’t be able to get away with that,” she said.

And while Byrd teaches philosophy and undergraduate writing classes, Rice still works in animation and regularly encounters people asking her what it was like to work for “a legend.” It made her hesitant to criticize him, as if it would be her fault for tainting his work. But, sitting in a Burbank restaurant, she said, “I know a lot of people struggle with the ‘art vs. artist’ thing, and I get it. Like, I love Rosemary’s Baby. But would I watch another movie that he made, knowing what I know now?” she said, referring to the multiple rape allegations against filmmaker Roman Polanski.
“I would say no, I don’t want to watch it. I don’t want any part of that. There’s nice people you can hire. There’s nice people who can make things, there’s nice people who make cartoons. … They’re just as -flicking-g good.”

More at link above.

Well, that's that then, another sleaze bag to add to the list.

John Kricfalusi also created Ren & Stimpy "Adult Party Cartoon" series. I watched one snippet of it and it was sexual garbage. It makes me feel disgusted now but I thought these cartoons were normal funny cartoons since I just heard of them (both) - appears I was wrong about that.

FOTCM Member
At that time I loved them because they were quite "irreverent" in comparison to other cartoons. Irreverent and twisted of course, and I certainly liked them a lot, because my life was quite twisted at that time too, I must to confess. I was always struck about the obsession of Ren and Stimpy's writer, to show them under subtle homosexual tendencies. There is a particular chapter where Stimpy becomes famous, and Ren misses it and cries for him as if it was his beloved wife who left. Sometimes they slept together in a double bed, and sometimes let glimpse that they had a very "hectic" night.

If I'm not wrong Ren and Stimpy's cartoonist participated in Bjork's video too; "I Miss You".

Ambassador
FOTCM Member
I had a friend who really liked this cartoon. Perhaps as a graphic designer he could see the value in the animation, but I just couldn’t bring myself to like it. There was always something rather off about it

Is there any inch of the entertainment world that isn’t tainted by sexual abuse?

SlipNet said:
This is an absurd comedy from my childhood that still amuses me, not so much with its humour overtly, but with the extremity of the artwork. The animation harks back to the golden era of animation, but has an acerbic edge to it that is rooted in the early 90's culture.

I've never seen this before now and to be honest it was like a bad trip. I can hardly even imagine kids watching it for fun.

The show was pulled from it's 6pm slot early on, and then went out at about 10.30pm on a different channel back went it first aired (early 90's). This is actually a mild excerpt, a lot of it was way weirder. The episode where Ren has a toothache has passed into dark legend.

Very sad to learn that this show is once again the product of a perv, though I understand that this show's warped humour is hardly cass-friendly. Guess my sense of humour needs to grow up a bit....
You must log in or register to reply here.
Share:
Facebook Twitter Reddit Pinterest Tumblr WhatsApp Email Link
Top Bottom