Role of viruses in human evolution

FOTCM Member
Frank Ryan: Virusphere, The End of the World as We Know It (What happens if We Kill All the Viruses)

Interesting interview with Frank Ryan on the Evolution 2.0 channel

Gaby said:
Fascinating topic, quotes and food for thought. Downloaded the documentary into an mp3 so I can listen to it later.

I remember reviewing a couple of articles that seem to support the information quoted in this thread:

"Junk" DNA includes a whole subset of names such as introns, retrotransposable elements, and non-coding RNAs (ncRNAs). In fact, ncRNAs are often located near genes known to be important to both stem cells and cancer, to serve as enhancer elements...

The frustrating thing is that it just transfers all the evolution theory into another planet so to speak, which then comes to this reality via a comet. But how did it originate in the "other planet"? The Cs had some very interesting things to say:

Session Date: 4 March 2012 Present: Laura, Ark, Belibaste, Perceval, Andromeda, Ailen, Bubbles, PoB, Burma Jones, Psyche, Mr. Scott Rain was in the forecast for this evening, but no storm warnings had been posted. At almost the exact time we had scheduled the session, the wind began to blow...

And then, "junk" AKA "non-coding" DNA is related to stem cells:

Genes and Junk Do you remember learning about Junk DNA when you took Biology in high school? The term was used to described 98% of the human genome that doesn’t make up its approximately 22,000 gen… This is how I see it:


Life is a sea of thoughts​
Thought forms range from the one-idea to a complex knowledge of the infinite​
Thoughts create matter​
Viruses are the simplest form of life-imbued-matter​
Viruses are Thoughts made manifest​
Viruses can mutate by adding/subtracting thoughts​
DNA is a relational database of thoughts​
Viruses can append/delete thoughts to the DNA relational database​
The viral altered DNA changes the inter-relationship of specific or group thoughts​
The effect of the viral altered DNA on the organism ranges from very good to very bad and is dependent upon the organisms FRV​
Therefor, the thoughts that we manifest determines how we are affected by Thoughts made manifest!


To further the idea of thought centered universe there is a new hypothesis that the universe is a self simulating existence of pure thoughts.
If I understand C's teaching of our multidimensional existence this new hypothesis seems to describe the universe as the way the C's have.
From the article: The Self-Simulation Hypothesis Interpretation of Quantum Mechanics
(This may belong to another forum.)
"Philosopher Nick Bostrom famously considered this in his seminal paper Are you living in a computer simulation?, where he proposed that all of our existence may be just a product of very sophisticated computer simulations ran by advanced beings, whose real nature we may never be able to know. Now a new theory comes along that takes it a step further – what if there are no advanced beings like that either and everything in "reality" is a self-simulation that generates itself from pure thought?"

"But where does the physical reality that would generate the simulations comes from, wonder the researchers? Their hypothesis takes a non-materialistic approach, saying that everything is information expressed as thought. As such, the universe "self-actualizes" itself into existence, relying on underlying algorithms and a rule they call "the principle of efficient language.""

"Under this proposal, the entire simulation of everything in existence is just one "grand thought". How would the simulation itself be originated? It was always there, say the researchers, explaining the concept of "timeless emergentism". According to this idea, time isn't there at all. Instead, the all-encompassing thought that is our reality offers a nested semblance of a hierarchical order, full of "sub-thoughts" that reach all the way down the rabbit hole towards the base mathematics and fundamental particles. This is also where the rule of efficient language comes in, suggesting that humans themselves are such "emergent sub-thoughts" and they experience and find meaning in the world through other sub-thoughts (called "code-steps or actions") in the most economical fashion."


In correspondence with Big Think, physicist David Chester elaborated: "While many scientists presume materialism to be true, we believe that quantum mechanics may provide hints that our reality is a mental construct. Recent advances in quantum gravity, such as seeing spacetime emergent via a hologram, also is a hint that spacetime is not fundamental. This is also compatible with ancient Hermetic and Indian philosophy. In a sense, the mental construct of reality creates spacetime to efficiently understand itself by creating a network of subconscious entities that can interact and explore the totality of possibilities." ​
_________________________________
Question: Are space, time and physical constants such as gravity sub-thoughts? Are the physical constants mathematical equations plus a connected thought form?

If all of this is hard to grasp, the authors offer another interesting idea that may link your everyday experience to these philosophical considerations. Think of your dreams as your own personal self-simulations, postulates the team. While they are rather primitive (by super-intelligent future AI standards), dreams tend to provide better resolution than current computer modeling and are a great example of the evolution of the human mind. As the scientists write, "What is most remarkable is the ultra-high-fidelity resolution of these mind-based simulations and the accuracy of the physics therein."

The team also proposes that in the coming years we will be able to create designer consciousnesses for ourselves as advancements in gene editing could allow us to make our own mind-simulations much more powerful. We may also see minds emerging that do not require matter at all. 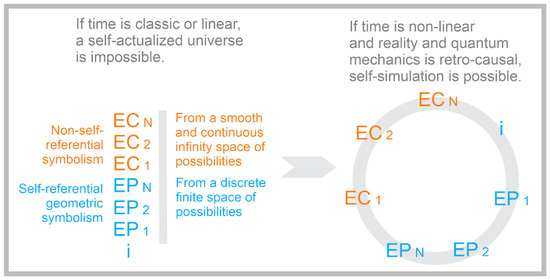