The Perseids - Don't Forget to Look Up! 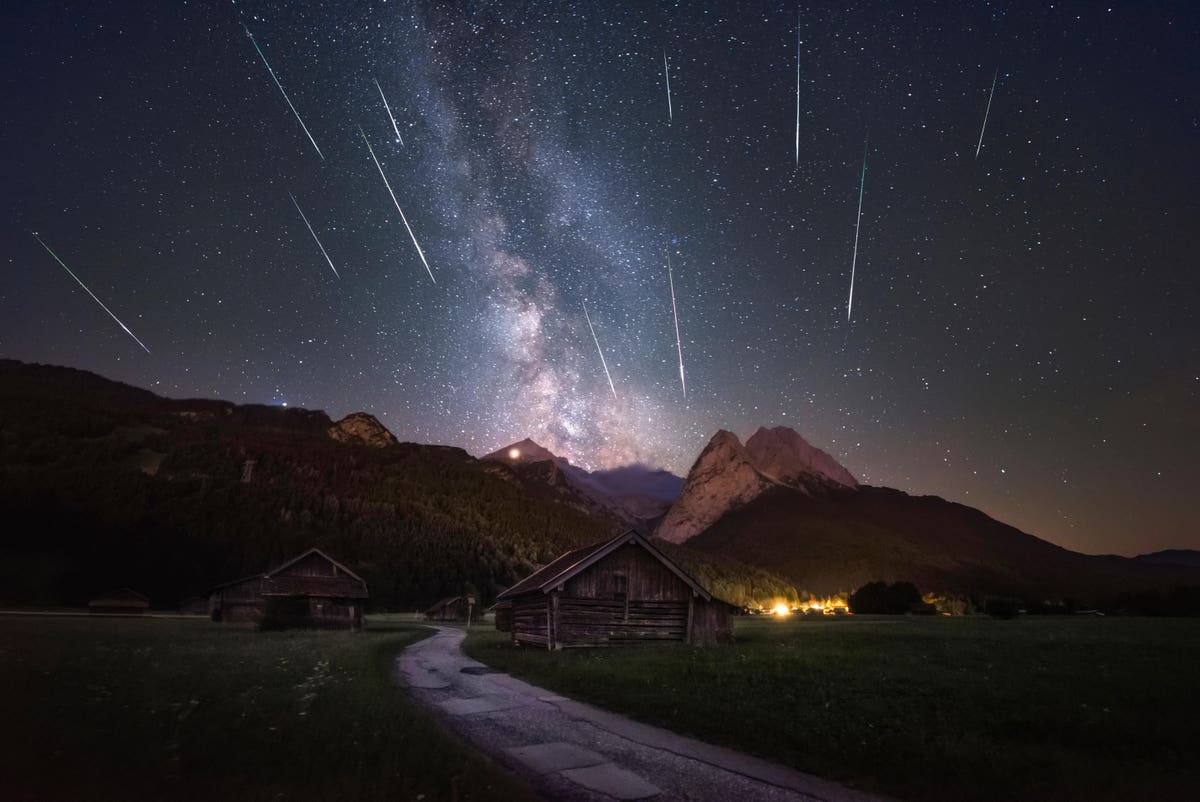 This Year’s Perseid Meteor Shower Will Be The Brightest For Years. Here’s How To See Up To 50 ‘Shooting Stars’ In An Hour

There will be almost no moonlight interference for August’s Perseids, the year’s best display of ‘shooting stars,’ which began at the weekend. Here’s when the all-important peak night is—and how to see as many ‘fireballs’ as possible.

Will you see Perseid “shooting stars” this summer? There will be almost no moonlight interference for August’s Perseids, the best meteor “shower” of the year. That term is a little misleading—we’re talking about 50 shooting stars each hour during the peak night, which isn’t like being “rained-on” by shooting stars, as some imagine.

What the peak night of the Perseids is great for is getting outside with friends—preferably in a very, very dark place—and keeping your eyes open (and away from smartphones) in the hope of catching a good number of shooting stars. You might even spot a “fireball,” a meteor with a bright, persistent train.

The best-loved and most comfortably observed of all shooting stars displays, here’s everything you need to know about the Perseid meteor shower in 2021, which promises to be the best for years if skies are clear:

Although it began on July 17 and will continue through August 26, 2021, the date you want in North America is the night of Wednesday/Thursday, August 11-12—the peak night. That’s when the meteor activity reaches is highest and thus the rate of shooting stars will be the highest. But the next night will be almost as good, and possibly better for Europe.


Why is the Perseid meteor shower predicted to be so good in 2021? ​

Moonlight, or, rather, a lack of. On the peak night of August 11-12, 2021 the Moon will be just 13% illuminated and set well before the peak begins. The observing conditions are thus perfect … if the skies are clear. 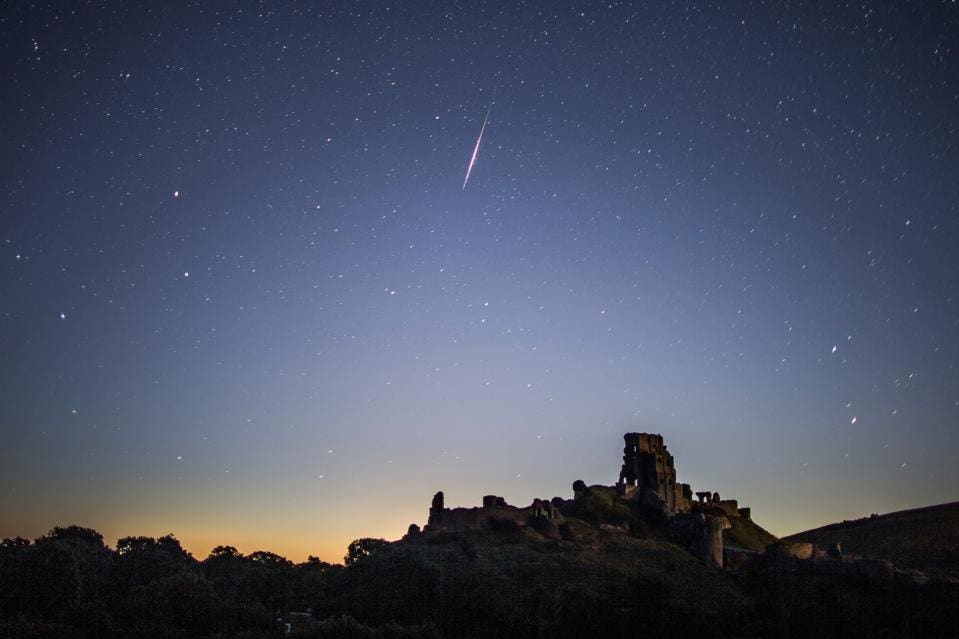 A Perseid Meteor flashes across the night sky above Corfe Castle on August 12, 2016 in Corfe Castle, ... [+] Getty Images


Why are they called the Perseids?​

As the Perseid meteor shower peaks, its shooting stars appear to be coming from the area of the night sky occupied by the constellation of Perseus, which is rising in the northeast after dark during August in the northern hemisphere.

That’s an illusion, of course, because it’s a celestial show created by Earth’s atmosphere. Perseus is the radiant, the area that Perseids can be traced back to if you follow their trajectory, but shooting stars can be seen anywhere in the night sky.


What time is best to see the Perseid meteor shower 2021?​

The best time for observing the Perseids is after midnight. That’s because it’s only then that Earth is turning towards and moving full speed into the dust and debris. Look after midnight and you’ll see more Perseids, they’ll be higher in the sky, and they’ll be brighter.

However, despite predictions things can sometimes go awry, with the finest displays of meteors happening just before or after the peak. That—and the fact that clear skies cannot be guaranteed on the peak night—means that the savvy meteor-hunter should be looking up in the nights before and after (so Tuesday/Wednesday, August 10–11 and Thursday/Friday, August 12-13), but also in the entire week of the Perseids peak. 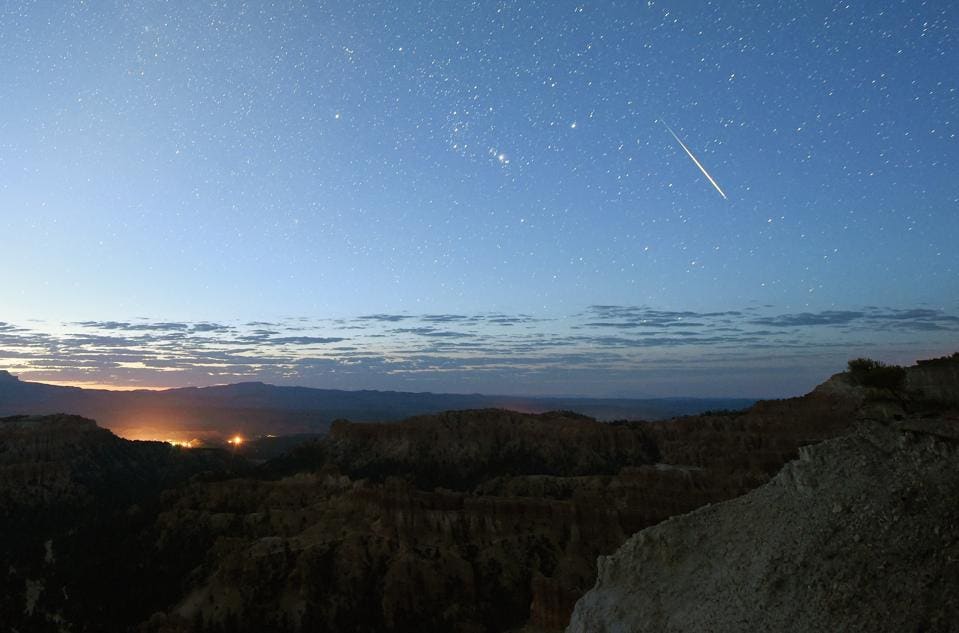 A Perseid meteor streaks across the sky above Inspiration Point early on August 12, 2016 in Bryce ... [+] Getty Images


What causes the Perseid meteor shower? ​

The Perseids are caused by dust and debris left in Earth’s orbital path around the Sun by the giant comet 109P/Swift-Tuttle. Twice the size of the comet that did for the dinosaurs, it last entered the inner Solar System in 1992. It’s due back in the year 2125.

Shooting stars occur when meteoroids—particles of dust and debris from comets—strike Earth’s atmosphere and burn-up. They release energy in the form of photons—light.

Although the next meteor shower is officially the Orionids, which peak on October 20-21, 2021, that one brings about 10-20 shooting stars per hour.

It’s worth keeping your powder dry for the only other two meteor showers in 2021 that, like the Perseids, are similarly bereft of moonlight—the Draconids (8-9 October, 2021) and the Taurids (4-5 November, 2021), though they too only bring around 10 shooting stars per hour.

All the more reason to make a plan to get outside looking up from a dark sky destination this week—good luck!

FOTCM Member
https://twitter.com/i/web/status/1422888841459867656
The peak of the Perseids meteor shower is gradually approaching, and many meteors are flowing every night. It looks like a meteor that flowed from the night of August 3rd to the dawn of August 4th, 2021 was seen with a wide-angle camera from Fuji to the north. The meteors that flowed overnight are flowing all at once. Many fireballs also appeared last night. I can't wait for the maximum.


https://twitter.com/i/web/status/1422630154983985155
It looks like the fireball that flowed at 2:42:56 on August 4, 2021 was seen with a wide-angle camera from Fuji toward the northeastern sky. The fireball of the Perseids meteor shower left a slight mark. The lower right is Mt. Fuji, and the mountain hut is shining.

FOTCM Member
It's going to be a good show. Perhaps like that of the 2016 Perseid's encounters. 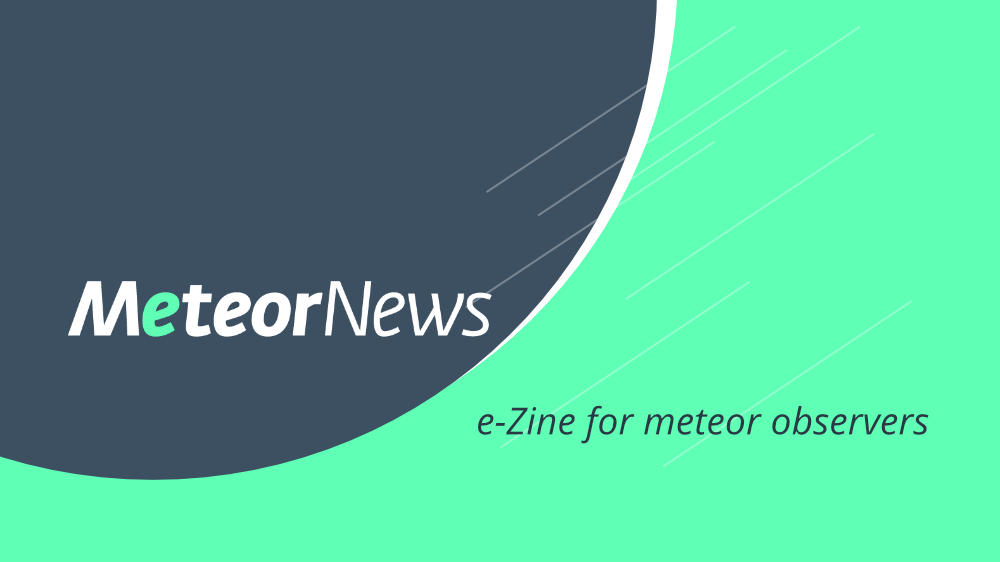 An overview of the radio observations during July 2021 is given. The graphs show both the daily totals (Figure 1) and the hourly numbers (Figure 2) of “all” reflections counted automatically, and of manually counted “overdense” reflections, overdense reflections longer than 10 seconds and lo


https://twitter.com/i/web/status/1423085735528132609
It looks like the fireball that flowed at 3:52:35 on August 5, 2021 was seen with a wide-angle camera pointing from Fuji to the southwestern sky. The fireball of the Perseids meteor shower, which was bright in the clouds. The star below the fireball is Jupiter. Each July and August the Earth encounters debris left behind from comet 109P/Swift-Tuttle. This comet has an orbit of 133 years and last entered the inner solar system in 1992. Even though the comet now lies in the outer portions of the solar system, far away from Earth, we still encounter debris that has been left behind during the many trips this comet has made through the solar system.
Click to expand...

FOTCM Member
It was overcast with Fog (of course), so this years view of the Perseids meteor shower will have to wait till next year...


https://twitter.com/i/web/status/1426192617465864193
#PERSEIDA ROZADORA #SPMN120821E CAPTURED ON #CANARIAS at 9:15 PM TU by R. López (@StargazerLZT) from Playa Blanca,#Lanzarote . In this type of event, the radiant is low on the horizon and the geometry makes the meteors penetrate tangentially generating huge traces.


https://twitter.com/i/web/status/1425899365994942464
Last night I was able to catch the Perseids meteor shower through a small gap in the clouds. This is a view of the fireball of the Perseids meteor shower that flowed at 23:14:34 on August 12, 2021 with a camera facing north from Hiratsuka's home. Since two meteors are flowing in parallel, one meteor may have split and rushed into the earth.


https://twitter.com/i/web/status/1425813603882463242
Line-1
Unfortunately, tonight's Hiratsuka and Fuji are covered with thick clouds, and it seems difficult to observe the Perseids meteor shower. The other day, from 0:00 to 4:00 on August 11, 2021, I tried to shoot the meteors of the Perseids meteor shower captured by a camera from Fuji in all directions at once. Do you know which direction each camera is facing?
Line-2
This is a meteor trail added to the previous video. The correct answer is that the first step is north, and you can see the lights of mountain lodges and climbers on Mt. Fuji. The second row is east on the left and south on the right, and the sky is bright with the city lights. The third row is southwest on the left, northwest on the right, and the southwest is the opposite of the radiant point, so it falls directly below. The left of the 4th row is the high sky in the north, and the right is the high sky in the south.

I had switched my working schedule with a colleague, and ended in the train depot which lies 2 km from my home )instead of ending at the opposite side of town) - and therefore was able to watch the night sky at my favorite spot, close to home a couple hours after midnight on 12 Aug 2021. What stunned me was the LACK of any meteors. I only saw a single one - albeit a very bright one, -3 or -4.0 M (Planet Venus class brightness) going off across in sign of Taurus, just to the left of the main star Aldebaran. But that was about it. (I did suspect that the maximum of the meteor swarm likely was delayed)

Apparently, according to spaceweather.com, them judging the reports from around the world, it was indeed indicated that the Perseids had not yet had reached its maximum. (They did one night later, last night)

Here the scenery from the first night after work. Of course, I didn't catch the meteor, and the image was handheld, just capturing the feeling of the sky.

My husband and our friend Ruth from Sicily and Tekki the dog, we all went out together at midnight, to the same spot i stood at the night before; It is a small field, surrounded by high trees on each side, which despite the light polluted sky, still allows you to be almost completely shielded from any direct light sources (glaring street lights). We had with us, home made baked cheesecake, and three bottles of that stunning tasty german beer "Aventinus". And there we were sitting/lying down, watching the sky, and counted the meteors. We counted around 6-7 during 1.5 hours.

Perhaps the most beautiful aspect in all of this was; being together with friends ! We noticed how we were totally detached from stress and problems, feeling the wonders of the forest, the stars, and the beautiful mild air (we had jackets on). It all gave such a tranquil feeling, a rare presence of peace and that wonderful "bubbly" feeling of laughter; born in mind and stomach, tickling the throat and then sparking a bunch of "fireworks" exiting our mouths. So much humor. So much love. And again... this tranquil feeling of peace. We were not drunk, barely tipsy - so it wasn't an illusionary experience

It appears to have become a sort of tradition for us, to have a "Perseids night out" a couple hours around midnight, lying down in the grass, under the bare sky, watching meteors, gazing at the stars, readings names and signs, with friends and family. Ever since a child in Berlin, I've always felt that there was a silent, powerful force - making even the largest problems appear suddenly much smaller - by just giving yourself away under the light of the stars.

The photos i took look brighter than the scene was in reality. It was very dark and you couldn't focus at all with the camera (so you go with manual focus instead). The camera was set at a high ISO 12.800 sensitivity, with a very bright lens aperture of ƒ1.4 - and an handheld exposure time of 1 second.

FOTCM Member
https://twitter.com/i/web/status/1426813618834874370
Line-1
An unexpected burst of activity from #Perseides was observed on 08/14 between 6 a.m. and 9 a.m. UT from Canada and confirmed in radio detection. A call for testimony is launched.
Line-2
#Perséides: burst of activity on 08/14 between 6 a.m. and 12 p.m. UTC also confirmed by the #meteor American cam from the CAMS network. The ZHR, Zenith Hourly Rate, would have risen to 210 #meteore /time #Perseids 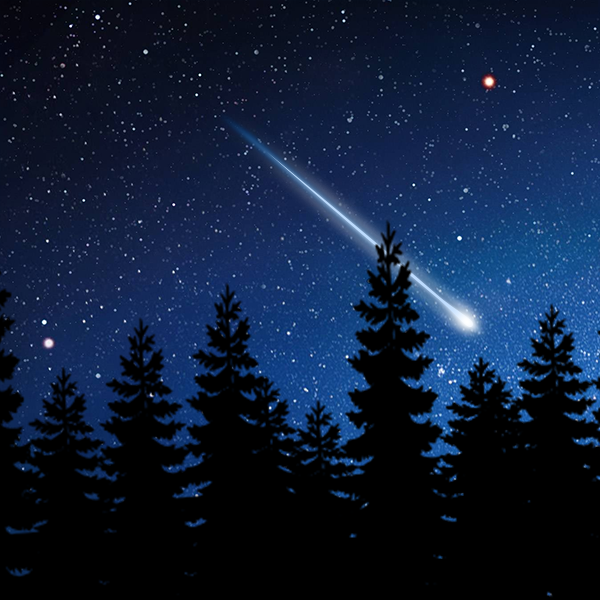