You seem to have caught it between frames of video that elongates it. It seems that it actually has two segments like in the still below. So it could be a drone. Can't be sure though. Set the video playback speed to 0.25 (click on settings wheel bottom right) and have a look.

Yes, in most of the frames it has 2 parts. But if it was an object with 2 actual segments, like a drone for example, then the 4 part frame would be strange because a static but moving object would be captured as blurry/smeared between its 2 positions (motion blur) instead of being captured as in two distinct positions at once. With a bugs wing you get distinct positions because these are the actual up and and down positions of the wings during the time frame and only the body would blur in a line. And the number of 'segments' can vary depending on the speed of the wing beat.
S 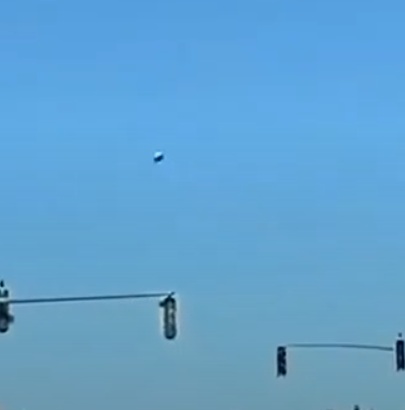 A UFO appeared live on a Brazilian newscast

Ambassador
FOTCM Member
What do you think about this?

On the 12th March 2021, while our ship was in Indian ocean sailing towards Bangladesh, we saw a mysterious light show on the night sky for 20 minutes around 2000 hrs (0800 pm). Our 3rd mate called me and told me about it and to bring my camera to photograph the moment. I went to bridge a minute later. There were also other people on the bridge including our Captain and Chief Engineer. We all saw the same thing. The Captain sir was the 1st one who noticed the light. I saw it 2-3 minutes later as the 1st picture on the video. But our captain sir said, initially when he saw it, it was more smaller and much brighter. I started to capture a timelapse with 1s exposure and 1 second interval and record 400 photos as you can see it was glowing and expanding in the timelapse, easily visible in naked eye at night. After the light disappeared, I took a photo of our ship's position (Latitude, Longitude, UTC time). We discussed about it, but nobody was sure about what it was or never saw this kind of light before. So, did any other people noticed this same event? Or can anyone explane it? If you can, please let me know in the comments. Thanks in advance ☺
Click to expand...

Hunters captured on video UFO-transformer in the U.S. state of Texas


UFO sightings over Shaunie Peak in the U.S. state of Men


A UFO flight was observed in the sky over India


A UFO flew near a helicopter in the sky over Bangkok, Thailand

Unidentified space object in the sky over Yakutia

Something amazing happened to me this morning.

Around 06:00 hours I have gone out to my terrace to have a coffee before going to work.

The sky was clear and the stars were visible.

Suddenly a very bright star appears moving. And behind another and then two together and more and more.

As they moved away a little the first ones faded and disappeared until they all went out.

It was very nice and even I was in a state of amazement, when more began to appear in the same place.

And this time there were countless lights one after another. It lasted almost 2 minutes.

The thought of help is on the way came to mind. It does not mean it has something to do with it, but it is what I thought.

Many times I have seen one or two lights moving but nothing like this.

Moderator
FOTCM Member
It could be related to the latest launch of Starlink satellites a few days ago.

Especially if they can turn their light on and off. Sometimes they travel two by two, changing their position up and down, and can be seen with the naked eye with the light pollution of a city, in which only a few stars can be seen, the brightest.

But yes, It could be anything.

Now you can maybe imagine this guy with 200 kg of TNT or C4 or whatever flying and detonating himself. Why would he do it ? I think that there is a huge probability that armies could have ability to completely erase ability to think (of a certain person) and make zombies of some people.