Mike said:
I did just a quick scroll/fast forward through the video and seems like he is relating the 'angels' to plasma phenomenon. Could be that has something to do with the shapeshifting 'angel' UFO, as well.
Click to expand...

the video contains an image of “white auroras” - but to be really honest - the first thing that sprung into my mind was that the photo showed the results of light painting with a glow-stick. I have light painted so much in my life in photography - but that image does not resemble real aurora to my eyes. But i could be wrong. (I leave a slight possibility open…

I will look at it anew at my home computer when i get home.

Of course, white northern lights do exist as they do in many other colors, but I can’t remember any image of auroras looking like that photo (in the video).

Additionally: i also notice inconsistency in the angles of the claimed white aurora. Of course generally spoken, you expect an outbreak to radiate, as you most likely use a very wide lens. But within the aurora you do not get different angles like those shown in the picture. It just looks like home made light paintings. Beautiful for sure - absolutely. I love it. And somebody had fun. But the interpretation of it ain’t.

It seems to have been taken against the signs Bootes and Hercules. The expose was short as a stars are dot formed. So no longer than max 15-20 seconds exposure with a 14mm - 20mm lens.

it could also been accomplished through a double exposure because to me the lightpaintings look upside down.
Last edited: Aug 5, 2021

It could be a solar balloon 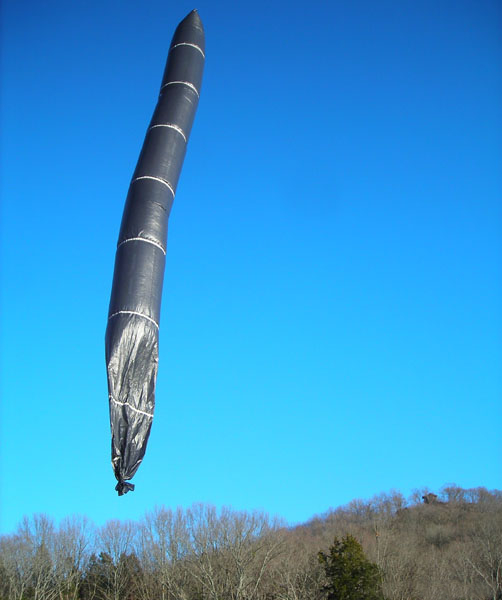 Yeah, that's probably it. Thanks for your input!

Maybe not in the sky but... thats weird

Moderator
FOTCM Member
if one looks to the right and the left of the "object", a similar optical effect. Basically it's a mirage caused by the bending of light due to rapid air temperature variations with height over the water's surface.

added: some local image enhancement to see the other instances of optical distortion in the image:

PabloAngello said:
Maybe not in the sky but... thats weird
Click to expand...

Probably this is not UFO. It is too close to be a UFO and shape is little odd like a black hat w.r.t other video's.

In my opinion; It looks like an islet (which is relative close to the video maker, compared to what the background mountains are, together with the other more distant islets) - and while the person is filming, the closer islet appears to move.

While at the same time, the islet is distorted due to the air layer closest to the water surface having a different temperature than the above layer, and therefore that results into a mirage (distortion effect) due to different densities of the air. That effect is clearly visible all along the water surface in the distance, not just the islet. So, it is the same kind of effect what we can spot when looking through binoculars when observing a ship over the open oceans, getting distorted.

Well, my words come from mainly a 3D mind looking at a 3D world...

UFO SIGHTINGS CAUGHT ON CAMERA | A compilation of the internet's most divisive videos
7NEWS Australia Jul 5, 2021

mkrnhr said:
Basically it's a mirage caused by the bending of light due to rapid air temperature variations with height over the water's surface.
Click to expand...

FOTCM Member
UFO filmed in Tukey where the Russian aircraft crashed. In the picture above we can see the smoke of the crash.

FOTCM Member
even if some videos are not UFOs in the strict sense of the word, visual phenomena resembling them seem to be on the rise in recent years

FOTCM Member
So today in the MSM news there was this articulation:

Youtube Movie
as far as hay may have fallen, I watched this video in slow motion 0.25 (on youtube) and either these are fast birds, or "faster hay blows" or "Something" else is flying there.

In these Minute:second - you can see very fast "objects" whatever they are.

What do you think about it?


A rain of hay has fallen in Zywiec. "Can anyone explain? The explanation is simple
Click to expand...

It was a beautiful day with calm weather, until suddenly bundles of hay fell from the sky in Moszczanica (a district of Zywiec)," describes the twojapogoda.pl portal. Where did they come from? The answer is simple. It is all the fault of the so-called dust devil.

The rain of hay in ZywiecThe rain of hay in Zywiec - Stanislaw Karcz / YouTube / Stanislaw Karcz
Mr Stanislaw recorded the flying hay in Zywiec and put the video on YouTube. As he described to the twojapogoda.pl portal: "Tens of strange objects were falling very slowly from above the clouds, which in almost windless weather were coming from high above, from the northern direction, from the Magurka Range. It soon became clear that these "objects" were hay bundles. "Maybe someone will try to explain". - Mr Stanislaw asked under the video.


Dust devil cause confusion
"Only one phenomenon is able to lift the straw high into the air and put it into a characteristic rotational motion" - answer experts from the Your Weather portal. It is the so-called dust tornado or dust devil. What is it?

Dust devils are not associated with thunderstorms and can occur during sunny weather. The vortex picks up various small objects, including dust or just hay. As Storm Hunters explain, this phenomenon is common in deserts and steppes and is related to the heating of the surface.

Dust devils have also been observed on Mars. If you look closely, you can see one gliding in the background in the NASA gif below:
Click to expand...

Lucius said:
So today in the MSM news there was this articulation:

Youtube Movie
as far as hay may have fallen, I watched this video in slow motion 0.25 (on youtube) and either these are fast birds, or "faster hay blows" or "Something" else is flying there.

In these Minute:second - you can see very fast "objects" whatever they are.

What do you think about it?
Click to expand...

Administrator
Moderator
FOTCM Member
Check this out. Could be "photoshopped", but the guy who took the video claims not.