Ancient Comet ‘Atlas’ is Back! Plus Giant Asteroid

Does anyone know what the official close distance the asteroid that will pass close on 29th April will be?

SOTTREADER said:
Does anyone know what the official close distance the asteroid that will pass close on 29th April will be?
Click to expand...

It's okay to make mistakes, SOTTREADER. Perhaps next time you could make clear to which post you were referring and just say you made a mistake?

I Karo, do you know if it will pass in the northern hémisphère ? I have Orion in south just up in front of me in winter...
S

Mariama said:
It's okay to make mistakes, SOTTREADER. Perhaps next time you could make clear to which post you were referring and just say you made a mistake?
Click to expand...

Thank you Mariana. I made an error... I fell for a fake news video where they were saying how close the asteroid will pass but it was a different asteroid all together that approached the planet in 2012.

I don't know what people get from posting things they know are fake.. just adds fuel to the fire against alternative news for the mainstream.

NASA’s Hubble Space Telescope has captured a striking view of a comet breaking into pieces.

FOTCM Member
This beautiful image of C/2020 F8 (SWAN) is from mid-April.

Explanation: Newly discovered Comet SWAN has already developed an impressive tail. The comet came in from the outer Solar System and has just passed inside the orbit of the Earth. Officially designated C/2020 F8 (SWAN), this outgassing interplanetary iceberg will pass its closest to the Earth on May 13, and closest to the Sun on May 27. The comet was first noticed in late March by an astronomy enthusiast looking through images taken by NASA's Sun-orbiting SOHO spacecraft, and is named for this spacecraft's Solar Wind Anisotropies (SWAN) camera. The featured image, taken from the dark skies in Namibia in mid-April, captured Comet SWAN's green-glowing coma and unexpectedly long, detailed, and blue ion-tail. Although the brightness of comets are notoriously hard to predict, some models have Comet SWAN becoming bright enough to see with the unaided eye during June.
Click to expand...

Another interesting thing that was unknown to me is that (besides Sun's magnetic pole switch) the heliospheric current sheet completely flattens out when Sun switches from one cycle to another - in other words the whole ecliptic becomes the interface between the opposite charges of heliosphere. I think it was Electroverse or WhatsUpWithThat or NoTricksZone website (sorry I can't remember) in their recent article where they mentioned that it just happened and the new solar cycle #25 begins. And C/2020 F8 (SWAN) as well as C/2019 Y4 (ATLAS) will be crossing ecliptic around end May/beginning of June as discussed earlier. Will the current sheet be still flat-ish at the time? And could this mean there is more chance for any comet going through the ecliptic at that time to perform some electromagnetic magic? I am just speculating here...

Moderator
FOTCM Member
SWAN is visible to the naked eye: 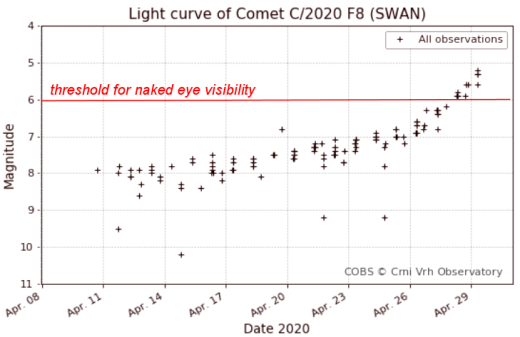 And by the way, even with the breakup , ATLAS is still a beauty too (25 pieces visible with the HST):

Moderator
FOTCM Member
You can use the website below, change location to your location under 'VISIBILITY RIGHT NOW' and see if the comet or celestial object is visible or not.

Don Cesar said:
I Karo, do you know if it will pass in the northern hémisphère ? I have Orion in south just up in front of me in winter...
Click to expand...

I'm sorry, just saw your message right now. I don't have an answer for you question, but maybe you can find answer in Vulcan59 post about skylive website, where you can adjust your location and look what is there in the sky.

karo said:
I'm sorry, just saw your message right now. I don't have an answer for you question, but maybe you can find answer in Vulcan59 post about skylive website, where you can adjust your location and look what is there in the sky.
Click to expand...

Thank you Karo, no problem for the timing !! In french we say «Mieux vaut tard que jamais» it means «better late than never»

mkrnhr said:
And by the way, even with the breakup , ATLAS is still a beauty too (25 pieces visible with the HST):

I am quite sure that all comet fragments are maintaining social distancing from each other.

FOTCM Member
For the record and for those who might have missed it, SOTT published this yesterday (from SpaceWeather): 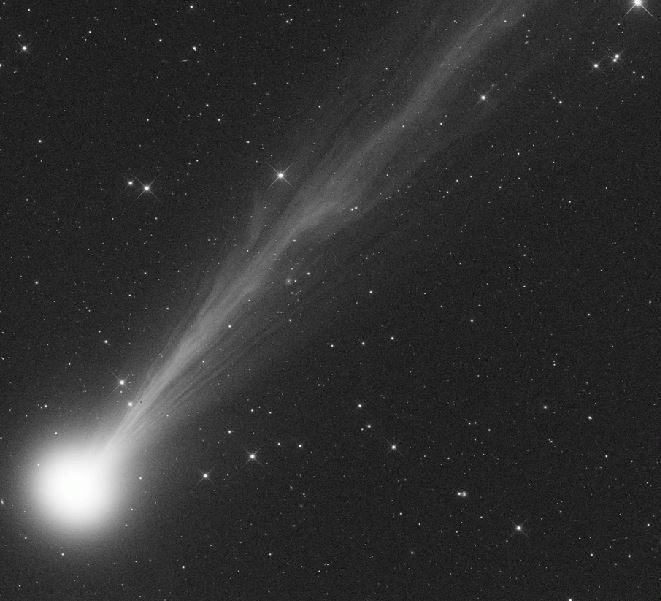 This week, an unexpected outburst from Comet SWAN (C/2020 F8) amazed observers in the southern hemisphere, who could actually see the comet brighten with their unaided eyes. What happened? It might have fragmented, exposing bright clouds of dusty...

Comet SWAN (C/2020 F8) is crossing the ecliptic plane about now, still approaching the Sun (May 27th) and greeting the Earth from its closest point on May 12th at 0.56 AU.

FOTCM Member
SWAN (C/2020 F8) is still very close to the horizon in the Northern hemisphere, even below at Greenwich, and the sunlight interferes with observations a lot. Latest magnitude around 5.4. Quite easy to spot with binoculars they say but with naked eye barely visible. This pic is from May 10th (probably through a small telescope):

Edit: Forgot to add this article: 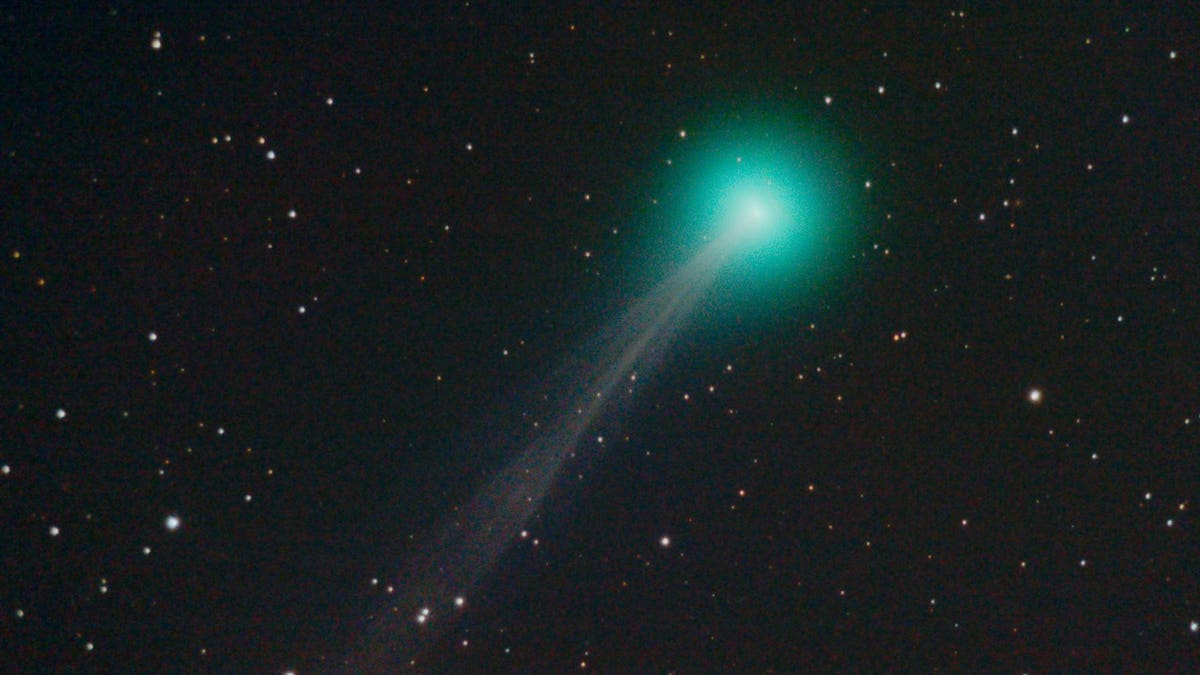 The Truth About Comet Swan, Today At Its Closest To Us. Will This Snowball Put On A Bright Show?

Will it be a super-bright naked-eye sight in the coming weeks?

Why Comet Swan will be tricky to see

Nor is the northern hemisphere about to get a great view of a bright comet. It’s not impossible that Comet Swan will prove an impressive night sky object, though photos of Comet Swan—officially designated C/2020 F8 (SWAN)—have so far been spectacular, but slightly misleading.

Comet Swan this week becomes visible from northern latitudes as its passes through the constellation of Pisces, but only in pre-dawn twilight skies currently lit-up by a bright moon, so the skies may be too bright to afford a good, clear, impressive view.

Is Comet Swan bright enough to see with the naked eye?

Comet Swan is currently 85,046,715 km away from Earth and just visible to the naked eye (though easier in binoculars) at a visual magnitude of 5.4.

It has been suggested that Comet Swan might reach a magnitude of 3, but hopes of that are fading.

“It is true that estimates are being affected by bright skies—twilight and the Moon—but earlier predictions of magnitude 3 or brighter are now looking optimistic,” says Nick James, Director of the Comet Section at the British Astronomical Association. As well as being relatively close to the Sun (so slightly lost in the Sun’s glare, and thus not visible in a truly dark sky), Comet Swan appears to have stopped brightening despite it getting closer to the Sun, which basically means that’s it now fading. “I think we'll be lucky if it gets to 4, but who knows?” says James. “It could flare up again so it will be worth observing.”

Will Comet Swan be a spectacular sight?

Worth observing, yes, but for the average stargazer looking for something spectacular? “I doubt if it will be much for the general public,” says James. “All the really spectacular images were taken when the comet was in outburst and in dark skies—they are the ones used in press articles, and they are very misleading.” The BAA keeps its own visual analysis page.


https://twitter.com/i/web/status/1257196552331956225
“We won't have anything like that,” says James. So it seems like the best images of Comet Swan and its green-glowing coma may already have been taken as it graced dark night skies of the southern hemisphere.

All hope is not lost … yet

However, it should be possible to observe Comet Swan from anywhere in the northern hemisphere from mid-May, when it should be an easy binocular object, if not a naked-eye object. It could even put on a surprise and become easily bright enough to see naked-eye. “Comets can do unusual things when they get close to the Sun,” says James. “We won’t really know how it performs until we actually see it go through perihelion—it could surprise us.”

What and when is perihelion?