Here's a link that explains how heat satellites could dissipate. There would be the angle, and the passages to the shade. But they would be surrounded with a thermal barrier made of a "super structure" (titanium, platinum ...), including aluminum. The aluminum to propretée that reflected light, and thus reflects heat. That would be enough to lower the temperature. https://fr.wikibooks.org/wiki/Les_contraintes_du_milieu_spatial/Des_contraintes_thermiques

Kisito said:
Also given that there is practically no air around the ISS, the law of thermodynamics does not seem to apply. Namely, the ISS should be heated between 1500 and 2000 ° C (2700-3600 ° F), and melt, since the aluminum can not convert its heat to another material outdoor which absorbs energy. Maybe I misunderstood the laws of thermodynamics. Here is a video that will better illustrate this:
https://www.youtube.com/watch?time_continue=4&v=wditVNOKf6c
Click to expand...

Hi Kisito, maybe you would find this article interesting:
http://science.nasa.gov/science-news/science-at-nasa/2001/ast21mar_1/

According to the article above, "Without thermal controls, the temperature of the orbiting Space Station's Sun-facing side would soar to 250 degrees F (121 C), while thermometers on the dark side would plunge to minus 250 degrees F (-157 C)." So I'm not sure where they got 1500-2000 from. The article above explains the different techniques they use to keep temperatures stable. I don't know how it all works exactly myself, but it's quite a stretch for others to think ISS is a 'fake' because 'it wouldn't survive the heat in the thermosphere'! There's a lot of thought and work that goes into making sure a satellite etc. 'survives' and that in some cases has an optimal environment for people to be in.

In the vacuum of space, the primary mode of heat transfer is radiation, so the thermal protection system must be highly reflective to manage dramatic temperature changes, allowing optimal performance of the spacecraft and its instruments, he explains. The company created light, feathery insulation consisting of many layers that reflect both the sun’s heat back into space and the interior warmth back into the spacecraft, maintaining a constant interior temperature.
Click to expand...

Kisito said:
Here's a link that explains how heat satellites could dissipate. There would be the angle, and the passages to the shade. But they would be surrounded with a thermal barrier made of a "super structure" (titanium, platinum ...), including aluminum. The aluminum to propretée that reflected light, and thus reflects heat. That would be enough to lower the temperature. https://fr.wikibooks.org/wiki/Les_contraintes_du_milieu_spatial/Des_contraintes_thermiques
Click to expand...

I'm not sure if I fully understand what is on that page, but I see it mentions the ''Thermal Control Subsystem''. I'm definitely not an expert! But I think regarding the above, you're closer to how things work. :)

People who claim that satellites would melt, or that the earth is flat, or that astronauts are actors, tend to 'see' 'red flags' where there aren't any! It's very important not to fall in their traps. The guy in the video is right somewhere near the end; there are a lot of lies being told to us, but these 'theories' are only a distraction, and they distract the people from finding out the real lies being told to us. FWIW.
M

Kisito said:
Another anomaly about ISS.
Here is a video that will better illustrate this:
_https://www.youtube.com/watch?time_continue=4&v=wditVNOKf6c
Click to expand...

In this video, the poor guy doesn't even have one single valid argument that would support his (pre-formed!) conclusion that all satellites are fake (he confessed to being a Flat Earther at the beginning of the video). Because of this, one cannot even argue with him because he actually doesn't say anything. It is pseudoscientific wiseacring.

This here is his core 'argument'...

Only light can transfer energy through space, as we're told. On earth you have to have some kind of medium to travel through. This is common accepted truth that the heat has to move through something, unless it's light. The same goes for the space station. How does heat that builds up inside the space station get out ... if there is nothing to dissipate through? There is not enough of collision of particles to transfer heat into the station, so how does this heat get out?
Click to expand...

... which exposes his ignorance regarding the conclusion he wants to reach. In the last sentence he validly excludes convection as a significant mode of heat transfer for satelliltes. Before, he also validly admits radiation as a significant mode for warming up of satellites, but it doesn't occur to him that radiation also is a mode for cooling down!

In space, radiation is the main mode of heat transfer. Simply put, any influx of heat from the Sun can be easily radiated back into cold space (2.7 K, or 2.7 degrees centigrade above absolute zero).

That is what is done on the ISS. The white panels that you can see in the image below are heat radiators who point towards open space, rather than towards the sun: 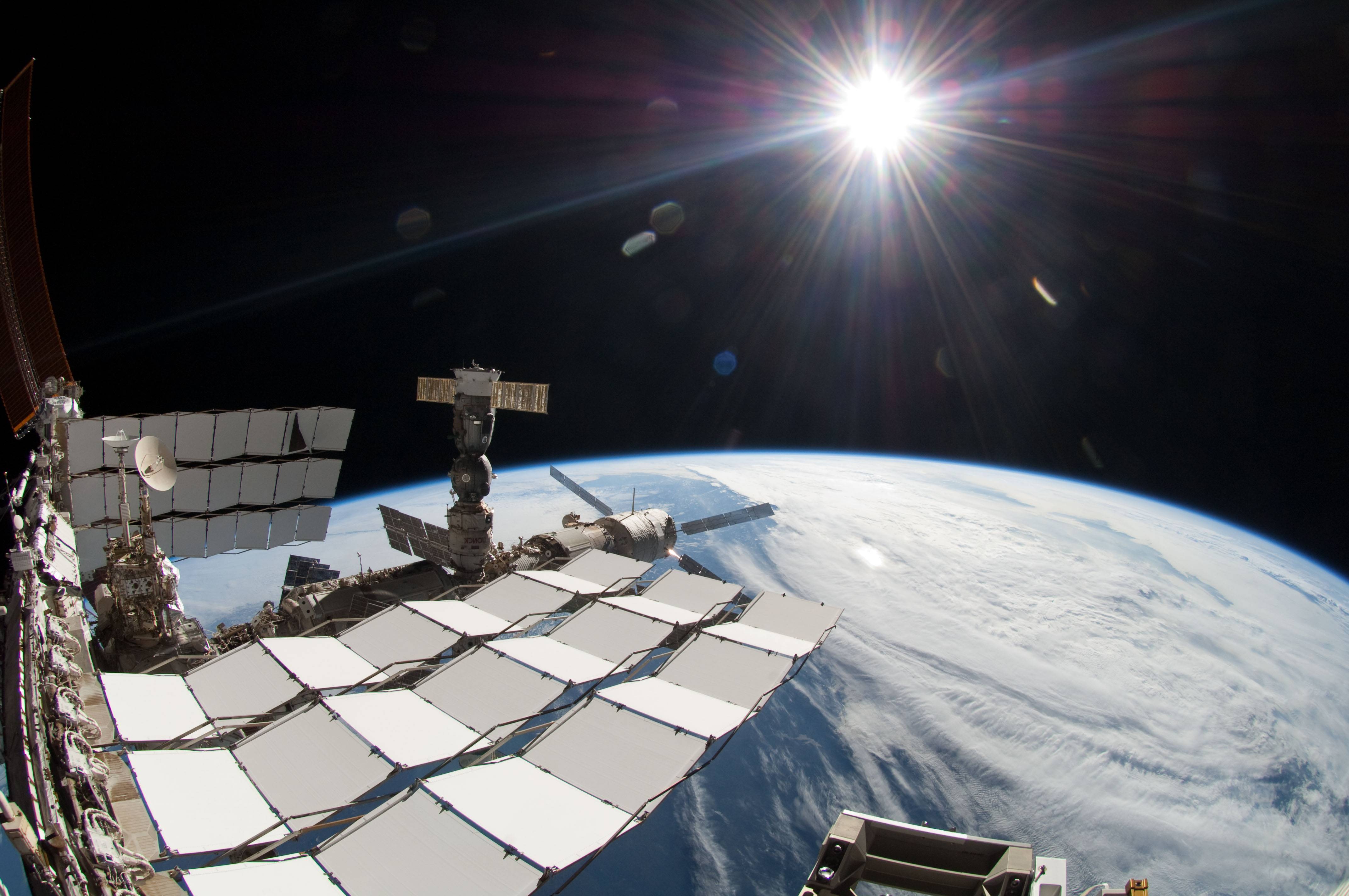 For satellites with fixed orientation relative to the sun, simply painting the sun-facing surface white, and the other side black, will do the trick.

By installing radiators of a certain size, it is possible to set the thermal equilibrium on a satellite or space station to any temperature - even temperatures that are comfortable for humans.

Thank you very much Oxajil and Data. You took a thorn from the side. I was a little embarrassed to expose this video and this question. Always the fear of appearing ignorant or arrogant. Data, your explanation to me is remarkable. I hope it will also enlighten other members.
You must log in or register to reply here.
Share:
Facebook Twitter Reddit Pinterest Tumblr WhatsApp Email Share Link
Top Bottom