Öööh! I thought I had a good grasp on how a lavine works, turns out I didn't have a clue...
It just doesn't stop does it!? And it just doesn't behave like "mere snow" anymore when it gets going. It' so much mass in there! :O
M

Incredible footage showing the true danger and power of an avalanche, snow and debris heads down the road like a freight train.﻿

ops, sorry I didn't notice.
A

Three mountain climbers from Switzerland and France have been killed in avalanches in the Swiss Alps in the past three days, police said on Monday.

The latest incident involved a group of five climbers in the Valais region close to the Hofathorn peak at 2,844 meters (9,330 feet) when a local man was swept away by an avalanche on Monday.

The 39-year-old was quickly found and recovered by his companions but later confirmed dead by the emergency services.

In a separate incident, a group of three mountaineers were hit by an avalanche in the Valais region on Saturday after leaving the track at 2,700 meters in the St. Luc region.

Rescuers managed to quickly locate two of the group, who had slight injuries, and used a helicopter to fly them to hospitals in Sion and Viege, but a 29-year-old Swiss woman was seriously injured and died on Sunday.

In a third incident, a 31-year-old Frenchman died in an avalanche in the Grisons region, in the east of Switzerland, after trying to climb the 2,376-meter-high Glattwang mountain alone.

His body was found buried under three meters of snow on Sunday after several hours of searches.

Police say a mass of snow collapsed over the path he took, which carried him more than a kilometer.

A winter storm warning is in effect until Friday morning at 4am. 6 to 10'' of new snow has fallen along the Sierra Crest above 7800' overnight with an expected 1 to 2' of snowfall for areas above 7000' today. Higher amounts are expected along the Sierra Crest. Strong to gale force SW winds have been in the 40 to 55mph range with gusts up to 80mph over ridges. Snowfall is expected to increase into the morning and also in the afternoon hours. A brief break in snowfall is expected Friday with another storm expected Friday night into Saturday.
Click to expand... 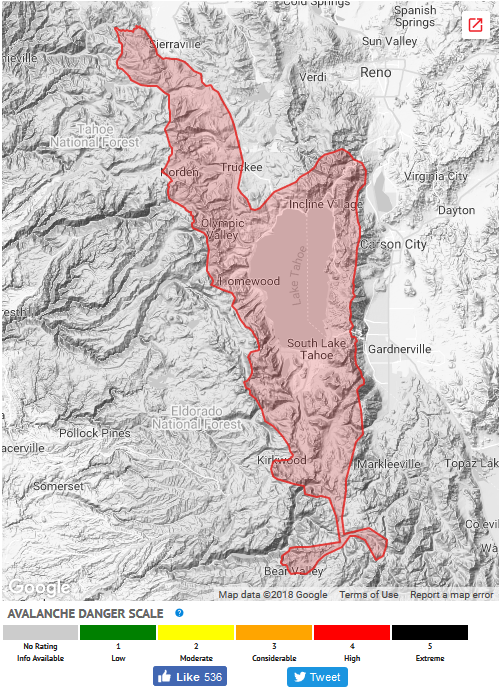 FOTCM Member
https://twitter.com/i/web/status/1073214347260895232
Precipitation - Snow Safety information
Precipitation, both rain and snow, forms and changes the snowpack throughout the winter and has a direct influence on the avalanche danger.
In short, every form of precipitation leads to a short term rise in the avalanche danger.
The following three rules apply:
Alps battered by first snow storm of season amid avalanche warnings
10 December 2018 • 4:42pm

The mild temperatures in the snowy regions cause great avalanche danger. The road between Täsch and Zermatt has been closed since Sunday night.

In the night on Monday the road Täsch-Zermatt was closed until further notice. According to the notification, the closure is due to avalanche danger./bo
Click to expand... 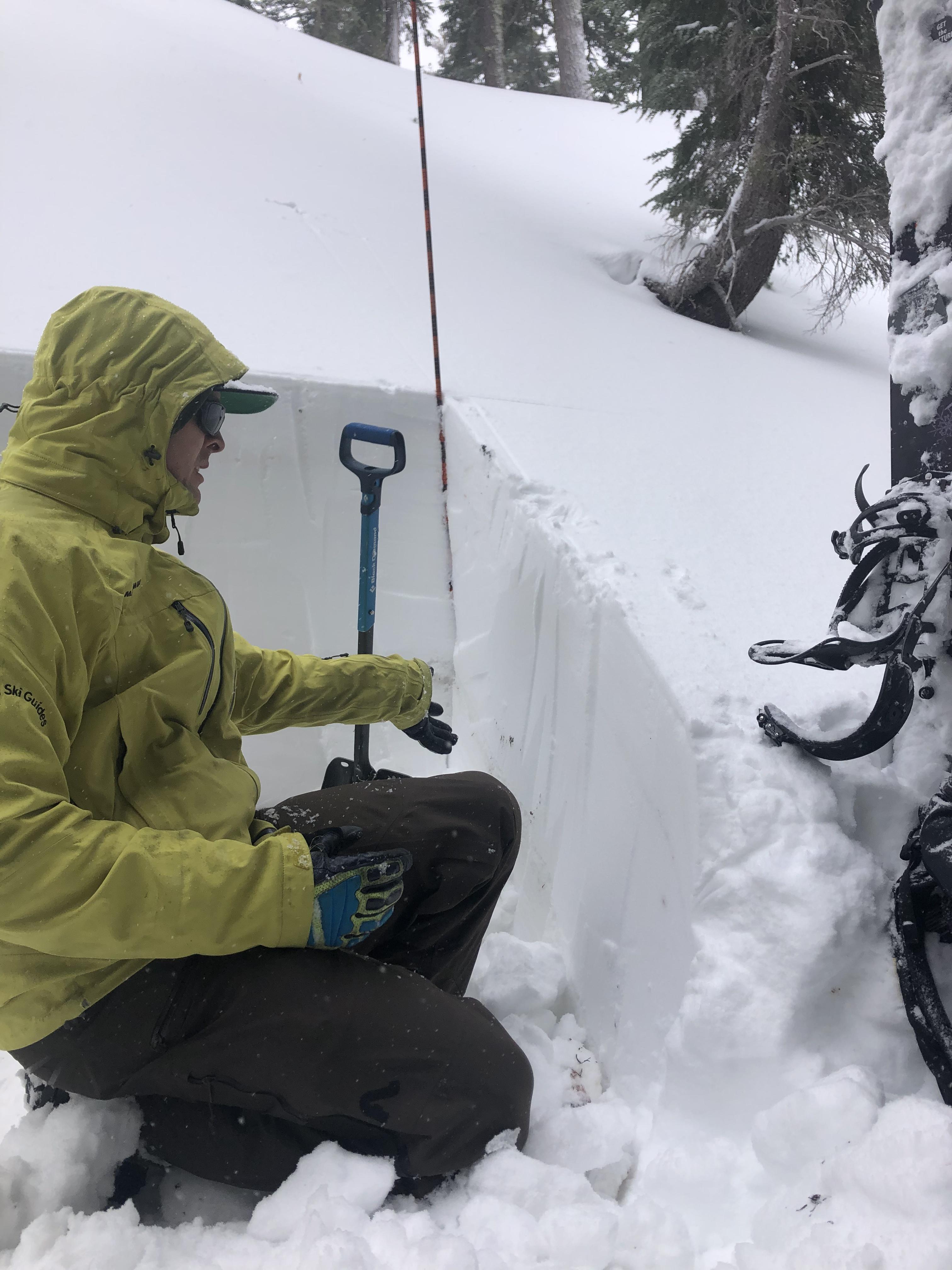 FOTCM Member
To backdrop much of the above, including the good work that North American and European associations and avalanche technicians do - which c.a. highlights above, the following is an excellent video called Avalanche - The White Death.

This is not a new film and a person can find many others online and yet, IMO, this film spells the subject out very well. This film takes one back in time (so bear with the time periods methods) in a diverse way of understanding avalanches and their properties and power. Thus the film offers perspective from a number of well know people (primarily in the US) who have had respected influence world wide. There is also a component of the science of avalanches themselves and engineering measures that many have seen and perhaps not thought about.

The film, briefly, also looks at history and how avalanches were used as a military weapon to take out enemies - it is substantial, and there is no doubt that even today it is used in these ways (think Pakistan and Afghanistan).

In the Crimea went six powerful avalanches: hundreds of people are waiting for rescue from snow captivity | The Koz Post
January 4, 2019 A
This was reported by eyewitnesses in social networks.
The so-called emergency situations Ministry in the Crimea, reports only about one avalanche, which went on the road Yalta – AI-Petri.

There went the search and rescue team, and handled problem areas.

We will remind, earlier it was reported that Russian invaders in the Crimea have once again postponed the opening of railway traffic through illegally built Kerch bridge. “Big” project is made of significant errors that are now not allowed to run traffic on the bridge.

Traffic in this area in the mountains is blocked. According to witnesses, the snow fell directly on the machine. They can’t get out and are waiting for heavy equipment.

In particular, improperly designed train approaches. It is also noted that in the railway tunnel, which is constructed in the village of October, near the archaeological site of Biela, in 2018 there was a shift rocks, which damaged the mounting of the tunnel.

As reported by the portal “Znayu” before the end of this week weather forecasters predicted the return to Ukraine of heavy snowfall and cold snaps. In particular, on the territory of Ukraine are expected heavy snow, but only in the South and in the Zaporozhye region will be partly cloudy.

Also “Znayu” he wrote that “everything is very simple. In accordance with international agreements, laws, agreements, Ukrainian military ships have the right of free passage from the Black to the Azov sea and Vice versa. End of story.

Rescuers clear road in Crimean Mountains where 300 people were trapped in avalanche
January 05, 9:29 UTC+3
SIMFEROPOL, January 5. /TASS/. Rescuers have cleared the road on Ai-Petri peak in the Crimean Mountains where 300 people were trapped following an avalanche, the Crimean office of the Russian Ministry for Emergency Situations said on Saturday.
"At 6 am, the road was cleared and reopened in full," it said in a report on the website.
It took the specialists more than 12 hours to clear the motor road hit by four avalanches, where about 100 vehicles and 300 people were trapped. Nobody was injured in the avalanches, the report said.

Rescuers remain on high alert to deal with possible emergencies and offer help if needed. Ai-Petri is the most popular winter holiday destination for local residents and guests. It has an altitude of 1,200 meters above sea level. The snow that falls in November stays until early March.


A current incoming storm will make for increase Avalanche condtions on the California Sierra NV. Mountains Range's of Lake Tahoe. 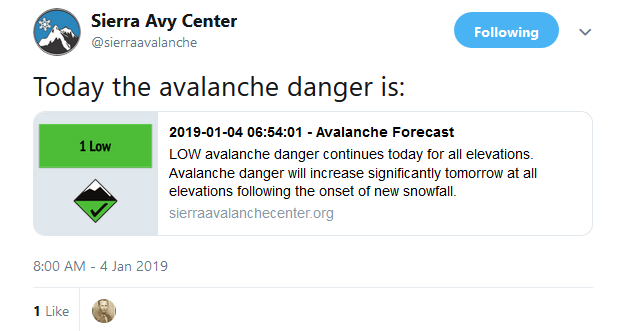 FOTCM Member
Tourengeherin (20) stirbt bei Lawinenunfall
12:45 PM - 5 Jan 2019
Ski tourer (20) dies in avalanche accident
She was carried away by the avalanche in front of her colleagues - warnings of touring upright. FOTCM Member
https://twitter.com/i/web/status/1085602867015311360
Translated from Dutch by Microsoft
Excited avalanche in Wallis. Fascinating to see how the snow cover comes to life through the pressure wave!