“The skills no longer exist to create Classical architecture”

FOTCM Member
Unfortunately, I don't know which Roman building this was or where it stood

The Romans were the great water engineers and managers of the ancient world. Throughout Syria there remain, sometimes in working order, examples of Roman water management. One type of Roman water work that is extremely abundant, and often still functional, is the Roman Cistern (Abar Romani). These are small excavated caverns, often lined with Roman hydraulic cement, that capture surface flow from the winter rains for use in the dry summer. They typically have a large stone cover to protect the water. There are at least 1115 of these cisterns in Syria. On a small road near Qatura northeast of Aleppo one such cistern sits beneath a set of Roman cave tombs and is still used by travelers.
Click to expand...

Can I chime in?
Since I researched the Olympieion in Sicily, Agrigento is on my bucket list. This walking tour video was recorded in the Valley of the Temples in Agrigento. I know it's Greek, not Roman but fantastic architecture.

bjorn said:
Unfortunately, I don't know which Roman building this was or where it stood

Must be Asia Minor.... I will have a little research.

bjorn said:
Unfortunately, I don't know which Roman building this was or where it stood

Found it. Temple of Artemis at Ephesus. Turkey.

Here is one of my favourite Roman Temples. The Temple of Bacchus in Baalbek, Lebanon.

Sybill said:
Here is one of my favourite Roman Temples. The Temple of Bacchus in Baalbek, Lebanon.

While the Romans may have done a bit of remodeling, I don't think they built the temple at Baalbek.

Some interesting items about Baalbek from an as yet unpublished MS of mine:

Again during the reign of the emperor Justinian, a great miracle took place through the fire (sent) from heaven upon the great and mighty structure of the idol temple in Baalbek, the city of paganism which in the Greek language is called “The City of the Sun”. In it there was a large and massive temple of idols, which, as people used to say, was one of those mighty constructions which Solomon had built. Its length measured 150 cubits and its breadth 75 cubits. It was built of squared stones which were carved. The length of some of them was twenty cubits and the thickness (as measured) within the structure four cubits. The construction of its building (was supplemented) with high and massive columns, wonderful moreover to see. Its roof was of huge cedars of Lebanon, and on the top it was overlaid with lead, whereas its doors were of bronze, with the rams’ heads above (them also) of bronze. Inside the nave under the entablature of the roof three cubits (of free space) could be seen. The rest of the details of that temple were wonderful (too). The erring pagans were deceived by the hugeness of that temple and boasted (of it) very much. Innumerable sacrifices, votive offerings and oblations for the demons took place continuously in that temple.

Nobody indeed was able to destroy in or put an end to the error of the worshippers of the idols within it. God however, who saw the aberration and error of the people resulting from the immensity of that temple, suddenly sent upon it fire from heaven, (which) flamed up in (the temple) and consumed it. It destroyed its beams, its bronze, its lead and the idols inside it. (The fire) also cracked its stones and the statues which had been arrayed in it for the worship of the pagan error; it even licked up the dust of the ground. Only few stones remained in it – as if a sign – being cracked by the fire. Thus a great terror suddenly came upon all the idol worshippers… and the temple burned to the point that there was fire within fire. [Snipped all the moralizing about how this was so great a sign from God that pagans were evil and so on.] (Zuqnin)
Click to expand...

Here is the version of the event from Pseudo-Zachariah which, as you will see, has been edited:

… and the temple of Solomon in the city of Heliopolis in the forest of Lebanon, as to which scripture mentions that Solomon built it and stored arms in it [was burnt]. And to the south of it are three wonderful stones, on which nothing is built, but they stand by themselves, joined and united together and touching one another; and all three are distinguished by effigies. And they are very large. … There came down lightning from heaven, while the rain fell in small quantities. It Struck the temple and reduced its stones to powder by the heat, and overthrew its pillars, and broke it to pieces and destroyed it. But the three stones it did not touch, but they remain perfect… (Pseudo-Zachariah)[1]
Click to expand...

The version from Michael the Syrian:

South of the temple of Solomon, Ba'albek, city in the forest of Lebanon, of which Scriptures speak, saying that Solomon built it and adorned it, were 3 prodigious stones above which nothing was built, they were united and stood by themselves, and adhered to each other; all three were remarkable in appearance and very large. They had been put in place as a symbol of faith in the Trinity. However, this year, lightning struck, destroyed the whole temple and turned its blocks to dust, but it did no harm to the three stones. (MtS, Book IX – Chapter XVI – Page 179)
Click to expand...

And a second entry on the topic from Michael the Syrian:

At the time of Justinian there was in Ba'albek, city of Phoenicia, between Lebanon and Sanir, a large and famous temple, and, it was said, one of those solid building built by Solomon. Its length was 150 cubits, and its width 75. It was built with fully polished stones, each of which was twenty cubits long and ten wide, and [four] thick. [We admired], in addition to the strength of the building, its pillars, and its frame made of large cedars of Lebanon and covered with lead above; doors were made of brass. Above, rams' heads made of brass, three cubits long, appeared inside the building, below each framing joist. The rest of the work was admirable. The pagans, seduced by the grandeur of the building, offered therein sacrifices to demons, and nobody could destroy it. God, to their confusion, brought down fire from heaven on it, it consumed and devoured the wood, the brass, the lead, and the idols that were there. There only remained stones roasted by the fire. (MtS, Book IX – Chapter XXXI – Page 262-263)
Click to expand...

Obviously, a lot of copying was going on. Question is, what was the original text and when was it written?

Aside from the fascinating idea that Baalbek was thought by the peoples of that time to be the Temple of Solomon – or at least A temple built by Solomon - the reference to the three large stones is interesting. As it happens, the Western retaining wall has a course of monoliths containing the famous trilithon: a row of three stones, each over 19 meters long, 4.3 meters high, and 3.6 meters across. They weigh about 800 tons each. About a mile from the site there are two unused stones in a quarry weighing 1000 and 1200 tons respectively.

But most of all, notice the description of the means by which the temple was destroyed: “fire from heaven” and “lightning from heaven”. That was either the most gargantuan lightning bolt in history or it was actually an overhead comet explosion. The fact that the author says “fire/lightning from heaven” as opposed to ordinary lightning from a cloud, suggests that it was something quite out of the ordinary and this was the best way it could be described. Of course, something may have been lost in the translation.

en.wikipedia.org
The Zuqnin Chronicle is a medieval chronicle written in Classical Syriac language, encompassing the events from Creation to c. 775 CE. It was most probably produced in the Zuqnin Monastery near Amida (the modern Turkish city of Diyarbakır) on the upper Tigris. The work is preserved in a single handwritten manuscript (Cod. Vat. 162), now in the Vatican (shelf mark Vatican Syriac 162). The fourth part of the chronicle provides a detailed account of life of Christian communities in the Middle East, including regions of Syria, Mesopotamia, Palestine and Egypt, during and after the Muslim conquest.

Laura said:
While the Romans may have done a bit of remodeling, I don't think they built the temple at Baalbek.

Some interesting items about Baalbek from an as yet unpublished MS of mine:
Click to expand... 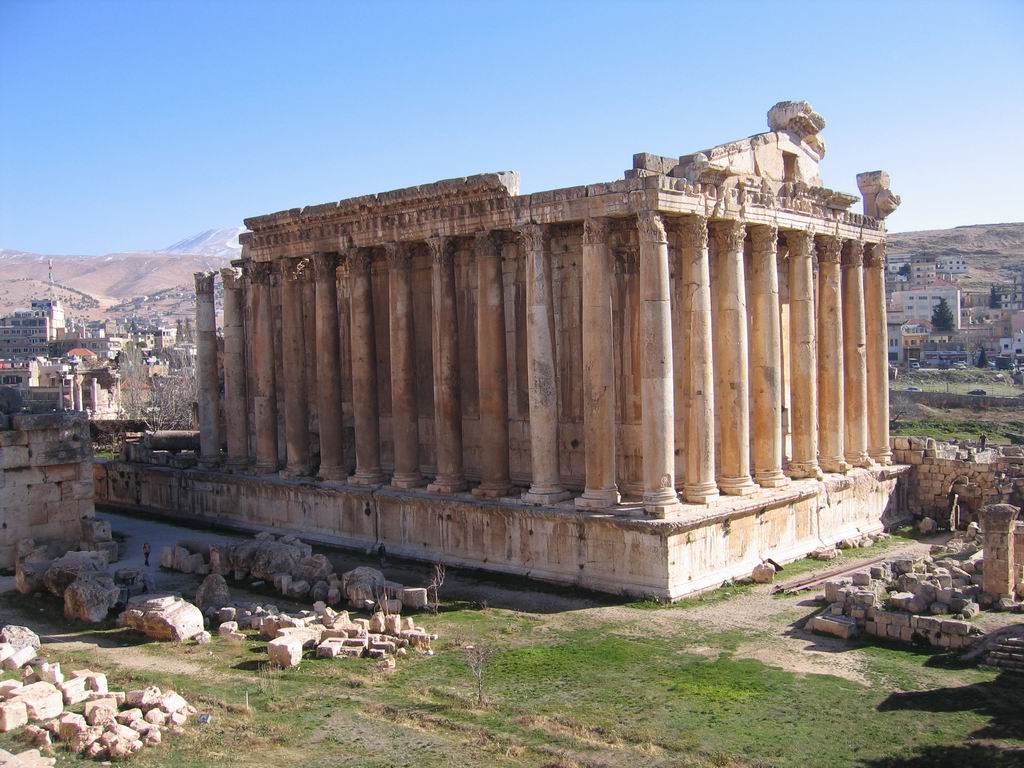 The temple was probably commissioned by Roman Emperor Antoninus Pius (r. AD 138-161). No information was recorded about the site until a 4th-century Greek conquest, by which point the temple would likely have been closed due to the persecution of pagans in the late Roman Empire. When the complex fell into disrepair, the Temple of Bacchus was possibly protected by the rubble of the rest of the site's ruins.
Click to expand...

Michael the Syrian said:
South of the temple of Solomon, Ba'albek, city in the forest of Lebanon, of which Scriptures speak, saying that Solomon built it and adorned it (...)
Click to expand...

Laura said:
Aside from the fascinating idea that Baalbek was thought by the peoples of that time to be the Temple of Solomon – or at least A temple built by Solomon (...)
Click to expand...

That is interesting and that it seems for such a large, famous, and vilified temple and structure, that the official history and official scripture doesn't give it any mention at all. Do you think it was just censored from history? And if yes, then it kind of begs to question why it was.