Fortunately, thanks for the report angelburst29, found this video that shows russian officials inspecting buildings after the earthquake ... would had been double tragedy with the freezing cold that looks over there! (village of Nikolskoye (Kamchatka Territory, Aleutian Region)

FOTCM Member
Yes, there had been more explosions registered at Nevada, around 18 explosions and too many little earthquakes in the last 20 days (november-december), last one was from today, you can check them here Nevada Seismological Lab ---still do not know what those supposed to mean, though ...

Papua New Guinea has suffered several strong earthquakes over the past several months, however, all the quakes have been registered off the coast of the island, causing no casualties or damage.

An earthquake with an initially estimated magnitude of 6.2 struck 148 km (92 miles) south of the island of Rabaul in north-eastern Papua New Guinea on 21 December, Reuters reported, citing the US Geological Survey (USGS).

There was no tsunami warning or any immediate reports of damage. The USGS later revised the magnitude of the quake down to 5.9.

In October, a major 7.0 magnitude earthquake was registered 124 kilometres (77 miles) to the east of the city of Kimbe, located in the north-eastern part of the island of New Britain in Papua New Guinea, the data of the United States Geological Survey (USGS) revealed.

There have been no reports about casualties or destruction so far.

A magnitude 6.4 earthquake was registered off the coast of the Polynesian Kingdom of Tonga, the US Geological Survey (USGS) said. The tremor was registered at 23:08 GMT on Sunday. The epicenter of the earthquake was located 52 miles to the north from the capital city of Nukualofa at a depth of 100 kilometers.

FOTCM Member
from SSN - Últimos sismos, there was a little earthquake near Guadalajara City in Mexico ... the red light I see is that, is quite near to an area well known to have fissures, like this one from 2004 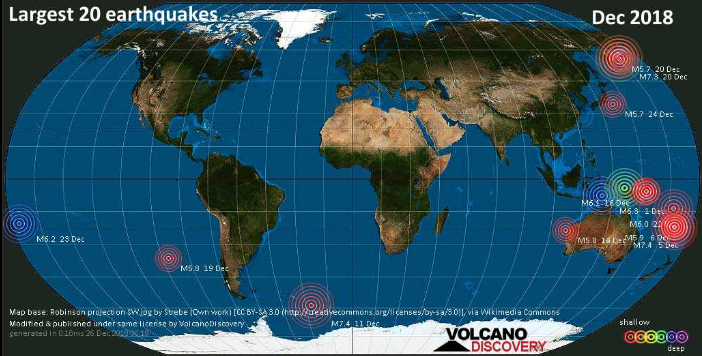 According to the surveys of the National Institute of Geophysics and Volcanology (Ingv), the earthquake has had a hypocenter only 1 km deep and epicenter near the municipalities of Viagrande and Trecastagni.

At the moment there are no damages to people or things.

FOTCM Member
There was another little earthquake on the 25 th at the Gulf of California in the +- area which is located the "deepest known high-temperature hydrothermal vents in Pacific Ocean" ... there is a volcano "recently" discovered at the +- similar area, the Alarcón Rise Weird Underwater Volcano Discovered Near Baja

According to the surveys of the National Institute of Geophysics and Volcanology (Ingv), the earthquake has had a hypocenter only 1 km deep and epicenter near the municipalities of Viagrande and Trecastagni.

At the moment there are no damages to people or things.
Click to expand...

CATANIA, Italy - An earthquake with a magnitude of 4.8 hit an area north of Catania on the slopes of Mount Etna in Sicily early on Wednesday, damaging buildings and injuring about 30 people, officials said.

It occurred two days after Etna, Europe’s highest and most active volcano, erupted, sending a huge column of ash into the sky and causing the temporary closure of Catania airport on Sicily’s eastern coast.

The earthquake hit at 3:19 a.m. (0219 GMT), prompting many people to run out of their homes and sleep in cars. It was felt strongly because its epicenter was a relatively shallow one kilometer deep, officials said.

Television footage showed damage to older buildings in the towns of Santa Venerina and Zafferana Etnea. Several of the area’s centuries-old churches appeared to suffer the most damage. They were empty at the time of the quake.

About 30 people suffered injuries, mostly from falling masonry as they fled from their homes, officials said. About 10 were taken to hospital by ambulances, the others were taken by friends and family members. None of the injuries were serious.
A People stand on the street after an earthquake was felt across northern Venezuela, in Caracas. (Reuters)


CARACAS, VENEZUELA: A strong earthquake jolted Venezuelans from their sleep early Thursday, forcing residents in the capital to evacuate buildings in their pajamas before sunrise. There were no immediate reports of casualties.

The 5.5 magnitude quake struck just before 5 a.m. Thursday (1000 GMT) and was centered near the town of San Diego, 165 kilometers (100 miles) west of Caracas, the capital. It had a depth of 6 miles (10 kilometers) and was felt across seven states, along with a 5.0 magnitude aftershock a few minutes later.

Interior Minister Nestor Reverol said there were no major damages or casualties. Photos on social media showed large cracks to some buildings and fallen walls and debris from historic facades in San Diego, a suburb of Venezuela’s third-largest city, Valencia.

While earthquakes are common in Venezuela, they tend to be less frequent and not as strong as those that hit elsewhere in South America like neighboring Colombia, Chile and Peru.

The quake follows a magnitude 7.3 earthquake in August — the country’s strongest in more than a century — that rattled residents across Venezuela and was felt as far away as in neighboring Colombia and Guyana.

There were no immediate reports of casualties or damage following the earthquake in West Papua, Indonesia, Dec 28, 2018.PHOTO: SCREENGRAB FROM USGS

A magnitude 5.8 earthquake rattled the eastern Indonesian province of West Papua on Friday (Dec 28), the United States Geological Survey said, causing nervous residents to panic, about a week after a tsunami killed hundreds farther west in the archipelago.

Indonesian authorities measured the quake at a magnitude of 6.1 and said it was "felt quite strongly for several seconds".

There were no immediate reports of casualties or damage. The region in Papua, which makes up half the island known as New Guinea, is sparsely populated.

The epicentre of the quake was on land near the city of Manokwari at a depth of 55km. The Indonesian meteorological agency said it did not have the potential to trigger a tsunami.

Last Saturday, a tsunami caused by the collapse of part of a volcano crater killed at least 430 people when waves of up to 5m smashed into the Sunda Strait between the islands of Java and Sumatra.

A powerful 6.9 earthquake has hit the island of Mindanao in the southern Philippines, the US Geological Survey reports.
The National Weather Service's Pacific Tsunami Warning System released a hazardous wave alert for all coasts within 300 kilometers of the quake, a radius that includes much of Indonesia and the Philippines.

"Tsunami waves are possible for coasts located within 300km of the earthquake center," the warning reads.

There have been no immediate reports of casualties or damage from the Mindanao quake, which hit at a depth of 49km at 3:39 UTC on Saturday.
Government agencies have been advised to inform populations in coastal areas of the risk and to instruct them on relevant evacuation procedures, depending on the threat level. The islands of Geme and Tabukan Tengah (Indonesia) as well as Davao (Philippines) may experience tsunami waves within the hour. Davao City, on the southern Philippines island of Mindanao, is home to over 1.6 million people.
...
It remains unclear whether Saturday morning's earthquake off the Philippines was triggered by the erupting Anak Krakatau volcano in Indonesia. Both countries sit on the infamous 'Ring of Fire' basin of the Pacific Ocean, where many earthquakes and volcanic eruptions occur.
Click to expand...