EgyptAir flight MS804 disappears from radar between Paris and Cairo

Another report concerning this flight

EgyptAir said on its Twitter feed late Wednesday that a plane en route from Paris to Cairo has disappeared from radar.

The airline later said the plane was travelling at an altitude of 11,280 metres when it disappeared 16 kilometres after entering Egyptian airspace, a corrected distance from earlier information the airline had sent out.

Search and rescue teams have deployed to locate the Airbus A320, the airline said
Click to expand...

They got pretty close to landing.

Some more information now from Egyptair:

The plane was at 37,000 ft and disappeared 80 miles (around 10 minutes) before entering Egyptian airspace.

Search and rescue teams are being assembled.
Click to expand...

It also confirms that contact with the plane was lost 10miles/16km within Egyptian airspace.
Click to expand...

The plane was around 3 hours and 40 minutes into its journey (that was not, as earlier reported, the total journey time) when contact was lost.
Click to expand...

Edit: There is a sort SoTT article about this now - https://www.sott.net/article/318569-EgyptAir-flight-804-disappears-en-route-from-Paris-to-Cairo-with-over-60-on-board

In a series of tweets on the incident the airline cites an “informed source” as stating that the flight, which departed Paris at 23:09 for Cairo had “disappeared from radar” ten miles out from Egyptian airspace.

The information desk at Cairo International Airport told The Financial Times it had no information on whether the flight had disappeared or not, but confirmed that the plane in question was not at the airport.
Click to expand...

Conditions were clear and calm when the plane crossed over the Mediterranean, according to CNN meteorologist Michael Guy.
Click to expand...

Ambassador
FOTCM Member
German Media reports now that 66 people were on board and not 69:
_http://www.faz.net/aktuell/gesellschaft/egypt-air-flug-ms804-aegyptische-passagiermaschine-vermisst-14240919.html

Wonder why that is? Seems to be recurring pattern in lost and crashed planes. 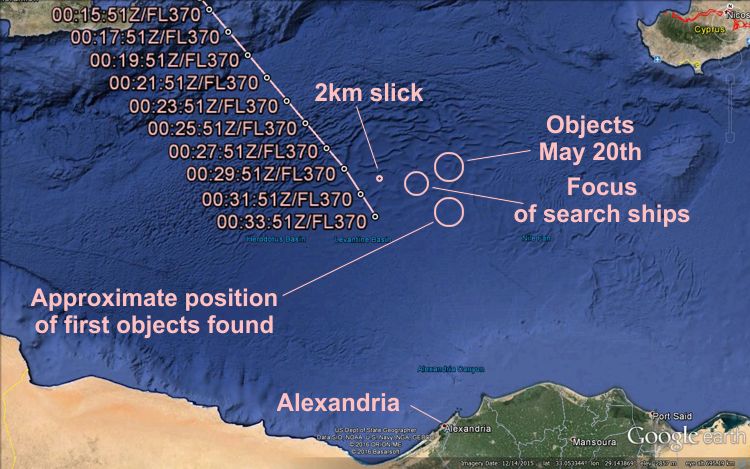 Pashalis said:
German Media reports now that 66 people were on board and not 69:
_http://www.faz.net/aktuell/gesellschaft/egypt-air-flug-ms804-aegyptische-passagiermaschine-vermisst-14240919.html

Wonder why that is? Seems to be recurring pattern in lost and crashed planes.
Click to expand...

The initial figure provided by EgyptAir via Twitter was 69, but Ahmed Abdel, the vice-chairman of EgyptAir holding company later confirmed there were 66 people on board (56 passengers, 3 security personnel, 2 cockpit crew and 5 cabin crew).


As well as amended info on the time that contact was lost, there is this update on the location:

EgyptAir A320 aircraft flight number MS804 lost contact with radar above the Mediterranean sea about 280km (175 miles) from the Egyptian seacoast at 2.30am [local time] as the flight was expected to arrive Cairo airport at 3.15am.

This is quite different to earlier reports from the airline that the last-known contact was around 50km north of the Egyptian coastline.
Click to expand...

MOSCOW, May 19 -. RIA Novosti portal flightradar24, tracking the movement of aircraft, aircraft flight showed a full route Airbus A320 airline EgyptAir until the last point of contact with him.

According to the portal, last contact with the aircraft at the time it was able to fly over the Mediterranean Sea at a height of 11.2 kilometers.

It is reported that the last contact between the missing aircraft and navigation services occurred 10 minutes before it disappeared from the radar.

MS804 flight bound from Paris to Cairo. On board were 56 passengers and 10 crew members.
Click to expand...

The aircraft was carrying 56 passengers, including one child and two infants, and 10 crew, EgyptAir said. Earlier it said 59 passengers were aboard but then revised the figure.

Greece said it had deployed aircraft and a frigate to the area to help with the search.

A Greek defense ministry source said authorities were also investigating an account from the captain of a merchant ship who reported a ‘flame in the sky’ some 130 nautical miles south of the island of Karpathos.

The weather was clear at the time the plane disappeared, according to weather reports.
Click to expand...

EgyptAir says that the plane’s emergency devices (possibly an emergency locator transmitter or beacon) sent a distress signal that was received at 4.26am, some two hours after the previously stated last radar contact.
Click to expand...


There is some confusion over this new distress signal, reported to have been received at 04.26 local time (02.26 GMT).

But it is possible that the later signal, which has been described in some reports as a distress call, could have been an automated distress signal from an emergency locator beacon.
Click to expand...


Egyptian aviation officials have told the Associated Press that the EgyptAir flight from Paris to Cairo with 66 passengers and crew on board has crashed.

They gave no further details on where the plane went down, but it was last spotted on radar 10 miles into Egyptian airspace over the Mediterranean.
Click to expand...

And some reports that it probably crashed in to the Mediterranean sea
_http://sputniknews.com/world/20160519/1039860002/egyptair-plane-crashed-into-sea.html

FOTCM Member
Since I made the grounding sheet for my bed, I've been dreaming a lot more.

Last night, I dreamt that I was at some kind of fun social gathering, like a barbecue, and one of the women there was a flight attendant. When I found this out, I jokingly asked her to give us all the safety demonstration you get before the plane takes off, and I sat in a seat and pretended to be reading the safety manual and looking at the emergency lights on the floor, etc.