FOTCM Member
Here is the framework:

So, there was a lot of wood and it's the most visited monument in Europe and they did not setup a huge sprinkler system???
Last edited: Apr 15, 2019

Administrator
Moderator
FOTCM Member
Just 1 month ago one of the most famous churches in Paris, St. Sulpice, was set on fire, eventually revealed to be arson. 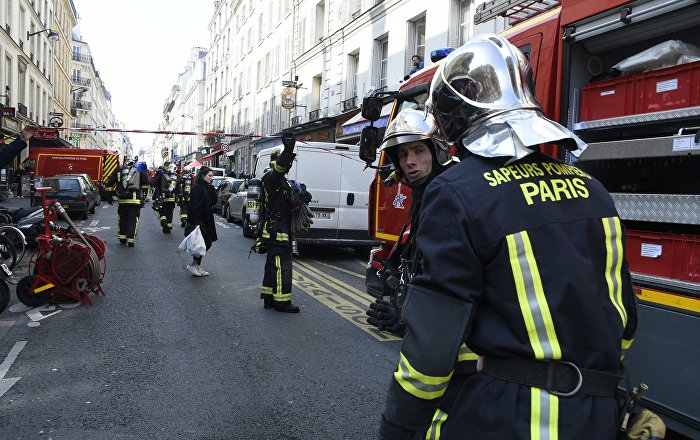 Historic St. Sulpice church caught fire in Paris on Sunday. The blaze had damaged the main door as well as an internal staircase.

Moderator
FOTCM Member
As someone commented on the Web: over the centuries, the Cathedral had survived the French revolution, wars, violent riots… but is now crumbling down because of simple renovation works.

FOTCM Member
I'm searching for the name of the company in charge of renovation works, and it seems very difficult to find so far...
And MSM are now saying that sending water helicopters (the Seine is next door) would weaken the building...

At this point and from my POV, there are a bit too much things leading to something "weird", at least...
Renovation works were estimated around 110 millions of Euros for 20 years. Now it would be billions...

It may have happened accidentally and there may have been no conspiracy taking place, but
remember, only four weeks ago there had been another major fire at another major cathedral
in Paris, Saint-Sulpice: 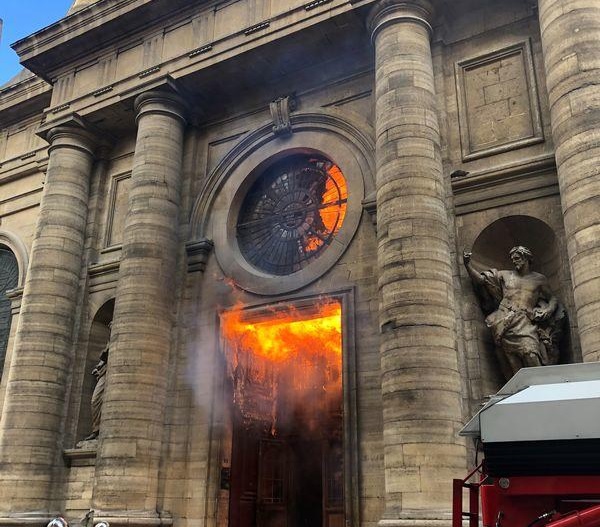 These events may actually be symbolic for the demise of Christianity in Europe.

Pashalis said:
It is. In the capital of all places one would think that all available firefighters and vehicles would be on the spot and spraying like crazy in a matter of minutes.
Click to expand...

Exactly. Anyone who is part of an emergency response system knows that per protocol, you have to be there within minutes. Firefighters usually materialize in no time. If it really took them 50 minutes to get there, that makes them among the most incompetent response team in history. No rescue system lives uncovered a main city by more than half an hour. It would be interesting to see what they have to say.

Joe said:
Just 1 month ago one of the most famous churches in Paris, St. Sulpice, was set on fire, eventually revealed to be arson.

Historic St. Sulpice church caught fire in Paris on Sunday. The blaze had damaged the main door as well as an internal staircase.

France has seen a spate of attacks against Catholic churches since the start of the year, vandalism that has included arson and desecration.

Vandals have smashed statues, knocked down tabernacles, scattered or destroyed the Eucharist and torn down crosses, sparking fears of a rise in anti-Catholic sentiment in the country.

Last Sunday, the historic Church of St. Sulpice in Paris was set on fire just after midday mass on Sunday, Le Parisien reported, although no one was injured. Police are still investigating the attack, which firefighters have confidently attributed to arson.

Built in the 17th century, St. Sulpice houses three works by the Romantic painter Eugene de la Croix, and was used in the movie adaptation of The Da Vinci Code, by Dan Brown.

Last month, at the St. Nicholas Catholic Church in Houilles, in north-central France, a statue of the Virgin Mary was found smashed, and the altar cross had been thrown on the ground, according to La Croix International, a Catholic publication.

Also in February, at Saint-Alain Cathedral in Lavaur, in south-central France, an altar cloth was burned and crosses and statues of saints were smashed. The attack prompted Lavaur Mayor Bernard Canyon to say in a statement: “God will forgive. Not me.”

And in the southern city of Nimes, near the Spanish border, vandals looted the altar of the church of Notre-Dame des Enfants (Our Lady of the Children) and smeared a cross with human excrement.

Consecrated hosts made from unleavened bread, which Catholics believe to be the body of Jesus Christ, were taken and found scattered among rubbish outside the building.

Bishop Robert Wattebled of Nimes said in a statement: “This greatly affects our diocesan community. The sign of the cross and the Blessed Sacrament have been the subject of serious injurious actions.

“This act of profanation hurts us all in our deepest convictions,” he added, according to The Tablet, which reported that in February alone there had been a record 47 documented attacks on churches and religious sites.

The Vienna-based Observatory of Intolerance and Discrimination Against Christians in Europe, which was founded in cooperation with the Council of European Bishops Conferences (CCEE) but is now independent said there had been a 25 percent increase in attacks on Catholic churches in the first two months of the year, compared with the same time last year.

Its executive director, Ellen Fantini, told Newsweek that while in many cases the motive for the attacks was not known, France faced growing problems with anti-Christian violence, especially by anarchist and feminist groups.

“I think there is a rising hostility in France against the church and its symbols," but "it seems to be more against Christianity and the symbols of Christianity.

“These attacks are on symbols that are really sacred to parishioners, to Catholics. Desecration of consecrated hosts is a very personal attack on Catholicism and Christianity, more than spray-painting a slogan on the outside wall of a church.”

She said that while France had a long tradition of secularism, it was seen as a culturally Christian country, and so any "attack on the church as a symbol of religion was also an attack on authority and patrimony.

"The pressure is coming from the radical secularists or anti-religion groups as well as feminist activists who tend to target churches as a symbol of the patriarchy that needs to be dismantled," she added.

On February 9, the altar at the church of Notre-Dame in Dijon, the capital of the Burgundy region, was also broken into. The hosts were taken from the tabernacle, which adorns the altar at the front of the church, and scattered on the ground.

Last month, the Prime Minister Edouard Phillipe met French church leaders and said in a statement: “In our secular Republic, places of worship are respected. Such acts shock me and must be unanimously condemned.”

Senior Figures within the French Catholic Church expressed their sorrow at the rise in attacks on symbols of their faith.

Last month, the secretary general of the Bishops’ Conference, Olivier Ribadeau-Dumas, told France Culture that desecration of a church was not the same as a common burglary.

“To open the tabernacle, to take the hosts and to profane what for us is the basis of our faith, that is to say the presence of Jesus Christ in the hosts is something that is terrible for us.”

Ursus Minor said:
These events may actually be symbolic for the demise of Christianity in Europe.
Click to expand...

FOTCM Member
And there was also the damaged organ and broken stained glass windows in the basilica of Saint-Denis on March 7th.

Notre Dame fire was accidental due to construction and renovation.
But, apparently there is an ongoing problem:
Click to expand...

I guess it is far too soon to make this kind of declaration that I emphasized above... 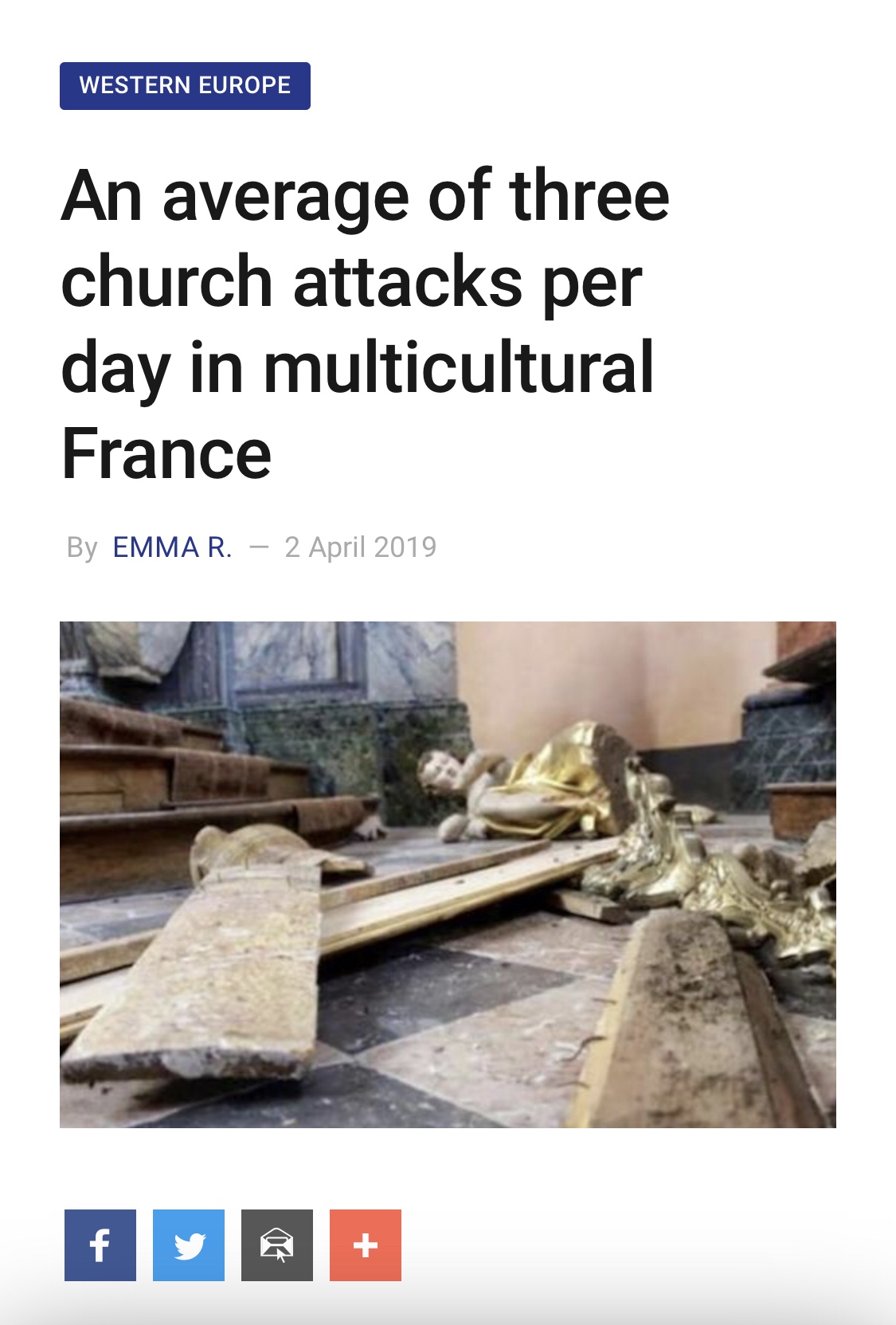 FOTCM Member
I think that is where the series of bas relief medallions, that Fulcanelli chose as his first object of exploration in Mystery of the Cathedrals, is found.

I always felt part of the soul of France is embodied in the cathedrals, and if that is accurate, it is a scary and profound symbol.

Gaby said:
Exactly. Anyone who is part of an emergency response system knows that per protocol, you have to be there within minutes. Firefighters usually materialize in no time. If it really took them 50 minutes to get there, that makes them among the most incompetent response team in history. No rescue system lives uncovered a main city by more than half an hour. It would be interesting to see what they have to say.
Click to expand...

I'm not sure conventional firefighters did not react quickly but:
- Notre-Dame is an huge building and firefighters equipment seems ridiculous for the situation. Look at the photo. Paris is a city of mild constructions as seen on the left.
- Streets around Notre-Dame are very narrow so it's not easy to have a lot of firefighters trucks in the right place.

I think that only, as someone already suggested, a quick helicopter intervention would had been effective. Is such equipment ready to take off near Paris? If not it's lake of preparation once again. Officially they say it was impossible because all the structure would have collapsed under the weight of the water.

What question me is that there was no more renovation workers at the time the fire started. But it started anyway.

StrangeCaptain said:
I think that is where the series of bas relief medallions, that Fulcanelli chose as his first object of exploration in Mystery of the Cathedrals, is found.

I always felt part of the soul of France is embodied in the cathedrals, and if that is accurate, it is a scary and profound symbol.
Click to expand...

Yes, yes and yes. And notice how Notre-Dame architecture is a kind of "twin towers".

FOTCM Member
André Finot, head of communication at Notre Dame Cathedral, tells the Parisian: "We heard the alarm sounding at 6:30 pm. An alarm that was immediately identified and recognized because we had been engaged in a fire drill a few days ago."

FOTCM Member
On last week and for ten hours, a 100-metre high crane removed one by one the sixteen copper statues - the twelve apostles of Jesus and the four symbols of the evangelists - that surround the arrow of the cathedral. Each one is 3 meters high and weighs no less than 250 kilos. To facilitate their transport, the sculptures were decapitated and suspended from the crane by the base of the neck.
Le spectaculaire déplacement des statues de Notre-Dame pour leur restauration 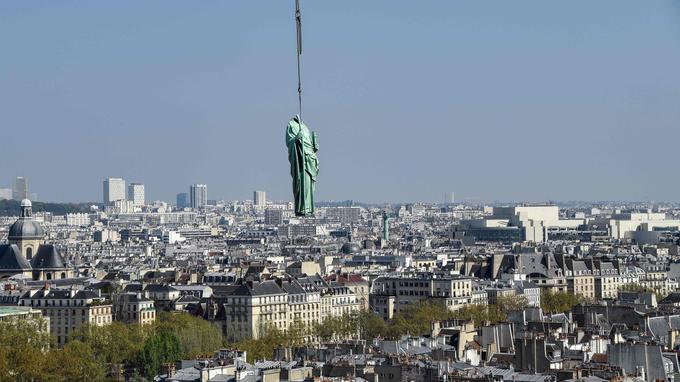 To all the priests of Paris:
Firefighters are still fighting to save the towers of Notre-Dame de Paris. The structure, roof and sag are consumed. Let us pray. If you wish, you can ring the bells of your churches to invite people to pray.
Click to expand...