Thanks for bringing up the Uranus returning to Taurus, it's even more so evident currently.

Ruth said:
This is a real tragedy. When I heard about it, the thought popped into my mind 'The Reichstag Fire' of 1933. And, I'm left wondering how the elites are going to try and spin it, apart from trying to ingratiate themselves, and exclude all possibility of challenge.

Having an interest in astrology, I also question the similarities too. Especially as it comes to Uranus and it's return to Taurus... You might call this 'interesting times'... But as yet, I have not found any astrologers focusing on this
Historic: Reichstag Fire, horoscope for birth date 27 February 1933, born in Berlin, with Astrodatabank biography - Astro-Databank
Click to expand...

Regarding Uranus and it's return to Taurus,
Going back in history of this planetary phase, we have the
1770's, American Revolutionary War for Independence
1850's The Panic of 1857, The Carrington Event (1859), lead up to the Civil War
1930's The Great Depression, World War ll

Outer planets demand that we adapt or die. In the case of Uranus the amount of lightning that strikes us depends upon how long we have been stuck in the dark and how willingly we volunteer to face the dawn. Once society and the individual openly accept Uranus in some form he ceases to arrive as anarchy, revolution or personal catastrophe. He offers instead the chance to form a world in which each one of us might move closer to true self-expression while offering something worthwhile to the group. That is going to take a long time but it seems we may be optimistic that we are not yet on the edge of the black hole.
Click to expand...

Ambassador
FOTCM Member
So, a Dutch parish in the south of the Netherlands (which is/was predominantly catholic) decided it was a good idea to organise a sound and light show the day before Easter, using the basilica as their prop. This virtual 'Easter fire' was supposed to be a 'hopeful light and a 'consoling message'. If you look at the picture you can see that there is a (fake) fire coming from the top of the building. Because many people actually feared the basilica was on fire the fire department was swamped with calls.

How deranged is this one year (almost to the day) after the fire at the Notre Dame Cathedral? 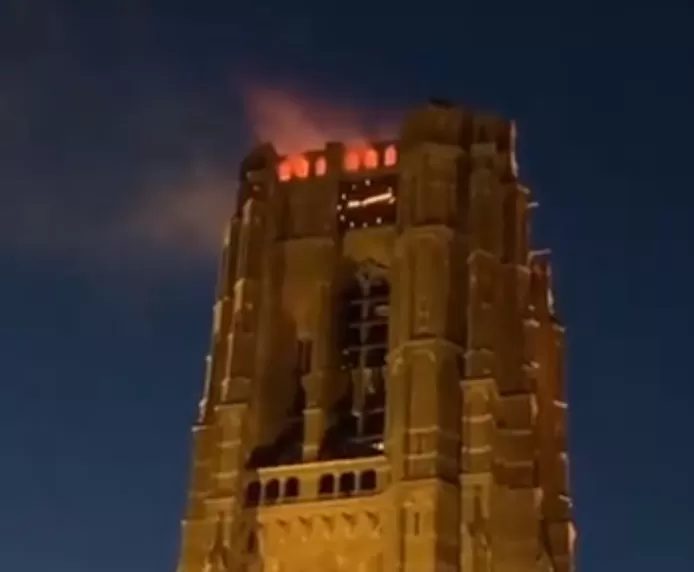 FOTCM Member
What's with the time on the clock?
A

Construction workers were back at the burned shell of Notre-Dame cathedral in Paris on Monday, resuming the mammoth task of rebuilding after the coronavirus outbreak forced a pause of a month and a half.

Builders back at Notre-Dame cathedral in Paris after coronavirus shutdown 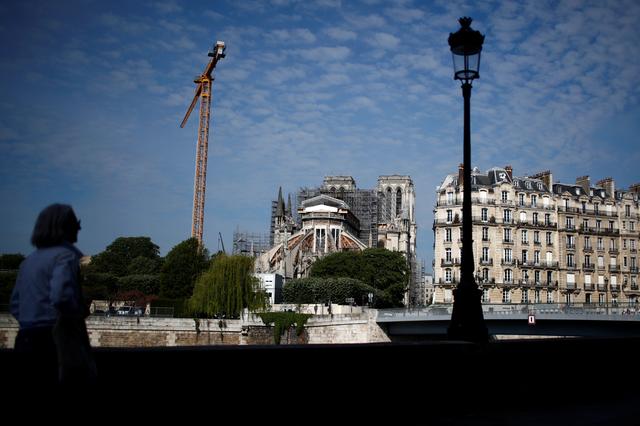 Builders back at Paris's Notre-Dame after Covid-19 shutdown 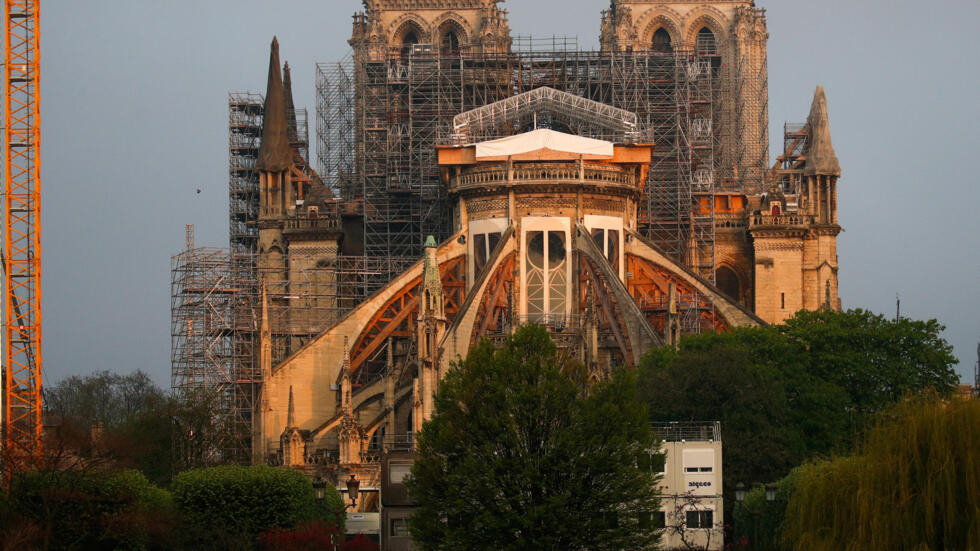 27/04/2020 - Monsignor Patrick Chauvet, the rector of the cathedral, said the work getting underway on Monday was to make the site compliant with social distancing rules so work proper could resume. He said showers for workers would be modified and changing rooms adapted to reduce the risk of infection.

"It's true that we have lost a month and a half," Chauvet told Reuters Television. But he said the project was on track to meet Macron's 5-year deadline.

That doesn't mean that all of the restoration will be completed, but it means we will be able to enter again into the cathedral."
He said the first task, once work gets fully underway, was to remove the tangle of metal scaffolding that melted in the fire and enmeshed itself in the structure of the cathedral.

Fire in Nantes Cathedral of St. Peter and Paul 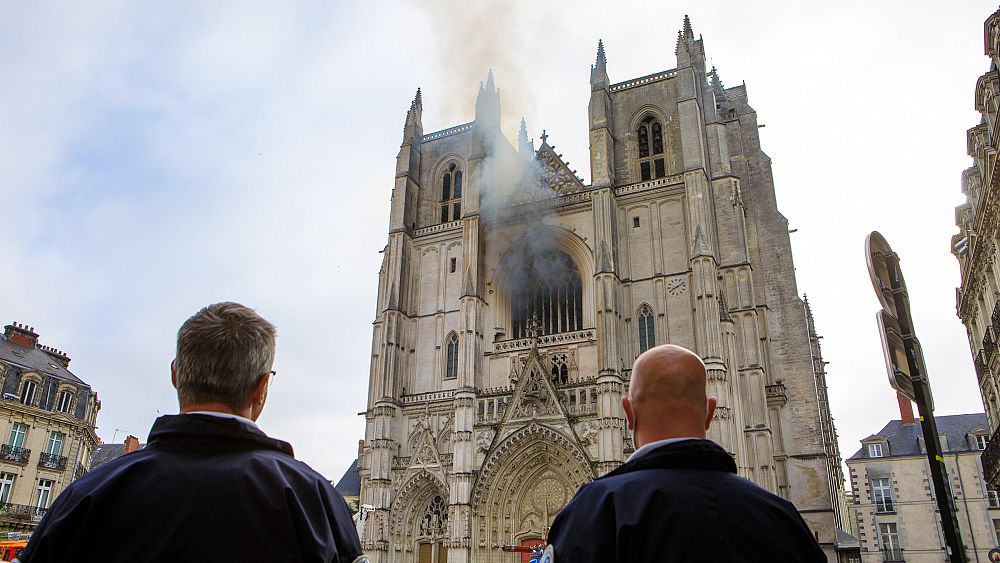 Police have released a volunteer who worked at the fire-stricken cathedral after being brought into custody for questioning.

FOTCM Member
I've just heard it and thought "Wow, not another one!". So I went checking it on the internet and came over this online piece from the German online outlet merkur.de, which summarizes what is known so far (translated from German below). The incident is being investigated for arson now:

(Note: The order of the chronology has been adapted for better work with the information.)

Nantes cathedral in flames - investigators assume arson: "This is no coincidence".

On Saturday morning, the cathedral of Nantes was on fire, resulting in a major fire. Whether the fire was set is now being investigated.
Initial report dated 18 July, 9.22am:

Nantes - A fire broke out in the cathedral of Nantes on Saturday morning. The fire brigade of the northern French department Loire-Atlantique informed the news agency AFP that the emergency services were alerted at 7.44 a.m. because of the fire. The fire is not under control, 60 firemen are on duty. "The fire is not under control, it is spreading," the fire department said. It is a "major fire".

Nantes: fire in cathedral - situation not yet under control

A video published on the Twitter channel of the French fire brigade [which is the one posted by Artem Yalovyi above] shows the blazing flames above the entrance area of the church.

On another photo you can see how the flames blaze behind a window above the gates. Clouds of smoke drift across the nave.

Numerous firefighters are on duty at the fire in the cathedral in Nantes. According to the fire department, the major fire is under control. The damage is concentrated on the large organ, which was probably "completely destroyed", said fire chief Laurent Ferlay at a press conference. Current pictures show that the blazing flames in the cathedral of Nantes could be contained.
© AFP / SEBASTIEN SALOM-GOMIS

The platform on which the organ stands is "very unstable" and is in danger of collapsing, Ferlay said. However, he said the fire was not comparable to the major fire in the Paris cathedral Notre Dame last year. It is still unclear how the fire broke out.

Jean Castex, Prime Minister of France, thanked the emergency services on Twitter. He wanted to express his solidarity with the people of Nantes, Castex wrote. He announced that he would travel to Nantes on Saturday afternoon with the Minister of Culture Roselyne Bachelot and the Minister of the Interior Gérald Darmanin to see the damage.

Investigators would visit the church during the day. One source of fire had been found near the large organ and two more on the left and right side of the nave. This was reported by the television station BFMTV with reference to the public prosecutor's office.

The cathedral dates from the French late Gothic period and is dedicated to the apostles Peter and Paul. In 2015 there was already a violent church fire in Nantes. At that time the flames destroyed most of the roof truss of the church of Saint-Donatien.

In April 2019, the fire at Notre-Dame Cathedral in Paris kept firefighters and sympathizers around the world on tenterhooks. The accident has had long lasting consequences for the Parisian landmark.

In France, in the city of Nantes, there was a fire in the Cathedral of Saints Peter and Paul. The cause of the fire is most likely arson.

investigators assume arson: "This is no coincidence"
Click to expand...

Soon after the Adama Traoré (the French George Floyd) innuendo that didn't succeed much in hystericizing the population, this criminal fire exhibits an excellent timing to worsen the manufactured tensions between the white/Christians and the colored/Muslims.
A

Fire is in the center of the Cathedral between two pillar spires - shades of 911? The Cathedral's great choir organ has been destroyed. French cathedral burns in suspected arson fire
Rome Newsroom, Jul 18, 2020 / 04:36 am MT (CNA).- A fire being investigated as arson at a historic cathedral in western France Saturday morning has been contained, according to the local fire chief, though not before the Gothic church’s great organ and rose window sustained severe damage.

Fire Chief Laurent Ferlay told French television BFM July 18 the damage to the Cathedral of St. Peter and St. Paul of Nantes “is concentrated on the organ, which seems to be completely destroyed. Its platform is very unstable and could collapse.”

Firefighters were called to the cathedral, which dates from the 15th century, at 7:44 a.m., according to BFM TV.

The Diocese of Nantes said there was also significant damage to the cathedral’s 16th century rose window and to the choir organ, French Catholic television station KTOTV reports.

The cause of the blaze is still undetermined, but the fire is being investigated as a possible arson. Presse Océan reports that according to Nantes’ public prosecutor, Pierre Sennès, the fire appears to have started from three different spots in the cathedral: one at the level of the organ, and one on each side of the nave.

The roof of the Gothic cathedral was previously destroyed in a large fire in 1971, after which the cathedral received an extensive restoration.

The Nantes cathedral was also damaged by Allied bombing in 1944.

Organ 'completely destroyed' after fire in French cathedral, treated as criminal act
(Short video) Over 100 firefighters and 45 trucks were mobilized to put out the fire which broke out at and destroyed a 400-year-old grand organ in the 15th-century building.

The alert was given by passersby around 7:45 a.m. (1:45 a.m. ET), General Laurent Ferlay, departmental director of the firefighters, told reporters outside of the cathedral. The first firefighters on site smashed the doors to enter the building in flames before ascending "via existing communications inside the building but also from outside in the air to avoid further propagation," said Ferlay. They focused on the flames around the organ, while attempting to limit its spread, and on preserving works of art. 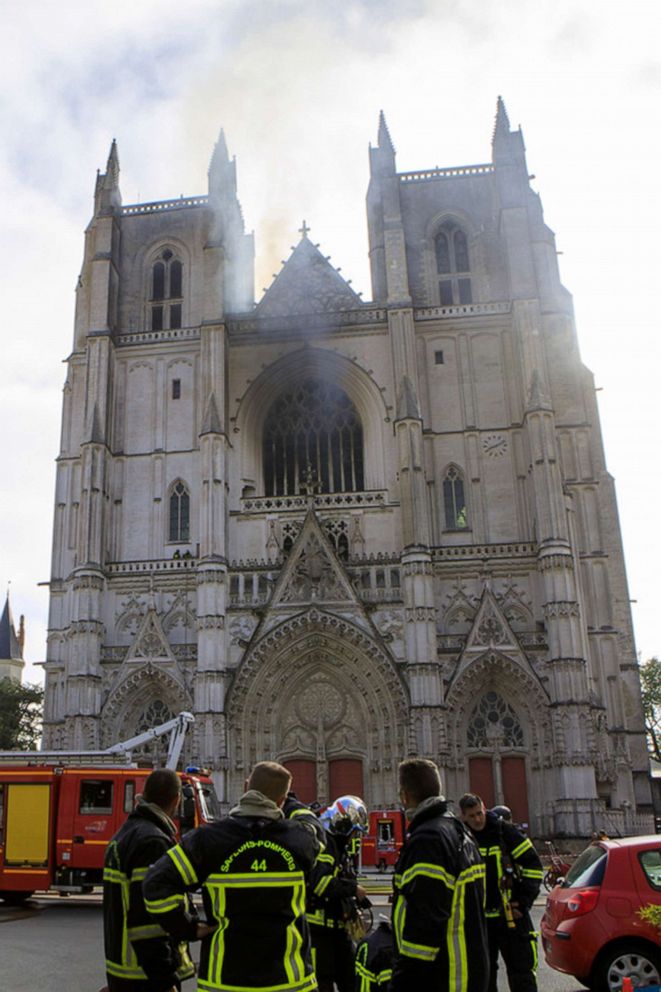 Fire fighters take a break after extinguish the blaze at the Gothic St. Peter and St. Paul Cathedral, in Nantes, western France, Saturday, July 18, 2020. The fire broke, shattering stained glass windows and sending black smoke spewing from between its two towers of the 15th century, which also suffered a serious fire in 1972. The fire is bringing back memories of the devastating blaze in Notre Dame Cathedral in Paris last year that destroyed its roof and collapsed its spire and threatened to topple the medieval monument.
Laetitia Notarianni/AP
D

FOTCM Member
And then another way to erase history, a cathedral better than a downed statue...

FOTCM Member
Another way to attack the spiritual realm of people and of a city. A Cathedral is more then stones put together. Every stone in a Cathedral was put with love and with a spirit that this work, that sometimes took more than a century, was eternal, that we in the present would be able to go and pray or feel the spirit of the Cathedral, the beauty and harmony of it, the art and messages. So trying to erase a Cathedral is a crime against humanity, against the Past, against the History and the little history of people that made the Cathedral, that gave their time, their energy to do something beautiful that was for them celestial. So imagine. 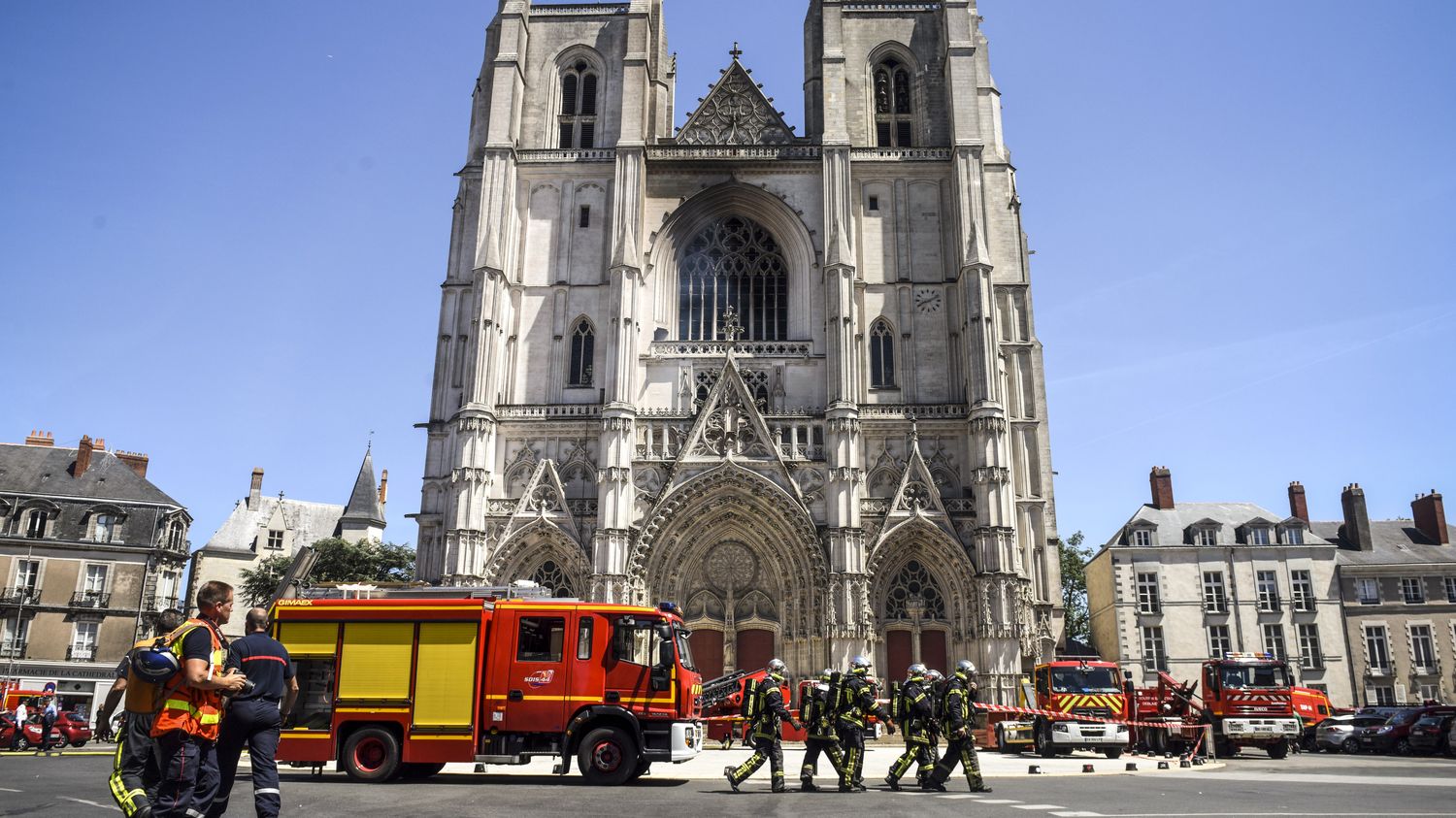 A 39-year-old man has been arrested in connection with a fire in the 15th century cathedral in the French city of Nantes that blew out stained glass windows and destroyed the grand organ, TV channel LCI reported on Sunday.

The man, a Rwandan refugee, worked as a volunteer for the cathedral and had been in charge of locking up the building on Friday night, LCI said, citing prosecutor Pierre Sennes.

Sennes said the man in custody was being held to clear up inconsistencies in his schedule.