Laura said:
(Joe) What about Seth Rich? Did we ever ask about him? The guy who supposedly downloaded the stuff from the server. It was a robbery on a street in Washington, but they didn't take anything from him.

(L) They shot him in the back.

(Niall) Was he the source for the leaks?

Q: (Joe) Was his death an assassination by the Clinton gang?

A: Interesting that the name "Podesta" comes into both cases?
Click to expand... 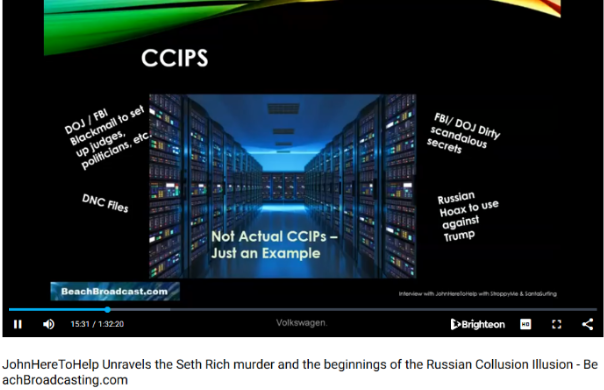 Laura said:
(Joe) I have a question about the US Air Force's request for 12 samples of Russian RNA in July of this year. They specified in a FAQ that they couldn't be Ukrainian, they had to be Russian. And Putin commented on it not so long ago in a speech. So, I'm wondering if there's some devious plan...

A: You can say that!

(Joe) The idea was that they're trying to create some kind of bioweapon that's genetically specific...

A: Unfortunately, since most Caucasians are related to Russian forebears, this is a dangerous and delusional undertaking.

Q: (Joe) No doubt! They're trying to specifically isolate something that specific to only Russians? And it's not going to affect anyone else?! Maybe some kind of airborne pathogen or something...

(Ark) It doesn't make sense! If they want DNA they can have Russian DNA as much as they want without anybody knowing it.

(Joe) That's what Putin said. When he commented on it, he said that there were people inside Russia collecting samples of DNA.

(Joe) He didn't say. And he referred to this Air Force thing. So, I don’t know. Would you need lots of samples? It's a stupid idea.

A: There are many activities at present being driven by 4D STS to further their aims of preparing a suitable population for their benefit in numerous ways.

Q: (L) So, they want a slave population, they want soldiers, they want maybe bodies that they can incarnate into themselves?

Q: (Pierre) For this purpose, they're trying to fine-tune and select the proper genetics of human beings - to design the best vehicles?

Q: (L) And all being done via their human agents who think they are doing it for other reasons.
Click to expand...

On Stalker Zone there was a translation.

The US Has Opened Dozens of Genetics Laboratories on the Russian Border: What Are They Hiding? • Stalker Zone

The US Has Opened Dozens of Genetics Laboratories on the Russian Border: What Are They Hiding?
Click to expand...

November 17, 2019 Stalker Zone
In Russia officials regularly declare the alleged danger from the United States in the field of biological weapons. American biological laboratories in countries of the former Soviet Union, such as Georgia, are of particular concern to commentators. In fact, Russians have nothing to fear yet, and officials should take an example from the United States and move from talk to action. “Lenta.ru” describes how.

In November Russian Security Council Secretary Nikolay Patrushev wrote a column listing Russia’s main security threats. One point was devoted to a policy “aimed at the destruction of a single humanitarian space and the separation of peoples”with regard to the CIS and CSTO, as well as the establishment of US biological laboratories on their territory: “of particular concern is the Pentagon’s efforts to establish biological laboratories around the world, especially in the CIS countries, where infectious diseases are studied and biological weapons can be developed.” In January of the same year, the Secretary of the Security Council claimed that the United States had commissioned more than 200 biological laboratories around the world and they were on the territory of Azerbaijan, Armenia, Georgia, Kazakhstan, Moldova, Uzbekistan, and Ukraine.

The Ministry of Foreign Affairs maintains this position. “These include US research into an unmanned aerial vehicle to distribute contaminated insects in the air as a means of delivering particularly dangerous infectious agents, various types of ammunition for small arms and light weapons with capsules with biological formulations for human infection, as well as experiments with plague bacteria capable of creating biofilms protecting against all types of existing antibiotics,” stated the Ministry in relation to the dangers of American biological weapons.
Click to expand...

FOTCM Member
Yesterday I commented on the possible use of bioweapons against Russians as US biolabs are located around the borders of Russia. This again ties in with quotes from Session 10 February, 2018: A: The objective, as we have said, was/is to eliminate true Semites from the gene pool. ... A: Central Asian genetic type formed from two main lines. And in a more recent session 18 May, 2019:
A: How do you propose that they could make it possible to destroy Christianity? ... A: It was the plan all along. Beware! It is coming to fruition and only those who stay awake and aware can navigate. The STS forces are determined to quash awareness and the possibility of seeding a new reality. The contexts in the sessions follow below:

Session Date: February 10th 2018 Laura, Andromeda, and Artemis at the board Pierre, Joe, Ark, Possibility of Being, Chu, Niall, Mikey, Scottie, Noko the Wonderdog, The Lunar Module, Princess Leia Q: (L) What is the date? It is the 10th of February, 2018. The usual suspects are here. I wonder...

A: That should be obvious by now. The objective, as we have said, was/is to eliminate true Semites from the gene pool.

Q: (L) Well... The question I have - and I'm not sure that I ever really asked it in such a direct way, or if it was ever really answered - is: What is a Semite?

A: Kantekkian and Homo Sapiens.

Q: (Artemis) Didn't they say that Kantekkians were the ones most filled with light and superpowered energies inside them?

Q: (Artemis) So they want to get rid of superpowered energy?

(Artemis) Are we Semitic?

(Joe) None of us have Central Asia in our DNA, do we?

(L) I think we all come out of Central Asia ultimately.

(L) Uh-huh! If you do all our mitochondria and stuff, you always end up there. Okay, next question?

(Artemis) Okay, I have a weird one. Are there any people living on Earth who weren't born on Earth?

A: Depends on how you define "born".

Q: (Artemis) A lady has you in her stomach... Do I need to tell you how this works? [laughter] Okay, do they mean like people who were possible experiments and who were born in other ways?

Q: (Artemis) There are people on Earth who were born in other ways and not on Earth?

Session Date: May 18th 2019 Laura, Andromeda, and Artemis at the board Pierre, Joe, Chu, Ark, PoB, Scottie, Niall, Pikabu zee Cat, Noko the Wonderdog, Princess Leia, The Lunar Module Q: (L) It is May the 18th, 2019. [Review of those present] A: Good evening children! Joyeaeia of Cassiopaea...

Laura said:
(Pierre) But when you look at history with a lot of distance, the feeling I get is that the most fundamental dynamic is that: the destruction of Christianity. And all we see today is...

A: How do you propose that they could make it possible to destroy Christianity?

Q: (L) Well, exactly what they're doing. Set up an opposition and then defend the opponent as a downtrodden minority.

(Joe) The point is that... I mean, you have in your head that there's going to be some kind of clash of civilizations, but that doesn't seem to be the point. If you look at social media today, they've gotten to the point where Christians are denounced as basically atavistic racist backward nutjobs. When they...

(Artemis) I think they want to speak...

A: It was the plan all along. Beware! It is coming to fruition and only those who stay awake and aware can navigate. The STS forces are determined to quash awareness and the possibility of seeding a new reality.

Q: (L) So you're saying that - and I guess you've said it before - that the importance of tuning the antennae of a group of people, the importance of staying awake and aware, is because you then become a receiver for creative energies?

Q: (Joe) Is it that people who have a certain awareness which is equivalent to information or ideas or conception of the world in their mind, that this contributes building blocks for a new reality?

(L) So that is basically being addressed to anybody who reads this session.

(Andromeda) It's not just surviving or enduring that's the point.

(L) It's to survive and serve others!
Click to expand...