STANGE SKY: - The strange thing was that the clouds are not dissolved, says photographer.
Photo: Gunnar Hook Beach

Translation said:
- What kind of clouds are these? Gunnar Hook Beach wonders.


Sometimes there shows up strange shapes in the sky. A resent evening, Gunnar and his wife Hjordis Krokstrand, starred at some round skies, as they drove north on the E6 highway through Dunderlandsdalen on the way home to Krokstrand in Rana.
- Never seen anything like it.

- The first thing that struck us was that the clouds looked like two large UFOs. None of us has ever seen anything like it, says Gunnar Krokstrand to NRK.no.

Gunnar went out of the car and photographed the cloud formations. When the couple arrived home half an hour later, the clouds were still in the sky - without having changed shape.

The temperature in Dunderlandsdalen, located on the south side of Saltfjellet, was then at around 17 degrees, and there was no wind.

- It was strange, usually clouds resolves quite quickly. But not these clouds, he says.


More clouds than before?


According to meteorological consultant Odd Ivar Olsen at the Weather Forecasting in northern Norway called these clouds altocumulus lenticularis, the Norwegian mandelsky or linsesky.

And that's just wind that creates these special cloud formations.

- Mandel clouds(altocumulus lenticularis) often forms above or on the leeward side of mountains or hills when the wind is blowing strongly across the mountains, says Olsen.


According to the Meteorological Institute`s Meteorology encyclopedia the air flow sets a wave in motion, and the flow of air that is pushed upward by the mountain wave is cooled, and thus quickly after the humidity to cloud droplets on the wave tops. It looks like the sky is still, while the wind blows strongly in the height of the clouds are in.

The clouds are a sign that there could be mountain waves. Since mountain waves are causing a lot of turbulence it is a hazard to aviation, especially light aircraft traffic.


Gunnar and Hjordis Krokstrand told NRK.no that there have been many special clouds to see in the sky this summer.

- It may come from it has been fluctuating weather and sometimes windy higher up with varying Cloud amount, said meteorological consultant Odd Ivar Olsen.
Click to expand...

The second looks like some sort of foam, but very fine and light - and weird. The first one... I don't know. Would chemical in the atmosphere or electricity/magnetism cause either phenomena?

The second looks like some sort of foam, but very fine and light - and weird. The first one... I don't know. Would chemical in the atmosphere or electricity/magnetism cause either phenomena?
Click to expand...

Agree, the first one seems to be foam, and weird given the location; maybe staged? The first one is rather odd, not sure though, some type of refraction bending light, but the cloud portion seems to keep jumping back and forth.

This stunning cloud formation appeared above Cumbria and looks just like a huge eagle soaring through the sky.
Click to expand...

FOTCM Member
Another - taken earlier this year in Australia

Taking pictures of the apocalypse? There's an app for that: Photographer snaps dramatic storm on his iPhone

Unusual formation spotted over the Outer Hebrides just before sunrise

These breathtaking images show an extremely rare, multi-coloured cloud hovering over a Scottish island at night.

The dazzling sight appeared over the island of Scalpay, in the Outer Hebrides, just before sunrise on December 9.

Amateur photographer Jez Wheeler was lucky enough to be in the right place to capture the perfect shots of the cloud, known as a 'mother-of-pearl' or Nacreous cloud. 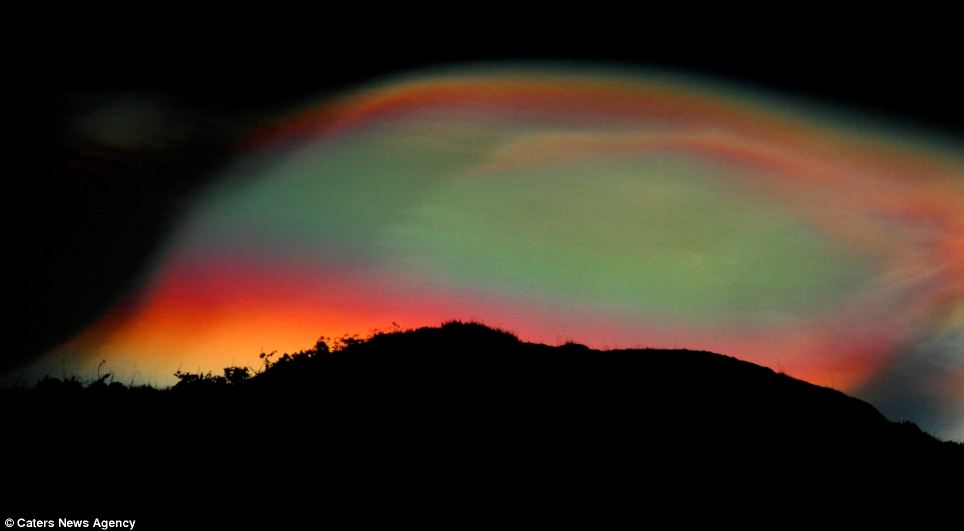 Iridescence: The mother-of-pearl cloud glows in a dazzling array of colours in this incredible image 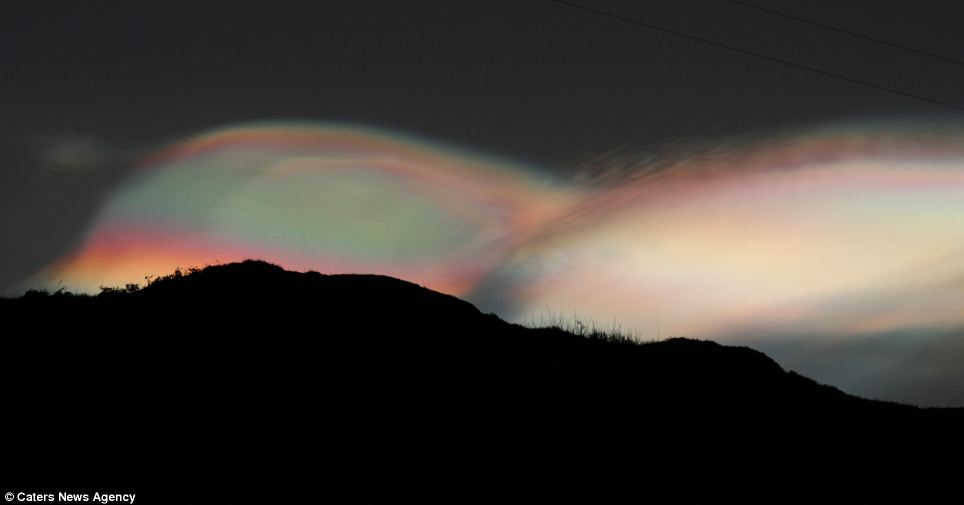 Misty mountains: The unusual cloud is often found downwind of high ground, and can signal wind or waves in the atmosphere

'I woke up early about 8.15am just to have a look outside and there it was,' said Jaz, a mink trapper. 'It was completely unexpected but I managed to get the shot. It was beautiful.'

'They are mostly visible within two hours after sunset or before dawn, when they blaze unbelievably bright, with vivid and slowly shifting iridescent colours.

'They are filmy sheets slowly curling and uncurling, stretching and contracting in the semi-dark sky.

HEAD IN THE CLOUDS?

Nacreous clouds, or mother-of-pearl clouds, form in the very cold regions of the lower stratosphere, 15-25 km (9-16 miles) high and well above tropospheric clouds.

They form when methane in the atmosphere reacts with ozone, and the reason they are so bright after sunset and before dawn is because, at those heights, they are still sunlit.

Dave Clark, of Aberdeen Met Office, said: 'It is unusual to be able to see these nacreous clouds as they are formed in the troposphere, high above our weather. They are a direct consequence of us releasing too much methane into the atmosphere and this reacts with the ozone to form chlorine clouds.

'In the past they could only be seen in the polar countries... But that is worrying because of what it signifies about increased global warming.'

'Compared with dark scudding low altitude clouds that might be present, nacreous clouds stand majestically in almost the same place - an indicator of their great height.

'They need the very frigid regions of the lower stratosphere some 15-25 km high and well above tropospheric clouds. They are so bright after sunset and before dawn because at those heights they are still sunlit.'

'They are seen mostly during winter at high latitudes like Scandinavia, Iceland, Alaska and Northern Canada.

'Sometimes, however, they occur as far south as England. They can be less rare downwind of mountain ranges.

'Elsewhere, their appearance is often associated with severe tropospheric winds and storms.

'Nacreous clouds far outshine and have much more vivid colours than ordinary iridescent clouds which are very much poor relations and seen frequently all over the world.

'Nacreous clouds are wave clouds. They are often found downwind of mountain ranges which induce gravity waves in the lower stratosphere.

'Their sheet-like forms slowly undulate and stretch as the waves evolve.

'The clouds can also be associated with very high surface winds which may indicate the presence of, or induce, winds and waves in the stratosphere.

'They form at temperatures of around minus 85C, colder than average lower stratosphere temperatures, and are comprised of ice particles.

'The clouds must be composed of similar sized crystals to produce the characteristic bright iridescent colours by diffraction and interference.'
Click to expand...

The last one in the first post is kind of creepy. Beautiful but makes me feel kind of creeped out at the same time. I have seen similar patters in my dreams and it always had a scary/negative feeling attached to it.

I don't know why, the C's have said that 4D battles were disguised as weather so perhaps this specific formation represents something that I can't really understand at this level but do at another level and don't like it. Hard to put into words but I hope you understand what I mean.

Anyhow thanks for sharing!

WOOHOO I now have 17 days off work to chase every storm, it is time to do some serious storm forecasting

Photo Taken 17/11/2012 @ 4pm @ Pampas on the Darling Downs Queensland, known to many including myself as a Very Dangerous Storm day.
~ Jeff Higgins
Click to expand...

FOTCM Member
These are a bit dated. Jan.2009. Series from start to finally. On the outskirts of Reno NV. Last one is computer enhanced for detail. This will take two post due to the size of the photo's Mb's.