Strange footprint in the snow

Sometimes, the strange <events, animals> come close to you as if to see what have you been doing :) It would be up to you to notice, because they are not going to advertise their presence...

This is what may have happened this Tuesday, in the middle of the snow storm that hit mid-Atlantic states in the US.
When the snow storm paused in the late afternoon, I walked out to the yard. Virgin snow was covering everything. I trotted to a pile of logs stashed at the back corner of the property. I will tell you frankly, my intention was to climb on the top of that pile and pee... which I did.

When I started on my way down, I have noticed a single footprint in the snow, slightly to the right of mine. It was fresh. It was so strange that I paused... I walked around the pile studying the snow cover - there was no other footprints like this leading to or from the pile! I was wearing gloves and made prints in the snow to be sure that they do not leave prints like that! They were not even close.

I tried to embed that photo into the message using OneDrive and DropBox, but failed... Can someone point me to instructions on how to do it, please?
I will provide URL here: https://www.dropbox.com/s/ehts40o9n6vfxrx/IMG_2623.JPG?dl=0

The logs are forming an improvised staircase and to climb on top of the pile I would step on every log on the way up. That footprint was made on one of the middle logs - as if the creature hopped on it with one foot and then it landed on top with the next jump. I left a large orange there, when I left for work the next morning. When I came back, the orange was still sitting untouched, buried in the fresh snow...

I posted a short video of it on youTube:
https://youtu.be/x8_nMPqvsKE

I will measure the distance between these small sticks when the snow melts. It is at least 15 cm long. We have racoons, but their prints are tiny comparing to this. Definitely not a brown bear or a large cat. Kind of monkey-like - a snow child :)

FOTCM Member
I am at a loss. I like to think I am an expert on human footprints. Not sure what this is. Bear paws are very, no extremely similar in structure to their human counterparts, but the prints are different because of the way the weight is carried. Do you have a little motion activated webcam you could put in the area? I would ask a vet.
S

I think the expert would tell whose print it is right away :)
Where can I find those experts???

SlavaOn said:
I think the expert would tell whose print it is right away :)
Where can I find those experts???
Click to expand...

No expert here, but my wild guess would be a cat like creature.

Going with a still image from your YouTube vid I did some googling and came up with the possibility of a raccoon dog (Nyctereutes procyonoides).

Don't know your location and cannot estimate the probability. If it's 15cm it would be way too big for a racoon dog.

Administrator
Moderator
FOTCM Member
Rotated and equalized the colors. There's a clear 'humanoid' heel there. Any snow monkeys in your parts?

That footprint was made on one of the middle logs - as if the creature hopped on it with one foot and then it landed on top with the next jump.
Click to expand...

In stead of a 'human-like' heel mark I would opt for a sliding mark due to speed. :P

In stead of a 'human-like' heel mark I would opt for a sliding mark due to speed.
Click to expand...

Yeah, maybe so. What looks like the calcaneus (heel) print would be in severe valgus (away from midline) deviation relative to the ray (toe) prints, as the least of the issues. Even if human would be extremely unusual, and rather alarming to have it barefoot.
S

The snow partially melted and I measured the distance between two little sticks, that are on the right side of the print. It is about 15 cm long - almost like the length of the footprint.
It was no smudged either - the heel was nice and round. 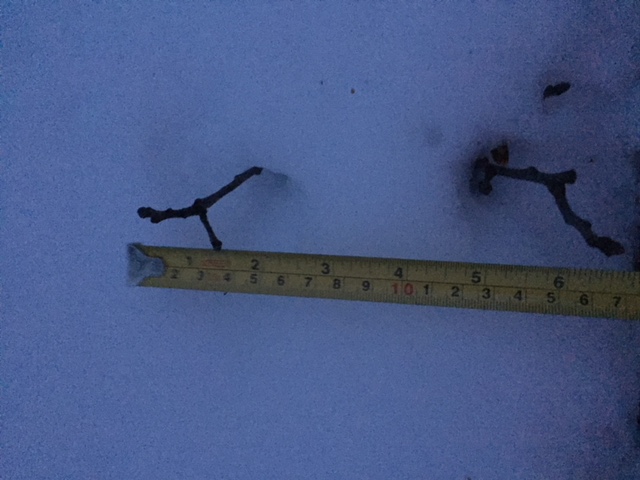 FOTCM Member
What's strange is just the one print, and its size. Looking at Joe's digitized rendition shows some detail. I was only able to find a couple of prints that looked somewhat similar. It's a strange anomalous print but it's not uncommon with those that study cryptozoology.

Interesting and thanks for sharing http://offscreen.com/view/homespun_horror
These tracks were very similar to the original tracks found by my grandfather. We did not see what made them, so we are only assuming they could have been made by the same thing or offspring.
Click to expand...

It does resemble the picture of the print for the legendary skunk ape that c.a. posted!

It is the circumstances of the print, that I found, that are so unusual. I would not even pay any attention to them if I saw them in the woods. And my house is backing up to a large uninterrupted swath of woods that stretches far North along Short Hill ridge. It is a part of Piedmont - where Appalachia mountains meet the plains of Virginia. It is a 2nd but last ridge - the 1st one is called "Blue Ridge", and the 3rd one has Appalachian trail that stretches from Maine to Tennessee. These ridges are separated by valleys from a mile to a few miles wide.

Either that creature materialized out of thin air and disappeared the same way; Or, it was bouncing from tree to tree, landed on a pile of logs and then jumped on another tree and continued on its way. Well, maybe it was hiding underneath when I was climbing atop, since the snow storm continued for a long time after that break... I did walk around the log pile and checked that there was no trail in or out of there...

Let’s go at this in a different direction, it may help. This footprint, what is it not.

It is not a cat, lion, tiger footprint. It is not a dog, coyote or wolf footprint. Here is a sample mountain lion vs grey wolf. Most of these species have similar arrangements. The main factor is the rear lobes of the paw print would be visible. This takes out a lot of mammal species with four toes right here.

What we have is four distinct, and quite large, front toes. The rear mark is not as pronounced as if it was not laid with the same force. This leads me to believe that this was a crouching maneuver to give the creature more spring up to its next step. This is reinforced by the pronounced front toe features. The toe arrangement is at an odd angle to the rear impression suggesting that it was possibly turning to a different direction during the leap. That is if this is an elbow joint that we are seeing here in this rear impression. The toe imprints are large and oversized. I suspect that this creature was highly mobile and could change direction quickly. Like a cat can chasing a mouse.

It does look to be a humanoid pattern of toes, even if there is only four of them if the rear impression is a heal. But even if this was right you would see the pad of the foot also here, with the impression forces seen here. Not human. I also look at a few bigfoot photos that had four toes on some of them. But again, you saw the foot pad.

This is not humanoid or mammalian. It is not bird-like, but it does have a birdlike representation with no foot pad, just with four fat toes.

Now I am not too sure I am seeing this right, but did this creature have claws? I see two possible claw marks that look to be turned inward to each other on toe one and two. This could be the action of the leap or the turning action causing them to turn in this way. The other two toes may have had a claw that pointed straight forward, short but centered. Like they may have been partially retracted, not used in the action too much.

This is an odd footprint to say the least. Whatever it was it was agile and could leap from point to point on a single foot. Points to a two-legged creature when you see something like this. If it was a four-footed creature it would have left at least one more footprint.

Put this all together and you have a bipedal creature that can leap from point to point with cat-like agility. It walks on its tip-toes and possibly has claws. I would suspect that it is a lightweight creature, suggesting that it may not have been too tall. The imprint is just too clean.

Have you looked for the previous point or next point of contact. It might have visible claw marks, depending on the surface. It would be interesting to see the stride of this beast. Well, that’s my two cents worth, Haiku …

I will inspect the top logs of the pile for more footprints tomorrow. Hopefully, the snow top layer will melt, leaving the parts that were stepped on intact.

I made two short videos of the 1st first print and 2 still images. I will upload them to OneCloud and will share with whoever want to have a better look.

Ambassador
FOTCM Member
Yes, it has a humanoid feel to it since there seems to be a heel, though the toughs are really big. I don't know what it may be.
You must log in or register to reply here.
Share:
Facebook Twitter Reddit Pinterest Tumblr WhatsApp Email Link
Top Bottom