Administrator
Moderator
FOTCM Member
Following Laura's idea of an infrared coffin mentioned here, we started building the contraption. It is very much like a tanning bed except that instead of generating UV lights, it generates near infrared lights.

I didn't know that we would publish such a project, so I only have pictures of the finished product. But if one of you wants to build such a device, it's not too complicated. I provided some explanations in the photo tour below and I can provide extra details if required.

First, a general view of the infrabed: 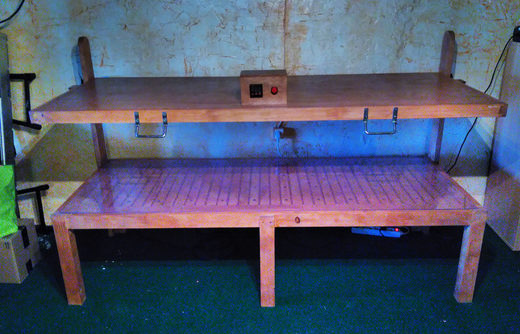 Structurally it is a bed (a frame + a board + 6 legs) to which two posts are attached. Those two posts hold the top panel.

Another general view from the side: 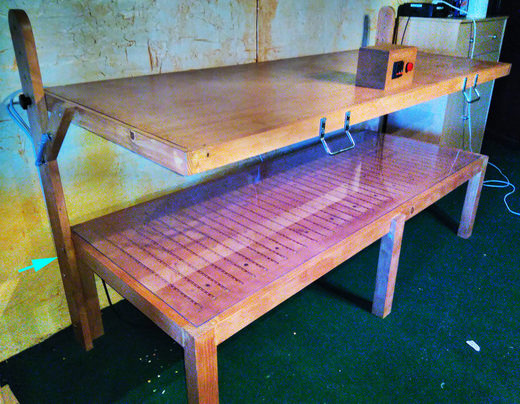 In the image above you can the the post better (blue arrow). Its section is roughly 2X4 (5cmX10cm)

To make the transportation of the bed easier the posts are just bolted to the bed frame (and not glued), therefore they are easily removable as shown by the three blue arrows in the image below: 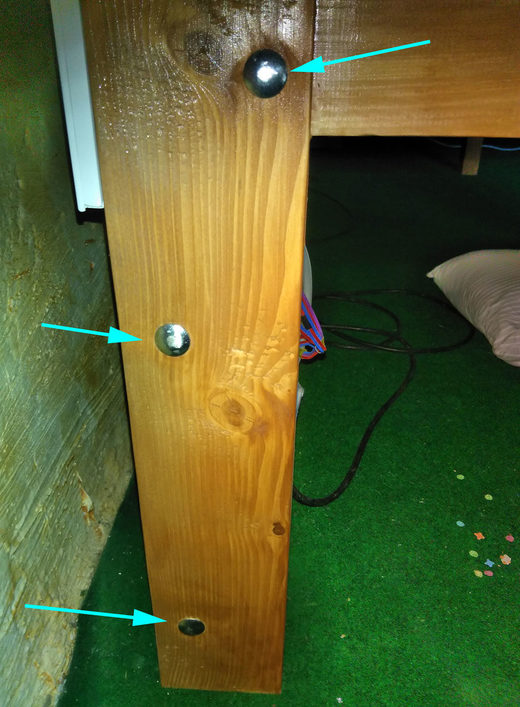 In the top half of each of the two posts, six equidistant holes have been drilled (blue arrows in the picture below). Those holes allow to adjust the height of the top panel with the knob screw (green arrow). This feature was implemented for our bed because we have people of various size, but it is not a necessary feature at all. If you design such a bed make sure the top panel is as close to you as possible because near infrared lights lose power very quickly over short distances. 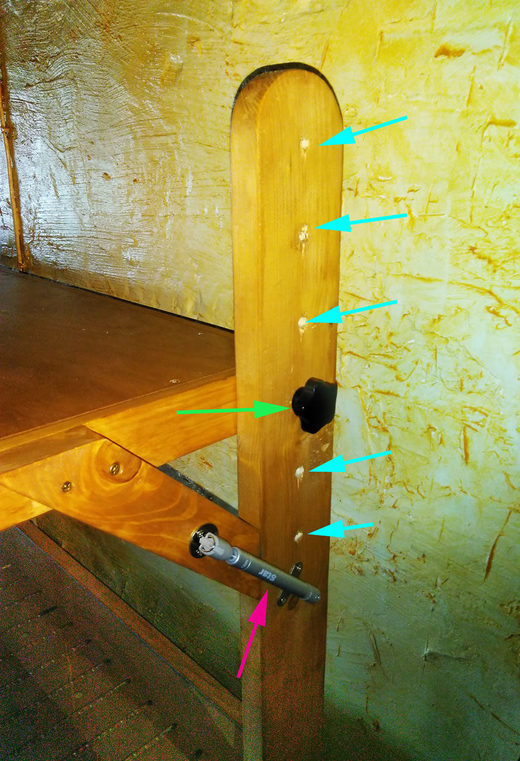 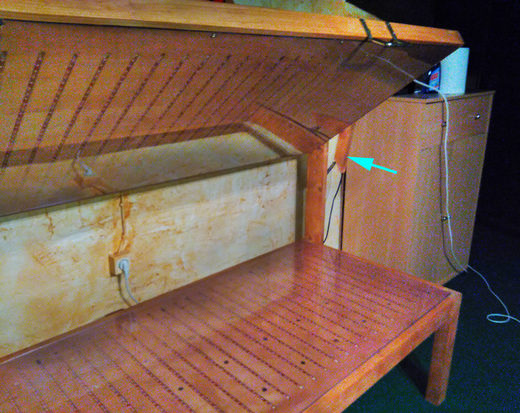 Below is a picture of the control box: 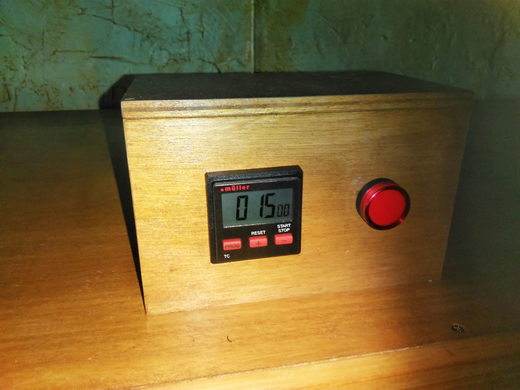 On the right is a red light that indicates that the bed is on. On the left is a timer that will run the bed for a given time. Here, it's programmed for a 15 minutes cycle.

Below is a picture of one of the two handles, which have been installed to ease the lifting/dropping of the top panel. 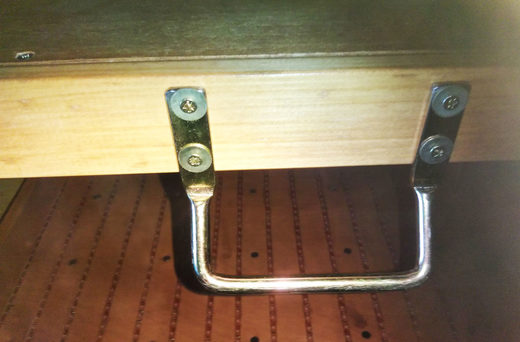 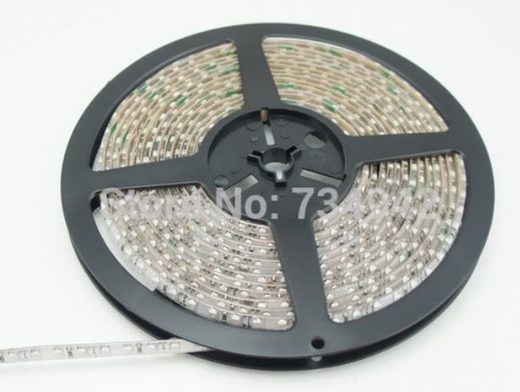 The strip come with double side tape on the back which makes the installation very easy. You can pick one of three strip colors: black, yellow, white. We chose yellow because it matches the color of the bed frame (golden oak).

In addition to the LED strips, the bottom panel is equipped with neodymium magnets (N51), see blue arrow in the picture below: 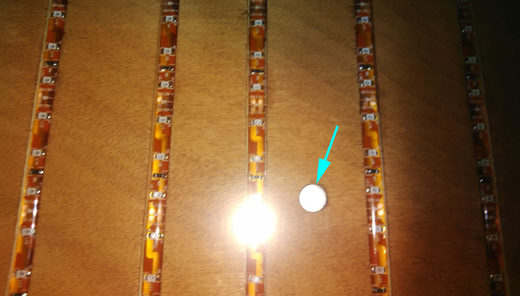 Each magnet was mounted in a pre-dilled hole and glued down with epoxy resin.

Below is a picture of the LED strip connection. At the end of each groove we drilled a hole (blue arrows). Through this hole we connected the section of LED strip to the power supply through two tiny wires that were directly soldered to the end of the LED strip (green arrows): 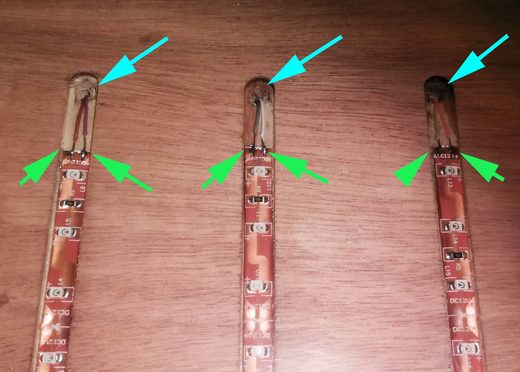 Now if we follow those tiny wires and go down the hole we end up beneath the bottom panel: 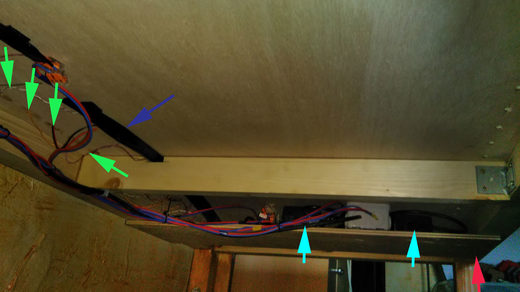 The image above shows the underneath of the bottom panel. The pairs of tiny wires are indicated by the green arrows. they are connected to the + and - rails (dark blue arrows). Those rails are, basically, stripped wires which were taped over for insulation (hence the black color) and they are connected to the power supply: two AC/DC converters (see blue arrows), one for each panel.

For convenience we installed a small shelf (see pink arrow) under the bottom panel in order to store various electrical components.

The LED strips are protected by plexiglass sheets that are mounted against the plywood panels. The top plexiglass and plywood sheets are screwed onto the top frame: 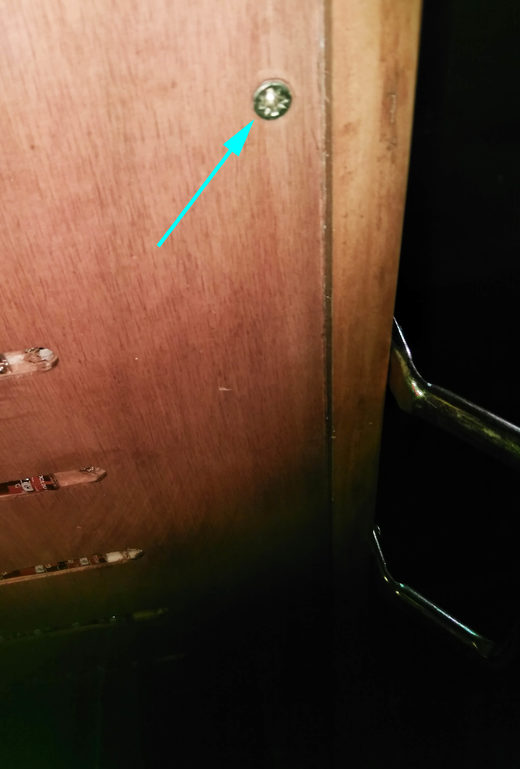 The bottom plywood and plexiglass are not screwed in place, they are just dropped into a rabbed (a kind of hedge groove) that was made all along the top inner edge of the bottom frame. In the image below, the blue arrow shows the edge of the plexiglass sticking above the frame. It's only about 1.5 mm (1/16''), while the plexiglass is 4mm (3/16'') thick: 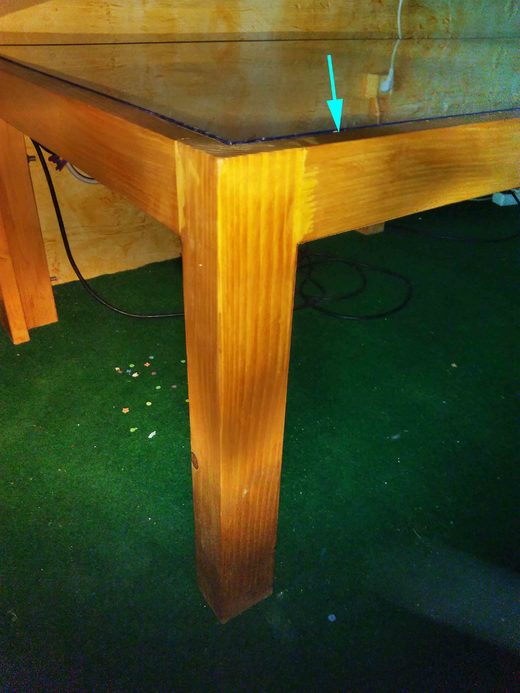 Now it's time to test the machine and see if it works. Here is a thermal imaging of the infrabed while it's off: 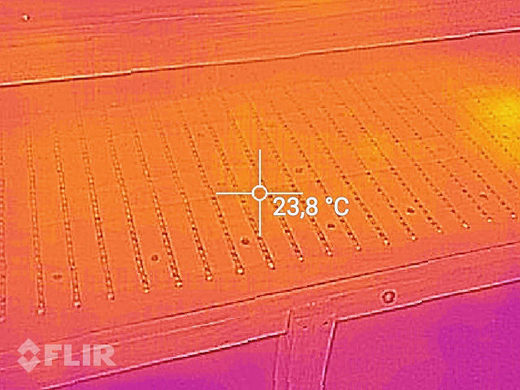 As you can see the temperature is homogeneous, the LEDs are not warmer than their environment. Below is a thermal picture of the infrabed while it's on and it's shining like a Christmas tree! So we know that all the LEDs are working fine! 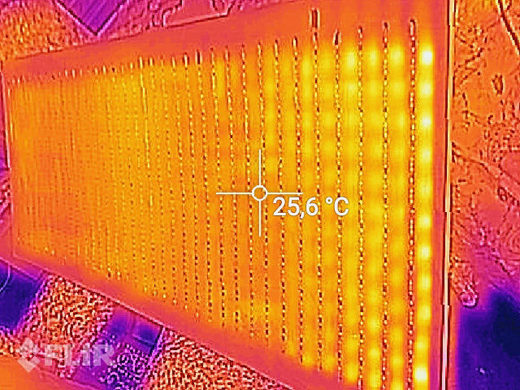 Now we are ready for instant rejuvenation, time travel and much more

Keyhole said:
It all looks fantastic

Can you imagine: 2600 LEDs massaging your whole body with their super healthy frequency

Administrator
Moderator
FOTCM Member
Just thought I would emphasize the reason for the thermal image photos; when the "lights" are on, you don't see anything and you don't really feel anything; the light is invisible and cool except when you view it with the thermal imaging camera or an infra-red night vision camera/scope.

I spent 15 minutes in it today and I do feel a bit perkier, but that's all I can say at the moment.

FOTCM Member
That is brilliant Pierre! This is a must in every home.

... just a little a kind of remark - maybe some nice soft mattress would be a plus

I was thinking it would have to be a hammock of some sort to let the FIR through.

That looks amazing! Thank you for sharing. How much did it cost to build?

Really cool and gorgeous craftsmanship as usual, thanks for sharing!

sbeaudry said:
How much did it cost to build?
Click to expand...

It is not cheap but the price per user, knowing that we'll be a bunch testing this device, is much lower.

I think it's possible to drop the price by removing the top panel: just having an IR bed (bottom panel) on which one can lay alternatively on his back and on his tummy.

Ambassador
FOTCM Member
Wow Pierre, that looks amazing! Thanks for posting about this project, I only just caught up on the new session and voila- you have already built an infrabed!! I would be very interested to see what the results are with regards to your migraines. How often do you get them and do you get any prodromal symptoms (flashing lights, visual phenomena etc)? How often would you use the bed and for how long? I am really curious to see what other health concerns the infrabed can be used to treat :)

Unfortunately that it is too much money for me at the moment...but I would like to try it just to see the effect.

FOTCM Member
Great job Pierre. It will be really interesting to hear of any health benefits from using it over a period of time. Is everyone at the Chateau intending to use it? Really enjoyed the photos and descriptions.

Now we are ready for instant rejuvenation, time travel and much more
Click to expand...

Just did a quick internet search and found this Pain-X Infrabed Light Therapy Bed for $24,950.00!