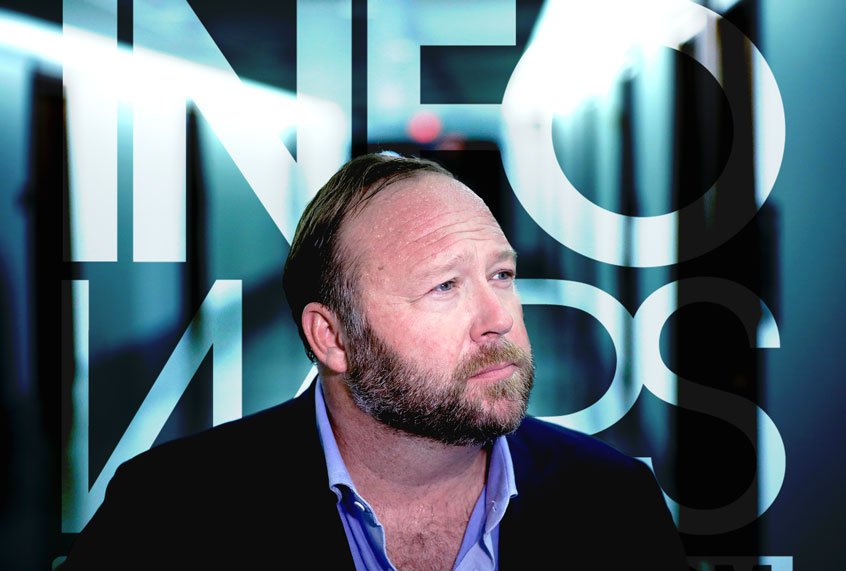 Ex-Infowars editor on "sharia law" reports: "We made it up"

Jones is such a fraud, plus he has a very chequered past. Infowars is purely a limited hangout for people who think they know what's going on, always playing on old fears and prejudices. I first became aware of Jones when his Bohemian Grove expose appeared in the UK media through a documentary by Jon Ronson. I thought he was unhinged then and I still do now. Sure, some of his stunts have raised a chuckle in me, but mainly I come away thinking that he generally does far more harm than good.

Well, he's stuck in his online ghetto now due to his being banned on Youtube. I just hope that people can see through him, though given the way his followers are it's a slim hope.

I regularly listen to Jones at times. When I watch it, I always have in mind that he is wrong, but also if he is right. And there are things I just don't believe outright. When he's saying things early on with little facts, I often think that 'what if he is right this time', or 'this time'. And the same is true for other people who frequent his show. Mike Adams for instance, can be more extreme than Jones, I think.

Reading the article posted by Laura also has my interest, and while no one is perfect, if the article is correct overall, that doesn't bode well with me. But it is not like I think he did all the things the article mentioned, because I can't know that for sure, but I want to find out. I can accept his outbursts, fighting games or walking around without a shirt, but I can't accept if he is killing animals or making conscious lies for views.

I found this snippet on ilsamberg with Joe Biggs and Josh Owens:

I also found the article "REPORT: OBAMA’S TERROR CELLS IN THE U.S." It mention's ilsamberg saying it is located near the reservoir that supplies most of New York City’s drinking water, and that "In fact, most of the compounds are near strategic locations within the United States designed to affect a mass population event at anytime."
-https://www.infowars.com/obamas-terror-cells-in-the-u-s/

Overall, Alex do say whatever is on his mind regarding any news and theories of his, often in a direct way, it seems to me, that can be interpreted as ideas or conscious lies, so I am a little uncertain of that. Yet he says things as they are fact before the facts have sprouted or he really believes in them, but he does change his mind, I have noticed. Perhaps that's because he wants to present the extreme ideas and thus incite fear as a sort of high - which can be entertaining, knowing that you know you don't believe him or it is not entertaining to those more serious. But I haven't watched enough or checked facts to know how much he is right about things.

SlipNet said:
Infowars is purely a limited hangout for people who think they know what's going on
Click to expand...

True. And these people dont see beyond their ego and they are negative in their outlook. They enjoy to see others spewing hate so they feel good about their own inner vitriol.

“The blinds stuck, so he ripped them off the wall. A water cooler had mold in it, so he grabbed a large knife, stabbed the plastic base wildly and smashed it on the ground,” Owens wrote. “Once a co-worker stopped by the office with a pet fish he was taking home to his niece. It swam in circles in a small, transparent bag. When Jones saw the bag balanced upright on a desk in the conference room, he emptied it into a garbage can. On one occasion, he threatened to send out a memo banning laughter in the office. ‘We’re in a war,’ he said, and he wanted people to act accordingly.”

In one incident when Jones wanted to “blow off steam,” the crew drove to a ranch outside Austin, Texas, to shoot guns.

“He picked up an AR-15 and accidentally fired it in my direction,” Owens recalled. “The bullet hit the ground about 10 feet away from me. One employee, who was already uncomfortable around firearms, lost it, accusing Jones of being careless and flippant … [Jones] claimed he had intentionally fired the gun as a joke — as if this were any better.”

During another incident, Jones “walked into my office shirtless,” Owens said, which he described as “normal.” Jones then proceeded to instruct another employee to hit him. The two repeatedly punched each other in the arm. “On his last hit, the sound was different. Wet. I thought I could hear the meat split open in the employee’s arm,” Owens recalled. “Jones roared as he punched a cabinet, denting the door in. A few weeks later, I heard that Jones had broken a video editor’s ribs after playing the same game in a downtown bar.”
Click to expand...

He seems stable... wouldn't suprise me if it's all true. Guy has a temper to say the least.

bjorn said:
He seems stable... wouldn't suprise me if it's all true. Guy has a temper to say the least.
Click to expand...

Definitely a temper... nobody can rage like Jones can.


I felt like looking up what Jones was up to nowadays. Apparently, just the usual.

FOTCM Member
These videos are hilarios! Thanks for the good laugh. This is the first time I’ve ever thought Jones was funny.
He should be nominated for an Oscar.

SummerLite said:
These videos are hilarios! Thanks for the good laugh. This is the first time I’ve ever thought Jones was funny.
He should be nominated for an Oscar.

He is literally the human equivalent of Cartman.


Jones actually brings up points that are valid, but he delivers it like a charlatan.

FOTCM Member
Will leave it with this: